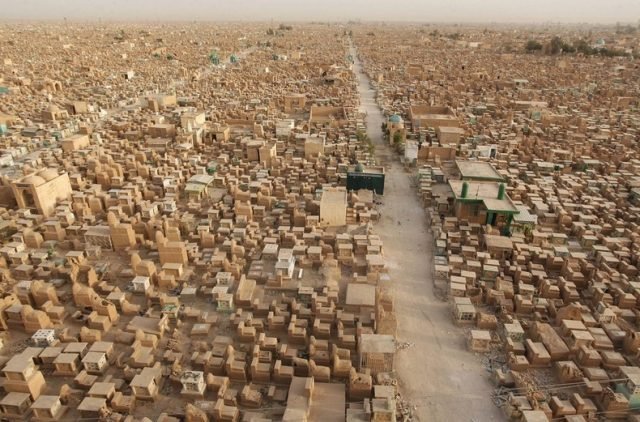 In the holy city of Najaf, Iraq, an Islamic cemetery known as Wadi Us-Salaam lays claim as the largest in the world. Burial at this hallowed ground has been a religious rite for well over one thousand years. Millions have been laid to rest across a crowded, but expansive 1500 acres which occupies nearly 30% of the city.

Increased violence over several decades has accelerated the rate of burials at an alarming rate. More recently, the crooked maze of paths between tombs has been used by combatants to hide and ambush opposing forces, bringing the conflict to the Shi’a holy ground. Why is this burial ground revered, and how did it become so large? 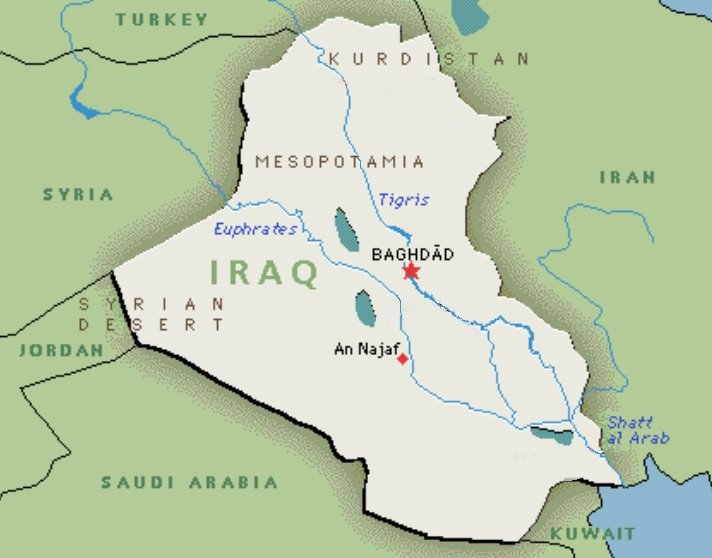 Near modern-day Mesopotamia lies Najaf, a holy city situated several miles west of the Euphrates River. A Najaf dates to the 8th century when the city was founded as a shrine to Ali ibn Abi Talib. The Shi’a denomination of Islam regard Ali as the first Imam and consider his descendants the rightful successors to Muhammad.

According to Shi’a theologians, Imam Ali feared his grave would be desecrated by enemies and thus asked to be buried secretly. It was later revealed – and today still widely accepted – that Ali is buried at the Imam Ali Mosque in Najaf. It is said Ali decreed the location to be the entry to Paradise itself.

Wadi Al-Salaam translates to “Valley of Peace,” a reference to the land’s holy considerations by Ali. The Imam Ali Mosque Shrine in Najaf is considered by Shias to be the 3rd holiest site in Islam. 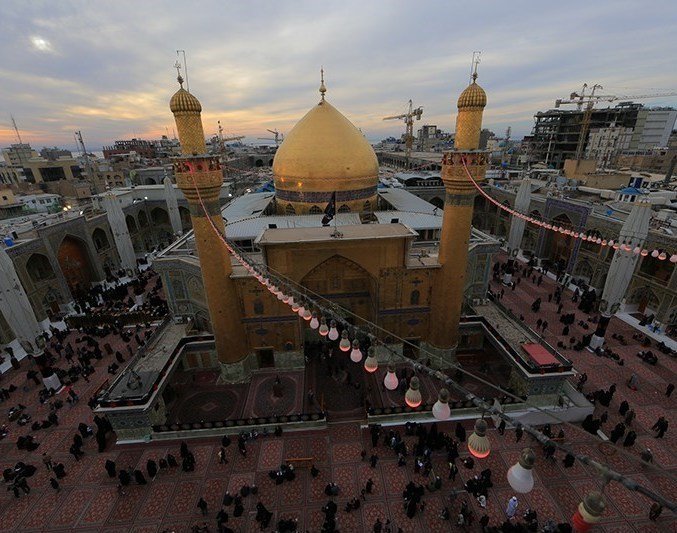 The cemetery itself is the second-oldest in Islam; only Al-Baqi’ of Madinah, Saudi Arabia is older. The site is however notable as the oldest “open” cemetery in the world, accepting new burials for nearly 1,400 years.

As the burial site of Ali and other prophets, the importance of Wadi Al-Salaam is well known throughout Islam. It has been said that the souls of all faithful men and women shall be moved there, no matter where their bodies have been buried. The population of Wadi Al-Salaam has grown into one of the oldest undisturbed graves of Muslims in the world. Over the centuries millions of Shi’a have been buried near the holy shrine to Imam Ali, and the rate has only accelerated in the last ten years. Today it is estimated 500,000 people are interred each year.

The cemetery covers 1,485.5 acres, spanning nearly 20% of the city of Najaf. The tombs vary in condition and size based on the era and class of the individual buried.

As space reached a premium, burials moved downward. The subterranean vaults can usually be accessed via a ladder, but those buried underneath others don’t always have above-ground markers.

The land is no stranger to conflict, but increased violence over the last 100 years has forced the government to try and preserve the burial ground.

In 1966, the 64th General Endowment Act was passed in an attempt to curb the violence taking place around Najaf. Additional laws were passed in 1999 further insulating the holy land and increasing the scope of outlined protection. 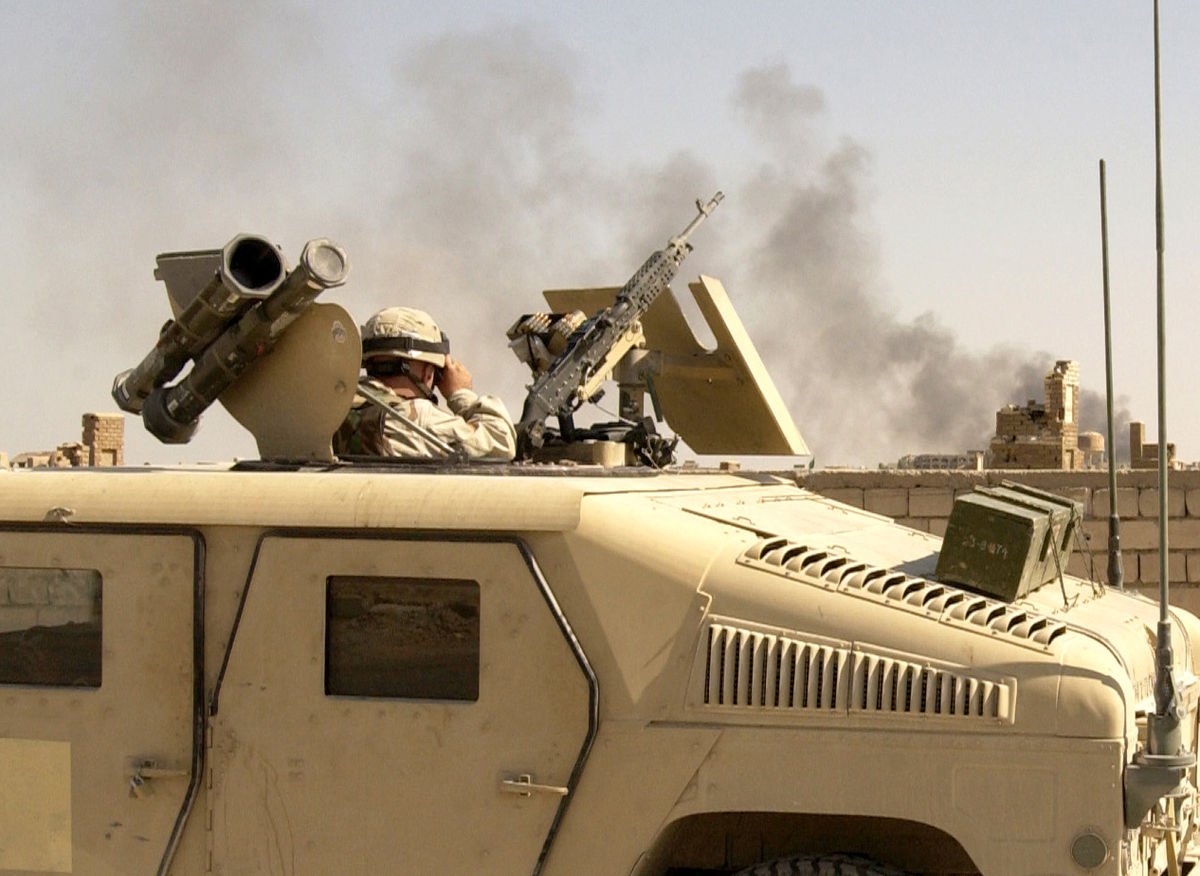 Regardless, the cemetery has been the site of many significant battles in recent history. During the Iraq war in 2003, the militia frequently used the grounds to hide and ambush approaching enemies. The rebels would take refuge in the maze of crowded tombs, but the Iraqi army just bulldozed its way through the grounds without regard. 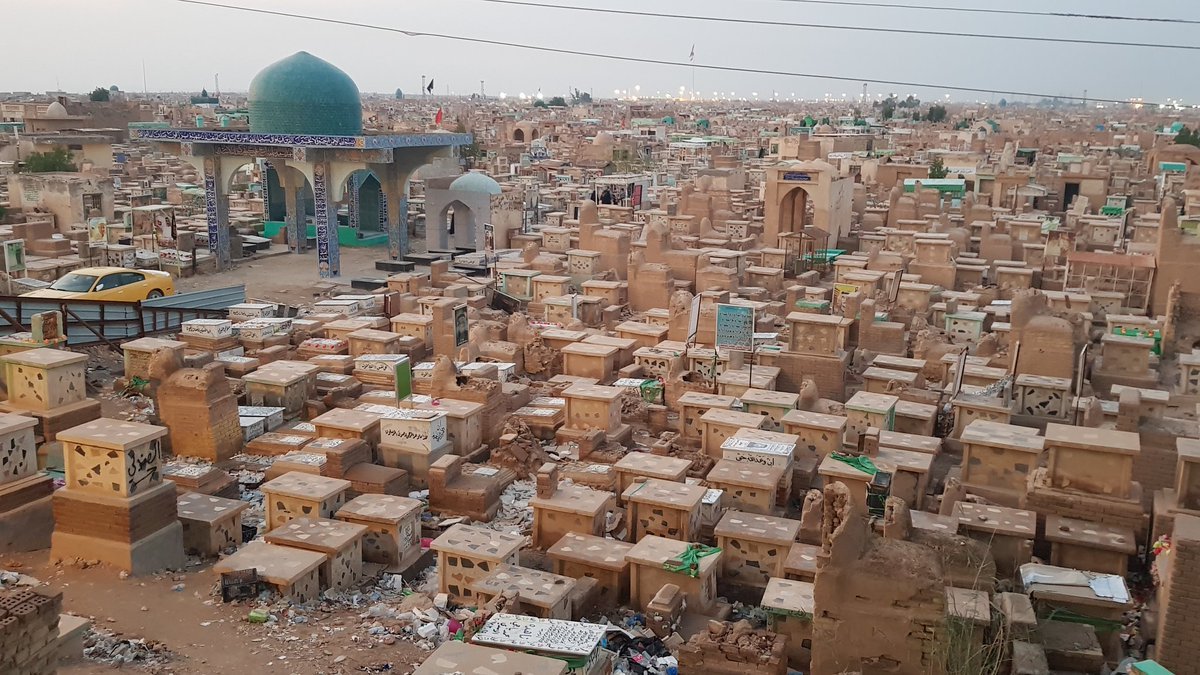 “This Valley of Peace is part of Heaven and that there is not a single one of the believers in the world, whether he dies in the East or West, but his soul will come to this Paradise to rest. As there is nothing hidden in this world from my eyes,” Maula Ali (‘a) went on to say, “I see all the believers seated here in groups and talking with one another.“