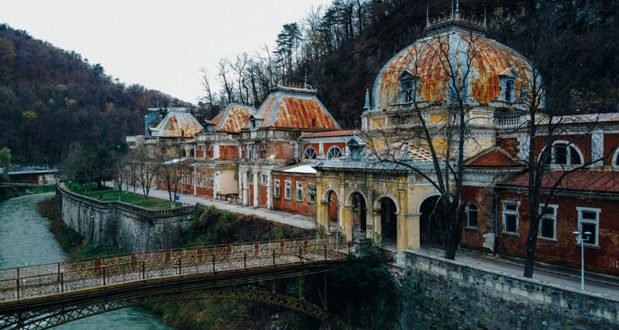 If you traveled between the Mehedinți Mountains and the Cerna Mountains of Romania, you’d come across Băile Herculane. Băile Herculane is a small historic town, home to one of the oldest resorts in the world. Legend has it that the great Roman hero, Hercules, once came to the town and bathed in the warm sulphuric springs, which are still believed to have healing properties.

The many statues of Hercules found throughout the town suggest that his presence has been significant to its past residents. But it’s the famed thermal and sulfur springs that truly set this town apart.

The Romans first began developing the natural hot springs back in 153 AD, when members of the Roman aristocracy would frequent the town for the healing waters. Over the years, the resort has undergone elaborate construction as people returned to Băile Herculane for rest and relaxation—or at least the nobles of the ruling class did. In 1852, Emperor Franz Joseph even called Băile Herculane “the most beautiful resort on the continent.”

The most significant developments were made in the 19th century, specifically between 1883 and 1886, when the Austrian imperial baths were built. The bathhouse known as Băile Neptun, named after the Roman god of the sea, was once a magnificent spa resort. But, after having been abandoned for hundreds of years, it is now a dilapidated ruin. Before its demise, however, it was a vibrant resort that attracted a lot of tourism under Romania’s communist rule. Hotels were constructed during this time to accommodate the growing tourism.

The Man Behind the Design

The architect behind Băile Neptun, Alpar Igna, created a monument to a bygone era, and now the images captured in the wake of its decay are both haunting and beautiful. Designed with a neoclassical interior, the sulfur and thermal baths consisted of 32 individual cabins and two large pools built of red marble. The grand reception hall is decorated in fine detail, with incredible colors and a ceramic fountain in the middle. While some of the rooms have deteriorated badly, this room has remained relatively preserved.

The fearless urban photographer, Roman Robroek, found his way into the abandoned buildings and took pictures of the state of the bathhouse in 2019. It is through his lens that we can marvel at the absolute beauty of the place. You could easily imagine what the buildings could have looked like in their prime.

Robroek said of his discovery, “In the resort, Roman origins are present throughout the building. For example, plaques dedicated to Hercules, Aesculap, and Hygeia (protective gods of this place) can be found.” While the Băile Herculane is closed to the public—and definitely a safety hazard—these pictures may have been the last remaining memento we have of this forgotten monument to the past.

What is Being Done to Preserve the Bath House?

The bathhouse and surrounding structures were said to be beyond rehabilitation-only a few years ago. Although, as a heritage building, people believed the government should restored it with the help of financial aid. The fact that it’s on land divided between two private owners, even while the building belongs to the city hall, has been an issue of concern and ongoing legal disputes.

A few brave archeologists have been fighting for the baths in the hopes that they can change its fate. Between the collapsing walls, plaster, and ceilings, it was becoming a matter of urgency for them to get in and begin the restoration process.

And so the NGO, Herculane Project, was launched to save the historic building complex, as reported by the BBC. A team of about 25 volunteers, including architects and students, has already raised around €75,000 as of early this year. The team has estimated that they would need about €12 million to fully restore the buildings.

They have managed to gain access inside the complex and have started saving vital sections that were under threat of being destroyed irrevocably. So far, they have added 12 sections of roofing, erected structural supports, and protected various interior and exterior relics.

“This building needs constant maintenance,” says Oana Chirila, one of the architects responsible for setting up the NGO. Their goal is to have a fully restored, functioning spa in the future.

While there are other fully operating spas in Băile Herculane, none can compare to the magnificence of the Băile Neptun. To experience Băile Neptun as visitors to the bathhouse were meant to enjoy it would be an honor to any future tourist.