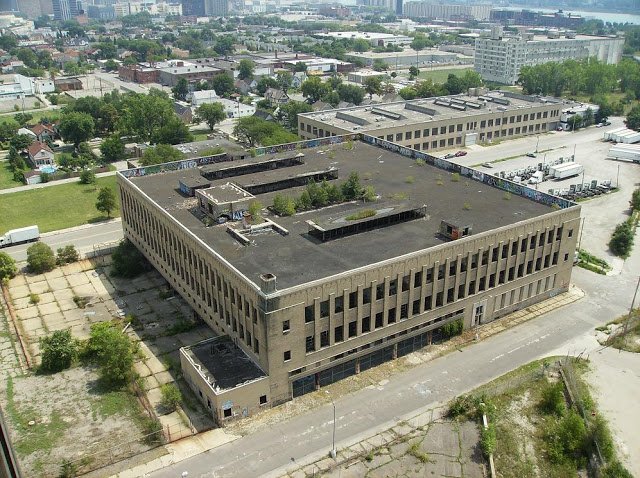 The abandoned Detroit Public Schools Book Depository sits on 2230 Dalzelle Street, quiet yet screaming with questions. Designed by architect Albert Kahn and constructed in the early 1900s, the building was originally used as a post office before it was converted into a giant stockroom for the city’s public school records, books, and other supplies. In 1987, a fire razed the warehouse and ravaged certain areas but none so desolately as its precious contents.

In a move met with heavy criticism, the building’s new owners fled the property as quickly as the fire wrecked it, never to return for anything – not even official school documents that dated more than a century back, or books and supplies that remained pristine in their original packaging as wanderers would later unearth.

The building remains where it always stood, on Detroit’s oldest extant neighborhood, only now it’s densely vandalized and gutted of interior metals.

Of far greater value than any property lost to the fire are pieces of living literature that building owners had dismissed with bold, unrestrained abandon. A tour of the building instantly reveals a creepy, wondrous charm unique to its pillaged interior.

Damp and musty air, floors padded with carbonized and decayed paper, collapsed metal shelves, and piles of educational materials are reduced to waste as thousands of Detroit schoolchildren remain deprived and starved of them.

To this day, the former book depository is an iconic museum of wasted knowledge, not as a casualty of profundities like divergent ideals or social systems, but of brazen negligence.

Even after the purchase by the Moroun family, the warehouse stayed open to lookers and the homeless. Its fence and side entrance were riddled with holes and the elevator shaft was left wide open. And while the new owners had received a permit to demolish it in 2001, the building is untouched to this day.

Home of the Homeless and the Story of Johnnie Redding

Over two decades since the fire, a man broke headlines after getting stuck at the bottom of the building’s flooded elevator shaft, frozen. His name was Johnnie Redding. A group of curious explorers first encountered the corpse as they played ice hockey in the basement but chose to ignore it as did homeless people who regularly congregated in the warehouse.

There are at least 20,000 homeless people in Detroit, with most shelters offering no more than a chair that’s automatically reassigned as soon as it is vacated. Holding onto a chair has become the daily grind for thousands of the city’s vagrants. But for a time, the home was the former Michigan Public Schools Book Depository, even if they shared it with a frozen body whose legs stuck out like popsicle sticks with shoes.

It wasn’t until a reporter acted on an anonymous tip that news of the corpse officially reached authorities. Soon, grim pictures of Redding’s dismembered body, the result of extrication efforts with the aid of chainsaws, flooded the media.

Since the reporter published his first story on the ill-fated former factory worker, countless spins had emerged online, especially in blogs and blog commentaries that attempted to unsnarl the tangle that was Redding. Initially thought to be homeless, the 59-year-old’s brother passionately refuted the speculation, saying Johnnie had “too many places to live in,” including the Holcomb family home where he grew up and a sister’s home in Georgia.

Homer Redding said they saw each other on Johnnie’s birthday in 2009 as he was heading on out to party. It was also around this time that his body was found in the neglected warehouse.

Like everyone else, including investigators, the Reddings are still clueless as to how Johnnie ended up in the abandoned building. Why it took at least 24 hours and three emergency calls for the Detroit Fire Department to respond, is also as much a secret as the Detroit Public Schools’ failure to recover heaps of intact, usable books and supplies that somehow escaped the blaze.

The Cause of Death

Of course, what happened to Johnnie is another riddle. Was it murder? Murders were quite rampant on this side of town. Perhaps he drank himself to death or tripped down the sinister-looking elevator shaft.

The coroner eventually ruled cocaine overdose as the cause of death, but only one thing was clear: the frozen man sparked a controversy that marked the advent of tighter security around the once free-for-all property.

In 2018, the long-deserted former book depository and train station in Detroit’s Corktown neighborhood were transferred from the Moroun family to Ford Motor Company, which had been eyeing it both as part of a new urban campus. While the Morouns were predictably mum on the properties changing hands, Ford was more vocal about its agenda of establishing its presence in Detroit.

Before the transfer, Ford’s technology and electrification crew had moved four blocks east of the train station in a facility called The Factory, which would become the nerve center of the automotive giant’s self-driving and electric vehicle departments.

Industry experts cited the possibility that the Morouns still had a stake in ownership, but this wasn’t your ordinary scenario unless it came with a tax advantage.

Today, Ford has closed all access points to the area, except for a tunnel that runs below 15th Street from the warehouse to the train station, which had once come in handy for the city’s postal service.

Before the sale to Ford, the Morouns came under fire for leaving the property to rot instead of investing in it through their years of ownership. But that’s just another question in the arsenal of truths, half-truths and blatant lies that make the abandoned Detroit Public Schools Book Depository a running mystery.