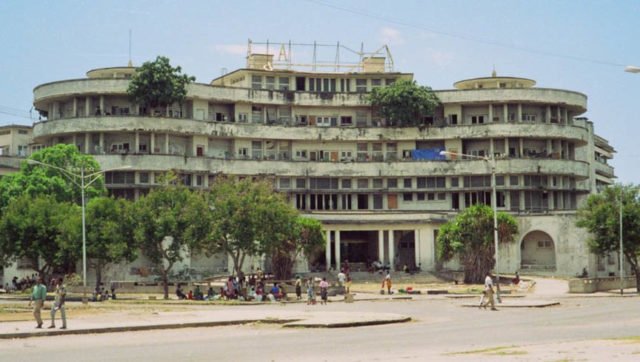 Beira is an important African coastal port and the second-largest city in Mozambique. In the mid-1950s the ruling Portuguese Estado Novo regime wanted to build luxurious oceanfront quarters for VIPs visiting Beira. The result was the Grande Hotel, a beautiful Art Deco resort opened in 1955.

When completed it was the pride of Africa, featuring every amenity available – but it would close in 1963 after only eight years of operation. The Grande Hotel would serve many functions over the years, but in 1981 it became a refugee camp and remains one to this day.

The Grande Hotel was indeed grand, at the time billed as the largest and most exquisite hotel on the continent. With 116 rooms, an Olympic-sized swimming pool with cabana, and multiple attended elevators, the hotel brought a class to Beira the city had not previously seen.

The hotel’s architecture is not native to Beira; it reminds residents of the city’s Portuguese roots, where Art Deco design was popular in the 1930s and 40s.

This design of purposeful over-consumption would also prove to be the hotel’s undoing; the construction cost nearly three times the approved budget and the size of the hotel’s daily staff kept operational costs high.

The hotel did not turn a profit in eight years of operation. 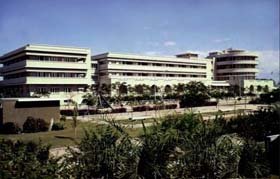 A perfect storm of circumstances worked against the hotel. The first obstacle was perhaps the biggest: Beira is an industrial port tucked in the corner of Africa; it was not viewed as a resort destination to Africans, much less international travelers.

Also working against the Grande Hotel was its price. Locals could not afford to stay, and foreigners who had the means preferred to travel to more attractive destinations. 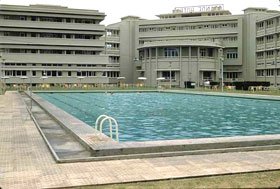 Although the hotel was initially conceived for governmental use, Portugal’s ruling party rarely traveled to Beira.

Foreign diplomats and VIPs who were guests of the state weren’t charged to stay at the Grande Hotel, further complicating any chance of being profitable. 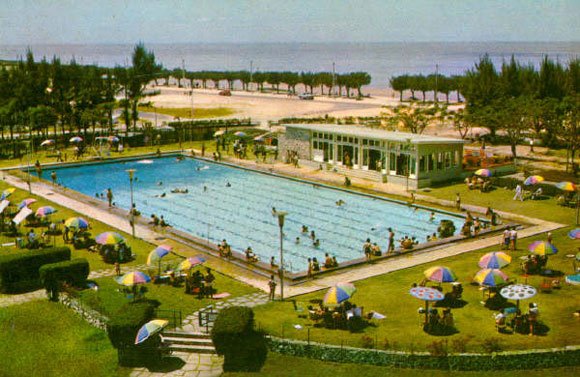 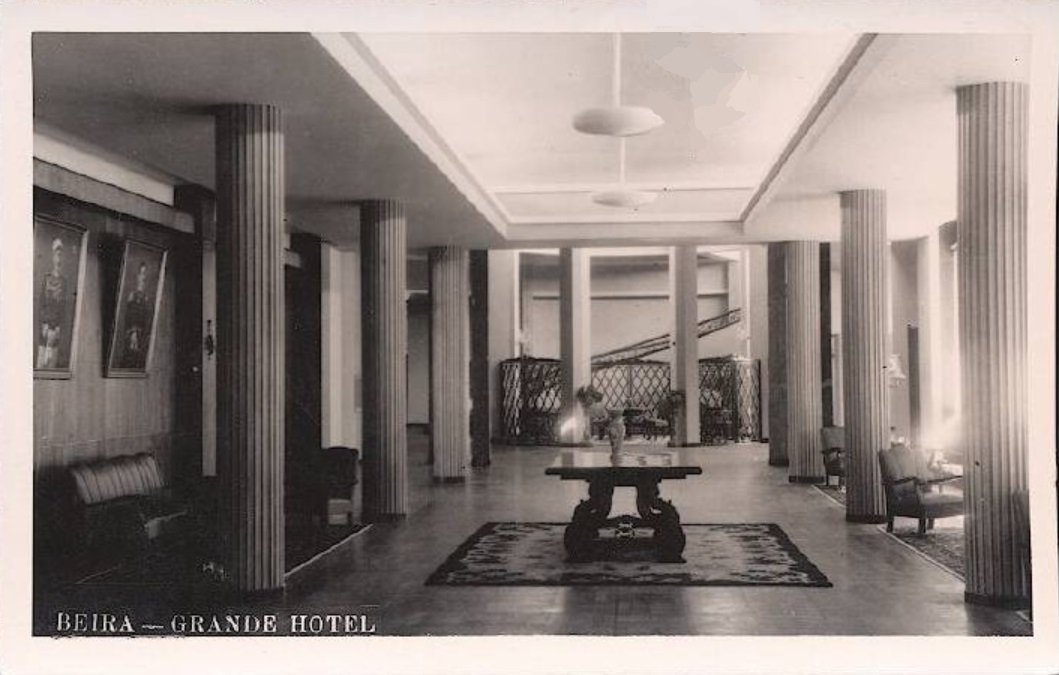 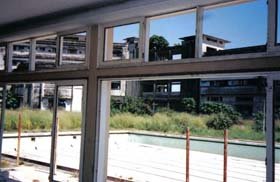 The hotel closed in 1963 but would continue to serve the community in various ways. The pool remained open and was the training ground for the Mozambican Olympic swimming team.

In the late 1960s the hotel was temporarily re-opened to serve as a residence for visiting United States Congress members. The Grande Hotel also hosted official state weddings. 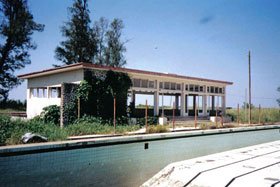 In June of 1975, Mozambique won independence from Portugal. The Grande Hotel became the headquarters for the new Frelimo government while the basement was turned into a prison for enemies of the state.

By 1977 civil war had overcome Mozambique. The resistance forces wrought havoc, and it wasn’t long before the entire country was weakened from war.

Neighboring Zimbabwe–a land-locked country–took advantage in 1981 and set up Beira as a neutral zone for international trade. 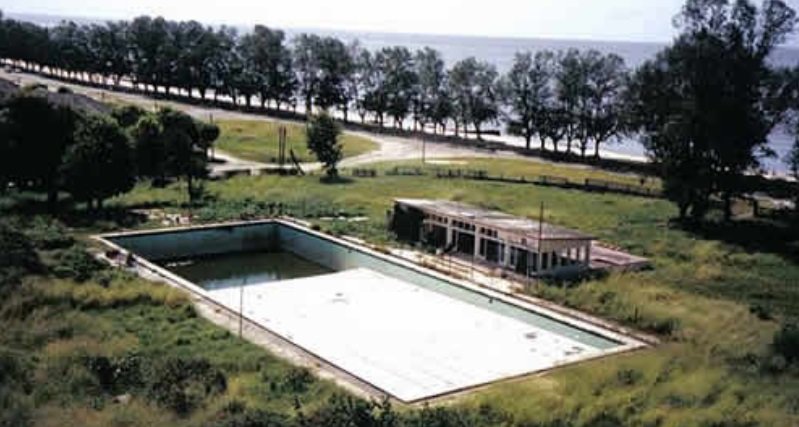 It was during this time the Grande Hotel became a home to refugees displaced by the conflict. The civil war would ease in 1992 but the building would only continue to grow in population.

With the previous owners driven out of the country and no one responsible for the building, it was left to the refugees.

Once the refugees took over the building, the Grande Hotel started to fall apart quickly. The starving residents stripped anything of value from the infrastructure, hoping to exchange valuable materials for food.

Windows were sold and the wiring and plumbing salvaged. The bathroom tiles and bathtubs were removed and sold; the marble was looted as were the fixtures. The wood was stripped and used for fire. 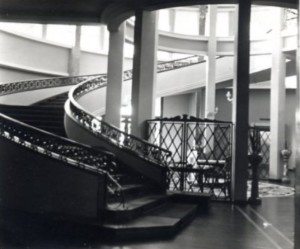 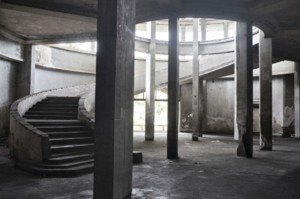 Today, the building has no doors, windows, running water, or electricity, but it continues to be a popular home for those who have no other place to go.

The refugees use the water in the swimming pool for bathing and washing clothes, despite the water being highly polluted and wrought with disease.

For example, the former pool bar is now used as a urinal. 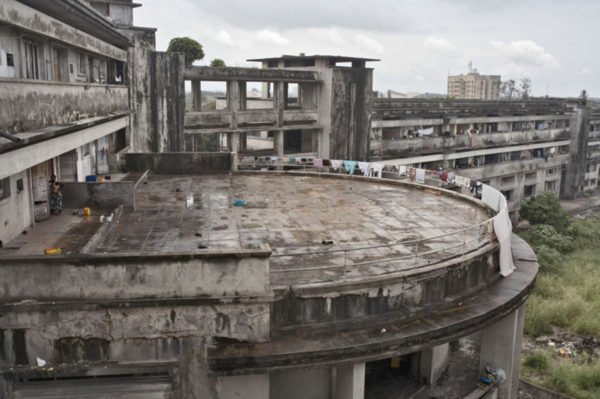 Despite extreme overcrowding, there is a rudimentary system of organization and ownership within the Grande Hotel. The very first squatters claimed rooms of their own, and some who were able to improve their lives and move out still act as landlords and rent their rooms.

Rooms claimed by refugees decades ago have been handed down by families for generations. It has been abandoned for so long, some residents spend their entire lives at the Grande Hotel.

The hotel has a head secretary who runs the community and resolves issues. The building has its own security patrol operated by a volunteer group of residents. There are small market areas where residents will barter and sell everything from fruit to batteries.

Groups of children can be seen playing around the building throughout the day while the mothers tend to their tables in the swap areas and the fathers venture into town for day jobs; the hotel has become its own city. 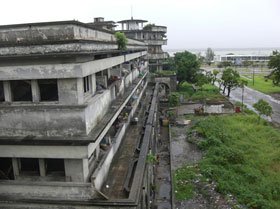 The building is unsafe and an eyesore, but there are several reasons it is unlikely the Grande Hotel will be demolished anytime soon.

For one, the city of Beira does not own the land and cannot force action. And the cost to raze the property is beyond anyone’s budget, rendering any initiative moot.

However the biggest concern is the displacement of the residents, who are there not by choice but because they have no place else to go.

emolition of the hotel would require relocation of thousands of refugees to alternate housing first, adding to the cost of any proposal.

Until action is taken, the safety of the residents will remain at risk. Parts of the building have started to crumble from decades of salvaging activity; it is only a matter of time until a floor will collapse.

With an estimated two to five thousand refugees calling the Grande Hotel home, any collapse could be catastrophic.

The structure presents dangers beyond construction failures. Children playing around vacant elevator shafts have fallen to their death.

The lack of windows or railings has left hazards at every corner, not just the elevator shafts. Numerous refugees have fallen to their deaths from the rooms and rooftops as well.

The lack of organized or a municipal sanitation disposal service has resulted in large piles of garbage accumulating around the hotel. The decades of unmanaged trash which have been allowed to accumulate pose serious health risks and add an increased threat of disease.

According to the Red Cross, the hotel residents have a very high risk of exposure to diseases such as malaria, cholera, and HIV/AIDS, among others.

Considering Beira is not a wealthy city, it’s unlikely the government can afford to act on any demolition proposal.

At least for now, the refugees of the Grande Hotel still have a home.