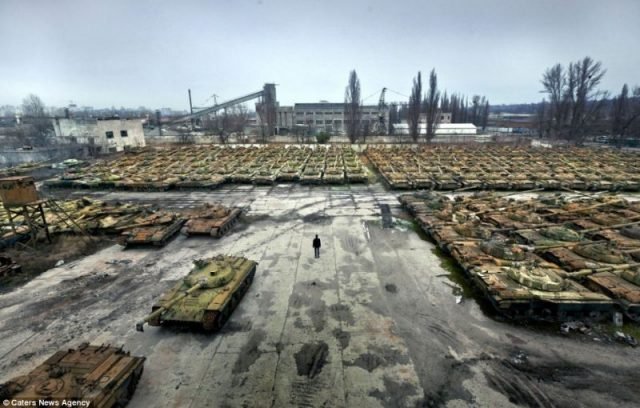 A conservative estimate puts the number of these fascinating war monuments at several hundred.  About 400 of these are silently located in a most secretive, closely guarded yard in the Ukrainian town of Kharkiv.

The secret yard is located in the eastern Ukrainian region of Slobozhanshchyna, only 20 miles away from Russia’s common border with Ukraine.

Interestingly, recently, a curious and daring 18-year-old, known as Pavel Itkin, took the risk and eventually succeeded in accessing the yard, undetected; this was hugely risky because the yard is kept under tight surveillance, with armed guards perpetually manning the site.

Brave Pavel eventually made away with scores of mouth-watering photographs, graphically documenting the astonishing range of war machinery, stashed away in a silent graveyard, with scores of prized engines and military tanks in tow.

Many found the stunning photographs, that went viral, to be amazing and incredulous.

Let us take a brief tour around the secret military war-chest that hides history.

There is no doubt about it; the photos taken by Pavel Itskin and a few other Jonny-come-lately revealed the depth of the tank-rich Ukrainian military graveyard. It also proved that Ukraine currently houses hundreds of secret vintage war vehicles that could come in handy in case the East European state got to war with a rival.

The undercover visit to Kharkiv revealed multiple rows of deadly war arsenal, some dating as far back as World War II, progressively rusting away. These previously deadly war chests are now kept idle in the Ukrainian town located some 20 miles from the Ukraine- Russia common border.

Significantly, after the fall of the former USSR in 1991, the busy military depot at Kharkiv was suddenly abandoned and left as a war relic, marked by scores of vintage military vehicles and tanks.

This depot was once a specialist military yard, skilled in the rehabilitation and overhaul of assorted warcraft. Among the vintage war machines that found a place here include the fearsome T-80, T-72, and T-64 tanks. These war-chests were probably built at a nearby factory in Malyshev.

Most Produced War Tank of the Century

Notably, the T-64 is recognized as a primary Soviet war tank that first emerged in the 1960s. Later, in 1972, the T-72 came into the picture. The T-72 subsequently earned a place as among the most produced military tanks by the close of the last century. 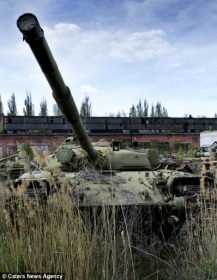 On its part, the T-80 came in 1976, around the same time as the T-72. The T-80 was dubbed as the first tank of its kind to be propelled by a gas turbine engine. Ukraine still uses the T-80 to-date. Several countries went on to use the T-80 as a prototype, building a variety of tanks modeled after the Soviet veteran. Some of these include Russia, South Korea, Pakistan, Cyprus, Kazakhstan, and Belarus.

In the 1960 s and 1970s, during its heydays, the Kharkiv yard rehabilitated over 55 engines and 60 tanks in a month. In 1991, when the USSR collapsed, the yard was abandoned since Ukraine, a fledgling state, had neither the desire nor the money to rehabilitate the used machines. Despite the down-sizing of the depot’s operations in the 1990s, the yard remained formally in operation with assigned mechanics remaining around to repair the machinery, once in a while.

The young photographer’s overall impression of the peculiar depot was significantly expressed in a word: “stunning.”

Malyshev is widely described as a powerhouse that houses some of the biggest tank factories of the 21st century. To date, armored vehicles, industrial machinery, and assorted tanks are regularly produced here. In 2014, the Malyshev factory entered the news radar when it became a storage yard for keeping the bodies of people who died when the MH17 airplane was shot down.

According to some who visited the mystery site, the Kharkiv war tank graveyard contains hundreds of vintage battle tanks. Tucked somewhere in the back corridors, you will read the sign: “Russia – Bratja.” This is, evidently, a solemn notice proclaiming the military comradeship that binds the Soviets to the Ukrainians.

As noted, the site is always under surveillance, with guards on patrol and others manning the watchtowers. Apparently, the site remains considerably operational, with busy technicians repairing tanks that are later transported to the Donbas warzone.

The witness spoke about the existence of several dozens of snow-covered under-barrels protruding up the perimeter wall. There are both newly painted and rusty military tanks adorning the supposed graveyard. In 2015, it was reported that the work of rehabilitating over 50 military tanks at the site was complete and that these would be released for operational projects in Eastern Ukraine.

Many people admire the deep historical values of this fascinating, vintage, military graveyard located in the well-documented city of Kharkiv, Ukraine.

We hope that this bit of history, plucked from Eastern Europe’s Ukraine, inspires in you both nostalgia and considerable curiosity.