It was August of 1911, when Sheriff J.B. Webber of Oroville, California, got word of a strange “savage” found in the corral of a local slaughter house.

The stranger–male, at least middle-age, weak and malnutritioned, and nude save for a strip of cloth worn like a cape–bore the appearance of an Indian. But Indians native to the area, like most Native American tribes, had long since died out, the last of them killed in one final massacre in 1865, almost 50 years ago.

Sheriff Webber collected the man and transported him back to the town’s jail—largely for the man’s own protection. It seems locals, alarmed at the man’s sudden arrival and appearance, had grown fearful and hostile.

Not helping were area newspapers who the next day quickly labeled the man everything from the “Wild Man of Oroville” to “the missing link.” Some papers even printed fictional, fanciful stories to sell more copies.

They quickly wired the Sheriff: “Hold Indian til arrival professor State University who will take charge and be responsible for him. Matter important account aboriginal history.”

Once the professors arrived, communication with the “Wild Man,” fortunately, proved relatively easy; Kroeber and Waterman picked up the stranger’s language quickly.

The two university professors then took him to the UC Parnassus campus where it was soon deduced that the “Wild Man” was actually a member—perhaps the last—of the Yahi Indian tribe. 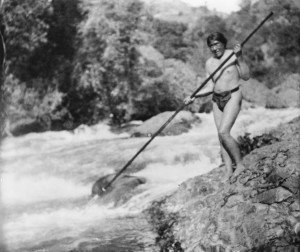 The Yahi, a once populace tribe (1,500 members in 1770), were native to Northern California. The Gold Rush of the mid 1800’s foretold their doom. Migrating white settlers violently displaced many of them.

By the 1860’s, Yahi numbers had decreased to around 400. Further conflicts with gun-toting settlers lowered their population even further. The Three Knolls Massacre of 1865, it was believed, killed all but a handful. Finally, a few years later, in 1868, a group of cowboys cornered the final tribesmen and women in a cave, killing them.

All that is but one. 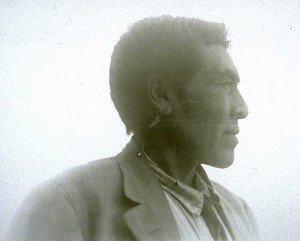 One thing the professors could not learn from this man was his name; he would not speak it. It was considered a violation of his culture and principals to speak one’s name oneself.

Instead, the two professors named him Ishi, the Yahi word for “man.” Ishi’s exact age could never be determined either. It was believed he was born around 1862, making him 49 years-old when he stumbled into the yard of the slaughterhouse in 1911.

After the hecatomb of the Yahi in the mid 1800’s, Ishi reported that there were no more than six remaining Yahi by 1872.

Weakened by starvation, disease and white hostility, Yahi numbers eventually decreased to just him. For years, Ishi refuged in the canyons of Mill and Deer Creeks until the increasing scarcity of wild game drove him out of the hills and into the white man’s world. 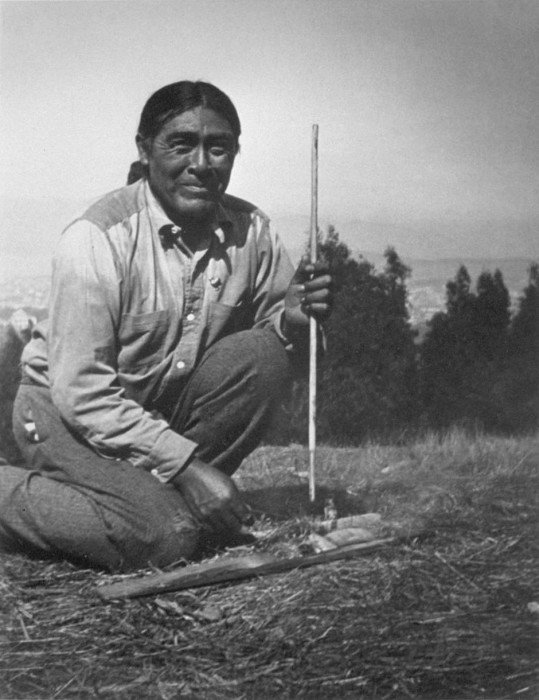 Though Ishi was given the chance by the University to return to the wild or be relocated to a nearby reservation, he declined both options, preferring to take up residence in the college’s Department of Anthology.

Despite his stranger in a strange land status, Ishi showed an extraordinary willingness to adapt to his new environment.

Though not forced upon him, Ishi took quickly to American ways of dress and showed an interest in modern forms of transportation including ferryboats, streetcars and trains. (Existing photos of Ishi in native dress standing in the forest were staged specifically for the camera.)

Under the friendship and guardianship of Dr. Alfred Kroeber, numerous scientists came to study with and interview Ishi. Ishi’s responses to their myriad of questions would be meticulously documented and provide to modern scholars details of the Yahi’s culture and daily life as well as insight into his tribe’s methods of fire-making, tool construction and weapons like bows and arrows.

[ Did you know? In 1901 Alfred Kroeber was awarded the first doctorate in anthropology by Columbia University. ]

Ishi would also often be asked to demonstrate his own excellent craftsmanship; an expertise he, by all accounts, was gleeful to share with onlookers.

Research into Ishi’s earlier life and the lifestyle of his people was often achieved via the full immersion of his friends/studiers. In the summer of 1914, Ishi, Krober, Waterman and Dr. Saxton Pope and Pope’s 11 year-old son embarked on a hunting trip with Ishi acting as guide for a three-month trek into the California wilderness.

Along with these experiences, Ishi was also often audio recorded. These documents, which eventually numbered to 148 wax cylinders, are the world’s primary source for information about Ishi and the Yahi.

Ishi was a surprisingly chatty storyteller; his retelling of his people’s fable “The Story of Wood Duck” spans 51 cylinders.

In 2010, these recordings were chosen by the Librarian of Congress for the National Recording Registry, an annual list of recordings deemed to be of vital import to the history and culture of the United States.

Ishi’s life among the white man would not be long however. Life expectancy for men in 1900 was only 48 years-old. Additionally, from almost the day of his discovery, Ishi was beset with a variety of physical aliments including bronchial infections and back pain.

It was theorized that Ishi’s early isolation from others had forever weakened his immunity. In 1915, Ishi was diagnosed with tuberculosis (TB), a then wide-spread and incurable disease. 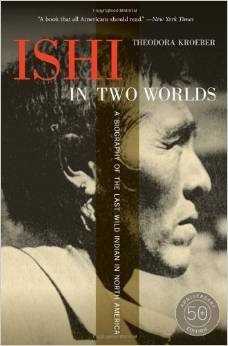 It had only five years since his discovery at the slaughterhouse.

In the 1964, Krober’s widow, Theodora, sorted through and edited her husband’s voluminous notes (he had died in 1960) to publish the book, “Ishi in Two Worlds.” Upon publication, it would sell over two million copies.

[ Thanks to the Sloan Foundation & Library of Congress, Ishi’s medical records are digitally available. View them here. ]

Decades after Ishi’s death, Ishi’s name entered the news again when another University of California anthropology professor, Steven Shackley, theorized that Ishi may not have been of the Yahi tribe at all.

Based upon the arrowheads and other artifacts Ishi made while in residence at the University, he discovered that they were not in the style of the Yahi leading to speculation that Ishi may have been of Wintu or Nomlaki or other mixed blood. 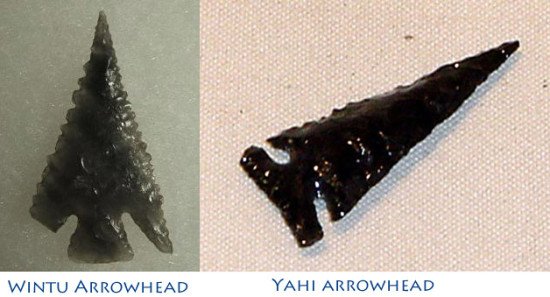 As Indians populations in the West died out, members increasingly turned to outside (even one-time enemy) tribes to try to forestall their mutual extinction. Ishi may have been the product of one of these unions, his upbringing an amalgamation of various Indian cultures.

It has also suggested that Ishi remarkable adaptability with the white world may have had its roots in a childhood that necessitated the synthesizing of various traditions and customs.

Of any heritage, amongst the many often romanticized tales of last persons or of people out of time (the Japanese soldier abandoned on a Pacific isle, etc.), there is at least one true example of such a man, the last of his kind, and representing with him the last bit of a culture and an era– 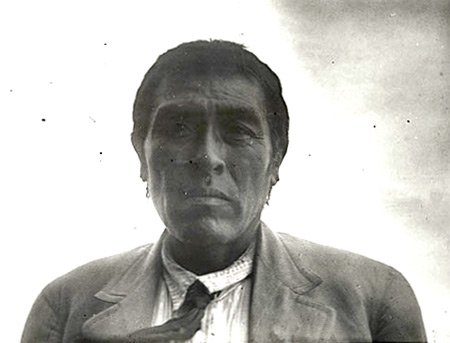 the man still known as Ishi, the Last Yahi.

Want to see more of Ishi? UC Berkeley has made Dr. Kroeber’s original photographs available online via the Phoebe A. Heart Museum of Anthropology.