Abandoned English manors raise questions. How does a beautiful estate owned by the same family for generations become deserted and neglected? Ravenswick Hall is no exception. Once a proud English manor in North Yorkshire, it remained in the same family for generations. The estate was eventually sold out of the family, partially remodeled, then abandoned, and later repossessed by the bank. Recently it was re-sold, and is now waiting to be demolished in late 2016 to make way for new construction.

A bankruptcy, a failed bid to make Historic England’s preservation list, and systematic vandalism headline the twentieth-century drama surrounding the 276 year-old estate. The new owner hopes to change that next year with a new Ravenswick Hall.

So what’s the story behind these abandoned buildings and why are they being torn down? Read on. 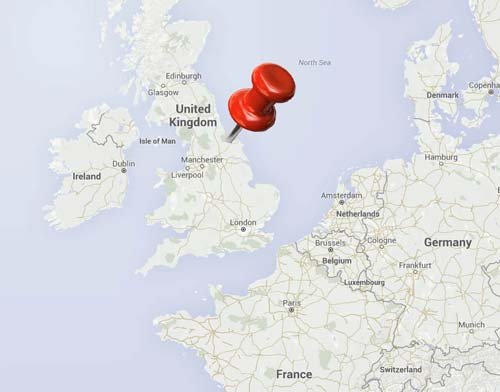 Ravenswick Hall is nestled in the mature wooded landscape just outside the town of Kirkbymoorside, and borders the southern perimeter of the beautiful North Yorkshire Moors National Park.

The homestead itself dates to 1740, when the original farmhouse was part of the Duncombe Park Estate. In 1895 industrialist Harrison Holt purchased the estate. Holt built his fortune establishing the original British Oil and Cake Mills Company at Selby, a form of which still exists today under BOCM Pauls.

Mr. Holt wished to transform the Duncombe Park Estate and enlisted the help of Gothic Revivalist architect Temple Moore. In 1910 the homestead was extended, its hunting lodge was transformed, and Ravenswick Hall was born. The name “Ravenswick” is believed to reference to the black flags of the Norse invaders who camped at the site in the ninth century.

Harrison’s son Vernon Holt inherited Ravenswick Hall in 1931. Like his father, he made additional modifications to the home. Eventually Vernon’s son (and Harrison’s grandson) James Holt inherited the estate, and the alterations continued. In all, the estate was modified at least three times during the family’s one hundred and eleven years of ownership.

In 2006 James and Mary Holt sold Ravenswick Hall after deciding the family no longer needed such a large property. The couple relinquished the main house, its outbuildings, and 80 acres to move into a smaller farmhouse on the estate.

James Holt continued to run the estate’s 2,500 acre farm, which he had managed since the 1960s (the company, “Ravenswick Limited”, was later dissolved in 2011).

The family liquidated some of the estate’s antique furniture, including a mahogany bookcase, a triple pedestal dining table, a collection of white Delft pottery, and a dozen highly ornate mirrors.

Also sold was a nineteenth-century chandelier with an interesting history: Originally hung in Guildhall, Hull, it was smuggled out during a Luftwaffe raid in May of 1941 and re-assembled at Ravenswick Hall.

Ravenswick’s new owner was Kevin Linfoot, a developer from York who was at one time “Yorkshire’s 20th richest man.” He began an extensive remodeling project in 2007 that stalled under a financial hardship and was never completed. This included the construction of a new principal staircase (which remains unfinished today), the removal of several interior walls, stripping of original finishes, and extensive loss of original plaster work and joinery.

There were also plans for a helicopter pad and an enormous tree house. But when Linfoot failed to pay obligations, the contractors removed items such as banisters, doors, fixtures, and windows in lieu of payment.

Linfoot was chairman of a Leeds-based residential property developer KW Linfoot Plc, until the company went into voluntary liquidation in February 2009. Among his listed assets in March 2010 were the £4 million Ravenswick Hall and its accompanying 198 acres near Kirkbymoorside – however it was noted the estate had been “extensively and systematically vandalised” and had an estimated cost to repair approaching £1 million.

Creditors Bank of Scotland and NatWest repossessed Ravenswick Hall in 2010.

For the next five years Ravenswick remained in a partially disassembled purgatory. Under bank ownership it re-appeared on the market in 2012, only this time it was marketed as being “derelict and uninhabitable.” By this time, the estate was effectively a shell. Another description was equally succinct: “Kirkbymoorside, Yorkshire £1.5m. Ravenswick, a six-bedroom house with a four-bedroom lodge and 93 acres of land. Structural renovations need to be completed, at an estimated cost of £1m.”

In April of 2012 the estate reportedly received an offer of £4,678,000 for Ravenswick Hall, however an impasse developed over Linfoot’s legal troubles with the bank. He was accused of “not co-operating with the sale of Ravenswick Hall,” and the sale collapsed.

In October of 2012 the estate was again offered for sale. The descriptions were getting progressively dour: “Ravenswick is derelict and is currently uninhabitable and in need of complete repair and renovation…. Warning! Ravenswick, The Lodge and the Outbuildings are in a dangerous and very poor state of repair. Great caution should be exercised when inspecting the property. Neither the Vendor, nor their Agent will accept any responsibility for any accidents or Injury that might occur when inspecting the property.”

From 2010 through 2012 the estate would disappear and re-appear on the market. Almost in concert with the increasing vandalism, the asking price dropped. In February of 2013 Linfoot’s companion, Victoria Greetham, submitted an offer of £1.58m for Ravenswick Hall. The amount was considerably less than the £4.68 million offer allegedly received the year before, and it does not appear the Greetham offer was accepted.

Back of main estate

By the summer of 2015 the estate had been sold to a private bidder; few details were revealed of the sale. Ravenswick Hall’s new owners, who wished to remain anonymous, had grand plans for rebuilding the once-proud estate. To their credit the new owners were concerned with the town’s reception to such plans, and wished to gather feedback before breaking ground.

In July of 2015 the architects held a public exhibition to display some of the new owner’s proposals to the town residents. Reader comments to the announcement were less than flattering, but according to the architects the exhibition was a “huge success” that showed support from 94% of the residents who offered feedback.

In October of 2015 the Ryedale District Council had received and approved the formal application to demolish Ravenswick Hall “together with adjacent lodge and majority of associated outbuildings.” In its place the application stated the new owners wished to build a 10-bedroom country house in the classic design “and associated buildings including leisure building, service building, detached quadruple garage, gatehouse, and pool house,” among others.

By February of 2016 announcements were made of the first major new country house to be built in Yorkshire for 200 years. After the old estate is demolished, the new owner plans to include landscaped gardens with a temple and grotto, belvederes, and two linked pools – in addition to several staff dwellings with attached garages.

According to the architects, the new estate will be a family home and will retain the Ravenswick Hall name. Construction is expected to begin later in 2016.

During its prime Ravenswick Hall was one of North Yorkshire’s finer homes. The main home was impressive for its time, with three reception areas, a billiard room, library, and offices. Between the lodging structures it has thirteen bedrooms, five bathrooms, and three cellars.

The estate included an extensive range of stabling, domestic outhouses and outbuildings, a squash court, swimming pool, tennis court, and in addition to the farmland, nearly 200 acres of park and woodlands.

In 2013 Ravenswick Hall was submitted to Historic England for consideration under the Planning (Listed Buildings and Conservation Areas) Act of 1990, due to its potential architectural and historic interest. The organization decided the home did not meet the criteria for listing. Among the reasons were “extensive and significant alterations” and “extensive stripping of internal finishes and joinery, with much of what remains being vandalized.” The report also revealed the original principal building no longer survives “in any recognizable form” today.

As an abandoned estate, Ravenswick lacks the panache of England’s best. English country homes such as Witley Court offer more visual excitement (not to mention are legal to visit – Ravenswick is private property). Here walls are missing, finishes have been stripped, and fixtures are absent. The house was not remodeled as much as it was decorticated of its ornamental accouterments.

A stroll through the once-proud home reveals a shell that still appears modestly regal, even today. Inside its décor has been stripped, from the wall ornamentation to the tile work around the fireplaces. There are wooden frames, remodeling dust, and extra lumber lying about. A breeze flaps torn fabric from a roof remodel that was never finished. Mesh netting was installed and readied for plaster, but never used.

Vegetation grows up through the floor and out the window frames. In other rooms vines have intruded through open windows and slowly enveloped the built-in cabinets. No furniture remains, although the porcelain fixtures that were left behind are broken.

Ironically the only building to retain most of its glass is the greenhouse, which has only lost panels as the foliage inside breaks out. The pool is completely covered by debris, and today is completely hidden from view. The outbuildings are each in various states of disrepair: holes in roof, soft floors, and because most of the doors and windows are missing, there is moisture everywhere. Moss covers the floor of one room like a carpet.

Naked framed walls stand erect and ceilings are half-covered in drywall. Construction debris abounds; if not for the graffiti, you’d think the remodel was recent and still in progress.

Aside from the principal home, there is little of architectural significance. Ravenswick Hall may not have the age or originality to qualify for English Heritage, and Harrison Holt wasn’t a Rockefeller, but that doesn’t mean the story isn’t interesting.

And it’s not over, the next chapter starts later this year. For now we enjoy one last look at Holt’s Ravenswick Hall before it is gone forever.