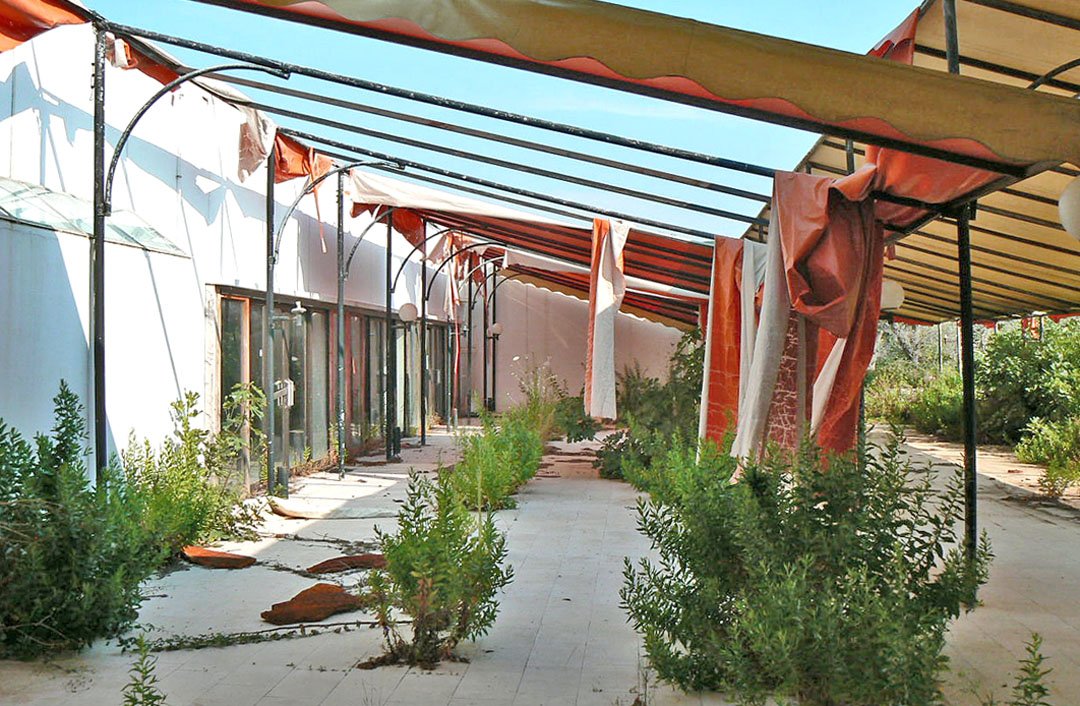 Come to the beautiful crescent-shaped beaches of Valdanos, nestled in a cove on the southeastern shores of the Adriatic Sea. Wake up to a beautiful Montenegrin sunrise peeking over thousand year-old olive tree groves. Play fútbol on the grass fields or try a round of mini-golf. Tennis courts are a stone’s throw away from the ocean. Afterward grab a quick lunch at the waterside café, or take a dip in the pool!

The resort has laundry, post office, and a supermarket for your basic needs. Every villa has sweeping views of the sea. For those who prefer to caravan, a full-service campground is also on the premises. Valdanos offers 240 sunny days a year, but for the restless at night the discotheque should whet the appetite.

There is one problem… It has been closed for years. 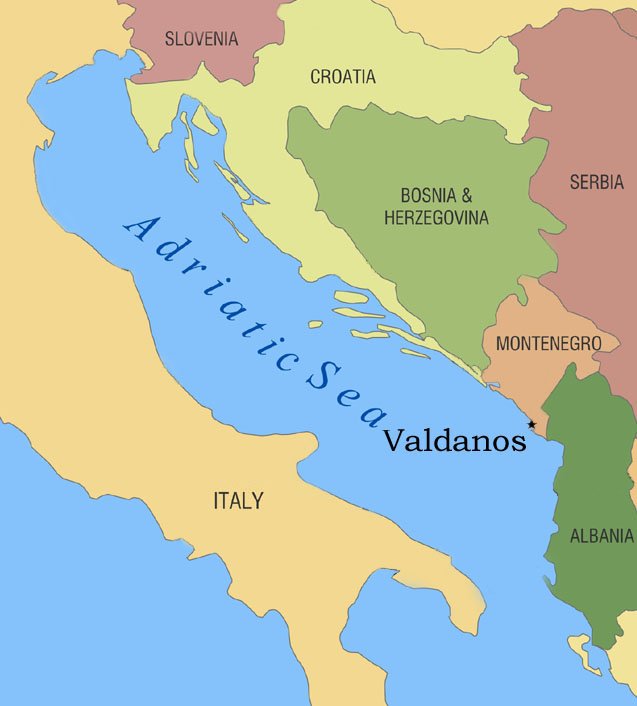 The sheltered bay is about 3 miles (5 km) northwest of Ulcinj, the closest city center in Montenegro. The beach stretches nearly 2,000 feet (600m) long and acts as a barrier between the ocean and the largest preserved olive grove in the Mediterranean, over 400 thousand square meters with 18 thousand olive trees.

Vegetation overgrowth covers abandoned trailers at Valdanos now, but it wasn’t always this way. For thousands of years generations of peaceful residents tended to their olive trees, establishing tradition along the way (example: A man would plant an olive tree before he could marry his bride).

Pirates and shippers alike have sought shelter in Valdanos bay for protection from the harsh winds. Armed conflict has left more than a handful of Roman, Greek, and Medieval shipwrecks on the sea floor. Wrecks of submarines are also rumored to reside in the area, which is considered a rich underwater archaeological site.

Residents of Valdanos have been expropriated from their land twice in the 20th century. The first instance came in 1949 when the government wanted to establish a state-run agricultural program. When this failed, residents re-claimed the land.

The second expropriation came in 1978 when the Federal Secretariat for National Defense of Yugoslavia claimed the land for military purposes.

Existing owners were given meager compensation well below market value, and forced to leave.

Plan A: Military Base 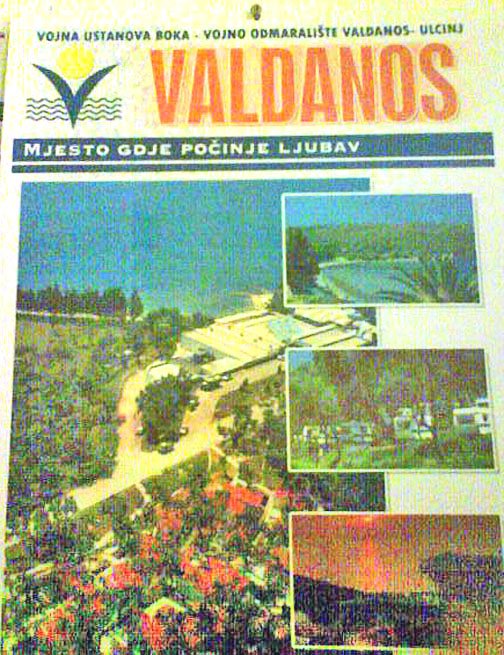 The residents didn’t realize it at the time, but it was their local representatives who betrayed them. In 1976, city officials desperate for cash or industry hatched a plan to propose the site of Valdanos to the Yugoslav military as a location for a base.

The Montenegrin officials earned a meeting with the Federal Secretariat for National Defense a year later; the concept was an easy sell.

When the citizens heard of the army’s plans to destroy the olive groves for a military base, public outcry was overwhelming. The Federal Secretariat eventually acquiesced and settled for a smaller portion of land between the olive trees and the water.

The expropriation began in 1978. Residents were dispossessed of their property and given a meager compensation of 10 cents per square foot ($1 per square meter), and $60 (£36/€43) per olive tree.

The offer was an insult, but with rumors circulating of arrest facing those who wouldn’t sign, few dared to fight the takeover.

Of the 200 families displaced, 184 accepted the initial terms. The sixteen brave enough to decline and sue the state were later awarded three times the original amount.

Yet two years after the residents had been removed, the military base had yet to materialize. In 1980 the country was battling recession fueled by an eventual Western embargo over the country’s excessive borrowing.

When Yugoslav “President for Life” Josip Tito died on May 4th that year, a shift in power meant a shift in priorities. 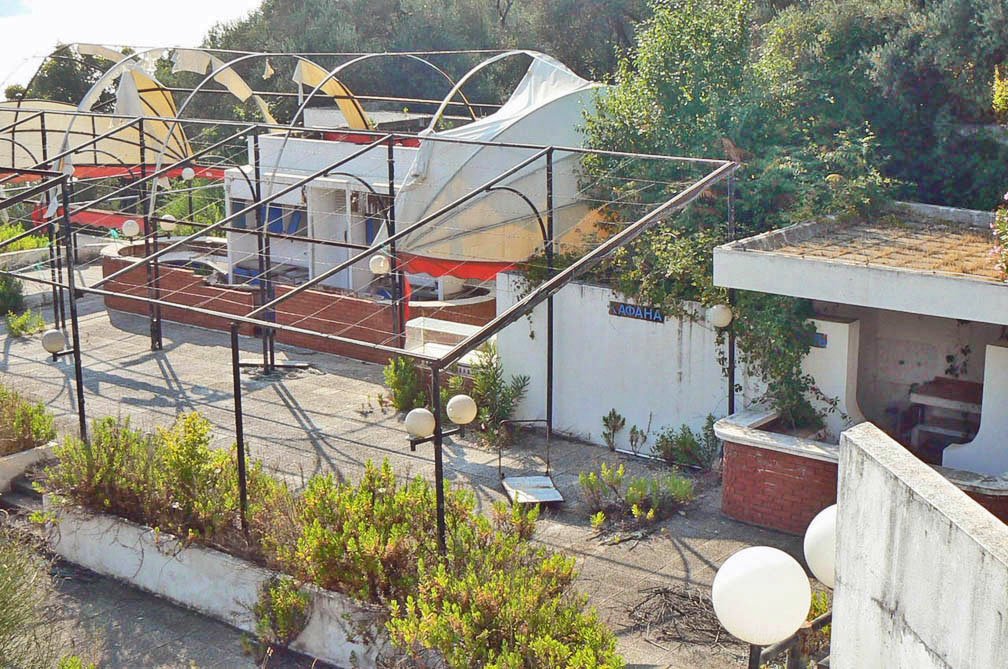 Short on funds and no longer needing a perimeter naval base, the military decided to use Valdanos as a resort for its forces instead. Plans were drawn for a resort featuring villas, campgrounds, and temporary housing.

Construction would take a little over two years before it was officially opened on April 26th, 1983. 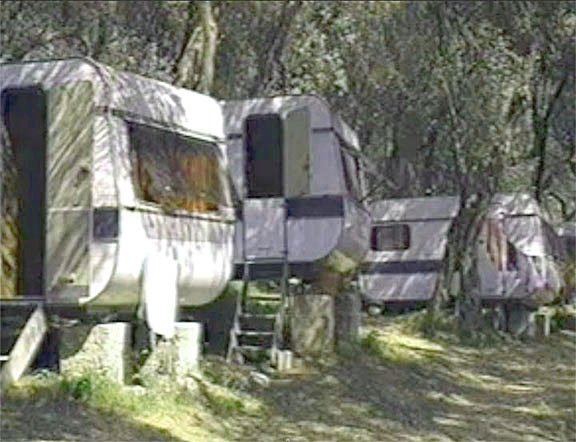 Varied accommodations were available, depending on means or rank. A campground was available for the frugal visitors, lower-ranking, and outdoorsmen. The next step up was one of 150 trailers. Larger families could chose from 78 prefabricated homes.

Officers and the better-off made use of the 29 duplex homes while two exclusive private villas were usually reserved for the highest-ranking officials or important guests.

The region’s topography allowed for stadium-seating layout of the villas, which were staggered on the hills with breathtaking views of Valdanos Bay. Medical care was handled by a first aid point; a local switchboard was established for telephone services.

The resort’s relative isolation from the nearest town also required Valdanos to have its own supermarket. For good measure, a pastry shop was established as well.

A restaurant with large covered patio (pictured above) offered diners a 270-degree view of sunsets across the bay.

Guests were treated to live music at the café next to the restaurant. For beach access, a spiral stairway led visitors from the restaurant and lounge area down to the water (pictured below).

Video of Valdanos during heyday:

Volatile Time for a Vacation 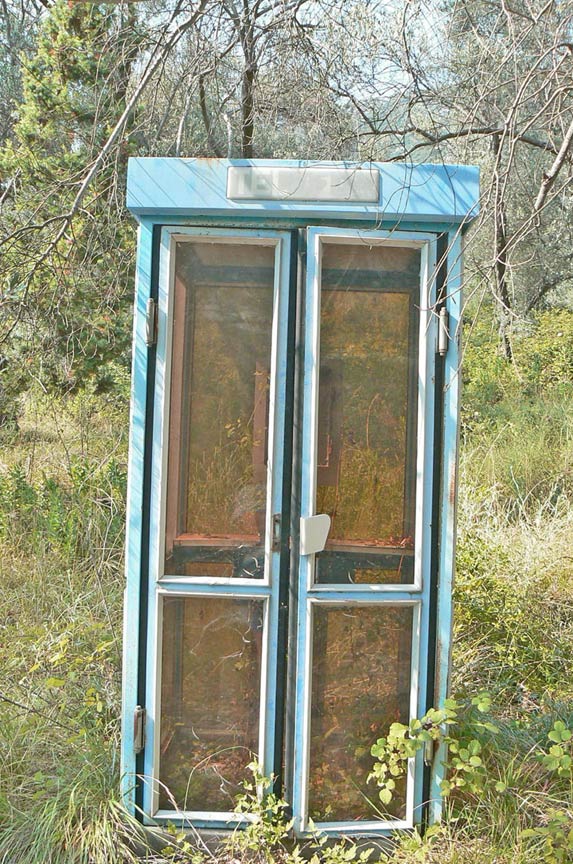 By the early 1990s the turmoil in Yugoslavia had boiled over; four countries would claim independence between June of 1991 and March of 1992 (Croatia, Slovenia, Macedonia, Bosnia and Herzegovina).

The new Federal Republic of Yugoslavia was formed in 1992, and it included Montenegro (who did not gain independence until May 21, 2006).

Despite Valdanos’ isolation, its geography did not insulate the resort from civil unrest affecting the region. After Croatia claimed independence in 1991, the Yugoslav Navy was forced to leave Croatian ports.

In December of 1993 Yugoslav Navy Rear Admiral Dojcilo Isakovic announced intentions to assume control of Valdanos and convert the resort back into the original plan for a military base. However Montenegrin response was negative and the Supreme Court subsequently failed to authorize the project.

For the time being, Valdanos was spared – but only from the military.

The economic viability of Valdanos had been driven by its affordable and easy access to all citizens of the former Yugoslavia. When the country dissolved, the Croatian and Slovenian visitors dwindled. The Montenegrin Independence referendum separated the country from Serbia in May of 2006, removing Valdanos from its largest remaining client base.

In 2007 the fewer visitors resulted in hard times for Valdanos. The resort was on the brink of bankruptcy and a weakening global economy left prospects for continued solvency bleak. 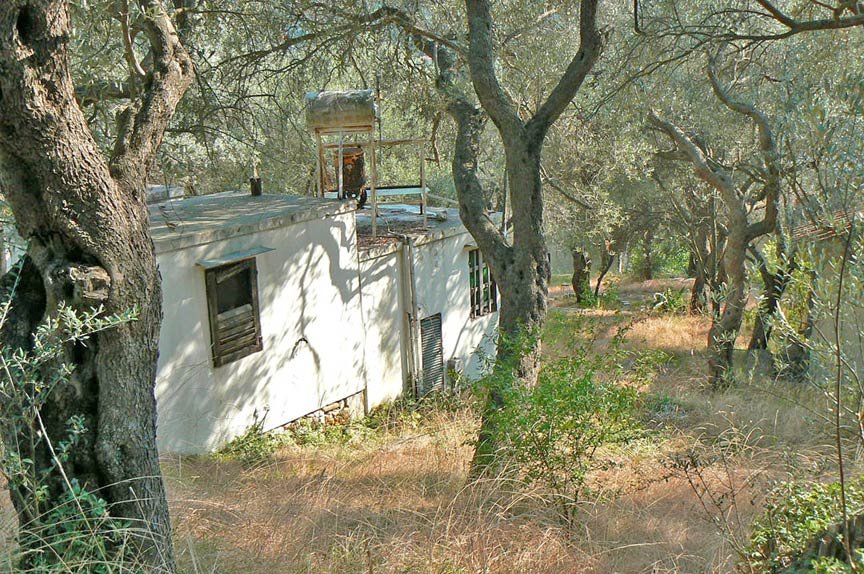 Sections of the resort were shut down to lean the operation, but it was too late. The resort wouldn’t last until the end of the year. On March 28th of 2008, the Montenegro Privatization Council (MPC) called upon international investors to submit indications of interest for a 30-year lease of the former military resort.

The MPC announced the lessee would be expected to redevelop the site into a high-level tourism complex offering a range of activities for recreation in a way that will not “endanger the natural environment or region’s ecological wealth.”

Initial interest in redeveloping Valdanos was high; the Tender Commission announced 16 bids had been submitted.

In mid-2008 The Economist reported Russian billionaire Roman Abramovich was “exploring a long-term lease to Valdanos on the Montenegrin coast,” and was “prepared to invest more than one billion two hundred million euros” pending an evaluation. 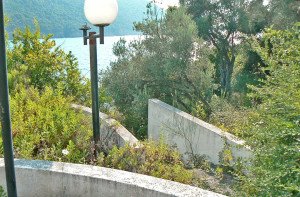 It was also rumored Austrian Soravia Group might be interested, and even the Rothschild family at one point expressed interest in developing Valdanos.

But the requirements put forth to lessees by the MPC proved too expensive and particular; investors undeterred by the era’s financial crisis were driven away by the restrictions.

Bids were expected to contain detailed conceptual, design, investment and operational plans, and bidders were required to submit financial offers to include lease terms, structure, and time table. While this is not unusual, and the requirement to update all infrastructure – to include plumbing, electric, and waste systems – deterred a fair share of suitors. 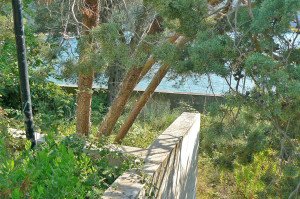 The Montenegro Privatization Council also requested the bidders to provide an investment plan for the first three years. Other lease mandates included a “green” space for guests, a spa, and an 18-hole golf course.

A portion of the original bid requirements: 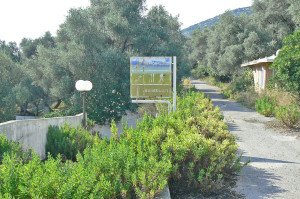 By May of 2008 Cubus Lux had been announced as the winner of the bid to redevelop the property.

The Croatian leisure and tourism group – whose portfolio already included casinos and marinas – agreed to build (among other things) a five-star hotel, casino, golf course, nightclub, and water park.

The company stated the resort would be expected to create between 400 and 600 jobs once complete.

Cubus Lux gave an estimate of 18 months until project completion, a perhaps optimistic claim given the scope of the promised development. 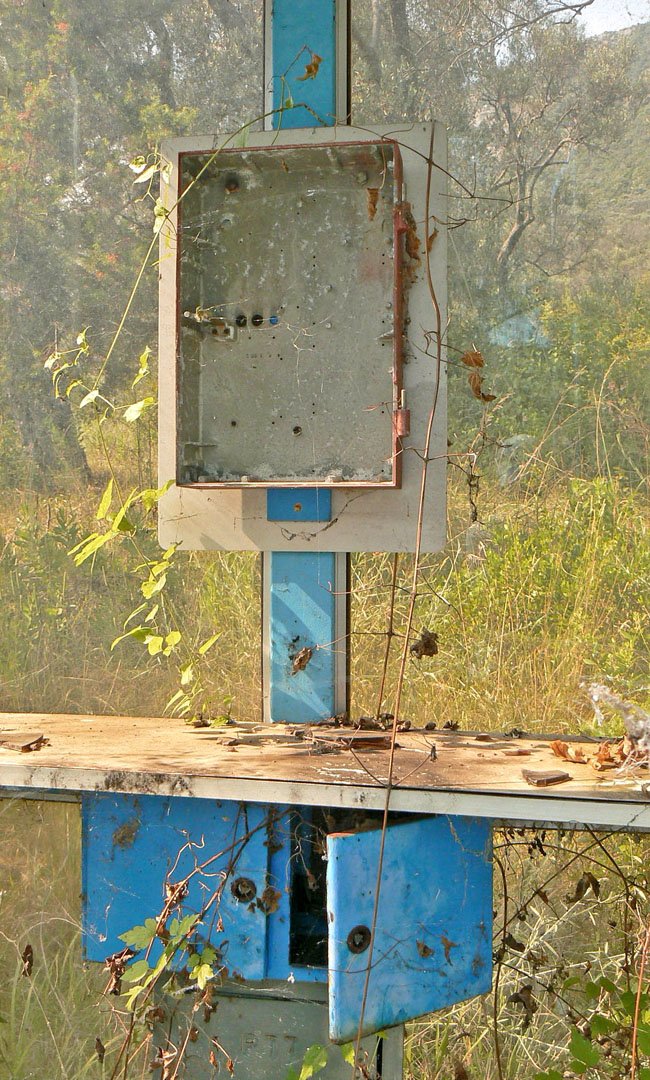 Any plans Cubus Lux had were thwarted by the worldwide financial crisis in 2008. By march of 2009 the company was still coping with delays in financing for its projects.

Banks previously committed to providing capital had backed out of deals; backers who were still engaged were delaying payments due to their own liquidity issues, courtesy of the credit crunch.

While Cubus Lux searched for new financiers the Montenegro Privatization Council was unwilling to wait; in April of 2009 the MPC once again entertained bids for the property.

At the time Moscow-based Mos City Group, one of the largest construction companies in Russia, was interested in expanding into tourism and submitted a bid. However their submission lacked the MPC’s required bank guarantee, which rendered the bid invalid. 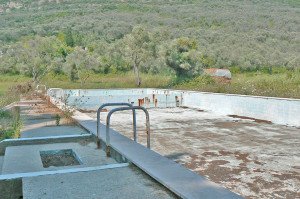 In 2010 Cubus Lux sold casino holdings in an attempt to renew the firm’s other real estate development efforts; by this time Valdanos had fallen into the periphery. Reports of “unsolved property issues” stemming from disputes with residents from the last expropriation required Cubus Lux to reconsider their investment in Valdanos.

By this time families who lost property in the 1949 and 1978 expropriations had taken their cases to the courts. They argued the return of their land was required because the government never used Valdanos for the original intended purpose of a military base.

Property rights aside, Cubus Lux was also concerned by the MPC’s requirement that the bank guarantee be deposited in advance. Despite these concerns, the company’s financial director announced the Valdanos project “would not be abandoned given the three years and large amount of money invested.”

He also added that the company has the bank guarantee – but it was not willing to deposit it in advance. 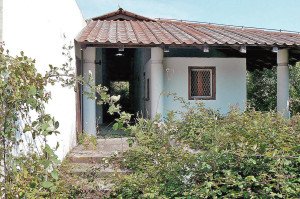 In April of 2011 the Tender Commission finally ruled the bid from Cubus Lux to be unsuccessful, and called for the Montenegro Privatization Council to issue another tender for the neglected resort.

By June, the MPC complied – although by this time successful lobbying for preservation of the olive groves pushed the development lease terms from 30 years to 90.

The public outcry at the possible decimation of the olive groves had turned Valdanos into a radioactive proposition to developers.

The MPC had now imposed environmental-driven restrictions such as a spending limit to the winning bidder to prevent over-development of the property. Now a solar energy requirement had been added.

While there was some interest, no official bids were submitted before the September deadline. The 2011 tender failed.

Montenegro faces a dilemma with the abandoned resort. The calls by expropriated families for restoration of their ownership have been outweighed by the region’s desire for the jobs and financial security offered by a long-term commitment with a world-class resort.

In the interim, the neglected olive trees have left environmentalists and former residents disconsolate. Developers have waited for years to build at Valdanos, but economic downturns and the requirements have stymied all attempts to date. The loss of jobs and tourism dollars can be felt around the region.

One thing is for certain: With Valdanos abandoned, nobody wins. 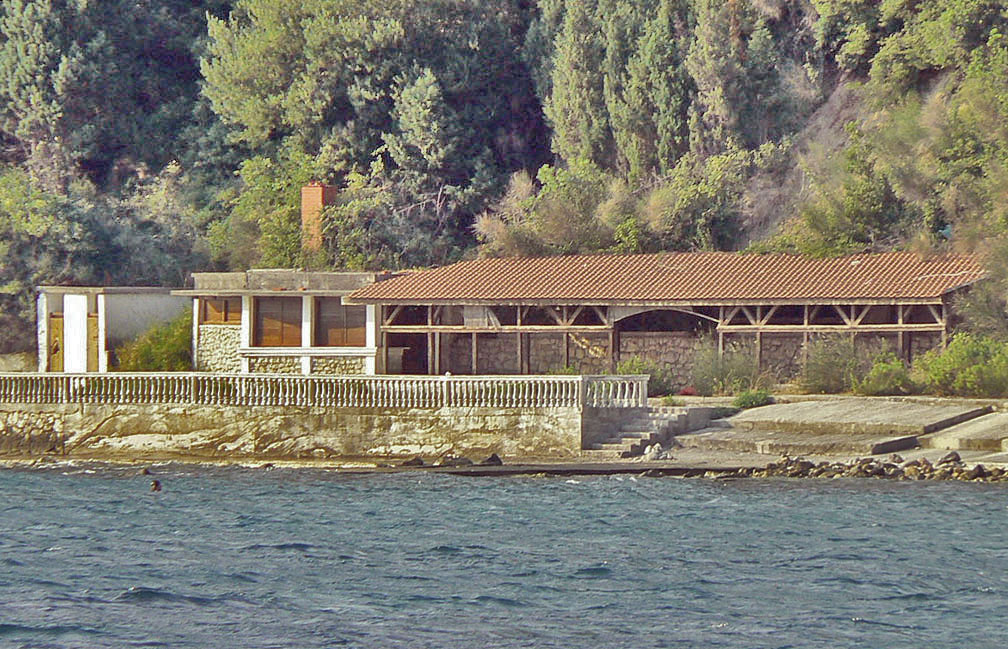 After the last failed resort bid, access to Valdanos beach was officially granted to tourists (although the resort remains closed.)

When the beach was opened to the public, the entrance fee was around €2 per car and €1.5 per person. 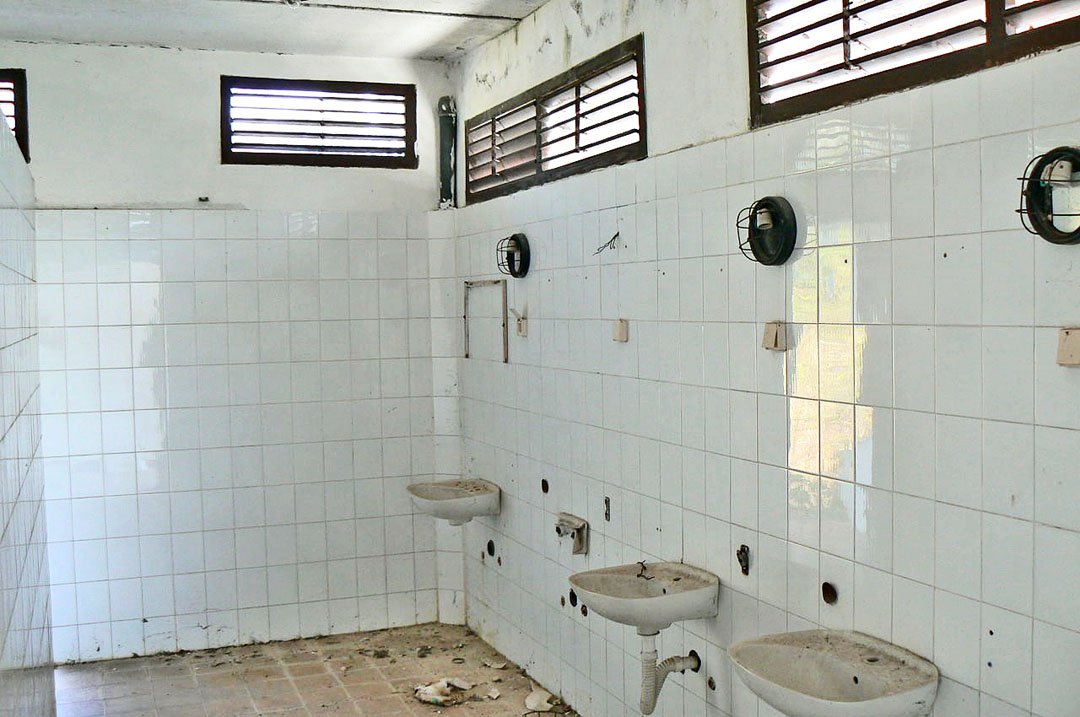