Owner of the title “longest failed beach resort of the Third Reich” belongs to Prora, a mostly abandoned collection of buildings along the Baltic coast in northeastern Germany. The seaside retreat was built by the world’s first large-scale tourism operator as an accessible vacation spot for 20,000 working-class Germans. Longer than some roads, this striking example of Third Reich architecture takes nearly two hours to circumnavigate on foot.

Prora was never operational. After the onset of the Second World War, a diverting of resources stopped construction before the resort could be completed. Today the former Nazi creation is still partially developed while struggling to find developers, investors, and acceptance. 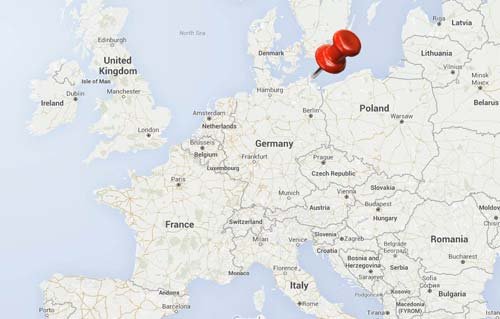 The concrete behemoth known as Prora lines Baltic Sea waterfront between Sassnitz and Binz on the eastern coast of Rügen, Germany’s largest island. Prora was the product of the German Labor Front (DAF) through their public Kraft durch Freude (KdF) or “Strength Through Joy” division. The DAF, formed in 1933, was a National Socialist trade union based on a Mussolini faction from 1925. With Adolf Hitler’s rise to power, the DAF replaced various trade unions of the Weimar Republic. While the group was gaining control, it was far from popular.

Strength Through Joy (KdF) was the leisure organization of the DAF. It was established to promote National Socialism, but in the eyes of Germans it was the world’s largest tourism operator – and it was; by 1939, around 25 million Germans had participated in a KdF trip. Offerings included concerts, exhibitions, folk dancing, hiking, and theater. KdF cruise ships shuttled German middle class around like bourgeoisie, en route to one of five planned beachside resorts (of which Prora was the only constructed).

Prora’s genesis can be traced to Adolf Hitler. According to DAF leader Robert Ley, “One day [the Fuhrer] said to me that in his opinion one should construct an enormous seaside resort, the grandest and most impressive ever.” The resort was designed under the ideal that every worker deserved a holiday at the beach. It was capable of housing 20,000 Germans among its 10,000 compact rooms, which measured about 16 feet (5m) by 8 feet (2.5m) in size.

”When the visitor arrives at the resort, he must forget the past immediately. I want to construct it in such a way that he enters into a bustle of music, dance and theater that takes his breath away so that he forgets himself.”

For Hitler’s “largest sea resort to ever have existed,” architect Clemens Klotz used a Bauhaus modernist design with Brutalist influences from famed designer Le Corbusier. Klotz was tasked to design a domicile for twenty thousand, and ensuring each guest had a water view.

The resort consisted of North and South complexes, each with four blocks of ten housing units; each housing unit could accommodate 250 people. Housing sections were joined by community buildings such as dining and swimming halls. Plans included cinemas, restaurants, and sports halls. Room amenities were comparatively Spartan. Each room contained two beds, a dresser, and a sink; bathrooms and kitchens were shared, and located in smaller wings which extended west, away from the water.

All guest rooms were intended to overlook the sea, each with a single window affording beautiful views. The land-facing side of the complex housed corridors, sanitation, and storage. A design for “Festival Hall,” a massive indoor arena by architect Erich Putlitz with capacity for 20,000, was favored by Hitler but never erected.

Groundbreaking occurred in May of 1936. Nearly 9,000 construction workers from forty-eight companies contributed to the Prora seaside resort project. Buildings began to take shape in 1937, and at that time the overall complex was expected to be finished in 1941.

Incidentally construction of the Third Reich’s Prora was halted by… the Third Reich. As Hitler preached expansion, labor and materials were diverted elsewhere. The result was an unfinished Prora, and although it was the largest Third Reich building in existence, it never did function as a KdF beach resort. Ironically the planned relaxation resort for the German “working man” instead found use as a staging area for war combatants.

In its unfinished-but-livable state, it managed to find use from 1940 until 1941 to house and train battalions of police officers, 800 at a time, before they were deployed throughout Europe. In 1944 the Navy was operating a military hospital on site.

Immediately following World War II the Prora complex fell under Soviet control, and served as a refugee camp before becoming a Soviet military base; the 2nd Artillery Brigade occupied block 5 from 1945 until 1955. Before leaving, the Soviets demolished two blocks of Prora (one in the north, one in the south) and excavated valuable materials from the buildings, stripping them down to bare brick.

Prora’s interior and exterior were re-finished in 1956 by the East German military, who rebuilt several of the buildings when the German Democratic Republic‘s (GDR) National People’s Army moved in.

From 1956 until 1991 the site had restricted access while it served as an East German military base. During this time Block 4 was blown up while being used for urban combat training, and Block 5 housed the soldiers; today some of these East German sections still lay as large ruins.

From 1990 until 1992 it was home to the Military Technical School of the Bundeswehr. For the next two years it again served as an asylum for Balkan refugees. When the Bundeswehr left Prora was dropped in the lap of the Federal Republic of Germany, who struggled to find a use for the immense structures. The buildings were marketed commercially for years, eventually including tax incentives to attract business.

The 55 year-old buildings were mostly empty by 1993, and by this time most were beginning to show signs of vandalism and neglect. The only signs of life at Prora in the nineteen nineties was the Prora Center operating out of Block 3 from 1995 until 2005, and “the world’s longest Youth Hostel,” which operated from 1993 until 1999 (and re-opened in 2011).

As with other Third Reich relics, preservation is a divisive and sensitive issue. Critics complain that rebuilding and finishing the Prora resort grants Hitler a “posthumous victory.” Others point out the concept was “always about tourism,” so for many it doesn’t have such a negative history.

Preservationists embrace the structure’s history and its importance in German culture. On the business side, Prora’s location along valuable beachfront has produced opinions indifferent to its history, but focused on revenue and tax dollars.

The mayor of nearby Binz defends the talk of redevelopment: “The Americans exploit Alcatraz prison as a tourist attraction and that’s a terrible place, too.“ Youth hostel operator Oliver Thill feels unburdened by Prora’s history: “I cannot change history, and it wasn’t good but I also don’t feel responsible for it.” Another developer defends the history, observing that “Prora may have been built by the Nazis, but it was never used by them or their soldiers.”

Protecting the Prora complex was the NEUE KULTUR foundation, founded in 1992 to preserve Prora as a historical monument and to develop or utilize it in “an appropriate way to its historical importance and current regional requirements.”

The group was successful in its bid to declare Prora a national monument, an award which came in 1992. In 2000, the foundation opened Documentation Center Prora in one of the fairground buildings at Prora. Here, the group discusses the history of the buildings and the background of the restoration project.

“My argument, and the argument of quite a few architectural historians, is: Why renovate such a monument? One could also give it to a controlled decay. Leave it as is, and allow what will happen to it to happen. It’s in such bad shape that you have to do rather a lot to it. It’s almost like building it anew.”

It’s not easy to re-purpose a 32.3 million square-foot megalith. The obvious scenario of condos or a hotel disregards the concern that Prora’s comparatively meager rooms – with shared hallway bathrooms – would fail to satisfy today’s traveler. Jürgen Rostock, director of the Prora Documentation Center in Berlin, reminds us of the point: “It’s important to remember that these were not luxurious buildings. They were very modest.”

The government was fishing for buyers for more than a decade before it felt a tug on the line. Redevelopment possibilities started showing signs of life in 2004 when various blocks started to sell off individually for various uses. In September Block 6 sold for €625,000 to an unknown telephone bidder. In February of 2005 Block 3 was sold to a Binz developer who intended to refurbish the block as a hotel, however this never materialized.

In October of 2006 Blocks 1 and 2 were sold to a developer who intended to convert the blocks into apartments and shops, although this too never came to fruition. In November of 2006, Block 5 was purchased by the Federal agency for real estate, who planned to re-establish a youth hostel in the building. While the developers tried to find a solution for the other blocks, one hosted a nightclub for several years (“the M3 Prora”).

Plans were announced in September of 2010 to renovate Blocks 1 and 2 for senior housing. The investor group’s planned 300-bed home with tennis courts and swimming pools was estimated to cost 100 million euros.

One thing that did successfully launch was the youth hostel in Block 5, which re-opened in July of 2011; it cost €16.5 million to renovate and has 402 beds across 96 rooms (pictured, above and below).

Block 1 found itself for sale at auction again in March of 2012, where it sold for €2.75 million. In spring of 2013, developers began marketing new condos in “the Colossus of Prora” for as much as €700,000. For the asking price, the builder enlarged interior spaces by knocking down walls. Luxury touches were to be added, such as balconies, enlarged windows, in-floor heating, and parquet flooring.

Said one prospective buyer: “It’s better than letting the whole thing crumble. When I’m here I don’t think about the Nazi history.”

So what’s the overall status? As of March 2016, four blocks are in some stage of development or planning, one is being used as a youth hostel, and three are in ruin.

What will become of the other blocks in the future? We’ll have to wait and see. What we do know is the longer it takes, the more expensive it will be.

There is an online petition to preserve Prora (courtesy Max Reintgen)