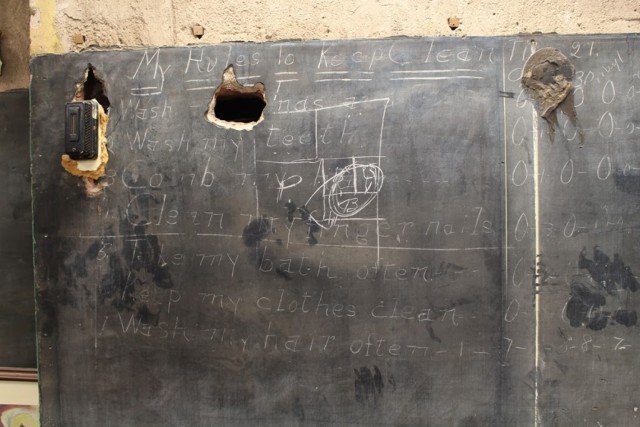 The Emerson School dates to 1895 and is one of the first public schools built in Oklahoma City, Oklahoma. The classic building is already rich in history, but a recent discovery of some hidden chalkboards offers a rare view into the classrooms of one hundred years ago. 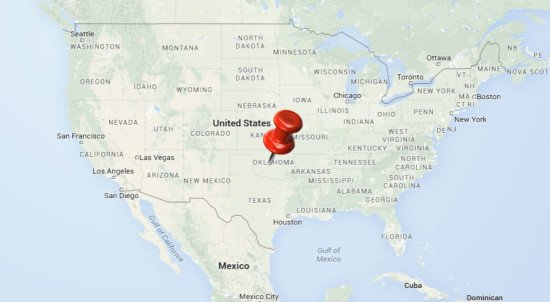 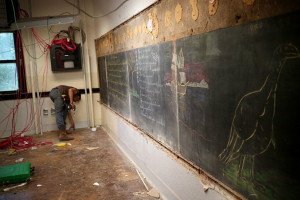 The project began innocently enough as a summer renovation to the school as part of the MAPS for Kids program, a $700 million refresh intended to modernize and upgrade the city’s public school system. Part of this renovation called for the replacement of the old green chalkboards hanging in four of the classrooms in the 120 year-old school. To be installed were new interactive whiteboards (aka “Smart Boards”), which allow for user input by touch.

When the contractors removed the chalkboards, they discovered something incredibly rare: Unmolested blackboards containing the writings of students and teachers from 1917. Said renovation project manager David Todd: “We usually find broken pipes and wires… so this is a pleasant surprise.”

Nearly one hundred years ago, these slate black boards were replaced at Emerson by D. J. Gers & Company over an extended Thanksgiving break in 1917. To commemorate the event, the boards were dedicated on November 30th and December 4th of 1917. 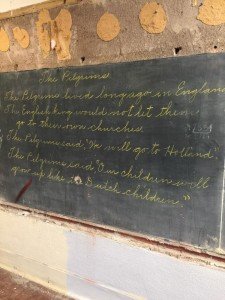 The students who stood at the blackboard finishing the day’s lessons might have been unaware they were etching script which would stay buried for nearly a century, lest the boards be filled with more personal notes and signatures.

The teachers likely knew there might be an opportunity to preserve the day’s lesson in time, evidenced by their collective failure to clean the blackboards after class that day. The school’s janitor, R.J. Scott, most certainly knew as he was keen to leave a note for whomever was fortunate to discover the buried history years later.

“We this day give to this room slate blackboards.”

Findings at this urban archaeology site weren’t limited to the blackboards; newspaper clippings and old report cards were also found stuffed inside the walls.

Compared to the text, the illustrations on the hidden chalkboards are elaborate and exact, suggesting they might be the work of a patient teacher’s hand. A pledge on one of the blackboards speaks to a time in which religion played a greater role in the classroom: “I give my head, my heart, and my life to my God, and one nation, indivisible, with justice for all.” 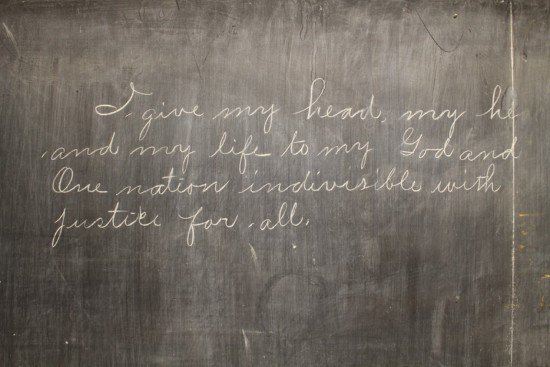 Student names such as Agnes, Gladys, Homer, and Mable are neatly written on the boards, although their significance is not known. Class leaders or hellions? Civics and cursive lessons are visible, as are notes on personal hygiene. 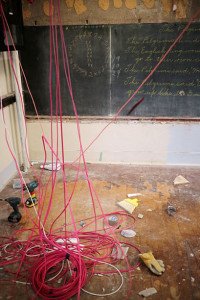 Coincidentally, the word “whoa” is also seen written on the blackboard, although it is likely in reference to the horse command and not an exclamation of awe.

On one blackboard a calendar shows an abandoned transition from November to December in 1917. On another board some notes follow a treble clef, indicating a curriculum that included music. Of interest to the school’s teachers was the fact each of the four classrooms contained illustrations of pilgrims and corresponding lessons about Thanksgiving. To them this suggested a potential cross-curriculum teaching style in 1917.

The multiplication wheel is perhaps the most striking evidence of teaching methods in generations past. When discovered, nobody at Emerson could understand just how it works (this post provides a detailed explanation).

School principal Sherry Kishore was fascinated of this find. “I have never seen that technique in my life.”

Kishore acknowledges not just the rarity of the find, but the quality as well. “The penmanship blows me away, because you don’t see a lot of that anymore. Some of the handwriting in some of these rooms is beautiful.”

To Kishore, the cursive handwriting stands out on the hidden chalkboards most. “We have kids that come that prefer to print because they don’t know how to do cursive.”

To its credit, the Oklahoma City Public School District has worked to preserve the previously hidden chalkboards. In an era when education budgets have been slashed and resources spread thin, it is not uncommon to see surplus education materials demolished or discarded. A preservation effort is both respectable and worth noting.

Protecting such a find is not easy. Chalk is not a permanent medium; a brush of the finger can wipe away the discovery. Even if protected, anything short of complete darkness could accelerate the deterioration of the bright colors and text.

To battle this, Oklahoma Historical Society representative Jeff Briley suggested protecting the formerly hidden chalkboards with acrylic glass, then controlling the light and temperature exposure. He figures with proper care and environment the blackboards could last another one hundred years.

“It was almost like a spiritual moment because people who had lived and played and worked in here, a part of them is preserved… It’s like you’re going back in time.” 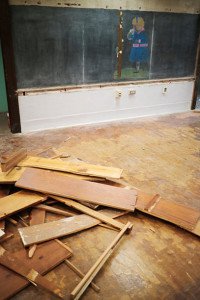 City Public Schools superintendent Robert Neu affirms the blackboards will be preserved, regardless the cost. “It may mean we have to delay the start of school in these classrooms, but we’ve got to preserve these.”

Teacher Sherry Read believes there was purpose behind the teachers of 1917 leaving behind the lessons of the day on the hidden blackboards. “I think they left them there on purpose to send a message to us, to say, ‘This is what was going on in our time.’”

Next scheduled for renovation? The floors.

This time Emerson teachers are eagerly looking forward to the next time contractors come to tear up the school. 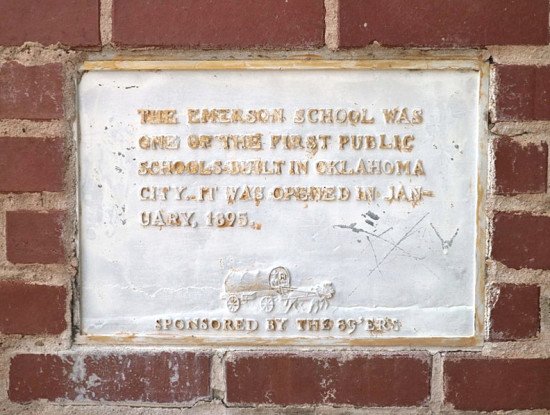