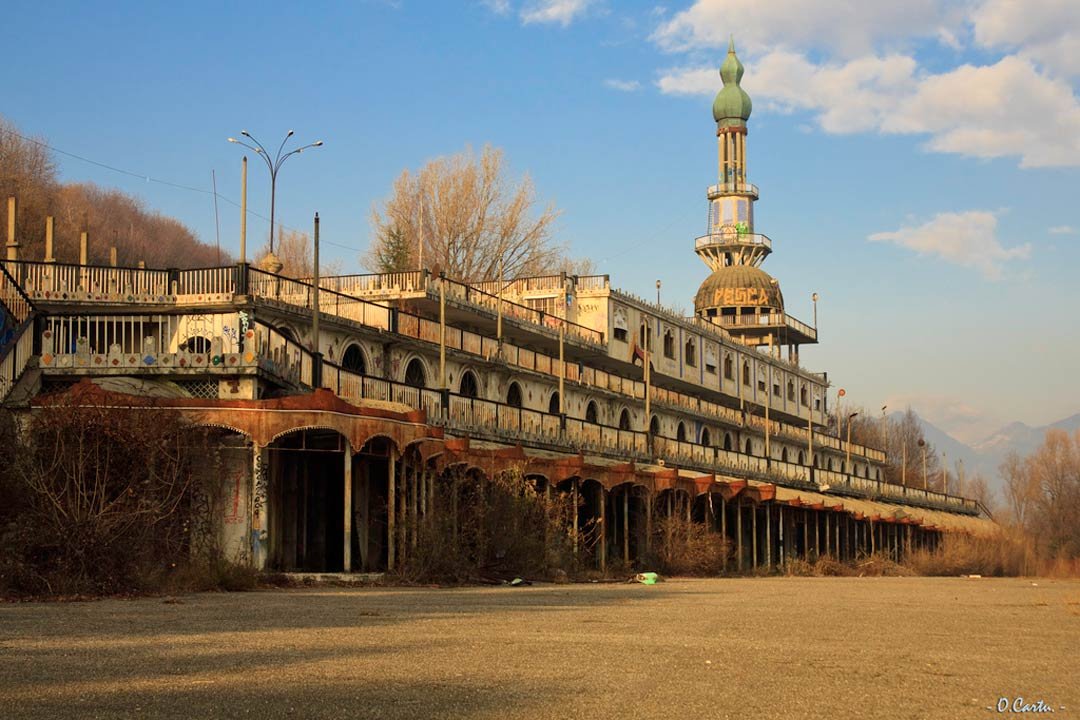 When Count Mario Bagno purchased a large amount of land in the remote northern hills of Italy fifty years ago, he envisioned building a Las Vegas-style adult playground with bars, casinos, and dance clubs. The resort town of Consonno, nestled in the hills of Brianza not far from Lecco, was intended to be the premier weekend getaway for the well-heeled of Milan.

But delays would force the resort to open before it was completed and Consonno never enjoyed the success Bagno envisioned. The clock struck midnight for his City of Toys when a 1976 landslide destroyed the only road into town. Today, the long-abandoned Città dei Balocchi sits vandalized and forgotten. 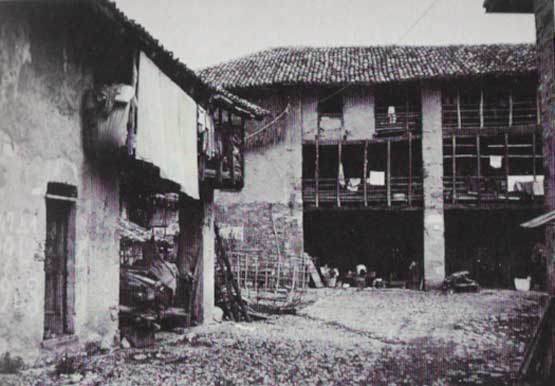 Consonno’s origins can be traced back to the Middle Ages, but the town was remote and the population never exceeded 300, its peak around the turn of the twentieth century.

For centuries the town was accessible only by mule and sustained itself through farming and agriculture. By the middle of the twentieth century the population had fallen to sixty.

Life for the country farmers would radically change early in 1962 when eccentric millionaire Count Mario Bagno paid $22.5 million lire for the property from the Real Estate Consonno Brianza company, the true owner of the land.

Despite living there for centuries, the families of Consonno did not own the land and had no control over the sale.

Count Bagno had big plans for Consonno – plans that didn’t involve the farmers. The residents, oblivious to the redevelopment plans, were surprised by the sudden changes. The town would never be the same, and within three years it would look completely different.

When bulldozers began demolition in 1965, the residents had little, if any, notice. Several residents reported learning of the plans when they first heard the sounds of the bulldozer engines. The villagers gathered what they could and fled, narrowly escaping with belongings before the walls came down.

Every home and barn was razed, along with centuries of history. Only the town’s church of San Maurizio, its accompanying cemetery, and adjacent chaplain’s house were spared from the destruction.

To say Bagno’s development plans were aggressive would be an understatement; the Count wanted to alter the topography to improve his planned resort’s views. Explosives were used to level hard rock while bulldozers removed hills and created new ones.

While the efforts might have provided for a better view, they would ultimately prevent the project from staying on schedule. Landslides triggered by the earth-altering activities slowed construction between 1966 and 1967. Thus Consonno’s grand opening was delayed, but by 1968 the first phase of construction had been completed. La Città dei Balocchi was ready for guests.

Count Bagno built his City of Toys with architectural influences from all over the world. The main shopping galleries were designed with Arabic arches and included Consonno’s now-landmark minaret tower. Elaborate fountains and Chinese pagodas were placed on the grounds. The main entrance of Consonno resembled a castle–sans drawbridge–and was guarded by medieval warriors.

Also planned were tennis courts, a motor racing circuit, soccer field, horse-riding area, and a miniature zoo. Nightlife options were plentiful as guests could choose between casinos, bars, or a dance hall/discotheque.

Count Bagno wouldn’t stop there. He also planned for a bowling alley, an amusement park, hiking trails, basketball courts, and an Egyptian Sphinx. 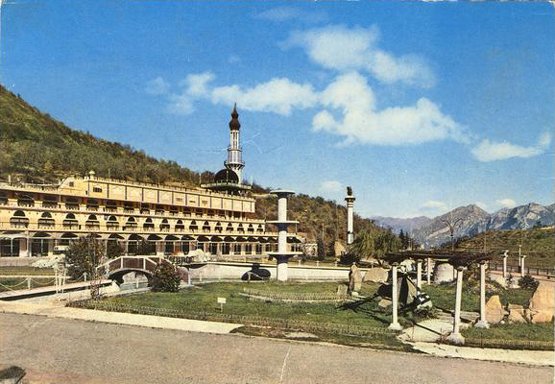 Cannons were proudly displayed on top of structures with beautiful Doric columns. The theme was more an amalgamation of various cultures with little overall continuity.

But for all the disruption in design, the randomness was the genesis of its charm.

“Consonno is the smallest town in the world, but it’s the most beautiful.”

“In Consonno the skies are more blue!”

After the houses had been introduced to Bagno’s bulldozers, the displaced Consonno residents who stayed behind were offered economy housing behind the new entertainment complex. In exchange they would be required to work low-wage jobs as resort attendants, an unpopular proposition among the homeless townspeople who had no choice but to accept.

The difficulty of the build was exacerbated by the remote location. It took years to construct and would never be finished; despite this, it was eventually opened to the public.

But the constant, slow expansion made the town feel more like a construction site rather than a resort. Chirping birds were constantly interrupted by the sounds of hammering and sawing.

Not helping the situation was Bagno’s waffling over design minutia; he would change his mind often, halting construction projects, altering plans, and re-starting them again. 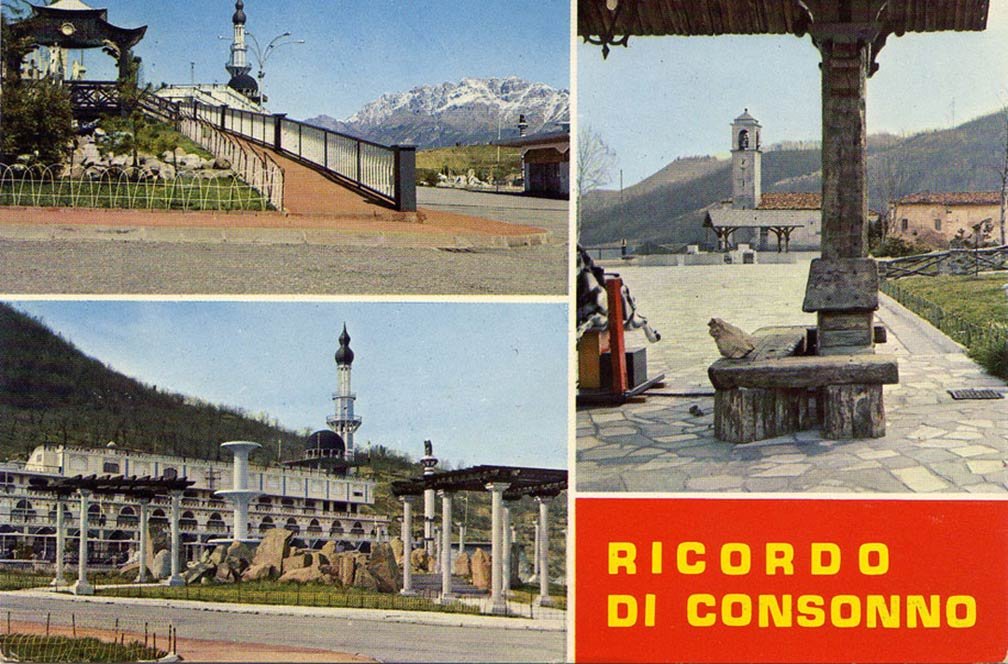 Despite the delays and continuous construction, the town enjoyed a brief boom. The unique architecture and various entertainment offerings of Consonno were enough to draw substantial crowds in the late 1960s and early 1970s. The resort town was also a popular destination for weddings and weekend parties.

However the town had its detractors within the upper-crust of nearby Lecco and Olginate. A group led by Lecco mayor Giuseppe Fumagalli denounced Count Bagno’s operation, and the Lecco Lombard College of Architects considered the mix of architecture and modifications to the landscape an abomination to the natural beauty of the area.

The construction, loud noise, and vastly different lifestyle were too much for the displaced townspeople who had stayed behind; the last original resident reportedly left Consonno in the mid-1970s. 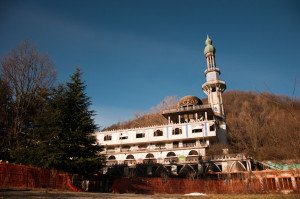 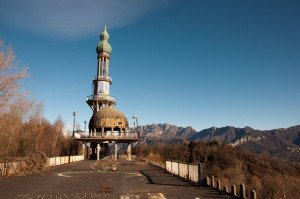 The novelty of Consonno was already wearing off when Mother Nature took revenge on Count Bagno for his relentless molestation of the landscape.

A landslide in October of 1976 destroyed the only access to the town, leaving it cut off from its vital supply lines to nearby Lecco and Olginate. This would be the death knell of the resort, which was abandoned shortly thereafter. 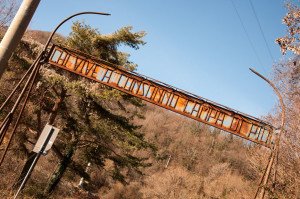 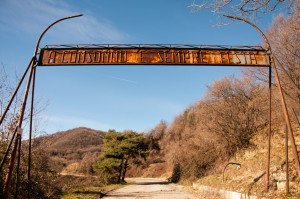 In the 1980s Count Bagno again attempted to develop Consonno, this time as an elderly oasis. The Count realized the location was too remote for the weekend vacationers from Milan, but it could be ideal for a retirement community.

Rather than demolish and rebuild, plans called to modernize and remodel the former Grand Hotel. Bagno would convert it into the nursing home.

Construction began and soon the resort was being converted into a care facility – but the project was never finished. When Mario Bagno passed away in October of 1995, his vision died with him.  The Count’s estate failed to share his enthusiasm for the senior center; when the estate acquired Consonno it stopped funneling dollars to the project. Development quickly stopped.

While the construction stopped after Bagno’s death, the care facility operations would continue for more than a decade. But with no spending by the estate, the nursing building deteriorated. Cracks were not addressed as leaks sprung up throughout the complex. Despite this, Bagno’s estate spent no money on repairs.

Over time the number of patients dwindled. When operational costs also increased, Count Bagno’s heirs had enough; Consonno was shut down for the final time in June of 2007.

The last weekend of that same month, a rave called “Summer Alliance” descended upon the abandoned town without notice. For three days during the summer of 2007, several hundred party-goers broke windows, knocked down statues, and tagged walls with graffiti. Trash littered the town and buildings reeked of feces and urine.

If there was any hope of redevelopment before the rave, there certainly wasn’t after. The party ultimately destroyed the structures of Mario’s Toyland, making any repair or re-use unlikely. 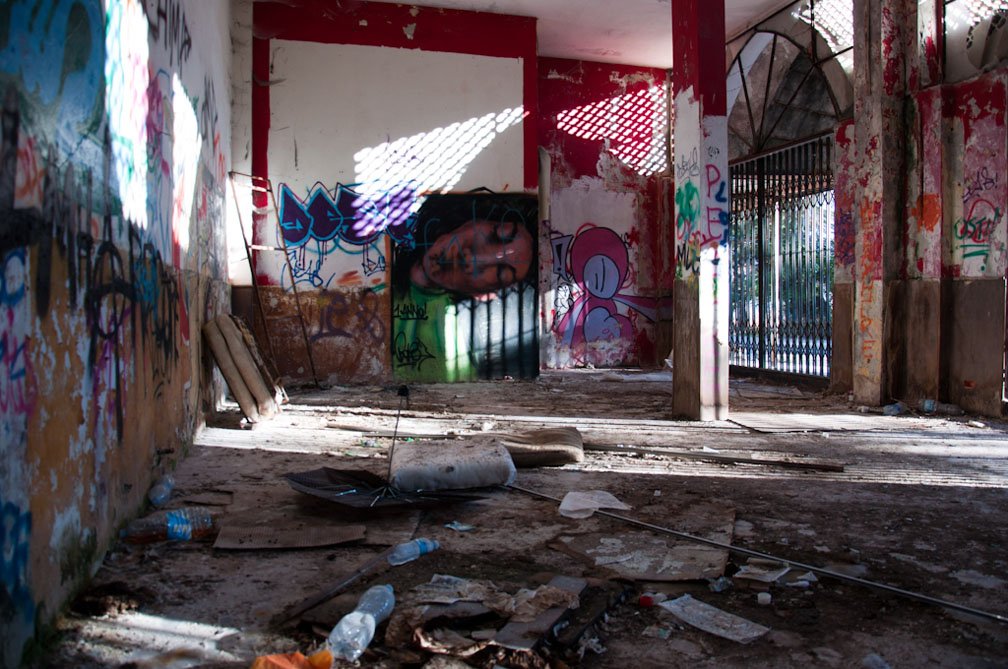 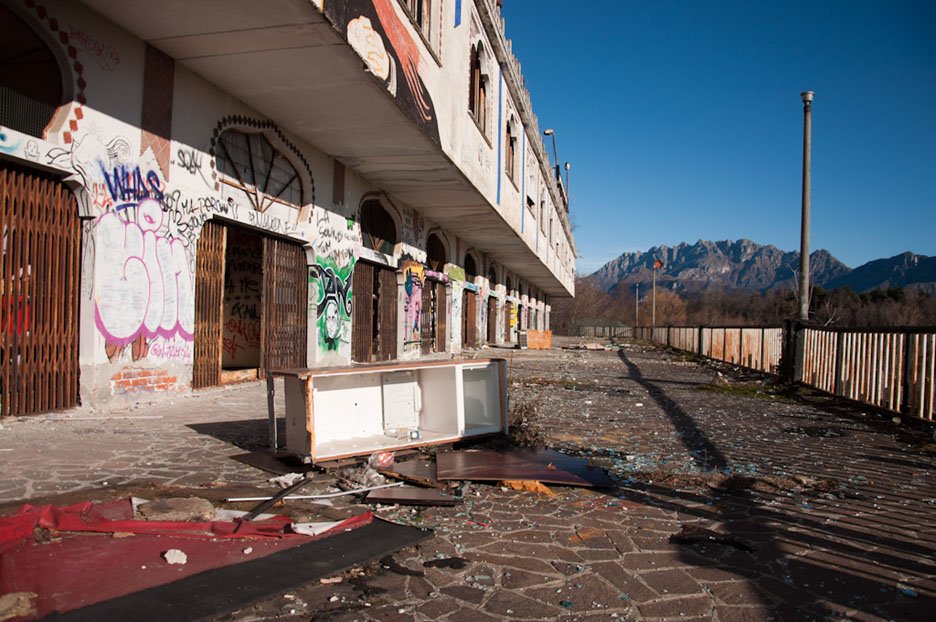 After the rave, the family had a fence erected around the abused property to remind would-be trespassers it is still private property. Today, only a lone resident hired by the estate acts as caretaker and guards against explorers and vandals.

With exception of the cemetery, access is limited. In April of 2008 the local government approved a proposal to demolish the town but several obstacles have helped prevent action.

The remote location of Consonno means proper disposal of the demolished concrete would be expensive and complicated (this also prevents the Buckner Building in Alaska from being demolished).

Financial considerations are perhaps the largest issue. The property owners are unable to pay for demolition and the nearby town of Olginate is not in a position to fund such a project either.

In December of 2012 a newspaper in Olginate reported the estate of Count Bagno owed the Provincial Tax Commission of Olginate over €30,000 in unpaid taxes. The unpaid portion arose from a dispute with the commission of Consonno’s property tax rates; Bagno’s heirs argued the decaying condition warranted a reduced rate, which they paid without approval since 2009.

In 2010 the road ruined by landslide in 1976 was repaired, restoring vehicular access to Consonno (although the fence remains and trespassing is still prohibited).

Progress is unlikely until the tax dispute is resolved, and even when that happens any action would require large amounts of money. With little opportunity for a monetary return on investment, Consonno does not appear to sit high on anyone’s priority list.

The town’s best chance for revival just might be a property sale to a Count Bagno of the 21st century, a creative billionaire with wild dreams to create a mountain paradise for northern Italy.

Until then, “the smallest town in the world” is destined to decompose under those skies that are more blue. 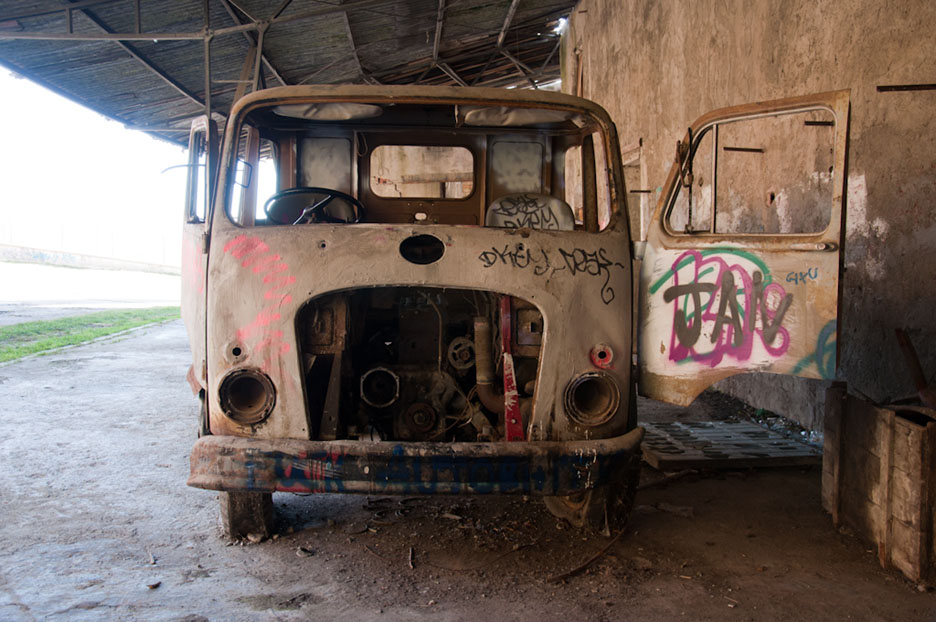 Bing Maps offers an excellent bird’s eye view. See it on the map!