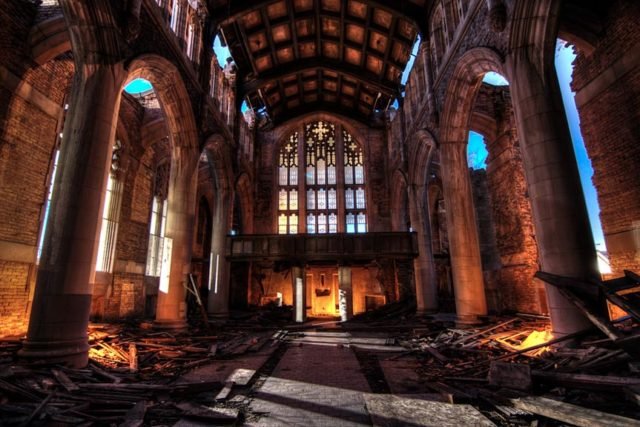 Perhaps one of the most iconic abandoned structures in Gary, City United Methodist Church was once the pride of the community. Built in 1925, the classic Gothic edifice was the result of an ambitious priest backed by U.S. Steel dollars. But the huge structure would burden the church with enormous maintenance costs for decades, and when Gary’s population declined in the 1960s and 70s the church struggled to make ends meet.

When the parishioners left town, so too did the dollars. Now one of the most photographed churches in Indiana, City United Methodist sits exposed and crumbling since it was abandoned nearly forty years ago.

Gary’s first Methodist church was established in 1906. In October of 1916, Dr. William Grant Seaman became pastor. Seaman relished his role in the growing congregation, but he had bigger dreams; he wanted to build a new church to serve the social, cultural, and spiritual needs of the town’s citizens.

Seaman wanted to offer a religious oasis in the midst of a neighborhood dotted with saloons and brothels at the time.

His vision and the financial assistance of U.S. Steel Corporation resulted in the erection of the new City Church at 6th Avenue and Washington Street (map). The steel company donated the site on which the pastor wanted to build and agreed to pay for nearly half the total cost of construction. 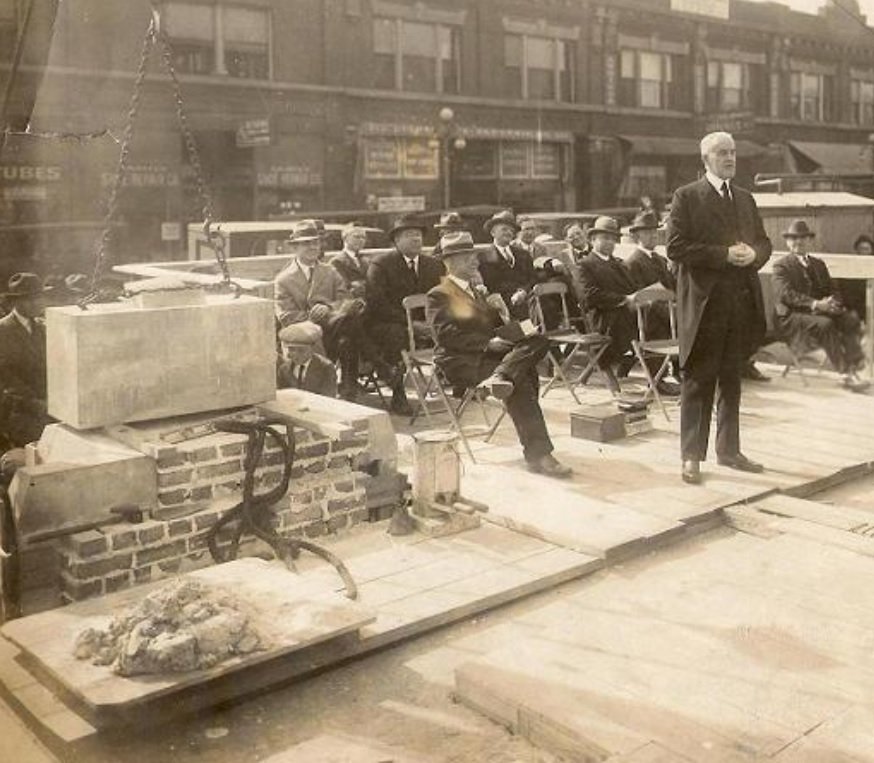 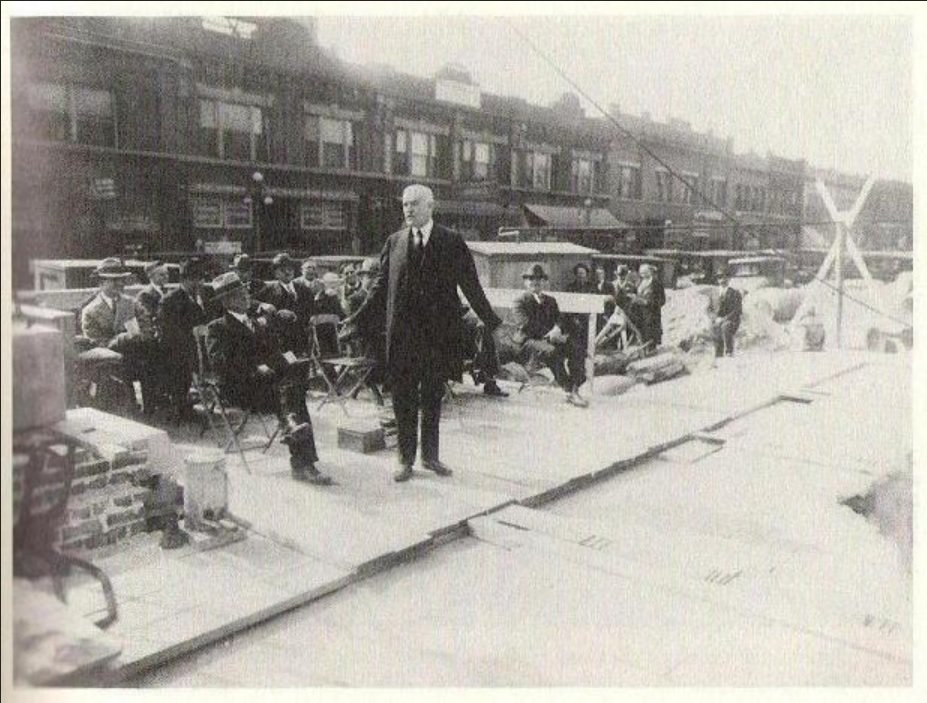 Hundreds would attend the groundbreaking, a grand event held on January 25, 1925 (above). Methodist Bishop Frederick D. Leete (standing) presided over the ceremony while Seaman (seated at left) ceremoniously turned the first shovel of dirt on the site of the new church. 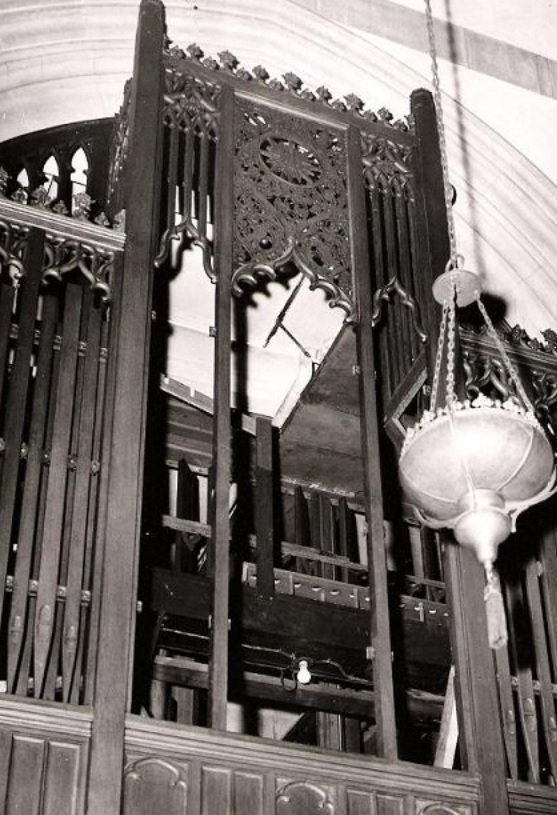 Introduced as City Church, it was a grandiose structure and one of the true Gothic churches in the country at the time. The great vaulted sanctuary was supported by massive pillars while the chancel and altar were carved from oak.

Judge Elbert Gary, namesake of the town and chairman of U.S. Steel personally donated an ornate, four-manual Skinner organ to the church (pictured at left).

The second building constructed on the property was known as Seaman Hall. This building contained four stories and a basement.

The acoustics were excellent, and the stage was well-equipped for first-class productions. Films could be shown on a huge theater-sized screen.

On the third level there was a gym for activities and interactive play. 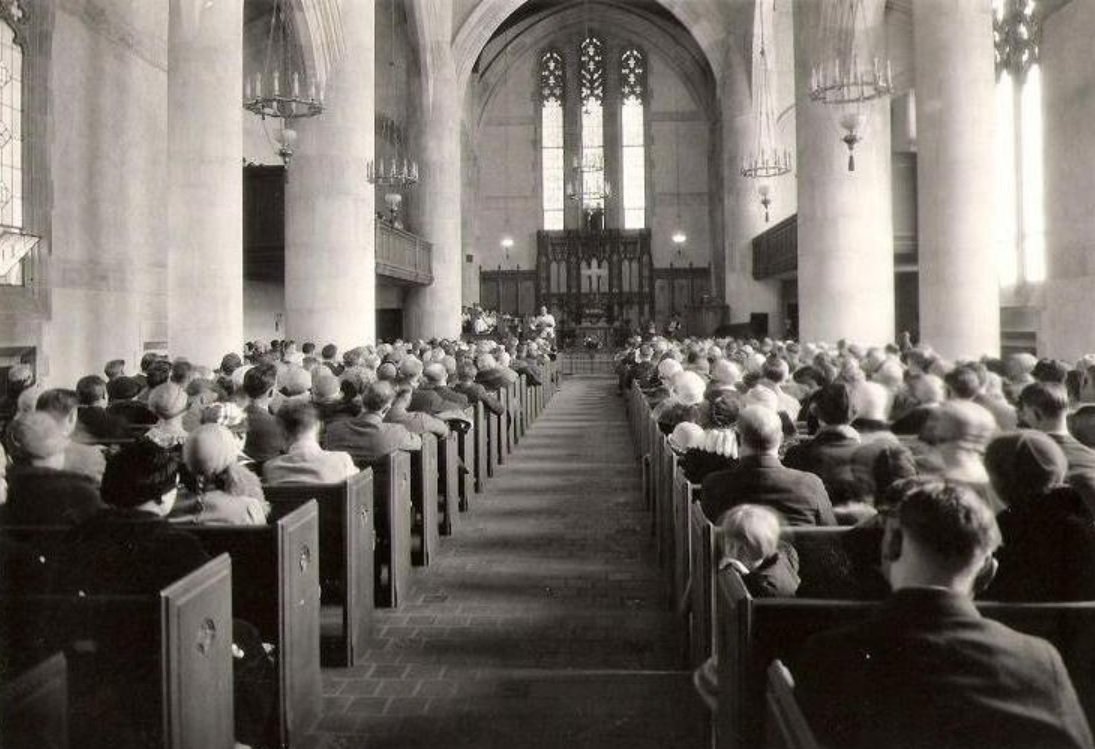 There was no shortage of celebration for the grand opening; the next seven days had nightly Thanksgiving celebrations, eulogies, and dedications.

The exuberant pastor proclaimed the opening events to be the climax of his ministerial career and the beginning of a revival of faith and brotherhood for Gary.

Despite its beauty, the building had its fair share of detractors; Gary was still young and the building was constructed at great cost and stature for a congregation and town that size.

Maintenance costs were immense and would create a financial burden on the church for decades. 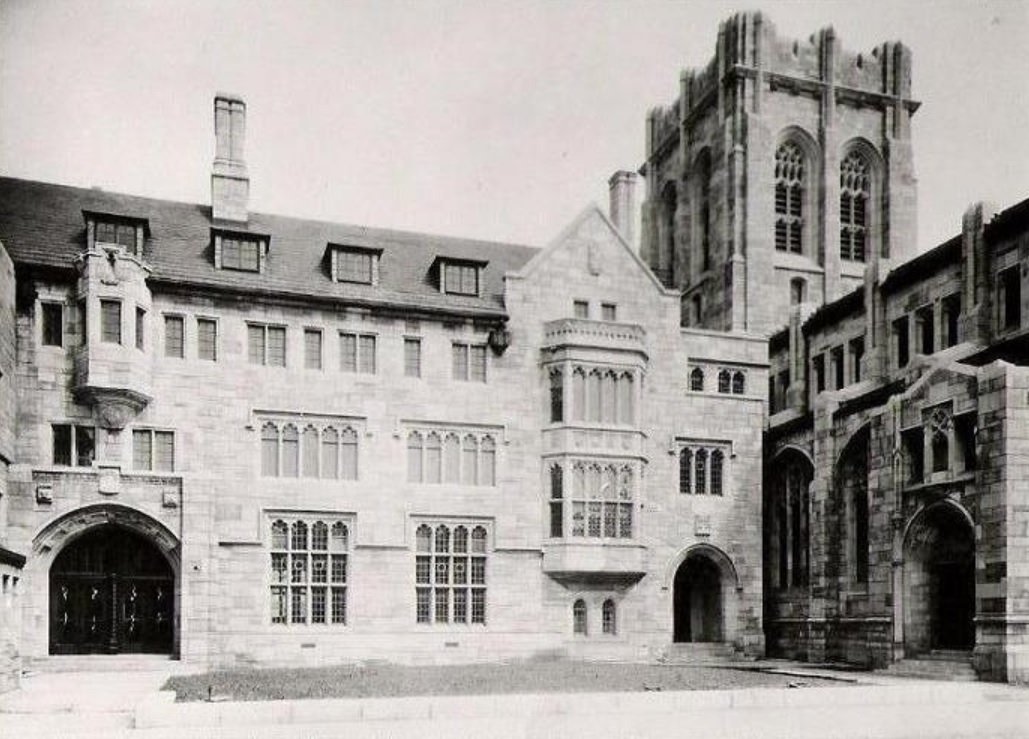 Immediately after opening, some were already labeling the structure “Seaman’s folly.” 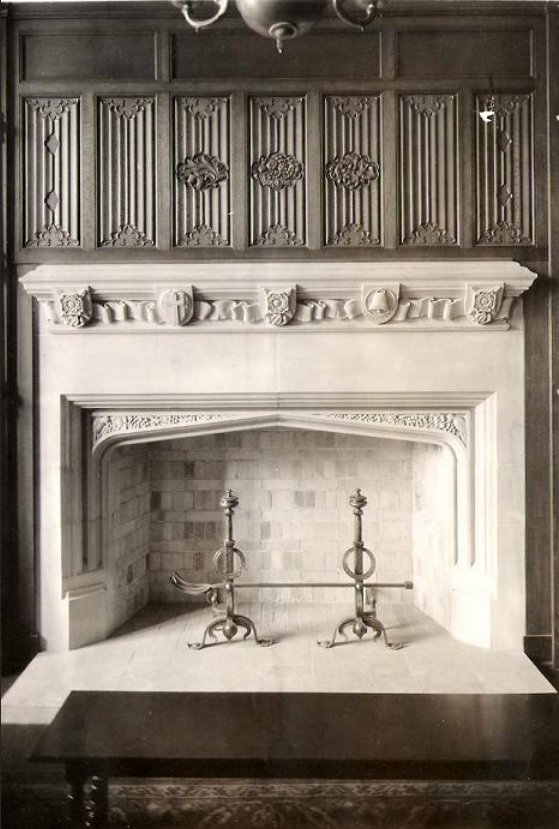 Others complained the ornamental design smacked of popery and was Seaman’s monument to himself.

Envious ministers of other faiths feared competition, as did an influential restaurateur who stalled completion of the church’s planned cafeteria as to not hurt his own business in town.

Not all of Seaman’s plans would come to fruition. His wish for a bowling alley went unfulfilled, and the rooftop garden on Seaman Hall was never finished.

Ornate fireplace then and today. Now reads “Burn them” 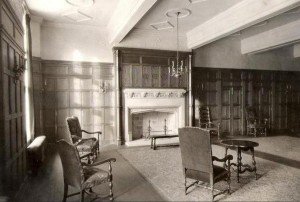 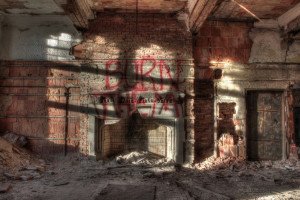 By 1927, the pastor’s 1,700-member congregation had a paid staff of six, including an assistant minister, directors of athletics and Christian education, a music master, and a secretary.

Interested in cultural affairs, Seaman recruited lecturers to speak in Seaman Hall, suggested scripts to the dramatics club, showed travel films, and sponsored interfaith pageants. The music program was said to be one of the best in the country.

The congregation did not put forth effort to open its arms to blacks, Latinos, or eastern Europeans.

In addition, Seaman’s messages and methods were starting to rub his parishioners the wrong way. 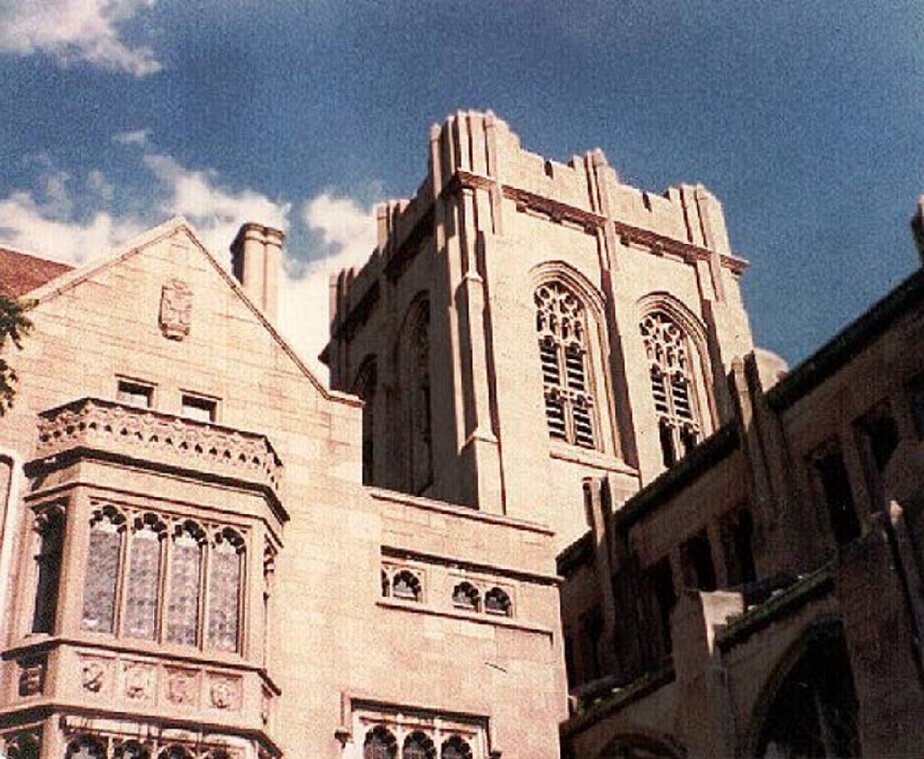 In September of 1929, these dilemmas led to Dr. Seaman’s removal; disgruntled parishioners had him transferred involuntarily to an Ohio church. Ironically, Seaman’s successor was so unpopular detractors later wished the “old founder” was back.

When William Seaman died in an automobile accident in 1944, his body was cremated and returned to City Church to be interred in the sanctuary.

The Great Depression was a difficult time for the church; a lack of financing reduced the resources available to City Church pastors in the following years. For additional income the church leased space in Seaman Hall to Gary College, which offered a satellite campus in the offices of the building. 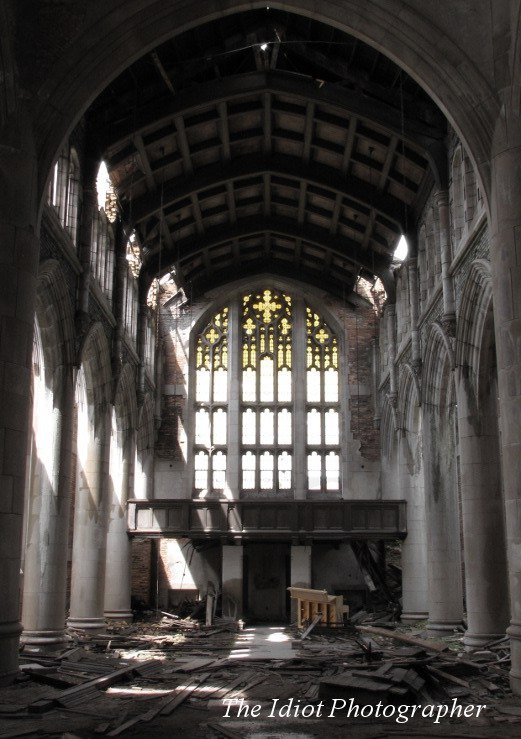 Despite continual financial problems, the church would enjoy some success. A $50,000 support grant would provide for long-overdue maintenance to be performed on the building in 1945.

After World War II, Gary enjoyed a religious revival and by the early 1950s membership eventually surpassed 3,000. A small restructuring during the 1950s would see the church named changed from City Church to City United Methodist Church.

The church and adjoining Seaman Hall were centers of cultural life in Gary for decades, with Seaman Hall hosting plays, musicals, and pageants open to all city residents.

The church’s congregation rapidly declined during the 1960s and the church was forced to shut down several community programs to keep the doors open. (see a 1967 City United Methodist Church Directory).

Seaman Hall would stay open and be home to Gary Children’s Theater and Gary Music Theater during the 1960s and into the 70s.

By 1973 the membership had fallen to 320, and with a median age of 62 and a disenchantment of the inner city by the white congregation rising, only a third of the members attended service regularly.

“It got to be too dangerous. We had a wedding where the father of the bride’s car was stolen during the ceremony. People were afraid to come down to anything unless it was in the daytime and only in the middle of the daytime, so there was no evening programs.”

Offerings weren’t enough to even pay the utility bills, much less repair the antique organ, leaking roof and failing boilers.

Church leadership attempted to find a congregation interested in the structure, but no group wanted to take on the expense of maintaining the enormous building.

After nearly 50 years of service to Gary, the City United Methodist Church finally closed its doors on October 5th, 1975.

Top: Seaman Hall before & after. Bottom: the stage today 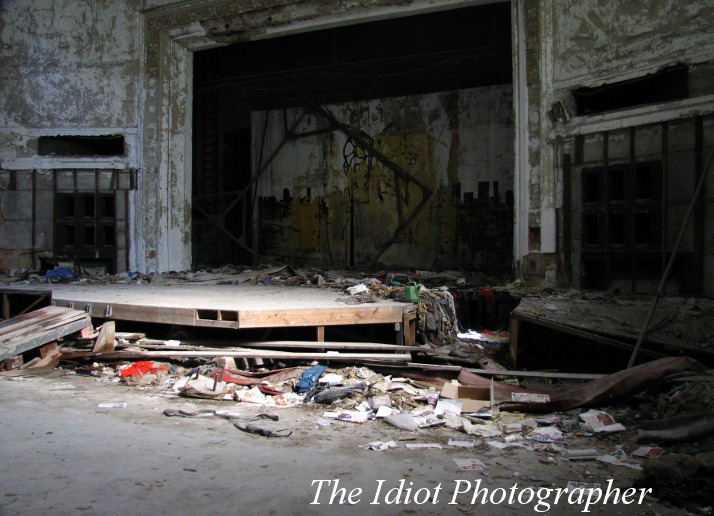 After the Methodist Church abandoned the building, it was later sold to Indiana University which continued to make use of Seaman Hall as a satellite campus.

Over the years several attempts were made to renovate and re-appropriate the City Methodist church, but none would come to fruition before October of 1997 when a large fire ravaged downtown Gary.

The fire destroyed most of the roof, exposing the interior to the elements and accelerating decay.

It wasn’t until 1999 the city finally put up a fence around the long-abandoned church to protect it from vandals and drug dealings. 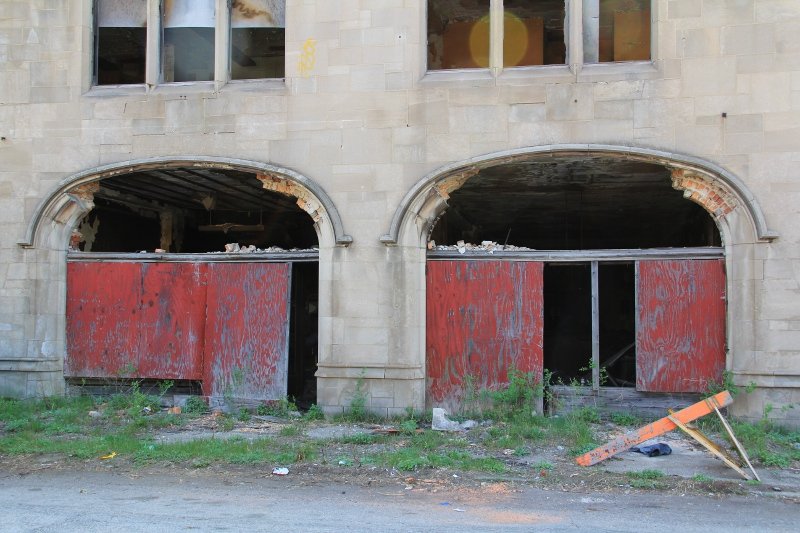 In June of 2005 the city announced plans to demolish the Gary landmark. 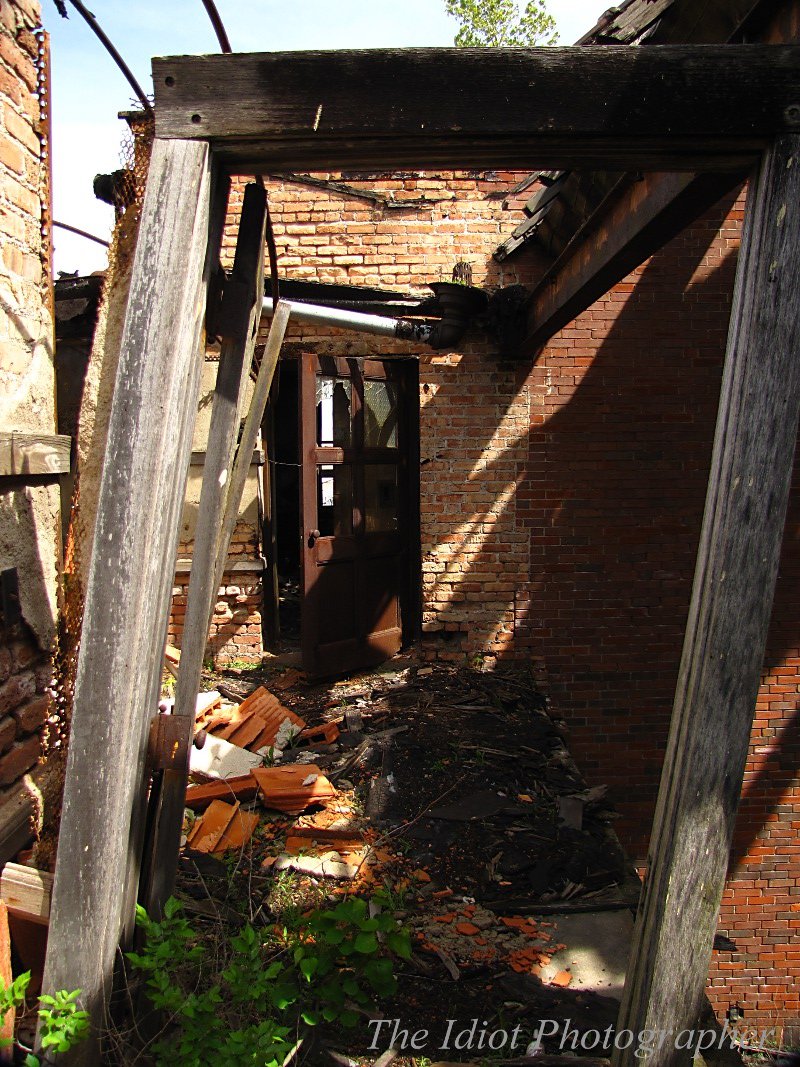 With no developers or private investors interested in the building, the Gary Housing Authority couldn’t think of a use for it that would justify the cost of rehabilitation.

The city was planning to raze the church and create a parking lot for the senior citizen residents of the neighboring Genesis Towers.

In July of 2005, the ailing church would find an ally in David Wright, Gary’s new city planning director. Wright proposed to keep only the Gothic sanctuary, allowing the space to grow into a garden-like ruin. 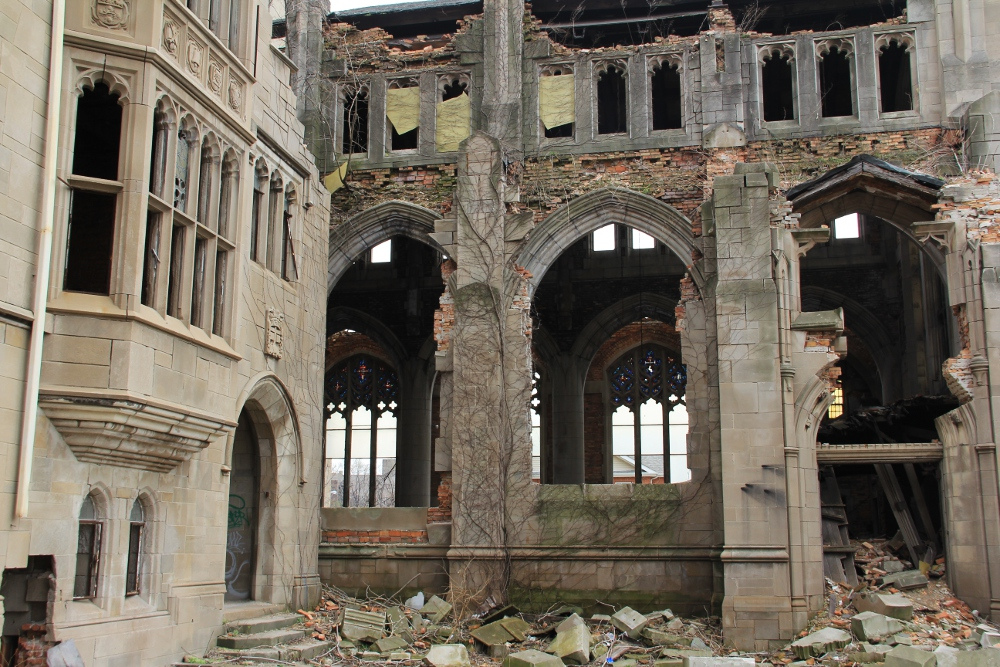 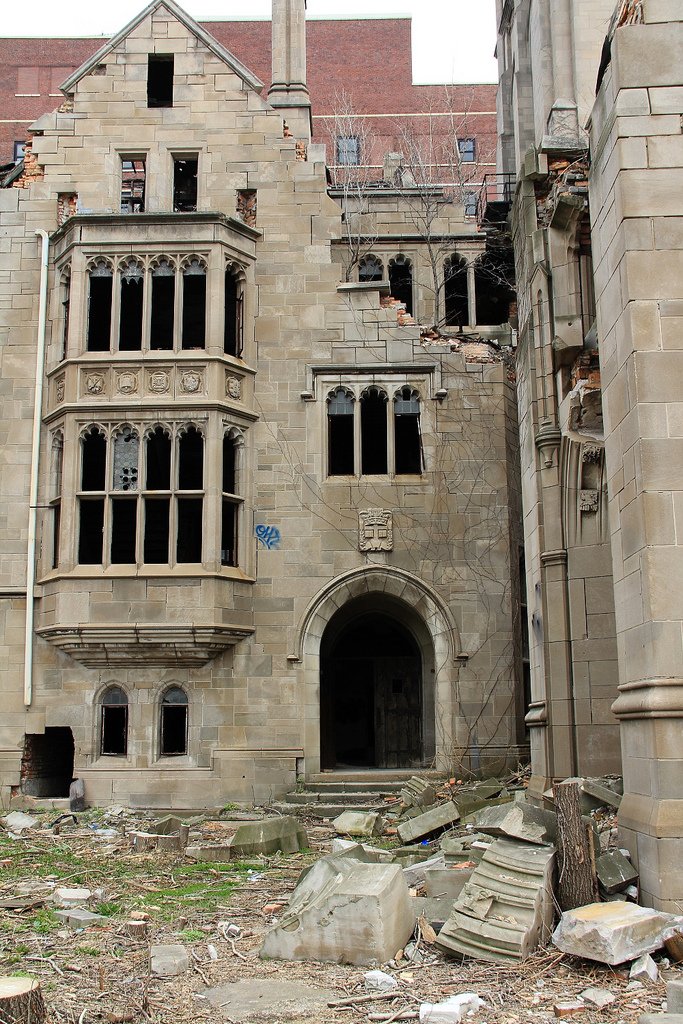 The rear part of the building, office space, and Seaman Hall would be demolished – but only after the limestone, decorative masonry and other fixtures were sold off to finance the project.

“As long as the church tower doesn’t leave our skyline I look at it as a victory,” said Wright. 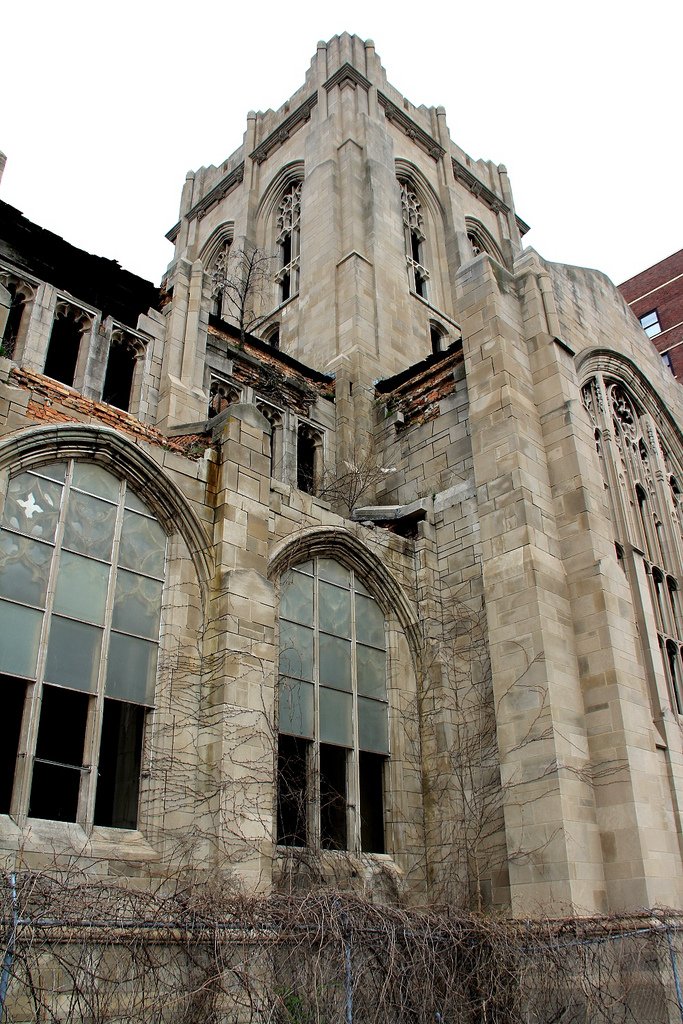 Unfortunately, scavengers had the same idea. City workers found the building robbed of stained glass and ladders propped up inside the church, left behind by thieves.

What materials were left were not of enough value to finance a renovation, so the project was reluctantly shelved. 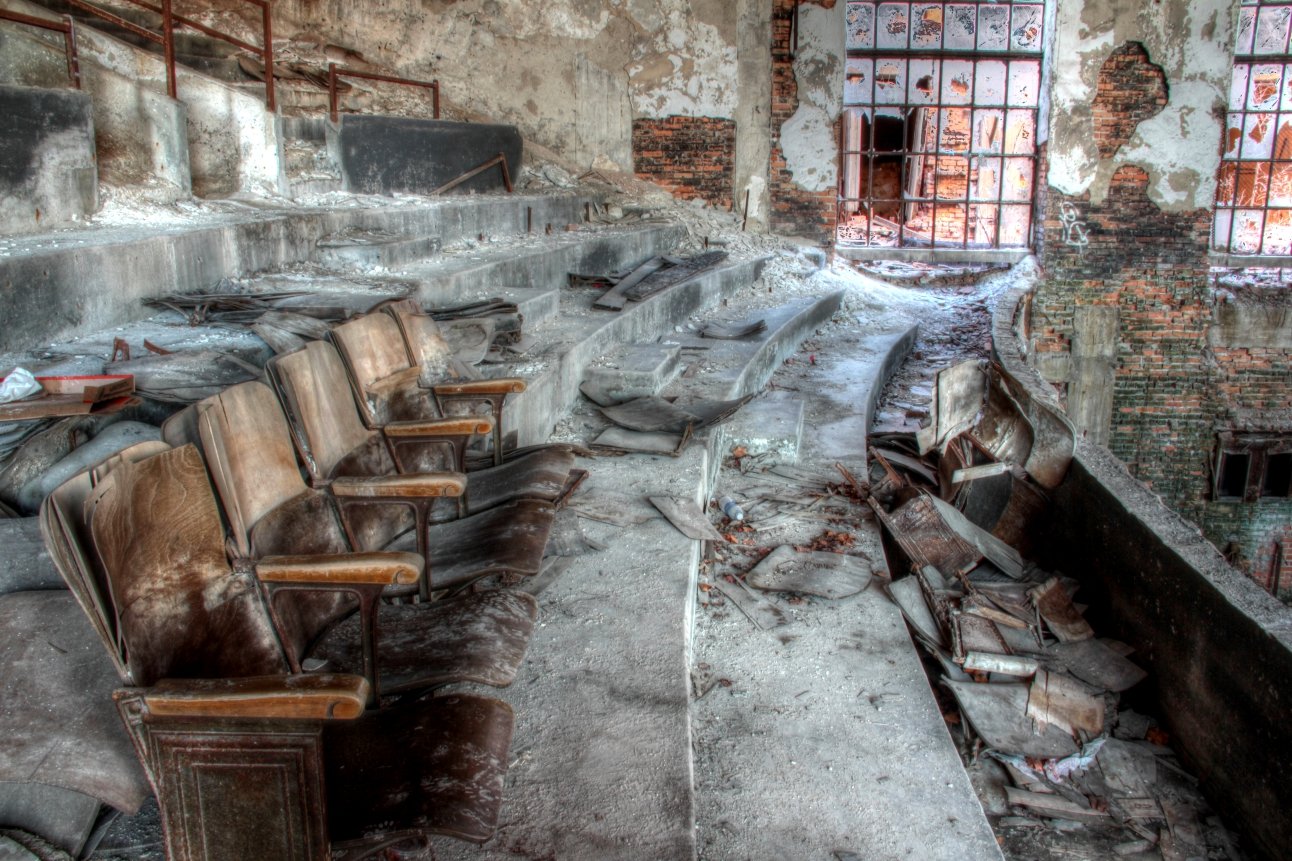 Long-time Gary residents remember the City United Methodist Church as one of the north side institutions that welcomed everyone.

The church was one of the “big three” – the YWCA, Memorial Auditorium, and City Church – where residents could all come together for various events.

Today the church still stands, but most of the complex is beyond repair. There isn’t much left of the gym; after the 1997 opened up the roof, it later completely collapsed in 2010 (below). Nearly every window in Seaman Hall is missing, and the building is crumbling inside and out. 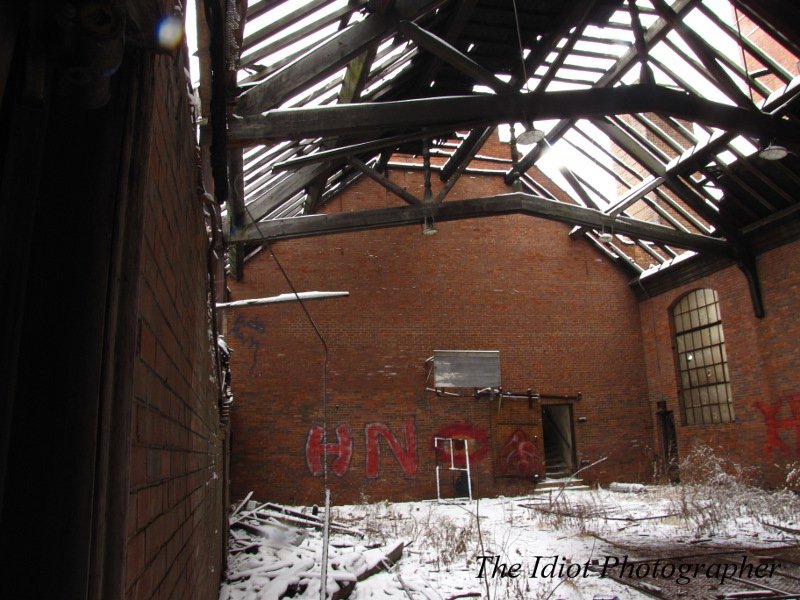 The cathedral might be missing parts of its wall and roof, but otherwise it appears to be sound. When the city planned to turn it into a ruins garden in 2006, engineers confirmed the 80 year-old church was still structurally safe. As long as the city lacks the necessary funds to take action, the church will continue to be safe from man as well.

A member of the final congregation reminds us William Seaman’s ashes are likely still buried in the church sanctuary. Will Seaman and his classic Gothic cathedral still be at the corner of 6th and Washington in 2026 for the church’s 100th birthday? 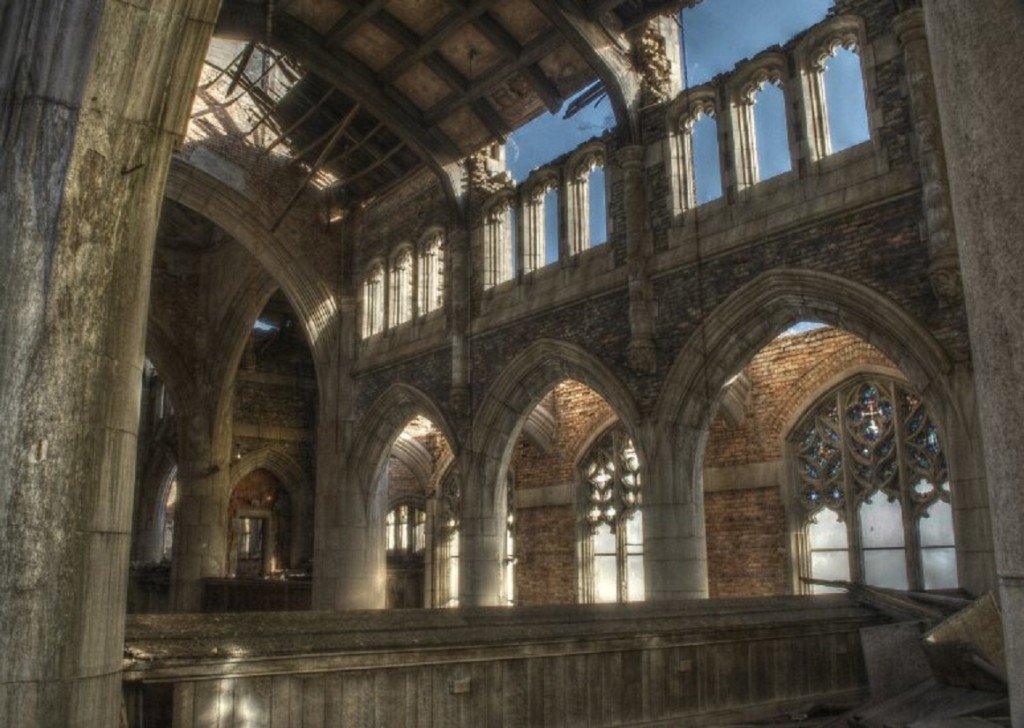