There is no shortage of abandoned schools in Gary, Indiana; the declining population over the decades has left the school district scrambling to close and reorganize schools. Annually decreasing budgets complicate attempts to maintain or repair the crumbling structures.

The Emerson School was Gary’s first high school, built in 1909. It was the proud work of a confident new superintendent and would be at the forefront of racial integration decades later. When depopulation starved the school of students in the early 1980s, the district re-organized Emerson into a Visual & Performing Arts magnet school to keep it open.

The school would last another quarter-century before mother nature would close it in 2008, one year shy of its 100th birthday.

When William A. Wirt became the superintendent of the Gary school system in 1907, it offered him an opportunity to employ his concepts under the Gary Plan.

Jefferson was the first school of Gary, opened in 1907. The school was housed in a 3-story building and built by the Gary Land Company, but it did not fit Wirt’s ideal.

Plans were quickly drawn for a second school to be built in Gary, one that would be better equipped to employ Wirt’s new education system.

In September of 1909 the Ralph Waldo Emerson School opened in Gary. It was Wirt’s masterstroke, a grand structure which featured all the latest amenities. Emerson was the first high school in Gary and was very avant-garde, even incorporating a student-run bank and a zoo.

The new learning center was the first school to have an indoor swimming pool, and combined with the double-deck gym with upstairs running track, they were among the most advanced of their kind in the world. The Emerson school was the flagship learning institution for Gary superintendent William Wirt, who would later be considered an innovator of education.

Wirt used the Ralph Waldo Emerson School to be the first to employ his revolutionary new Work-Study-Play system of education.

The constant movement would be efficient in keeping all facilities in use at all times, thus reducing cost – and it was thought the continuous change would stimulate student creativity.

These concepts, which might seem straightforward today, were revolutionary to education 100 years ago.

The Work-Study-Play concept would sweep across the United States, which was largely still utilizing the old schoolhouse method of learning at the time.

The method was controversial for its time, but it would eventually earn Wirt international fame in the 1920s.

Even in present day, schools around the world still employ concepts from Wirt’s original platoon-style system of Work-Study-Play. 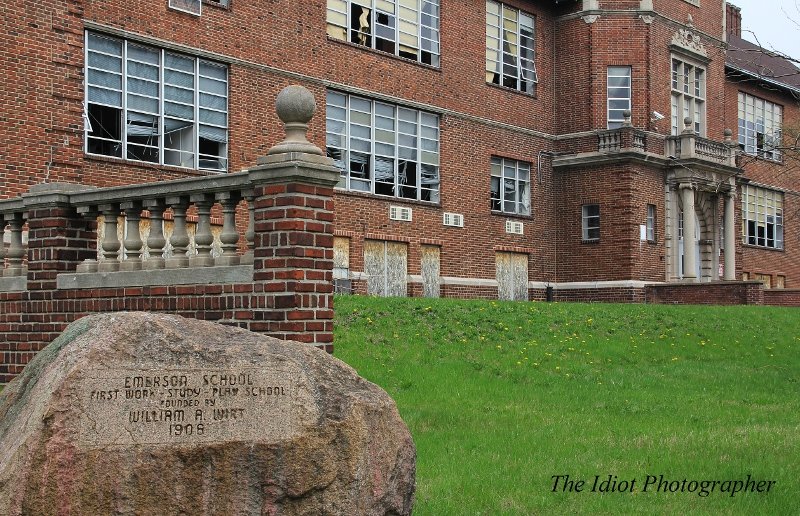 Emerson was originally a white school, but overcrowding in 1920s Gary saw the introduction of black students to white schools.

Six black students would attend Emerson in 1926, and another eighteen were allowed to attend in 1927. Many in the white community did not stand for it, and large numbers of students staged a walk-out which eventually grew into a strike.

Over 1,300 students, parents, and other protesters stood in front of Emerson School, refusing to go back inside or disperse until the school was returned to “all-white” status.

With the standoff, Wirt was forced to act.

He agreed to establish another school for black students and transferred black Emerson students to then-new Theodore Roosevelt High School.

Pressure to de-segregate Emerson would return in 1945 but the white students would march out in protest once again.

The cultural clash in Gary was large enough to even draw the attention of Frank Sinatra, who came to the Gary Memorial Auditorium as part of a benefit to ease area tensions.

Frank used his podium to speak of acceptance and equality but his calls fell on deaf ears as most of the crowd were there to see Ol’ Blue Eyes and had no interest in the protest.

By 1948, change in Gary leadership had finally brought the walls of integration in Emerson down. The Emerson School flourished for decades, but it experienced a steady decline in enrollment with the shrinking tax base of Gary.

By 1981 enrollment was so low the district was forced to transition the facility. A magnet school for the arts would draw additional subsidies to the beleaguered school district, so the financial decision for the board wasn’t difficult.

Emerson closed as a high school in 1981. It would re-open as a magnet school for the arts a year later with 120 students from grades 5 through 7. Over the years Emerson would expand its enrollment until it eventually included grades 6 through 12.

One catch: the magnet program meant no more athletics for Emerson. But what the school lost in sports, it gained in culture. Students could now major in art, dance, drama, band, piano, strings, or voice.

Confusion over the school’s mission and name persisted throughout the 1980s as the school fought to stay funded.

Students called the institution the Gary School, Gary High School, Gary-Emerson, Emerson High, or Emerson VPA. The lack of a singular name or identity forced the school board to address the issue.

In February of 1987 the school board made the name official when they finally announced the school as Emerson School for the Visual and Performing Arts – five years after it was re-opened.

The work included a stage drapery and rigging project as well as renovations to several interior offices.

A computer lab was added, and the indoor swimming pool–which had not been used for some time–was filled and turned into a shower and dressing area.

By 2007 Emerson was just two years away from its 100th birthday, and the building looked its age. Untended structural issues plagued the complex for years, and the school district could no longer work around them.

When students started getting sick, environmentalists were brought in.

It was soon discovered Emerson had a serious mold problem, although the extent of which was initially understated. A deteriorated roof and the antiquated plumbing had sprung leaks above classrooms and behind walls; by this time the mold had infiltrated most of the school.

In April a hasty evaluation of the school’s air quality convinced the board the cleanup had been a success. The Gary school board announced mold levels were reported to be within “acceptable levels.”

However a more-thorough inspection revealed the mold issues were not only still present, but more severe than originally thought.

With funds depleted, the school board had little choice. During the last week of the 2008 school year, the board announced for the next year they would shift students from Emerson to the former Kennedy-King Elementary School in Miller, on the city’s far east side (today the Benjamin Banneker Achievement Center – map).

When the bell rung to introduce summer in 2008, the Ralph Waldo Emerson School closed its doors for the final time. When the school closed, little was removed before it was abandoned. Instruments and student files had been kept and stored, but equipment, furniture, and books were left behind.

Ultimately it was a fungus that would shut down Emerson, but not before it served the Gary community for nearly 100 years. 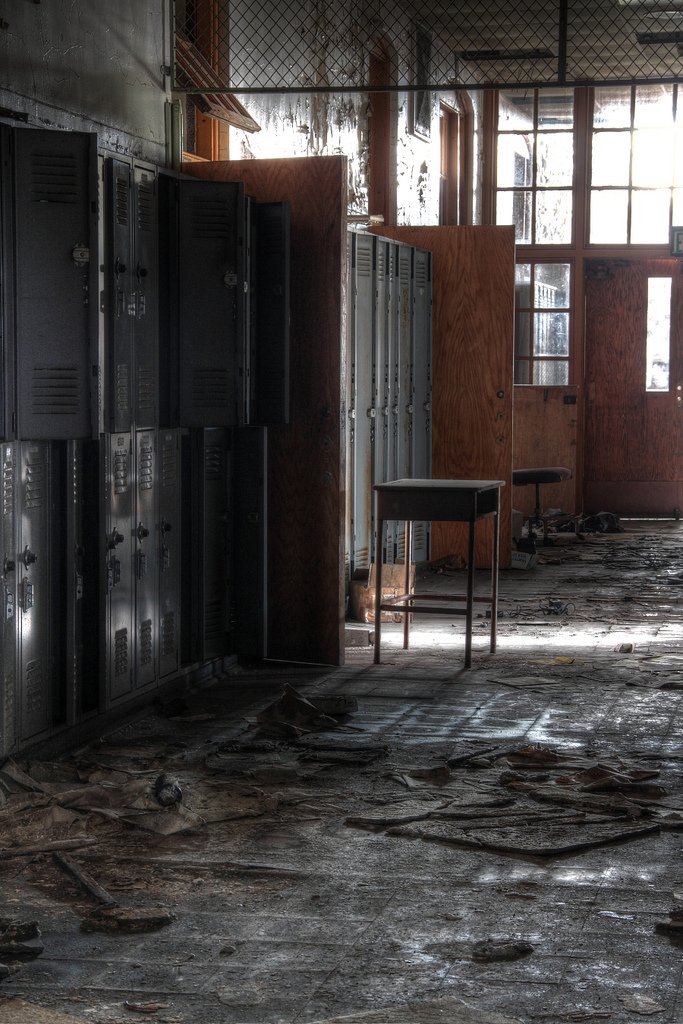 The magnet program would continue on in the  remodeled Kennedy-King Elementary building.

Gary’s school district would spend nearly $500,000 during the summer of 2008 to convert the former elementary school into a Visual and Performing Arts high school.

The school would not be converted in time for the 2009 school year, leaving the Emerson students with a partial school facility.

The school board’s financial woes would continue to worsen, and by October of 2008 they were facing a massive budget shortfall for the coming year. The board had to find a way to trim $23 million from next year’s budget.

With most buildings in the district crumbling and at half occupancy, the board unanimously voted to restructure the entire school district. Plans would call for the closure of 12 schools over the next two years.

Once again, the school board decided to relocate the Emerson VPA students.

The students, who had been moved twice in three years, affectionately referred to the locations as “E-1, E-2 and E-3.” They also shortened the new school name to the simpler “WE.”

The situation is easier to understand if one appreciates the challenges faced by Gary’s school district.

Whatever fate unfolds for the old Emerson School, it has already earned its place in history.

The now-decrepit building changed education worldwide, was an epicenter of racial tensions during the mid-twentieth century in the United States, and it witnessed everything from integration to the computer age.

Fortunately, others have recognized the historic importance of Emerson; the school was added to the National Register of Historic Places in 1995, preventing it from being demolished by man.

Unfortunately, nobody is preventing Emerson from being demolished by nature. 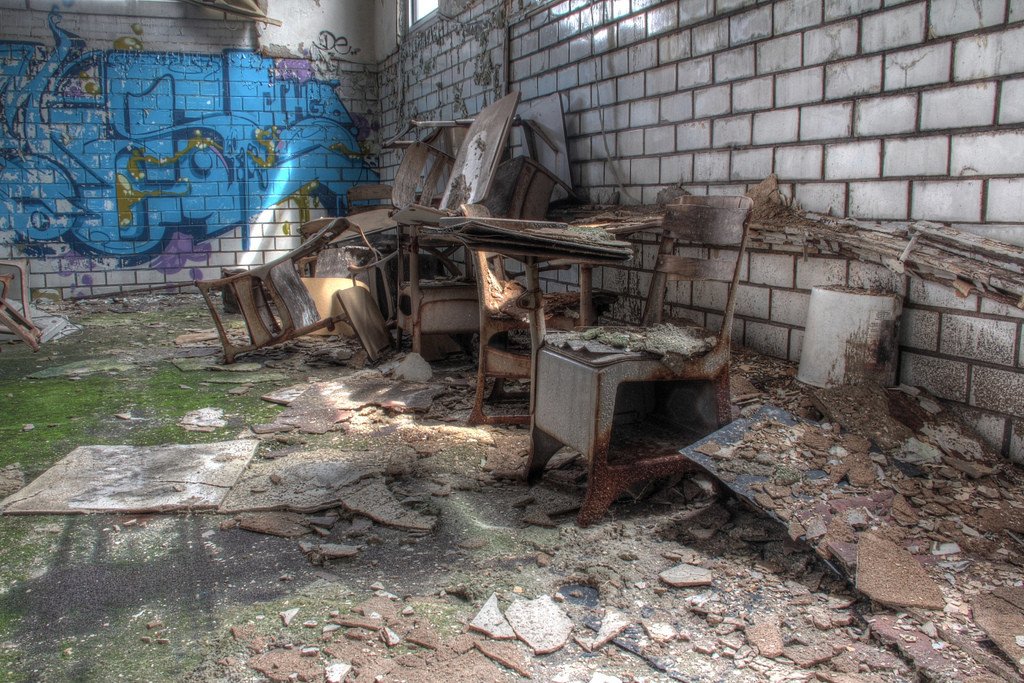