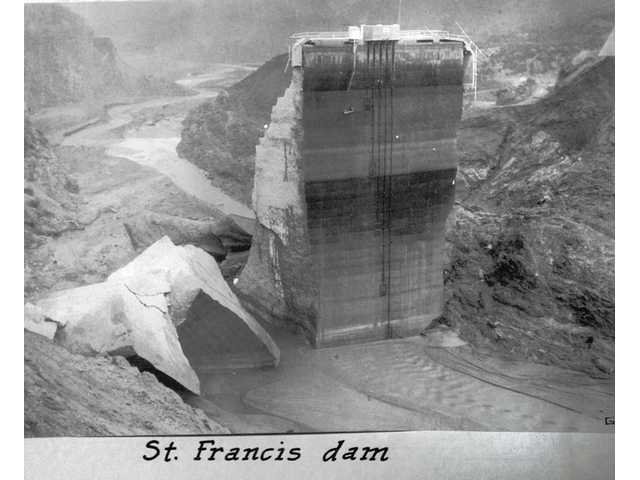 The collapse of the St. Francis Dam in 1928 is one of the worst catastrophes of the twentieth century. Today it is an engineering disaster case study.

Just before the stroke of midnight on March 12th, a dam 40 miles northwest of Los Angeles containing the largest reservoir in California catastrophically failed. What would soon follow was a massive wave of destruction that would ultimately destroy much of Ventura County and claim the lives of nearly 600 people.

William Mulholland (pictured) was a self-taught civil engineer known for thriftiness and timeliness when it came to completing large projects.

This and Mulholland’s innovations earned him quick promotions within the Los Angeles Department of Water and Power until he was eventually named chief engineer and general manager.

During the same time, the rapid growth of Los Angeles required a significant upgrade to the water supply. Mulholland was already celebrated for the design of the impressive Los Angeles Aqueduct, so he seemed a logical choice to head the project of constructing a dam to create a reservoir.

Construction on the dam started in 1924, and during the next several years Mulholland would make changes to the dam’s height and width several times during the build. Construction was completed in 1926 but it wouldn’t take long for cracks to appear near the base of the dam.

From 1927 to 1928, the new reservoir’s water level rose steadily if uneventfully. By 1928, the reservoir had reached full capacity and at the same time the dam started to show its fragility.

On the morning of March 12th, dam keeper Tony Harnischfeger discovered a new leak at the base of the dam. He immediately notified Mulholland, who inspected the dam with his assistant Harvey van Norman. Mulholland and Norman decided the leak was due to loose soil from a new access road and thus not a danger. They proclaimed the dam safe and headed back to Los Angeles.

Just before the stroke of midnight on that same day, the dam catastrophically failed. Dam keeper Harnischfeger and his family were likely the first fatalities since they lived a quarter mile from the base of the dam.

Harnischfeger’s spouse was eventually found underwater pinned between two pieces of concrete, but the bodies of he and his 6 year-old son were never found.

The dam break wave would have initially been 125 ft (38m) tall, and by the time it reached the valley it was nearly two miles wide.

The water flooded nearly a dozen towns and a significant part of the county, traveling nearly 54 miles until it reached the Pacific Ocean by 5:30 a.m.

If the water didn’t kill, the large chunks of dam floating downstream would. Huge blocks of cement were found nearly a mile downstream and would have offered a death blow to anyone in their path.

The engineering disaster claimed hundreds of fatalities; initial reports indicated 385, but this number increased as additional bodies were discovered in the following decades.

Hampering initial search and rescue operations was the time of day; the breach occurred in the middle of the night when most residents were asleep in their beds. The flooding also denied power to most of the area, resulting in the entire ordeal taking place under the cover of darkness.


Most victims were buried by the flood or carried out to sea. The bodies of those whisked to sea would slowly re-appear on local beaches for years – some as far away as Mexico.

Another victim was found as recently as 1992, buried in sediment not far from the original dam site.

In the end, there were an estimated 400 deaths from the various towns in Ventura County and another estimated 200 victims between the farmers and migrant workers in the valley.

Experts think there could still be up to 100 bodies buried in the valley, and possibly several hundred more could have been washed to sea forever.

William Mulholland immediately resigned from his post following the disaster, and went on to live his life in isolation until his death in 1935.

He accepted full blame for the incident and for the remainder of his life had difficulties in dealing with his responsibility for the lives lost.

For decades Mulholland was public enemy #1 in California and a perennial scapegoat for all engineering failures, no matter how big or small. Mulholland’s cost-cutting measures – previously lauded and celebrated – were now being cited as reasons for the failure.

The public had questions, but Mulholland didn’t have answers.

The official report concluded the failure of the dam was attributable to a poor rock foundation, a lazy approach to addressing cracks and leaks, and a lack of action by Mulholland to address the issues previously pointed out by his dam keeper.

In the 21st century, a new study of the disaster would partially absolve Mulholland and vindicate his name.

It was discovered that the dam was built on paleomegalandslide (Paleolithic-era mega landslide) that would have been impossible for geologists of the 1920s to detect.

Further, two of the world’s leading geologists of the time had performed surveys at the site and had given the go-ahead to build there.

Dam experts also say that Mulholland was not necessarily guilty of neglect due to leaking either. They assert many dams will leak, some even by design to relieve structural stresses; it is not necessarily an indication of failure.

Despite some reports absolving Mulholland of culpability, the collapse ushered in a public distrust of all prior Mulholland projects.

The aqueduct was re-evaluated, reservoirs double-checked, and his prior dams were re-enforced with more earth. The famed Mulholland Dam in Hollywood was also evaluated and re-enforced.

Today there is not much left of the St. Francis Dam; the deaths of several climbers attempting to ascend the ruins forced the Water Authority to tear down what remained of the engineering disaster.

Today overgrowth from local vegetation is all that is visible.