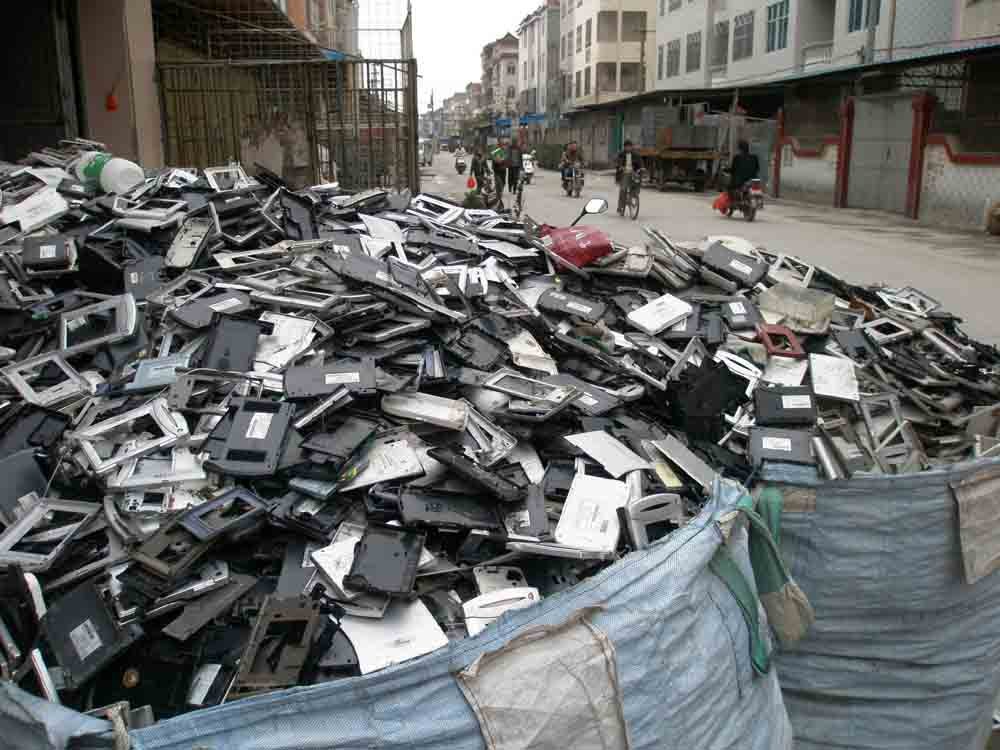 It is easy to wipe our hands of these discarded items, feeling we’ve done our part – but have we? What we don’t know is what the “recyclers” do with these parts and where the discarded items end up. You rarely hear about electronic waste sites; perhaps it is time we start paying more attention. 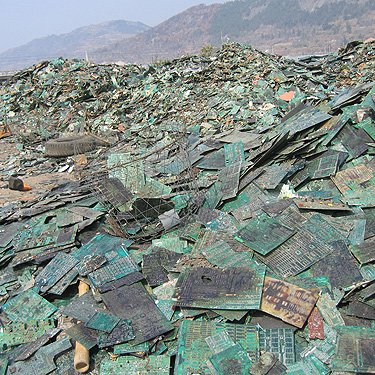 e-Waste Capital of the World

Guiyu, China is often referred to as the “e-waste capital of the world.” The city employs over 150,000 electronic waste dis-assemblers, recyclers, and salvage workers who toil through 16-hour days tearing apart discarded computers and other electronic devices.

The employees are working to recapture any metals or other parts of value that can be re-used or sold.

This is far from an organized operation; rather than having computers neatly stacked on palettes in storage units waiting to be recycled, computer carcasses are strewn about the streets and river banks.

Huge tangles of wires and cables lay on street corners.

Workers, whom will usually specialize in dis-assembling specific parts, will pull parts from the various scattered piles of parts about town and begin their work right on the side of the street. 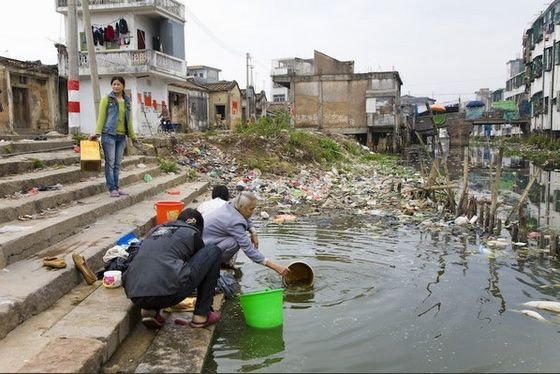 There are thousands of individual workshops where laborers snip cables, pry chips from circuit boards, grind plastic computer cases into particles, and dip circuit boards in acid baths to dissolve the lead, cadmium, and other toxic metals.

Thousands more work to strip insulation from all wiring in an attempt to salvage tiny amounts of copper wire. The air reeks of burning plastic and noxious metals, but the workers have learned to live with the conditions. 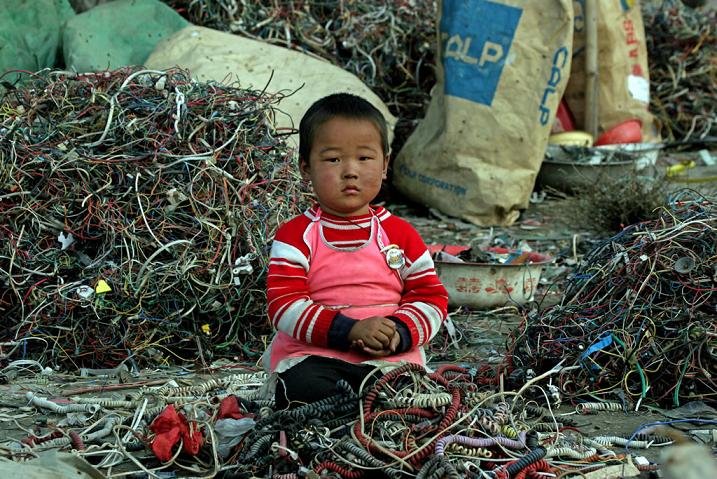 What is happening in Guiyu isn’t 100% legal, but due to the immense revenue stream officials of the impoverished area overlook the violations.

A 60 minutes TV crew featured a story on an American recycler based in Denver Colorado, and discovered that poor handling of used computer parts starts here with the companies that take used parts under the guise of “recycling.”

This particular recycler was not shy to boast of its green principles, and publicly chastised competitors for selling electronic waste to the lowest bidder overseas rather than following proper recycling procedures.

Despite these claims of propriety, the 60 minutes crew followed a shipping container full of used CRT monitors from this recycler in Denver directly to China where they discovered it was actually being sold to Guiyu for illegal tear-down.

What many of the worldwide recyclers are doing is charging the public a fee for the disposal service, then reaping additional profits by selling the waste to the Chinese.

Legality and morality aside, it’s a profitable business for the recyclers; they have few costs, customers pay them to take the product, and they can turn around and sell the product to another party. 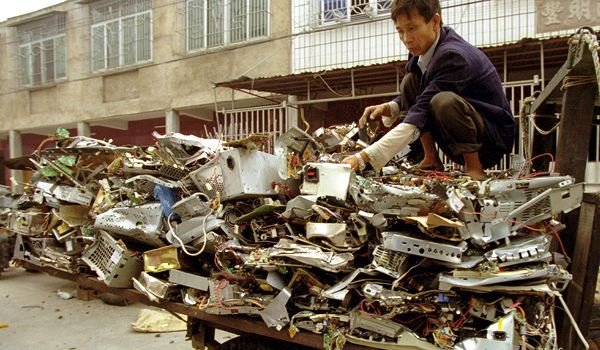 In some cases they also receive tax breaks from the U.S. Federal government due to operating under the guise of “green” recycling operations.

The Chinese take all of the used parts and strip away the items with no value – usually anything that isn’t metal – in an effort to retrieve valuable resources to sell for scrap.

Why Not Shut It Down? 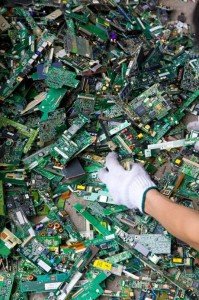 It’s not that simple.

China officially bans the import of electronic waste, but the allure of massive revenues to local governments trumps human rights.

Complicating the issue is a shortage of raw materials for major industry in China; factories are clamoring for the materials retrieved from the scavenging and they pay top dollar.

As long as the business is profitable and kept largely out of world view, it is unlikely to face reform.

Further, it’s not as easy as simply asking government to enforce the rules; Guiyu’s entire economy is centered around this industry and its livelihood depends on it. 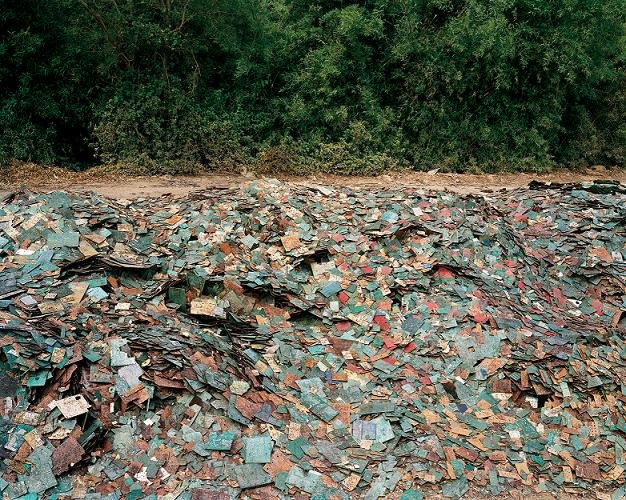 If regulators shut down GUIYU’s operations, over 150,000 people would be unemployed. 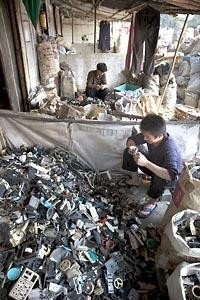 Also to consider: if Guiyu’s operations were shut down, they would be continued elsewhere. Guiyu isn’t the problem; people of the world will still require disposal of their used electronics and suppliers will still pay for the recovered raw materials.

It is a situation with many factors to consider before a practical solution can be determined.

Chinese officials that acknowledge the problem are quick to point to the United States and other industrialized countries as being the primary source of the problem. Claims one Chinese professor:

“The biggest responsibility lies in the developed countries that export e-waste.” 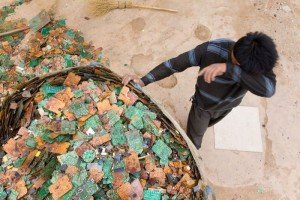 While much of the culpability certainly lies at the feet of the industrialized nations who create and export waste, officials in China aren’t doing much to stand in the way. 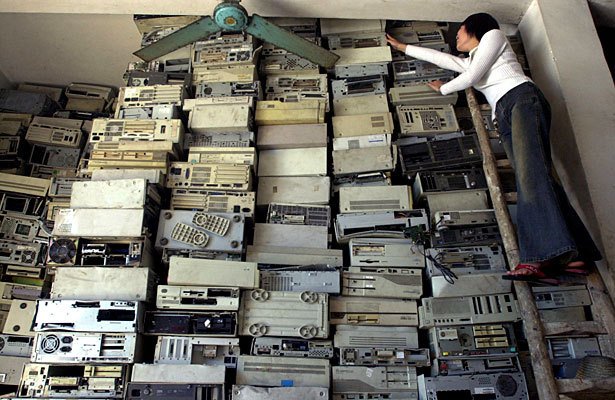 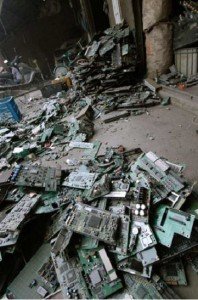 Not helping the overall problem is the increased cost to properly recycle used parts. Workers in China will recover about $1.50 to $2 worth of valuable commodities from an average computer.

With such low yields e-waste recyclers in the United States can’t cover their costs, much less turn a profit. This tempts recyclers to sell the parts to China, where labor is less expensive and there is room for greater profit. Fixing the process would be very difficult since it is a “lowest bidder” system driven by money and budgets.

A cash-strapped public school can’t afford to pay a premium to recycle old computers; they will find the lowest bidder. Not surprisingly, the lowest bidders are the ones who keep their costs low by exporting to China. 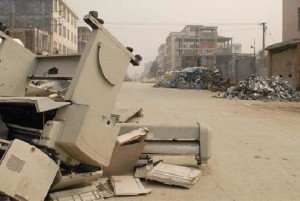 It is estimated Guiyu earns over $75 million dollars a year from the processing of over 1.5 million tons of e-waste – and those numbers increase every year.

Supply lines won’t dry up anytime soon. In 2011 the United States is throwing away about 130,000 computers every day. One hundred million cellular phones are thrown out annually, and that number is increasing at an exponentially faster rate as the world moves toward the mobile platform.

That is just the export from one industrialized country. 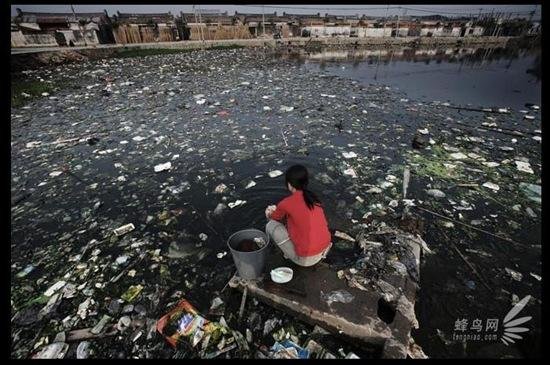 The environmental and health side effects are extremely damaging; the air is not safe to breathe and the water not safe to drink. Lead and other poisonous metals course through the veins of the residents.

Greenpeace sent crews to Guiyu to measure ground samples and test the water supply. Over 10 heavy and poisonous metals were found: lead, mercury, tin, aluminum, and cadmium being the most prominent.

Drinking water has to be trucked in as the local river and underground water table are poisonous. Guiyu has the highest level of cancer-causing dioxins in the world; pregnancies are six times more likely to end in miscarriage and seven out of ten children are born with 50% higher levels of lead in their blood than children born elsewhere. 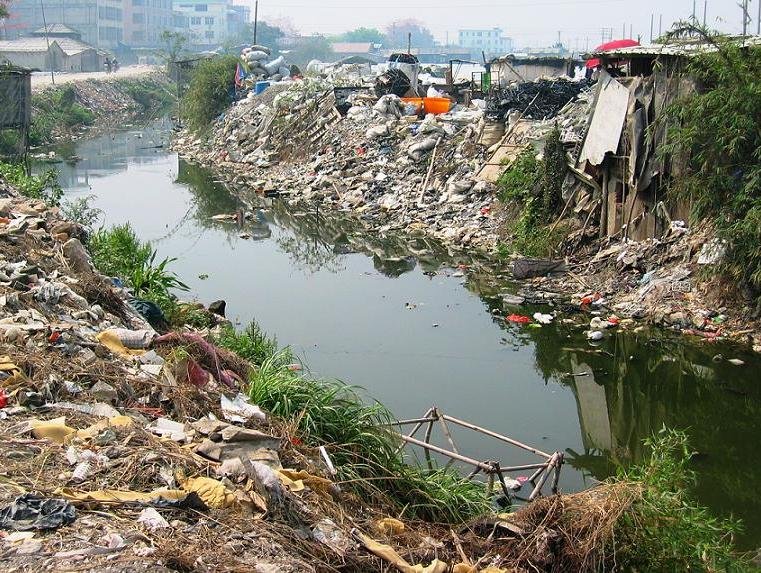 Workers will burn circuit boards and components over coal fires to melt the lead solder and separate the metals; this releases noxious gasses into the air and toxic materials into the ground.

Plastic cases of computers, phones and PDAs are melted, producing poly-chlorinated dioxins. Once the raw materials have been separated from the waste, they are sold for re-use.

“If you burn it, you can tell what kind of plastic it is. They smell different. There are many kinds of plastics, probably 60 or 70 types.”

The residents are only partially aware of the significant negative health effects. They understand that conditions aren’t ideal, but the higher-than-average wages keep them working in Guiyu. 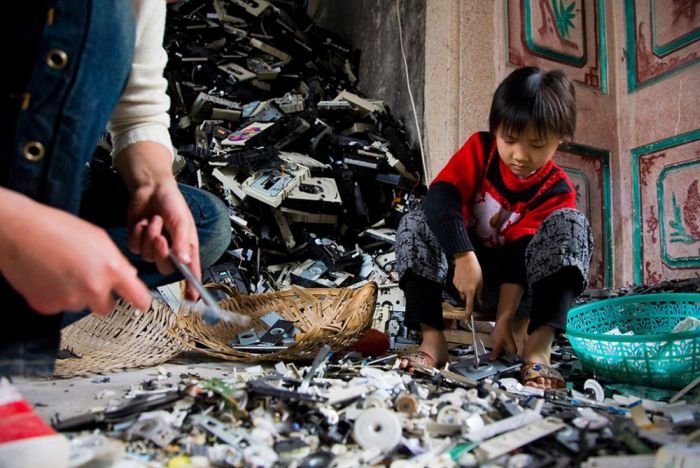 Dis-assemblers in Guiyu earn about $8 a day, almost five times what they previously earned as farmers and laborers.

With a lack of other major industry in the area, many more were previously unemployed so destitution drives them to the hazardous work.

In fact, many actually move to Guiyu in hopes of seeking out the higher wages. Activists have lamented that these people must choose between poverty and poison, something no person should have to do. 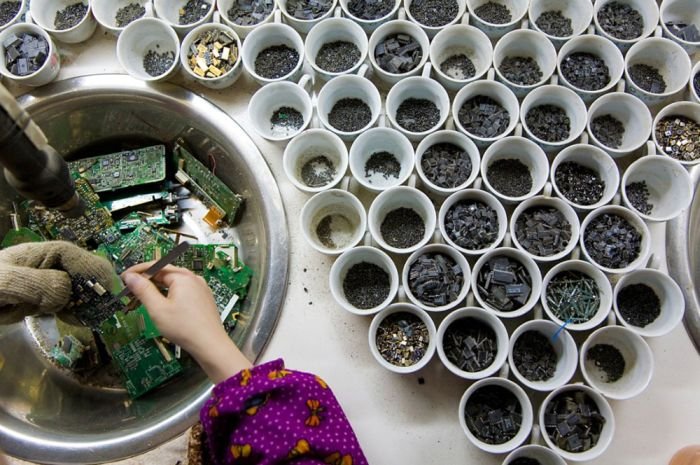 A sad reality of Guiyu is 88% of workers suffer from neurological, respiratory, or digestive abnormalities.

Workers use their bare hands for dis-assembly of parts and sweep excess printer toner from the streets into the river. 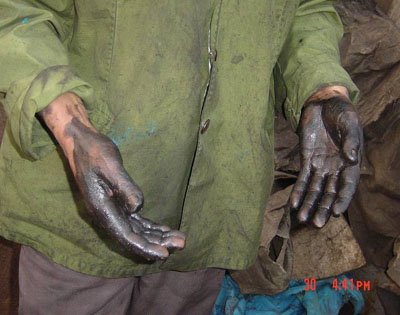 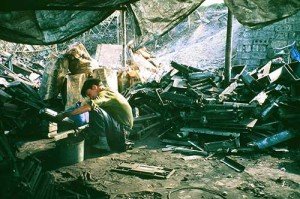 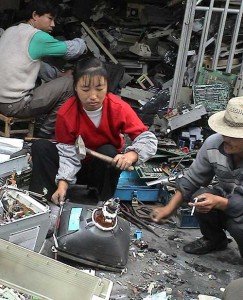 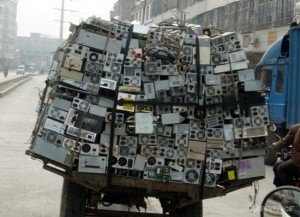 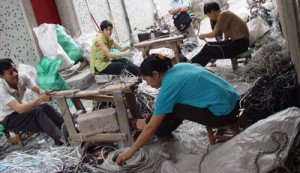 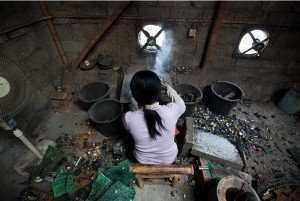 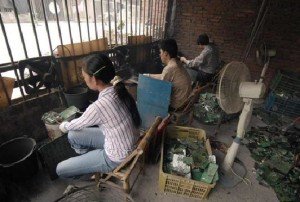 As of 2011, Guiyu is listed as the world’s second most polluted location on Earth. Lake Karachay is the first.