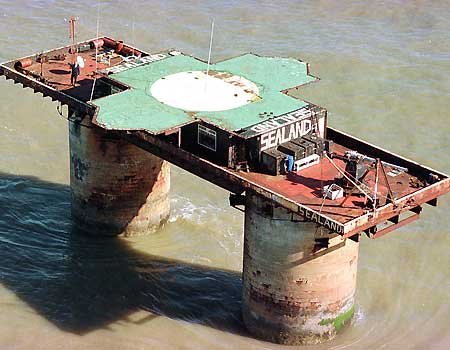 Considered more of a principality, the micronation of Sealand is located on an old British World War II radar platform. It was a Maunsell Sea Fort constructed by the British military in 1943, and originally given the name HM Fort Roughs.

Later it would be renamed Sealand by Major Paddy Roy Bates, who would live there with his family and host a pirate radio station.

The HM Fort Roughs was originally constructed to protect major shipping lanes for the British during WWII; German mine-laying aircraft were targeting the area and increased radar and defense was needed. A location six miles off the coast of Suffolk was chosen, and once constructed the station was home to nearly 300 Royal Navy personnel.

It wasn’t until 1956 when the last assigned personnel were removed from the station and operations ceased that Sealand’s story starts to get more interesting.

A gentleman named Roy Bates later claimed the Fort as his own, re-named it the Principality of Sealand, and insisted that from then-on he was the Prince of Sealand. Bates has since introduced a constitution, flag, national anthem, currency, and even independent passports.

How is this allowed? Sealand sits 6 miles off the shore of Britain, which cites its own territorial waters as only reaching 3 miles offshore (this was later increased to 12 miles in 1987). Technically, Sealand is located in international waters and had no official governing body.

And thus, the world’s smallest country was born.

In 1978 there was a hostage incident on Sealand when a German lawyer named Alexander Achenbach, claiming to be the Prime Minister of Sealand, stormed the sea fort with German and Dutch mercenaries and took Roy Bates’ son Michael hostage. Not long after, Bates was able to retake the tower and captured Achenbach and the mercenaries. Achenbach, a holder of a Sealand passport, was charged with treason by Sealand and was held unless he paid over $35,000 in restitution. The event was important enough to get the German government involved; they had sent a diplomat to Sealand to negotiate a release of Achenbach with Bates. Once freed, Achenbach and his associates returned to Germany and established a “government in exile” of Sealand, still claiming to this day they are the legitimate ruling authority.

Why the demand for a run-down 70 year-old radar station? The international water rights are key, and it’s the laissez-faire attitude most governments take regarding Sealand that drives its appeal: no established government wants to be bothered with the responsibility of servicing and controlling Sealand. Given this, all sorts of interesting individuals looking to circumvent government regulation want to establish their businesses there.

In the 2000’s, Sealand was a proposed site for an offshore Internet server farm. The appeal of hosting websites at a location without government regulation shouldn’t be difficult to understand; gambling, pornography, and terrorism would certainly have fewer obstacles to deal with. Copyright and other infringement issues would be more difficult to enforce.

Mr. Bates took advantage of Sealand’s lack of regulation and in August of 2000 established Internet host company HavenCo. Operations of HavenCo were later shuttered in 2008 without explanation.

Perhaps even more bizarre is the fact Sealand has “national” athletes based all over the world. Among others, Sealand can boast of a marathon runner based in Canada, a U-20 soccer team in Kentucky, a competition airsoft team out of Yorkshire, and a Kung Fu specialist who won two silver medals at the World Cup of Kung Fu.

Sealand also has a Destination Imagination team in Dobbs Ferry, New York, a fencing team at UC Irvine, and in 2008 they hosted a Red Bull skateboarding event. They also founded a soccer league. In 2008 the Sealand egg-throwing team won the world championship (Ed: we didn’t know there was one either). Fun fact: not a single athlete competing for Sealand has ever set foot on Sealand, and as of the date of this article the current population is estimated to be “around 4.”