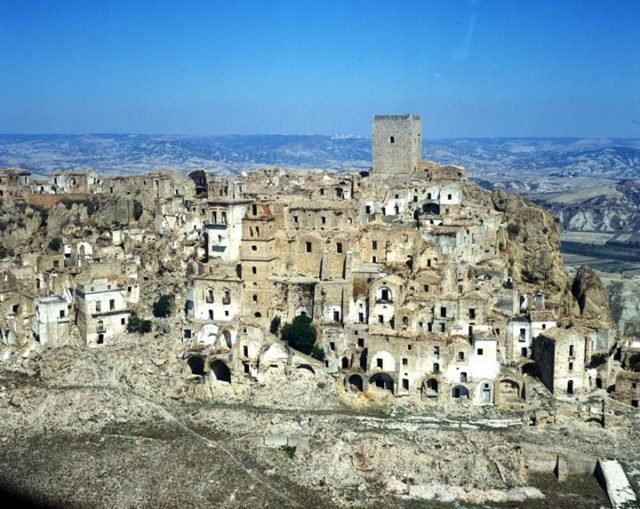 Craco, Italy is a commune and medieval village located in the Region of Basilicata and the Province of Matera, about 25 miles inland from the Gulf of Taranto at the instep of the “boot” of Italy.

The medieval village is typical of the hill towns in the region with mildly undulating shapes and the lands surrounding it sown with wheat. Around 540AD the area was called “Montedoro” and inhabited by Greeks who moved inland from the coastal town of Metaponto. Tombs have been found dating from the 8th century suggesting the original settlement dates to that period. Today, earthquakes, landslides, and a lack of fertile farming land have contributed to the abandonment of Craco.

From 1154-1168 the village first saw feudal rule under Eberto.  In 1179, Roberto di Pietrapertos became the ruler of Craco. By 1276, a university had been established in town. It was during this period in the 13th century that the landmark castle was built under the direction of Attendolo Sforza.

In 1293 under Federico II, the Castle Tower became a prison and by the 15th century the town had grown and had four large plazas.

By 1799 there was enough impetus to change the feudal system and an independent municipality was established. In 1815 it was decided the town was large enough to divide into two separate districts. 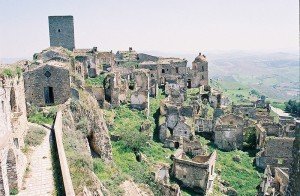 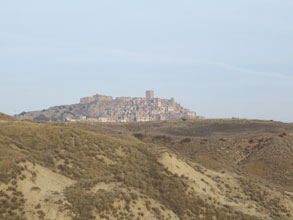 From 1892 to 1922, over 1,300 Crachesi left to settle in North America because poor agricultural conditions created desperate times as the land was no longer useable for farming or grazing.

During the mid-twentieth century recurring earthquakes began to take a toll on the town. Between 1959 and 1972, portions of the village were severely damaged and rendered uninhabitable by a series of landslides.

This geological threat has only been known to scientists since about 1910.

In 2011, Craco sits uninhabited. In 1963 the last 1,800 inhabitants were transferred to a valley in a locality called Craco Peschiera.

As of the date of this post, that population is down to about 970 inhabitants. As beautiful as Craco is, the land and location have proven not suitable for habitation.

Because of its unique and particular landscape, Craco has been the set of many movies. King David, Saving Grace, Nativity, and Quantum of Solace are some of the more famous films that have used Craco as a backdrop.

In The Passion of The Christ, Craco Italy is where the hanging of Judas scene was filmed. 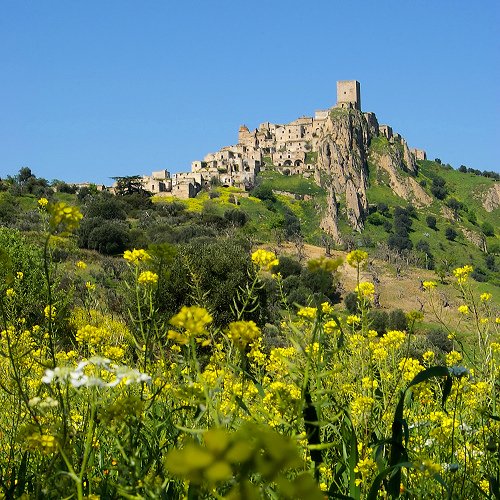