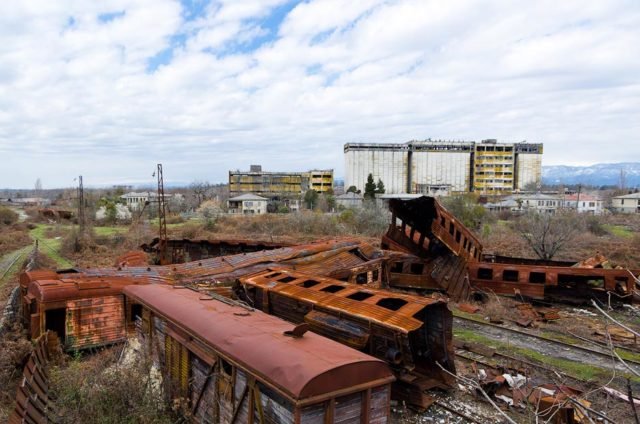 On the east coast of the Black Sea, about 125 miles (200km) south of Sochi, sits the shell of a once-vibrant town. Ochamchire (also Ochamchira) was once a pleasant coastal retreat in Georgia, but an ethnic war following the dissolution of the former Soviet Union resulted in the territory becoming largely abandoned.

Now the city is part of the Abkhazia Republic, and less than a tenth of the city’s pre-war population remains. With entire city blocks abandoned, Ochamchire is a shell of its former self. Today many of those who stayed are trying to take care of what’s left for a population that won’t return. 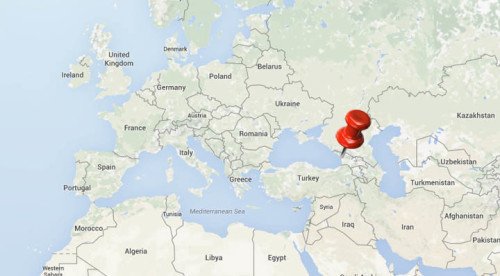 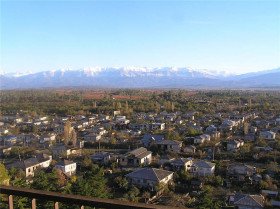 The mountainous territory of the Greater Caucasus in northwestern Georgia is as beautiful as the region’s history is turbulent.

Not far are the eastern coastlines of the Black Sea, which offer hundreds of miles of sandy beaches with spectacular water views. Today this region is the partially recognized republic of Abkhazia, however it was a territory of Georgia until 1992.

Abkhazia has a rich history – both figuratively and literally – as it was once a Greek colony and later one of the wealthiest provinces in the former Soviet Union. Ochamchire was the site of the ancient Greek colony settlement of Guenos. Later, the Romans left baths and medieval defensive stone walls still visible today. After the Roman occupation the region saw a decline; by the thirteenth century the ancient Greek city became overgrown.

In the fourteenth century Genoese merchants established a trading post on the site of present-day Ochamchire. Known as Ala Gunda, the market became celebrated for its craftsmanship and sword trade. After the Turkish invasion came decades of Turkish occupation. Turkish influence led to a renaming of the site: Oshimshir (later Ochamchire), from the Turkish “shamshir,” or sabre.

Conflict After Fall of U.S.S.R.

Behind the economic growth of the twentieth century was a burgeoning divide between two groups: Those native to the Abkhaz region and the ethnic Georgians. Northwestern Georgia was a war zone for much of the 1990s, and the result was a separate state. A de-facto, independent, and only partially recognized republic named Abkhazia.

The Abkhaz people consider their independence a liberation from Georgia, while Georgians believe that historically, Abkhazia has always been part of Georgia, and thus this was a secession. Regional tension had been high before, but when the Soviet Union was officially dissolved in 1991 it sparked revolutionary power struggles around its many republic states.

What followed in Georgia was an ethnic cleansing of Georgians in Abkhazia. Before the Georgian-Abkhaz Conflict, Georgians formed the largest ethnic group in Abkhazia, accounting for 45.7% of the population.

In 1992 a military confrontation between the Georgian government and Abkhaz separatists would begin a two-year war, leaving the separatists the victors.

“I lived in Abkhazia 15 years ago, in the small town of Akhaldaba, Ochamchire district. Abkhaz attacked our village on September 16th, 1993. IT WAS IMPOSSIBLE TO HIDE anywhere from the bullets which rained down on us.”

By the summer of 1993 the physical fighting in the Caucasus slowed as the war came to an end. The Abkhaz separatists had won but paid a price for freedom. Abkhazia had lost its industry, two-thirds of its population, and was in ruins.

The new de-facto independent state of Abkhazia was only recognized by Russia, not the United Nations or the world at large. This meant no trade with the rest of the free world, leaving Abkhaz towns such as Ochamchire without a “legal” economy. That side effect would result in the departure of not only ethnic Georgians, but also the Abkhaz themselves, as many left searching for jobs and better opportunity.

Amputating the region from Georgia cost an estimated 8,000 to 10,000 lives and displaced roughly 250,000 Georgians. More than 20,000 homes owned by ethnic Georgians were destroyed. Hundreds of churches, historical monuments, hospitals, and schools were also pillaged and destroyed.

The Organization for Security and Cooperation in Europe (OSCE) has recognized the ethnic cleansing thrice: First in 1994 at the Budapest summit, then in 1996 in Lisbon, and again in 1997 in Istanbul.

A 1994 report from the U.S. State Department described the actions:

“The [Abkhaz] separatist forces committed widespread atrocities against the Georgian civilian population, killing many women, children, and elderly, capturing some as hostages and torturing others … they also killed large numbers of Georgian civilians who remained behind in Abkhaz-seized territory … Those fleeing Abkhazia made highly credible claims of atrocities, including the killing of civilians without regard for age or sex. Corpses recovered from Abkhaz-held territory showed signs of extensive torture”

In March of 2006 the Hague War Crimes Tribunal announced the results from its full-scale investigation. The Tribunal concluded it would prosecute and start hearings against the separatists who had committed war crimes.

By May of 2008 the United Nations officially recognized the atrocities when it adopted resolution A/RES/62/249, which “emphasizes the importance of preserving the property rights of refugees and internally displaced persons from Abkhazia.”

In July of 2008 Abkhaz separatists rejected a German-mediated peace plan and refused to attend peace talks in Berlin.

Russia has continued to get involved, and not always for the better. In 2008 the country sent troops into Abkhazia without obtaining the legal consent of Georgia. The following year Russia planned to establish a Black Sea naval base at the port of Ochamchire, however plans were later abandoned when it was announced they were not practical.

It first earned city status in 1926, although it hosted a Batumi Black Sea border ship detachment since 1923. In 1967 it became the base of the 6th separate border patrol brigade (which later relocated in 1996).

While under the Soviet umbrella the region experienced relative prosperity. From 1921 until 1931 Abkhazia enjoyed the same status as Azerbaijan, Kazakhstan, and other Soviet republics. It gained factories, ports, and a railroad, resulting in an economic boom.

But Ochamchire would suffer heavy losses throughout the conflict. Numbers vary, but it is estimated 400 Georgian families were killed in Ochamchire during the Abkhaz offensive. The Kochara district alone saw 1,000 homes destroyed.

Physical conflict has subsided although the region is far from healed. Ochamchire still maintains a small population which acts as a skeleton crew to keep portions of the town operating and tidy.

But most of the town is eerily empty. You wouldn’t know the town was occupied if not for the occasional sound of a woman sweeping her porch. Visitors have reported seeing more stray animals than people.

The majority of town still wears scars from war. Almost everything have been vacated; empty houses still have outlines of flames above blackened windowless frames. Roofs seem to be sporadically missing tiles, some offer vegetation a place to escape from inside.

Roads were shelled into Swiss cheese, and the town’s train station is still in shambles. The stump of a sculpture sits in front of a destroyed hospital, robbed of its feature decades ago. Soot stains are tattooed across entire neighborhoods as a grim reminder of the town’s past. 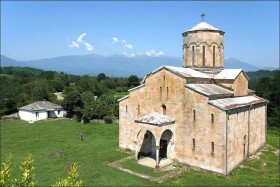 Some homes had effects left behind, items that managed to escape the pillaging over twenty years ago; an old TV or typewriter here, a broken desk or wardrobe there.

Despite the turbulent history there are places in the district worth visiting if one has the opportunity, including the aforementioned ruins of the ancient Greek colony of Guenos, the giant Abriskila Cave with its underground stream Achkitizgo, and the ancient Mokvi Cathedral (pictured above right).

Tourism opportunities are understandably limited with the economic choke-hold on the region, but the people who remain are warm. Much of the youth lack their parents’ vitriol toward the other side. Elders vividly remember the war; nobody is proud of it. Few can easily or often discuss such matters.

Hopefully lessons are learned. Similar to the forced-evacuation of the abandoned resort in Varosha, Cyprus, the Georgians separated from their homes in Abkhazia were merely collateral damage to a greater ideological difference. It is a shame that such disagreements can prevent coexistence.

One has to wonder if the result is better than the previous arrangement. Did the removal of ethnic Georgians improve things for the Abkhaz? If the fortunes of Ochamchire and its former residents are any indication, it would appear not.

Watch: A Drive through Ochamchire

“The town is mostly silent now,
though the scars still left run deep.
Ethnic cleansing not the sort of mess,
that can be washed away with bleach.”

“To the victors go the spoils,
revenge is a dish best served cold,
while in the survivors lives they toil,
for everyone eventually grows old.”