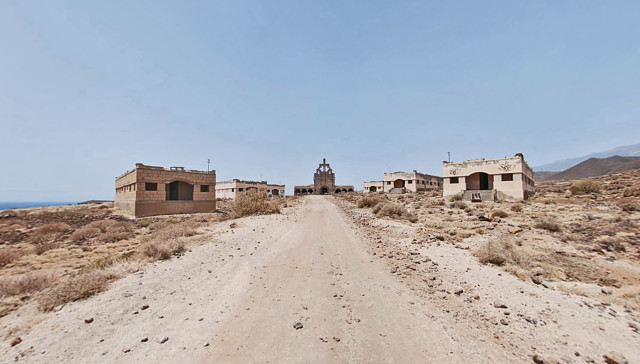 The Canary Islands are well-known for their warm weather and water sports. Largest and most populous of the islands is Tenerife, which offers hiking trails, historic villages, local pubs, sandy beaches, water slides, and a national park featuring one of the world’s largest volcanoes.

Yet what you won’t find on tourism flyers is one of the more interesting places to see. On the Southeast coast of Tenerife, just up the hill from a newer small village, the remains of an aborted early twentieth-century sanatorium still bask in the bright sun. 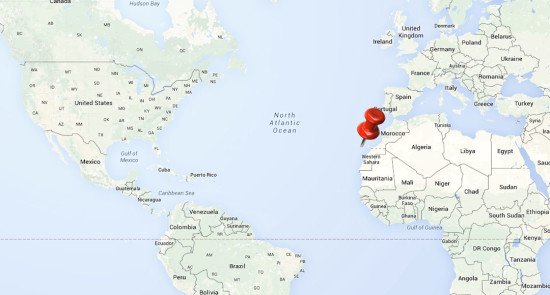 During the Spanish Civil War (1936-1939) an outbreak of leprosy on the island of Tenerife began to raise alarm; by 1940 a total of 197 cases had been reported. Early medicine lacked a familiarity with the infectious disease, and this was reflected in crude methods of therapy and treatment of the afflicted. 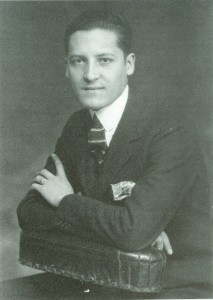 At the time it was believed quarantined isolation in an arid, temperate climate was the most appropriate solution to dealing with the malady. Tenerife’s first leprosy station was on the north side of the island. The second would be located in Arico, near “Los Abriguitos” and present-day Abades (map).

The location was also conveniently out of the way of the public’s eye. Spanish ruler Francisco Franco’s Falange military would oversee the southern leper colony project, which was given the green light in 1942.

Spanish architect Jose Enrique Marrero Regalado (pictured above right), was well-versed in neo-canario monumental design, and tasked to pen the sanatorium structures. He is also credited with the Basilica in Candelaria, the Cabildo and the Mercado de Nuestra Señora de África in Santa Cruz, and the Siboney Building in Santander, Spain.

The “Sanatorio de Abona” consisted of forty buildings, including a crematorium, dormitories, a hospital, and the impressive church. Patients were to be separated for the healthy and sick by gender. The sanatorium itself contained a dining hall, exam rooms, temporary residential quarters, and a recreation area.

However more effective in fighting leprosy was a new drug Dapsone, an antibiotic which began to see use for treating leprosy in 1945. Three years into its construction, the Sanatorio de Abona was already obsolete.

The project was cancelled and construction froze, leaving different buildings in various stages of completion. Nearly eleven million pesetas had been spent on the town’s construction.

For the next two decades the half-built town lay dormant, occasionally visited by hunters and fishermen of Los Abriguitos – but few others.

[ In 1986 Los Abriguitos was deliberately replaced by Abades, an organized and purpose-built village established by authorities to prevent unauthorized wooden shacks from sprouting up on the Tenerife beach and creating a shanty town. ]

This changed in the 1960s when the military found a use for the former sanatorium as a training facility. The “Escuela de Magisterio” was in service until 2002, and was best-known within the ranks as a facility for target practice and urban warfare training. During the tail end of that period (from 2000-2002), it specifically served the 49th Infantry Regiment as an urban warfare training center.

Several items today remind of the former military use. Squadron graphics adorn walls and traces of used ordnance can be found when walking the grounds. Remains of once-organized wired fencing still linger. 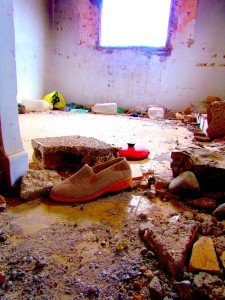 In 2002 the approximately 222 acre (900,000 square meter) hilltop property was to be sold to an Italian investment group for 17 million Euros. The new owner’s intentions were to build a seaside 3,000-bed resort featuring every amenity and two golf courses, for good measure.

The town of Abades was enthusiastic about the deal; town authorities glowed in anticipation of the activity and revenue such a resort would bring the community.

But a series of tourism control laws instituted by the government curbed any development. A 2001 moratorium on expansion and the construction of new resorts was the first major blow to development hopes for the former Sanatorio de Abona. Known as “La Ley de Moratoria Turística” (the tourism moratorium law), it was intended to preserve the island’s culture by restricting over-development.

Thus the deal fell through and the hilltop next to Abades would not be developed. Once again, the former sanatario was in limbo.

Over the years the buildings of the Sanatorio de Abona have seen limited use – both authorized and unauthorized – while they have slowly decomposed. Paintballers and ravers have taken the liberty of using the grounds on occasion. Graffiti artists have had more than a decade to add their contributions.

In 2008 the property was used as a filming location for several scenes of the “Plan América” Spanish series by TVE.

Aside from the ominous militaristic entrance gates, the grounds today are what one would expect of abandoned Tenerife: More peaceful than spooky.

Sounds are limited to the distant waves crashing on shore, a slight thrum from the windmill farm next door, and the occasional flapping of wings from a Pigeon roosting in one of the abandoned buildings.

A glance back at Abades reveals a beautifully organized coastal community where everything matches: White stucco, green windows, and red roofs. In the winter the town is sleepier than the summer, when it becomes a bustling seaside village.

On most days at the Sanatario de Abona there is no human activity and little movement. A few windows have tattered drapes, pulled outside by the wind and punished for not yet yielding to the elements.

The former dormitory rooms have broken beds and wiring has been pulled out of all buildings and exposed, long-ago pilfered for its copper. The most visually-stunning structure is the church (pictured at left), with its comparatively large façade.

The importance of the Catholic Church during Franco’s regime is observable via touches such as the enormous cross which overshadows the abandoned Tenerife sanatario. This display is a relic from Franco’s National Catholicism ideology.

Today the church is an empty shell, still unfinished from when the sanatorium construction was aborted.

This building is also the most popular with visitors in abandoned Tenerife. Artifacts and trash are scattered about in rooms of this building. Empty coke bottles and cigarette packs litter the floors. Files, papers, and bags are strewn about.

Red splotches across one room speak to the carnage of a former paintball battle that ended in bloodbath.

“Lonely wild west town of concrete, on a peaceful island lies,
sleepy buildings in the sun, a tourist town at rest close by.

One a town of life, the other a town where no one ever died,
the days continue passing, as endless as the tide.”

How to Get There 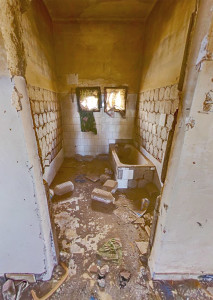 The former Sanatario de Abona blends in to the landscape, but the town of Abades is visible from the main Tenerife highway TF-1 (Autopista del Sur). Exit 42 (TF-629) will take visitors to Abades. Head down the main avenue (Av. Ocira) past the tennis & soccer fields. When the avenue reaches the shore, park and set out on the beach on foot.

The walk is more of a hike and not for the week or unfit. There are several paths to get to the former sanatario, but the most common is to head 500 feet (152m) northeast across the beach. Take the footpath on the other side up and around its hairpin turn to connect with the dirt track that heads back up the hill.

After 300 feet (91 m) there will be a fork in the dirt track, either direction takes visitors to the Sanatorio de Abona. To the left is the church and one set of separated dormitories, to the right is another set of dormitories, the main hospital, and some administrative buildings.