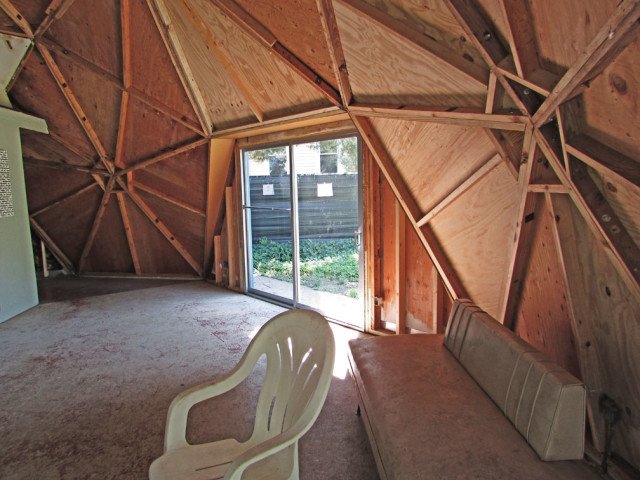 It would probably look a little out of place in just about any neighborhood, let alone sitting on a grassy corner lot in the Midwestern college town of Carbondale, Illinois.

This dome home–looking for all the world like a half-buried golf ball jutting up from the soil– certainly does stand out, surrounded as it is by far more traditional box-shaped one- and two-story houses. But it is more than just an incongruent eye-catcher in this otherwise typical neighborhood. It is a bit of Americana and a bit of history, architectural and otherwise.

From 1960 to 1971, it was the home of Buckminster Fuller (pictured), and is the only dome that Fuller himself ever lived in. Interestingly, it also represents the only property that Fuller ever owned.

Fuller, of course, had been promoting geodesic dome construction, along with many other architectural and design innovations, for many years.

Born in 1895, Fuller would, along with patenting the geodesic dome, also coin the term “Spaceship Earth,” author over 30 books, and manifested various breakthroughs in cartography, transportation, and other feats of engineering. 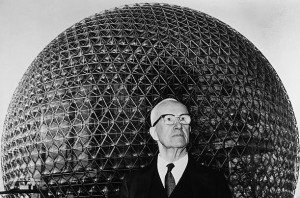 Beginning in 1960, Buckminster (called “Bucky” by his friends) and his wife Anne began residing in Carbondale, Illinois, where Fuller taught classes in design at Southern Illinois University of Carbondale (SIUC).

Of course, once the couple arrived in southern Illinois, they needed a place to live. So, at 407 South Forest Avenue (map), Bucky built his dome home.

Though most homes require months of construction before they become inhabitable, the dome was erected, on site, by the Parrish Construction Company, in only seven hours.

The installation took place on April 19, 1960. Fuller, and many of his students, were on site throughout the day’s build.

Affectionately known among the locals as the “Bucky Dome,” the dome home spans 39 feet and one inch wide (or across) and rises 16 feet, 6 inches high. Originally, the home was colored blue and white.

A fan of sailing, it is speculated that Bucky’s original color choice for the house was meant to suggest a sail boat on the ocean.

In keeping with the basic geodesic design, the roof of the home is a series of triangles, interlocked and forming a dome.

The structure has only five vertical surfaces–a series of plywood panels arranged around each of the home’s “sides” which each holds either a patio screen door (which grants the house a variety of entrances as well as loads of natural light) or two rectangle window panes, one above the other.

Of course, in a circular home there could be much debate about what constitutes the “front” door but on this dome home’s most east-facing portion is a single-sided entrance that is usually acknowledged as the “main” entryway.

A rather vintage and common-looking aluminum screen door (the only “swinging” exterior door in the house) also designates it as such. 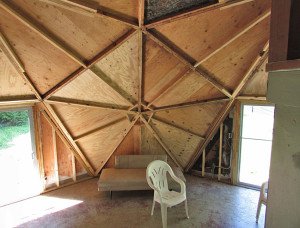 Once inside the very small foyer, the visitor is immediately faced with a directional choice of left, right or forward.

Choosing left takes you into the home’s main living space, its living room which constitutes about half of the home’s circle. The large patio doors as well as the structures overhead (recently restored) skylights make the space quite well-lit.

Despite the relative smallness of the house—it’s just a one-bedroom home–there is nothing cramped about it. In fact, thanks to the high ceilings and the “open” floor plan of the entire space, the house actually feels quite spacious.

More or less at the center point of home is a staircase. It is the entry to Bucky’s second floor study, a highlight of which is the specially-built curved bookcase that runs along the home’s back wall.

The upstairs study not only maximizes the dome’s upper space but creates a hidden space underneath it to contain, behind sliding wood closet doors accessible from the first floor, all of the home’s necessary machinery (its boiler, water heater, etc.).

Back on the house’s main floor, the living room flows seamlessly into the dining room and around to the kitchen.

While the kitchen’s single wall of sink, wood cabinets and major appliances look quite retro (if in a cool and hipster kind of way), the Fuller’s choice of an Eames table and chairs (visible in vintage photos) continues the home’s overwhelming modernist vibe.

Further around the circumference of the home, through a hanging door that folds accordion-like into the wall (another Fuller trait), one enters into the home’s bedroom.

It contains two serviceable, if very unromantic, single beds. At the back of the bedroom, between the two beds, is access to the home’s master bathroom. There is also within that room a small closet.

Exiting the bedroom, at the opposite end from where one enters, takes one through a (very small) vestibule/storage area where build-in shelves (try to) make the most of this existing space.

Then, following the home’s normal, circular flow, one arrives back to the entry hall, back to where they started. There is also a door located there that leads into the home’s second bath, a guest/half bathroom.

A unique feature that Fuller drew into the original house also allows this second bath to be accessible from the bedroom which originally granted him and Anne his and her water closets.

Do More With Less

Though one assumes that living in such a minimalist setting could be aggravating from time to time, there remains something exceedingly calming, even aggressively Asian, about the “life in the round” that this home suggests. 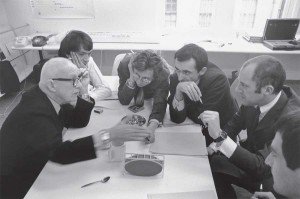 Fuller’s teaching agreement with SIUC called for him to teach on-site for only two months a year. The remainder of his time was spent on far-reaching travels and a very busy worldwide lecturing schedule. Hence, there is some debate about how much actual time, how many actual nights, Fuller actually spent living and sleeping in the dome home.

But his wife, Anne, usually remained behind and, therefore, in the residence. An oft-reprinted photo of Anne carrying in bags of groceries from her car into the house shows that, to her at least, this house was just home. 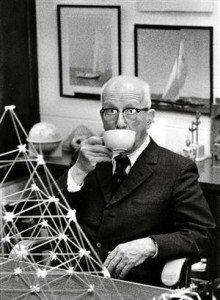 [ Did you know? Bucky Fuller patented the dome home in 1954 as “a solution to humanity’s need for safe, affordable and accessible housing.” ]

Not every part of dome living however was easy. Ceiling water leaks were common within the dome. Eventually, the Fullers had old-fashioned brown shingles installed on top of the dome. The covered roof may have lessened the visual impact of the home but it did alleviate the leakage—at least for a time.

The Fullers moved out of the dome in 1971 when Bucky accepted a teaching position elsewhere. Fuller died in 1983. Anne died only hours after her husband.

As for the dome home, for the next 30 years the home was rented out, mainly to students who were coming to study at SIUC. Almost every year, throughout the 1980s, in the “For Rent” classified section of the local newspaper, one could find listings like this sample: 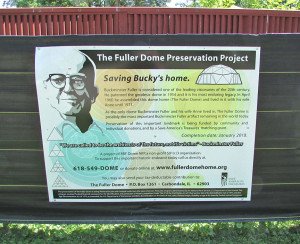 Finally, in 2001, Bill Perk, a now retired SIUC professor, purchased the home and donated it to a specially-formed non-profit that was organized with the specific mission to restore the dome it to its original “Bucky” era state.

The preservation has not been an easy undertaking. Numerous issues, some of them unique to a dome dwelling and some of them simply the norm for any 54-year old structure, have plagued the efforts.

Furthermore, in order to bring the dome back to how it was in Bucky’s day, the group has to undo many latter-day (and often ill-advised) “enhancements” and repairs.

Around 2002 or ’03, after the home moved into the hands of the NFP, and prior to plans being drawn up and money raised for its rehabilitation, a second dome, this one made of steel, was constructed and placed over the entire existing original home in order to protect the original structure from the elements and enable workers to conduct work on the exterior of the home.

This fabric-covered secondary shield (pictured above) has only recently been removed.

With this temporary safe-guard in place, the group could not take on its first task: assessing the basic structure of the home. Over time, some of the dome structure had become “sprung,” bowed by the elements and a history of poor repairs.

For a number of years, a wood pillar had to be installed inside to brace the dome’s internal frame. Thankfully, with the exterior preservation work now completed, this problem has since been resolved.

Over the years, many production companies, architectural firms and even DIY-type TV shows have offered to take on the Bucky Dome project. Unfortunately, these outside entities often have an eye more for a speedy rehab than for historical accuracy. Hence, progress has, at times, been slow.

Today, though, after a decade of toil, fundraising and planning, Phase One of the restoration has been lovingly completed and the exterior of the Bucky Dome now matches what it originally looked like.

The home’s roof has also been carefully “upgraded” to withstand the cold Illinois winters and, unlike in Bucky’s day, not drip internally.

As the exterior of the home has now been returned to its original state, the NFP is now free to concentrate on its next phase, the restoration of its interiors. Team members hope not only to repaint the walls and the like their original color, etc., but also to repair, replace or replicate as many of the original furniture and furnishings as well.

In keeping with the home’s basic aesthetic, the original Bucky-era interior was minimal and eclectic, much of it decorated with items gifted to Buckminster Fuller during some of his world travels.

Most of these items have long ago been lost or sold but the team is determined to find (or build) replacements as close to the originals as possible. Via modern photographic techniques, the team even hopes to zoom in on some of the titles on Bucky’s upstairs bookshelf and refill that space with copies of these titles.

Some refurbishing will take a little guesswork and a little faith. For example, the large wall-mounted mirrors affixed above the tub in the bathroom might have been added by a later tenant of the home. But since there’s no way to prove they weren’t installed under the Fuller’s tenure, the mirrors will remain in place until it’s proven otherwise.

The group hopes that the concurrently running Phase Two and Phase Three (Three will focus on the concrete, sidewalk, privacy fence and landscaping around the home) will be completed within the next two to three years.

Once the restoration if finished, it is also the hope of the RBF Dome NFP to turn the home into a museum and center for study by Fuller scholars. A newly-created group, Friends of the Dome, has been christened in order to provide and raise money for the home’s annual upcoming, estimated at about $8,000 a year.

In 2003, the home was recognized by the city of Carbondale as a historic landmark. In 2006, it was added to the National Register of Historic Places.