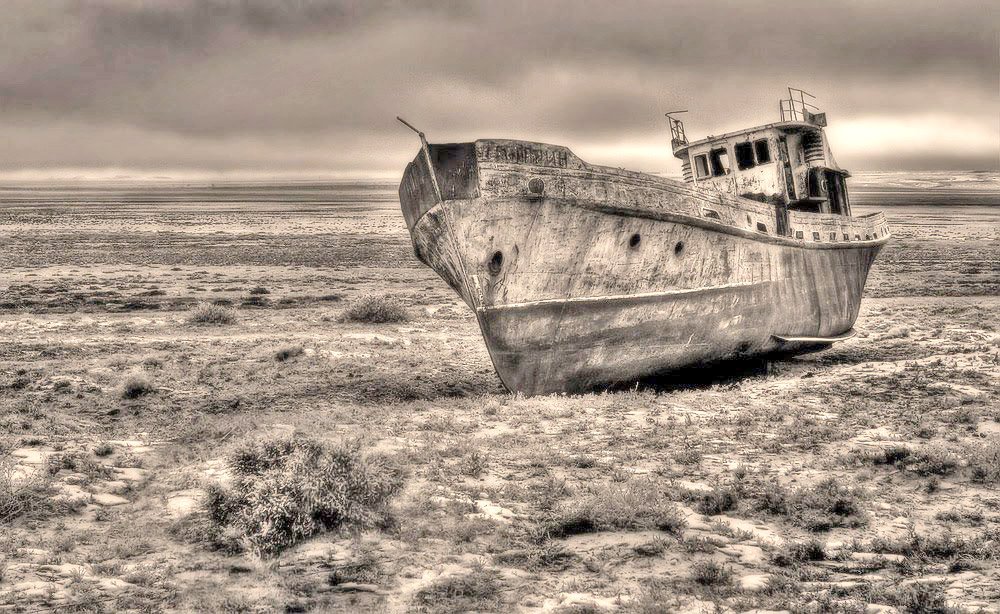 Over one hundred ships are mysteriously abandoned in this desert in central Asia. You rub your eyes, but it’s not an optical illusion; no water as far as the eye can see. This desert is like any other, aside from the empty landlocked fishing ports, rusted ships frozen in sand, and former island with abandoned biological weapon facility.

Actually, fifty years ago this “desert” wasn’t a desert at all. It was the fourth-largest lake in the world and supported a fishing industry that produced 50,000 tons of catch and fed over 100,000 people across nine countries. But after five decades of abuse, the ecosystem collapsed and the water retreated. Entire cities watched their economies vanish as the ships ran aground. Then the residents fled.

Today the Aral Sea has lost 85% of its volume. In its place: A toxic and unforgiving new desert.

In part one of a two-part series, we travel to the Aral Sea, a landlocked body of water which straddles the Central Asian countries of Kazakhstan and Uzbekistan: 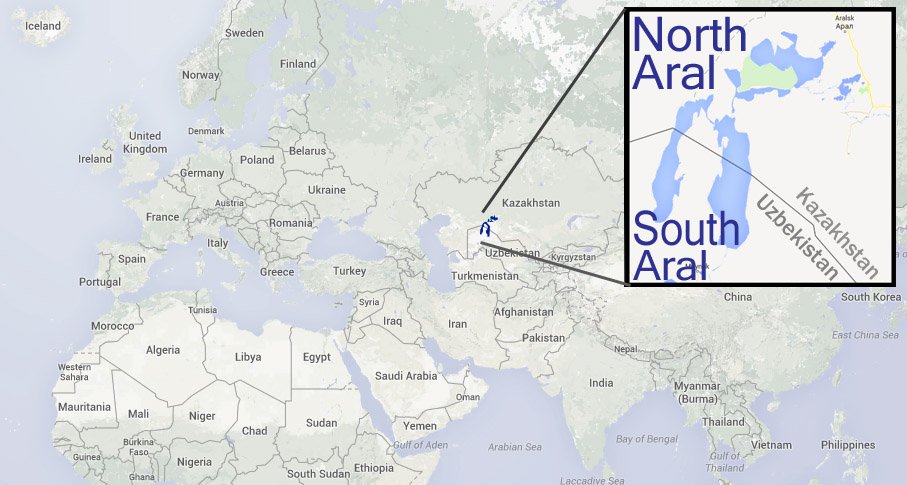 The Aral Sea is a five and a half million year-old closed-drainage basin system (known as an endorheic basin), meaning it contains no natural outflows to other bodies of water.

Its name signifies a “sea of islands,” a reference to the fifteen hundred islets that once dotted the Aral’s surface. This changed in the 1960s when the Soviet government’s diversions of the Amu-Darya and Syr-Darya rivers sapped the sea of its inflows.

The plans were to dig irrigation canals from Uzbekistan through Turkmenistan, fed by the Amu Darya and Syr Darya Rivers, to sustain large-scale agriculture in the desert. Motivating factors were greed and survival; the former driven by cotton prices, the latter borne out of famine and a starving population.

The winners were the farmers, who would go on to become worldwide leaders in cotton production (aka “white gold”). By 1988 Uzbekistan had become the world’s largest exporter of the fluffy fiber. The losers were the existing natural ecosystems supporting thousands of animals and fish, and a regional sea-based economy that supported over 100,000 people across two countries. 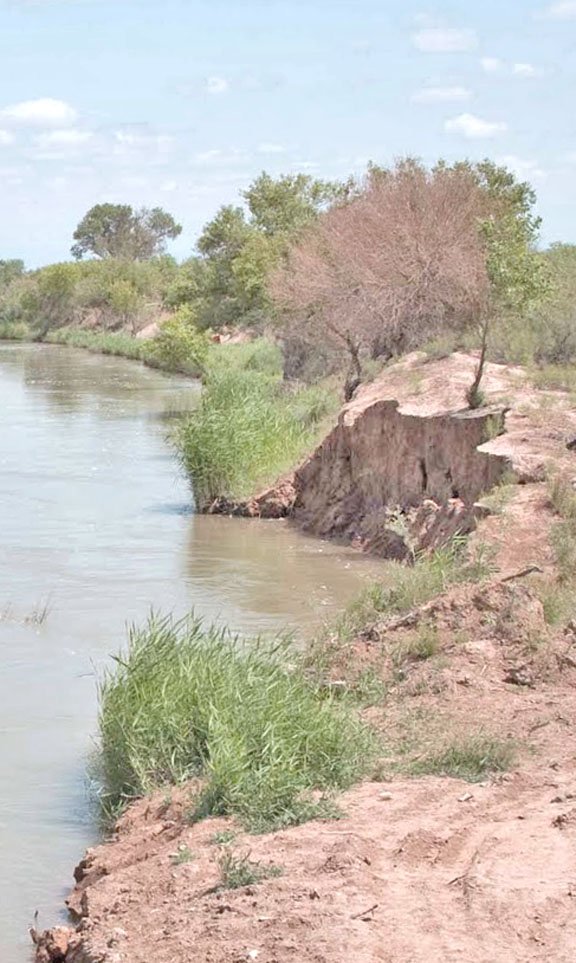 Over a span of fifty years two major canals were constructed: The Main Turkmen Canal and the Karakum (Qaraqum) Canal (pictured at right).

The Main Turkmen project began in the late 1930s and concluded in 1953 with the death of Joseph Stalin. It initially diverted approximately 25% of the Amu Darya’s waters southwest to the Caspian coastal city of Krasnovodsk – however this amount increased as farming expanded across the Karakum.

Over 20,000 miles of canals, 45 dams, and 80 reservoirs fed new fields of cotton and wheat across the steppe. But the system was leaky and inefficient, and after several decades the Amu Darya had lost enough flow it no longer reached the Aral Sea. Today the Amu Darya ends over 100 miles (161 km) away, just South of the Porlatau settlement. (map)

The Karakum Canal is one of the largest in the world, stretching 854 miles (1,375 km) long. It took workers over thirty years to build (from 1954 until 1988), and begins farther south, running across the Karakum Desert.

As the canal projects progressed, more water was diverted.

In 1960 the rate of water being diverted reached between 4.8 and 14.4 cubic miles (20 and 60 km3) per year, the threshold at which net outflows eclipsed net inflows.

For the first time in its history, the Aral Sea began to shrink.

Desiccation of the Aral Sea 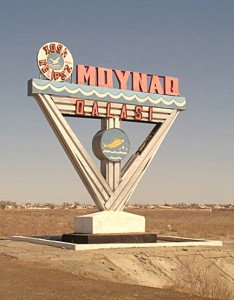 As the water level fell, the salinity and toxicity increased. After two decades the lake had fallen over 52 feet (16 m), and shorelines receded between 30 and 60 miles (48-96 km).

Several hundred year-old fishing economies (such as Mo’ynoq – see below) were now stranded in a new and infertile desert, miles away from water. With the departure of the water, residents lost more than their livelihood.

Countless hulking oxidized ships now rot in banks of sand. Looters and scavengers relieved the vessels of anything with value long before they were left to rot.

The ships still faithfully serve the people of the desert steppe, even in decay. However instead of transporting fish and materials, now they offer shelter as overnight camps for nomadic scavengers and regional tradesmen on caravan routes. 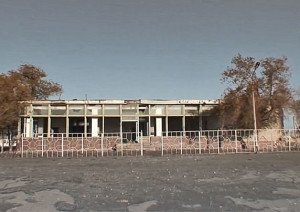 CASE STUDY: Mo’ynoq (Muynak/Moynaq/Muinak/Muinok/Мўйноқ/Муйнак) is a (mostly) deserted city along the former southern coast of the Aral Sea.

It once boasted a population of 15,000, its industry almost entirely driven by fishing of the South Aral Sea. Receding waters destroyed the town’s economy and population, leaving Mo’ynoq dilapidated and vacant.

The town’s airport (UTNM) once exported the town’s fish and served hundreds of passengers a week, but it closed after the cannery closed and the last air travelers purchased one-way tickets. (above right, map)

The Mo’ynoq Cannery (below, map) was built in 1933 and was once one of the U.S.S.R.’s major canneries employing over 1,000. In 1958 it produced 21.5 million cans of food, distributed throughout the Soviet Union. By the late 1970s the fish processing part of the plant stopped functioning.

Today it stands empty; no water, no fish. 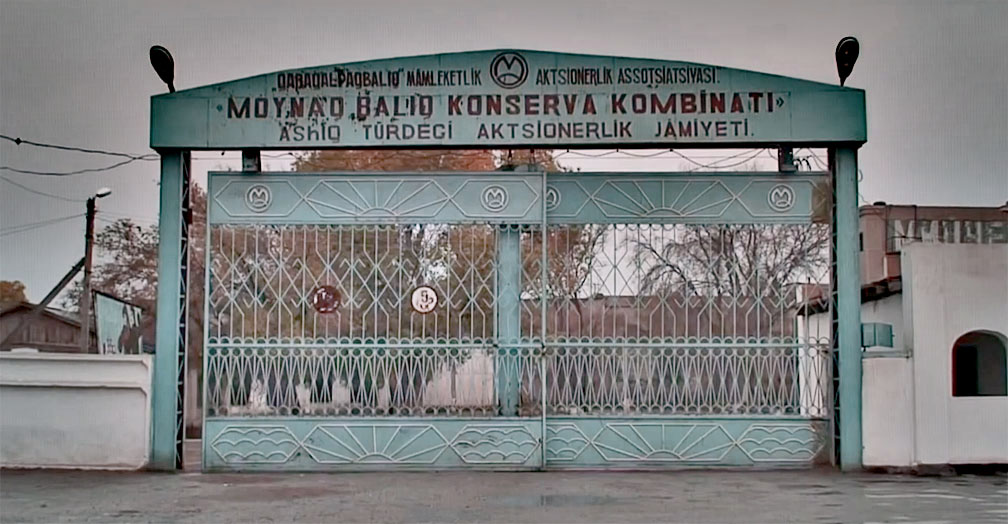 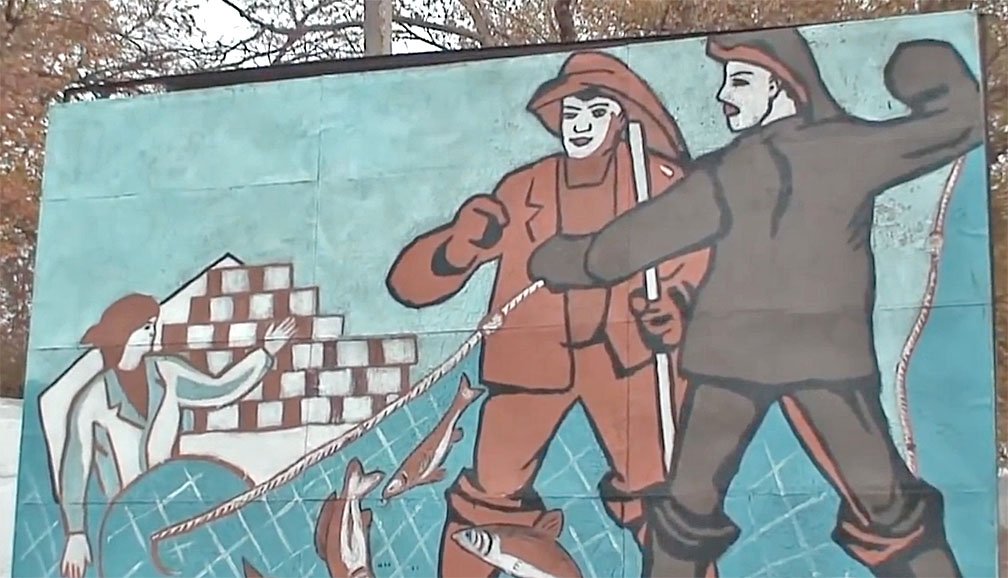 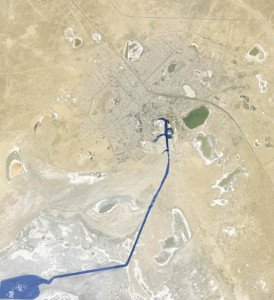 When Aral harbors lost their coastlines, residents scrambled to keep their economies afloat.

The first solution was to dig canals from the towns’ harbors to the sea, an enormous project for area settlements and their limited sources.

[ At right: Aerial photo of Aralsk shows this canal (highlighted in blue) reaching southwest toward the retreating waters of the North Aral. (view on map) ]

The process was expensive and labor intensive, but it extended the lifespan of Aral-based industry. Unfortunately, it only delayed the inevitable for a few years. The rate at which the water retreated grew too fast and workers couldn’t dig the canals fast enough.

Eventually, they waived the white flag and abandoned the canal extension project.

[ Map exploration: Remains of abandoned canal extension. And another. We can keep going. ]

The result has been called by some as one of the planet’s “worst environmental disasters.” Without the presence of the sea, nothing moderates the weather or buffers the former coastal towns from the elements.

Climate change has left the region with hotter summers and colder winters. Wind storms kick up fouled dust from the former seabed, now tainted with chemicals and pesticides from agricultural runoff. Strong winds move poisonous dust clouds across the former ports, giving the few residents who stayed behind acute and chronic illnesses.

An entire fishing industry was forced to find other employment and sources of food, but with no industry, a lack of water, and polluted soil – farming is not an option. 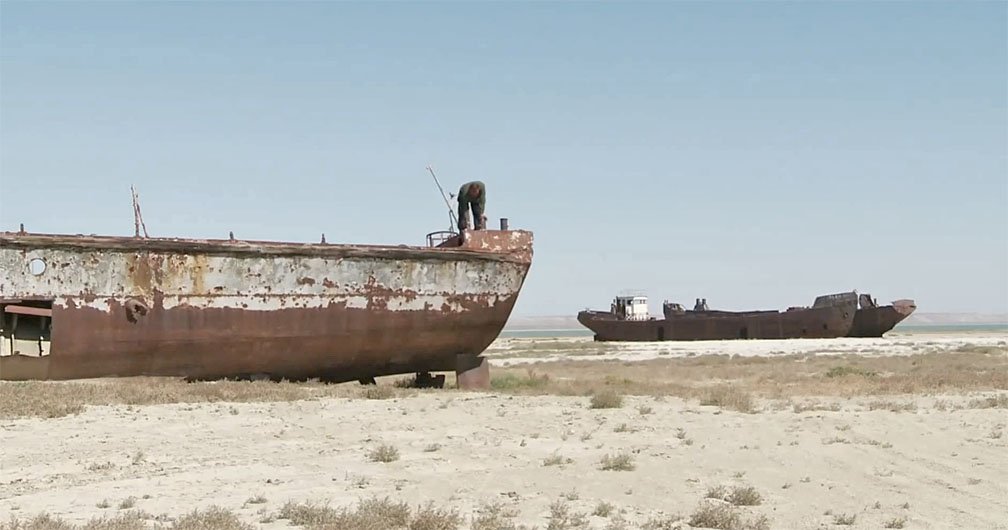 [ Map exploration: See ships stranded in what used to be the Aral Sea.

They are all over the place. Seriously. ]

By 1987 the water level of the Aral had fallen enough to split the sea into two bodies of water: The North Aral Sea and the larger South Aral Sea. 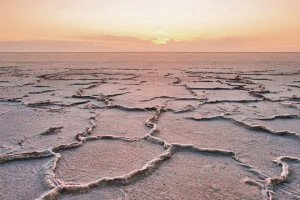 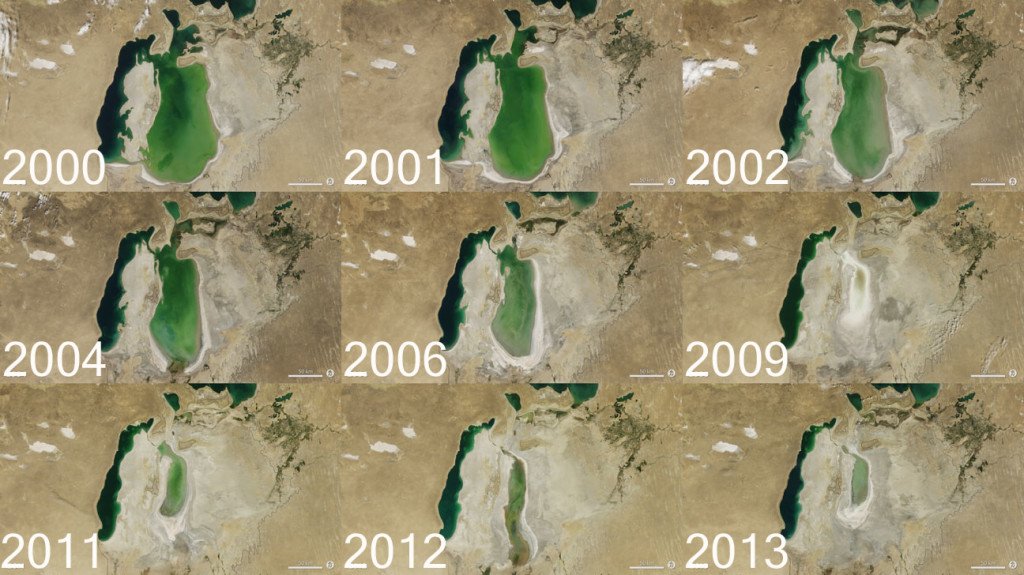 In March of 2000 UNESCO presented “Water-Related Vision for the Aral Sea Basin for the Year 2025” at the second World Water Forum, but the document was unrealistic in its goals and failed to consider the effects on the Uzbek people.

The southeastern basin was the first to dry up in 2009, while the southwestern basin retreated to a narrow strip along the far west former coastline of the Aral Sea. 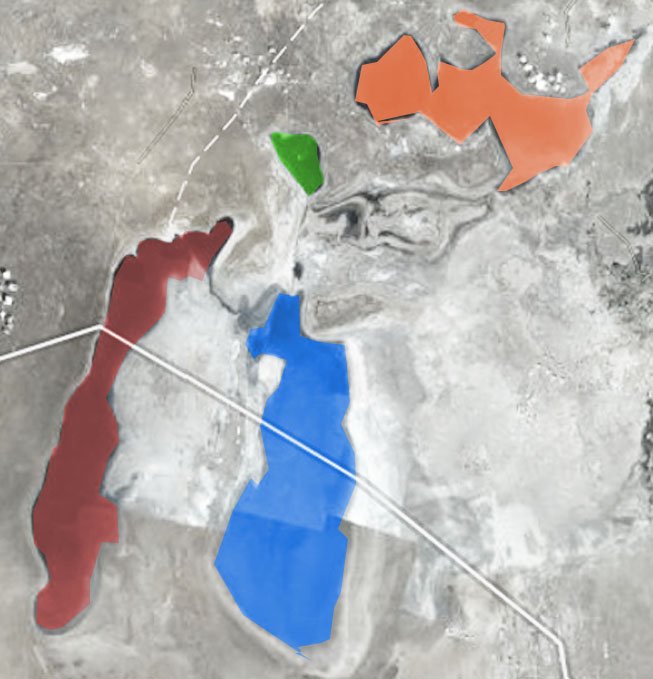 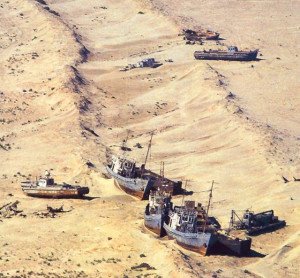 The disappearance of the Aral Sea was a surprise to most but the Soviet Union. Not only was the U.S.S.R. aware of the potential problems early – it encouraged a culture of stifling those who dare contradict existing plans.

In 1964 an engineer who had worked on the canal program acknowledged the lake’s fate was no secret to those involved in its construction:

“It was part of the five-year plans, approved by the council of ministers and the Politburo. Nobody on a lower level would dare say a word contradicting those plans, even if it was the fate of the Aral Sea.”

Publicly the Soviet Union fostered a different attitude toward the crisis, with some Russian experts considering the drying of the Aral Sea to be “nature’s error.” As one engineer declared in 1968:

“it is obvious to everyone that the evaporation of the Aral Sea is inevitable.”

[ Satellite images taken by NASA in August 2014 have revealed that for the first time ever, the eastern basin of the South Aral Sea had completely dried out. ] 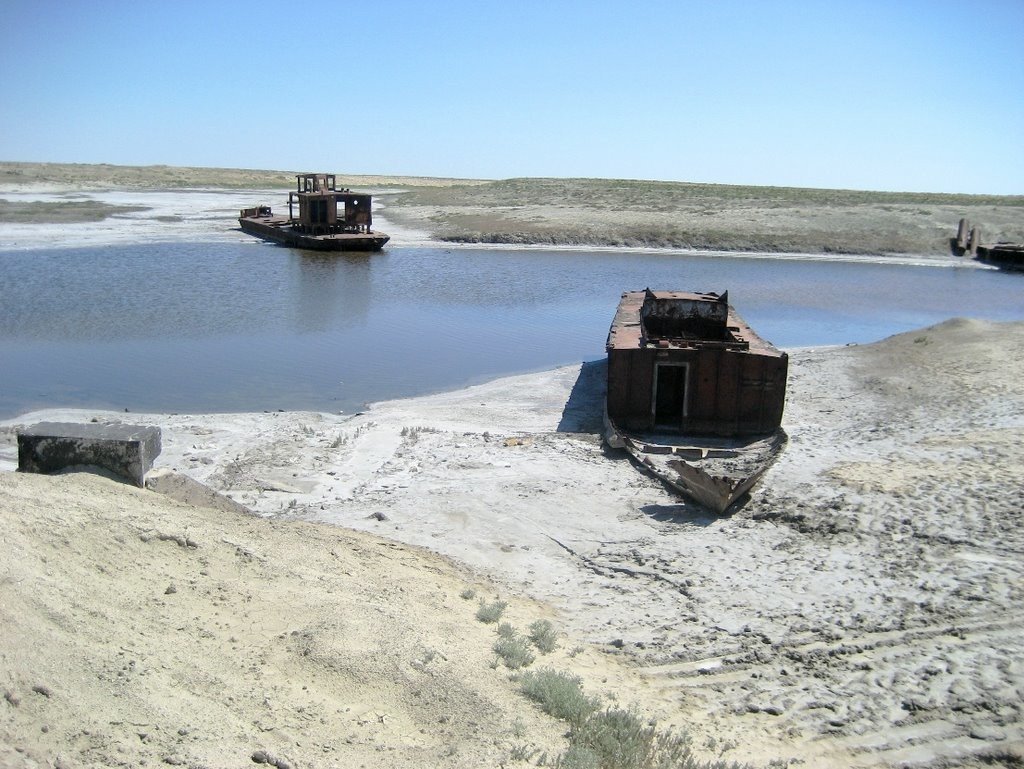 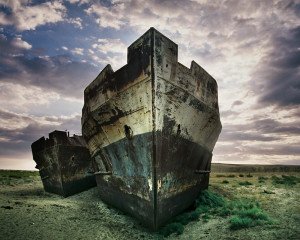 Over the years various attempts have been made to slow the desertification of the Aral Sea. In the 1960s the Northern River Reversal was a large-scale engineering effort carried out to redirect northern river flows inland.

Skyrocketing costs and increasingly negative public sentiment toward the plan eventually forced authorities to cancel the project, which was abandoned in 1986.

Other solutions such as improving the quality of the irrigation canals, the installation of desalination plants, and installing additional dams have been considered. Proposals not well-received included the charging of farmers for use of river water and the compulsory order of switching to less thirsty crops.

When Uzbekistan gained independence from the Soviet Union in 1991, it formally assumed authority and responsibility for the southern half of the former Aral Sea.

Within months the Interstate Commission for Water Coordination of Central Asia (ICWC) was formed (at left), and on February 18th, 1992, five countries united in an attempt to solve the economic and environmental problems surrounding the Aral Sea. Those involved: Kazakhstan, Kyrgyzstan, Tajikistan, Turkmenistan, and Uzbekistan.

On March 23rd, 1993 the International Fund for Saving the Aral Sea (IFAS) was launched to raise funds for projects under the Aral Sea Basin Program banner. To this end, in January of 1994 the five countries each pledged to direct one percent of their annual budgets toward Aral Sea recovery programs. Unfortunately the riparian countries did not make the pledged contributions, and the project had to be scaled back.

From 1997 to 2005, the World Bank helped build the North Aral Sea Project, an ambitious Aral restoration effort which included the 8 mile-long (12.9 km) Kok-Aral Dam across the Berg Strait. (pictured above)

Also known as the Dike Kokaral, the dam allowed for the re-accumulation of water into the North Aral Sea and helped to restore the regional ecosystems. The first phase was completed in 2008, and before long there were tangible results showing the reversals of negative trends.

By 2010 the North Aral Sea Project restoration efforts paid off; the water level not only stopped declining, it had begun to rise. The following year witnessed a decrease in North Aral salinity for the first time in decades, and the water level rose by two meters.

Fish returned in significant numbers, and the corollary micro-climate changes brought the long-absent rain clouds back to parts of the region. The same could not be said for the South Aral, long gone and now a rusting ship graveyard. 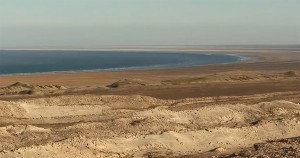 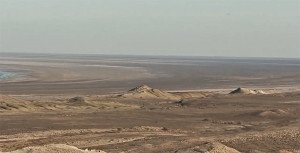 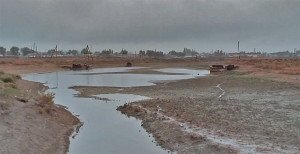 And what of the island with biological weapon testing facility? Click here for Part II of the Aral Sea feature. 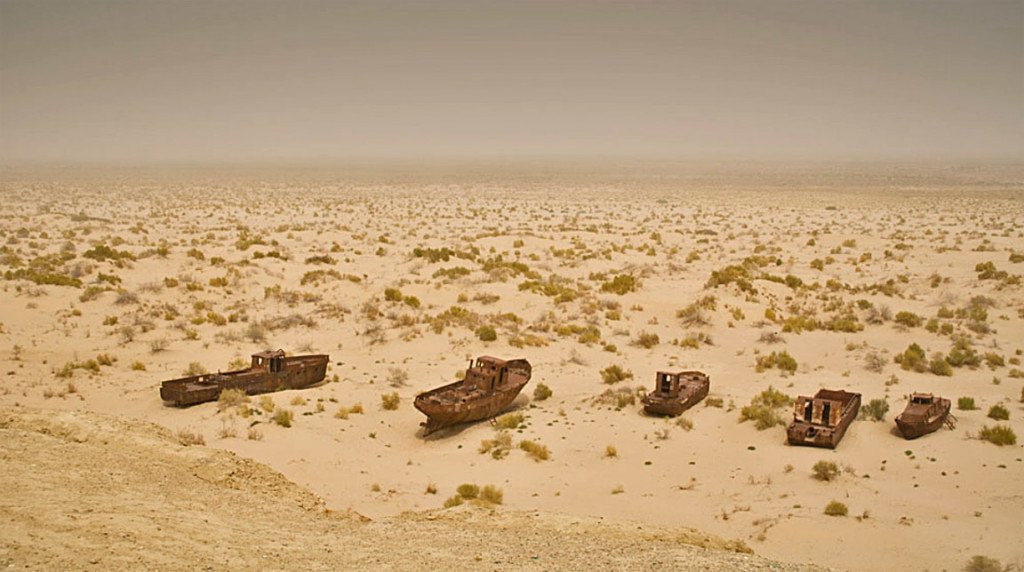 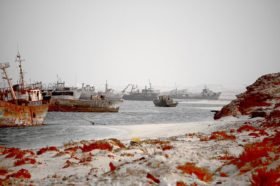