Fifty miles north of Atlanta, a 34-acre compound houses one of the largest car collections in the world. But this collection doesn’t have polished Ferraris or Porsches under shining lights. There are no immaculate Mercedes or Bentleys proudly displayed behind velvet ropes. A rusty sign out front of the site reads “The world’s oldest junkyard jungle, here 80 years.”

Most of this collection is unsalvageable midcentury American steel, and it lays strewn about a forested property in rural Georgia. Over 4,500 cars – most of which are model year 1972 or older – belong to a man who spent his life saving some of America’s classic cars from the crusher. Sometimes-Interesting teams up with a fellow blogger to explore the what and why behind Old Car City U.S.A. 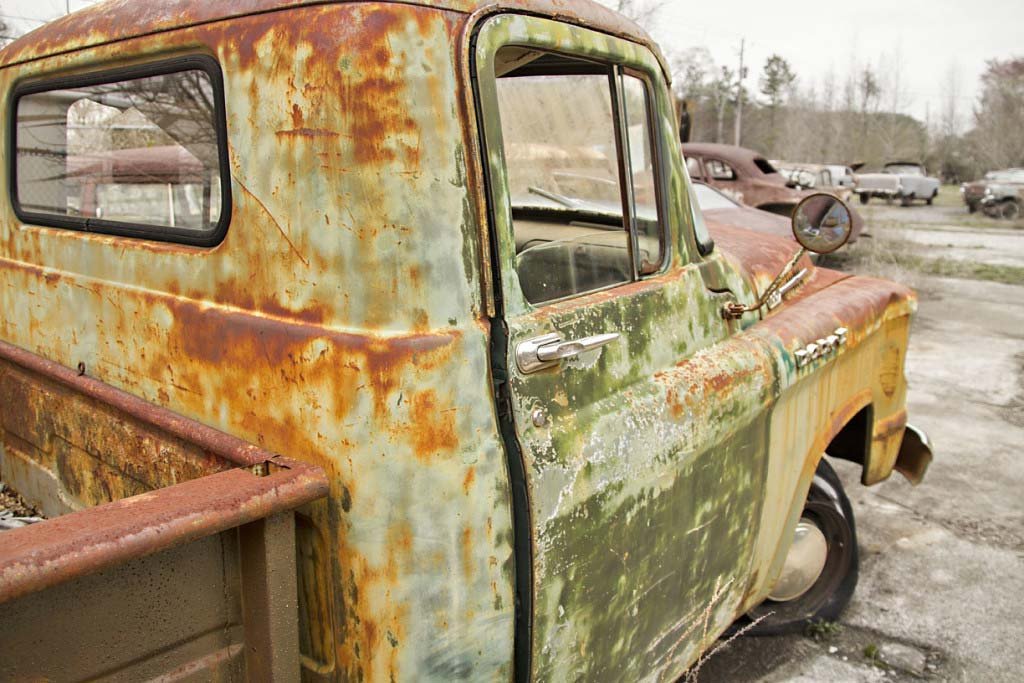 [ Note: This site is not affiliated with Old Car U.S.A. ]

Old Car City began in 1931 as a general store, opened by the family of current owner Dean Lewis. Dean’s parents ran the store in the town of White, Georgia, and sold various items ranging from clothing to car parts, tires, and gasoline.

When the United States entered World War II, resources such as steel and tires became scarce as they were directed toward the war effort.

The Lewis family smartly followed the money and shifted the business into scrapping cars; by the late 1940s the general store had morphed into an auto salvage yard.

But Dean had a different vision for the business; rather than profit off the destruction of cars he wanted to preserve their legacies. 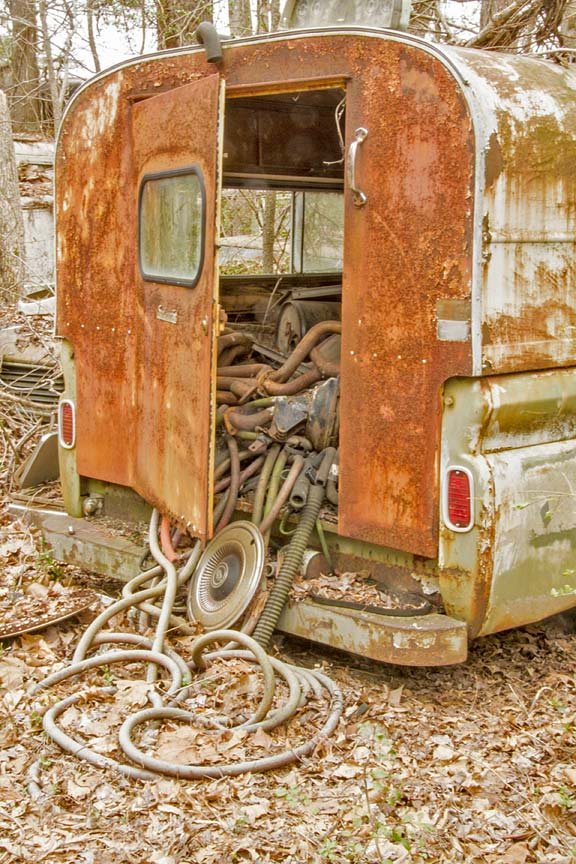 Dean would eventually acquire the family business in 1970 and spent the next several decades acquiring various junked and wrecked vehicles without the intent to scrap them.

“When I got older and made some money, I got a loan and bought all these cars and it became Old Car City.”

It was a bold move and possibly disastrous business decision, but Dean is not normal – and he is proud of it.

“What I’ve always done is try to do things that other people don’t do because if you do everything everyone else does, you’re going to be normal.”

I want to be more than normal.

The contrarian’s passion for cars helped grow the collection to what it is today.

His favorite car is a 1944 coupe. Lewis also likes Lincolns and admits he may have more of those than any other make.

Inside the main office are the nicer and rarer vehicles, including one of Mr. Lewis’ favorite: The last car Elvis purchased, a 1977 Lincoln Mark V.

Collectible oddities and other Americana help create the vintage atmosphere inside. Upstairs is Dean’s art museum, mostly comprised of Styrofoam cups. Lewis decorates them after his morning coffee, and has been doing this for the last 30 years.

Antique toys, bicycles, school buses, and tractors have become staples of the Old Car City as well. A Cartersville Grand Theater marquis sits in the yard. 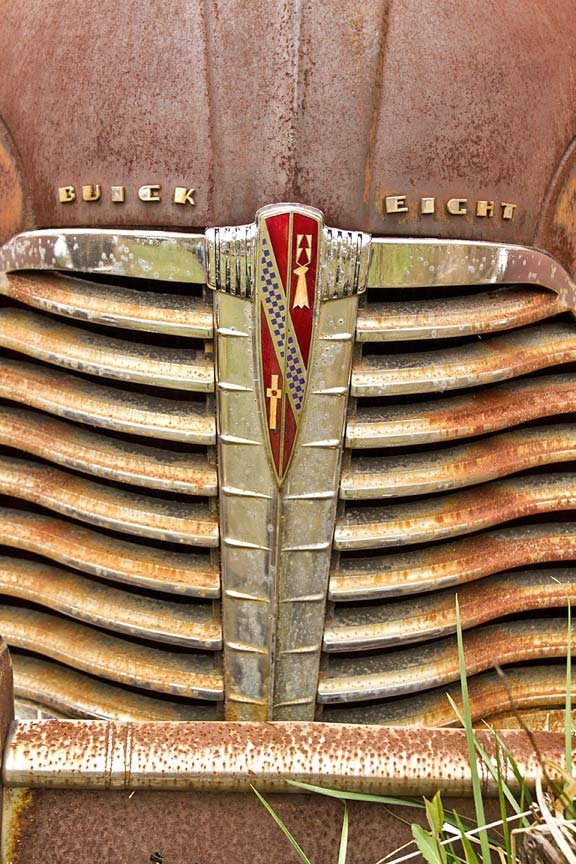 Old Car City bills itself as the “world’s largest old car junkyard,” so how many cars are on the property? Dean says he stopped counting after 4,000. One thing he knows: There are more cars in Old Car City than people in White, Georgia.

Three separate lots contain the cars, scattered across 34 acres. Behind the main building are 6.5 miles of groomed walking trails; it’s not difficult to get lost.

Every vehicle has its own story, many discernable by the condition of the car. One Chevy pickup was clearly in a rollover. Next to some bushes sits what looks like a T-boned Plymouth Valiant. It never had a chance.

Light dances across broken windows as spider webs glisten in the morning dew. The oldest vehicles have been reclaimed by nature, completely buried in foliage unmolested for sixty years. Some cars are stacked on top of one another, exactly as they were delivered decades earlier.

Not Much of a Scrapyard 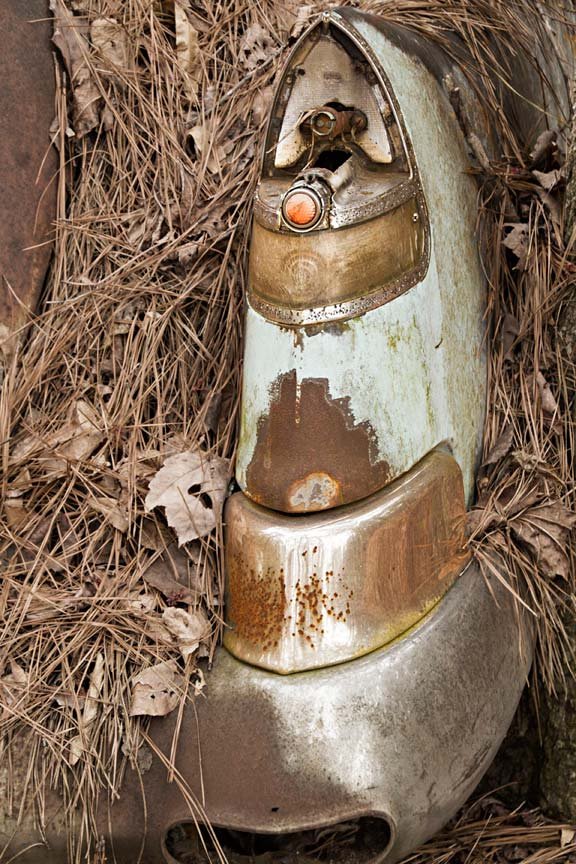 Mr. Lewis sees his collection as a combination of art, nature, and history.

He will tell those who ask most everything is for sale, but be prepared to pay to remove one of the exhibits as the prized collection has a nostalgic value to Dean.

Those looking for parts or projects have returned empty handed, saying “most of the stuff you can fix is too high priced” and “they really don’t want to sell anything.”

Patrons usually don’t leave museums angry because they can’t buy the exhibits. Is the problem a failure by Mr. Lewis to set expectations?

Old Car City is more of a museum than a salvage yard, and Lewis acknowledges as much with his advertising; the website today refers to it as a photographer’s paradise.

I bought old cars when they weren’t worth nothing. I saved them, other people crushed them. 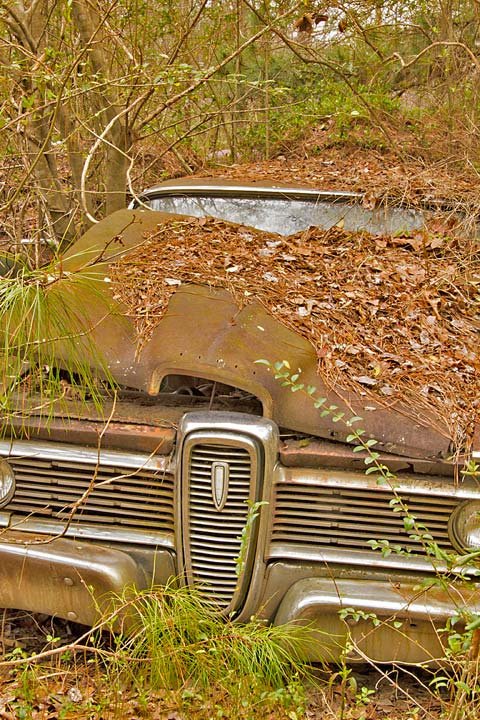 A recent re-design and re-opening billed the attraction as “Nature, Art, History, and Cars.”

The metamorphosis from salvage yard to museum has both antagonized the vehicle restoration community and pleased photographers and purists.

Admission prices vary; photographers can expect to pay more than visitors without cameras. Guests reported paying $10 several years ago. In September of 2013 a visitor reported the prices were $15 to look, $25 to take pictures. Today the website indicates the base entry fee as $25 without a camera.

Comments on review sites have recommended stopping at Wes-Man’s Restaurant across the street from Old Car City after a long day of walking the grounds. Southern food and vintage décor help complete the walk down memory lane. 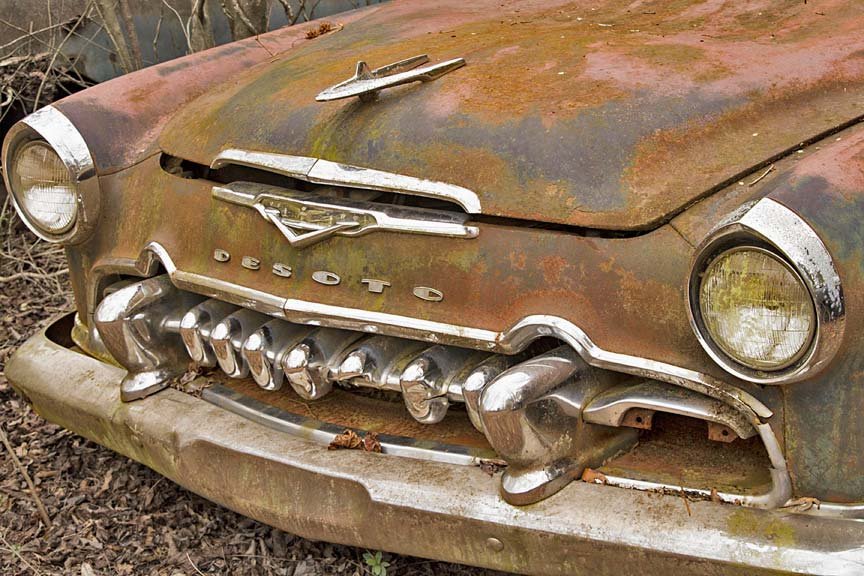 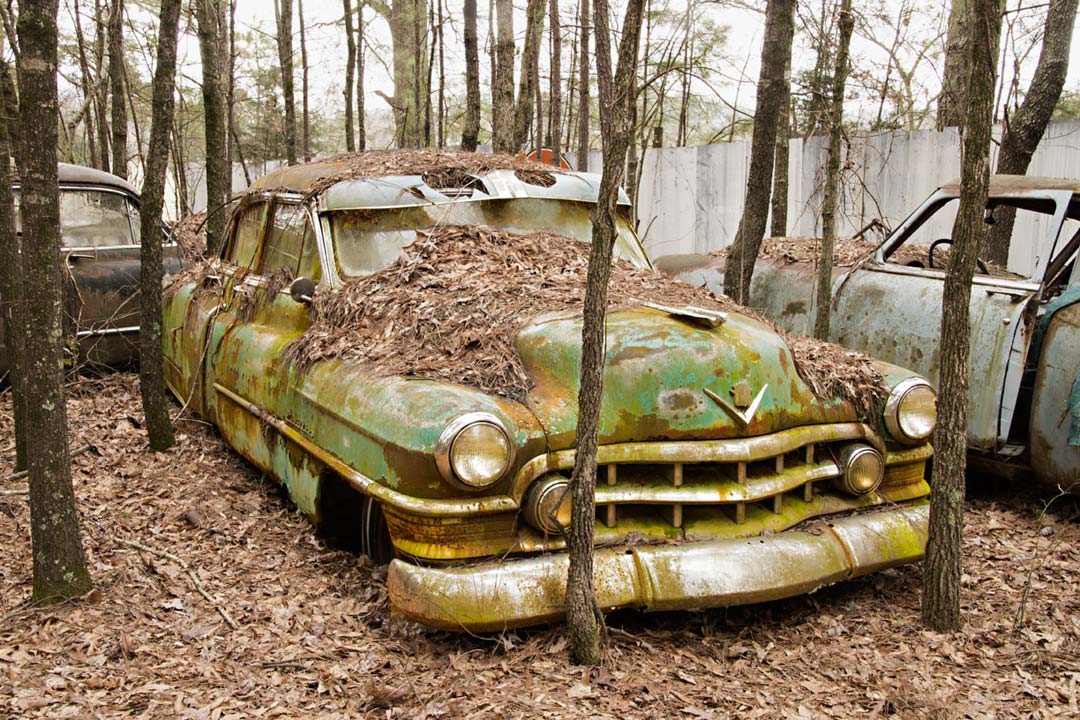 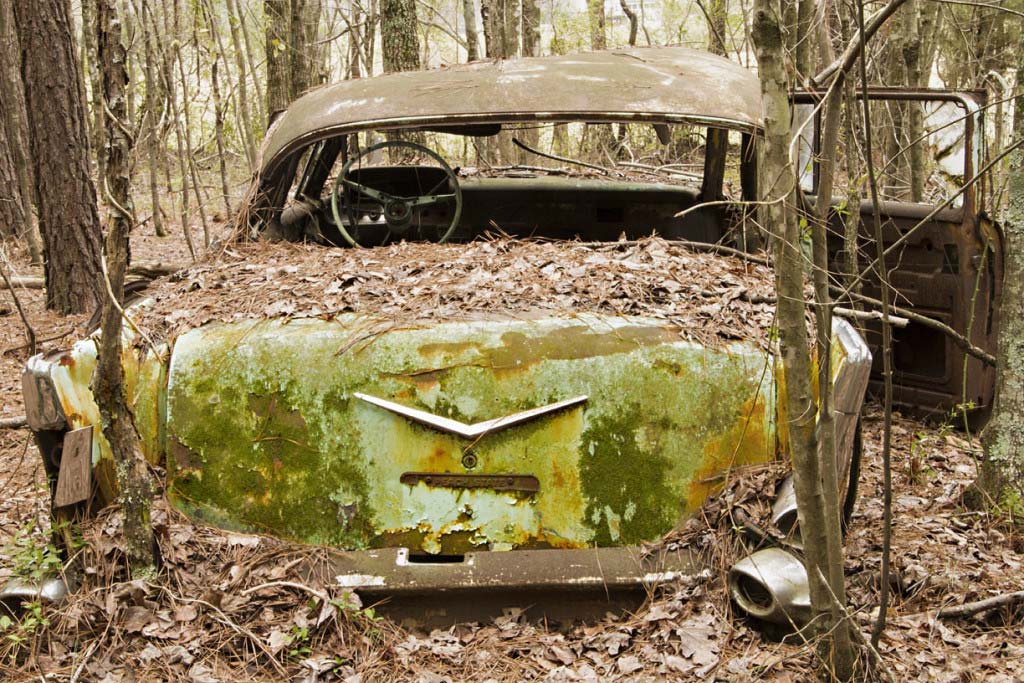 Note: Galen provided many great pictures of the “world’s largest old car junkyard,” kudos to his fantastic job capturing so many of the relics in Old Car City. Please visit his blog for additional information & photos.

THIS WEBSITE IS NOT AFFILIATED WITH OLD CAR CITY U.S.A.

[ Visit on Maps: Google and Bing ] 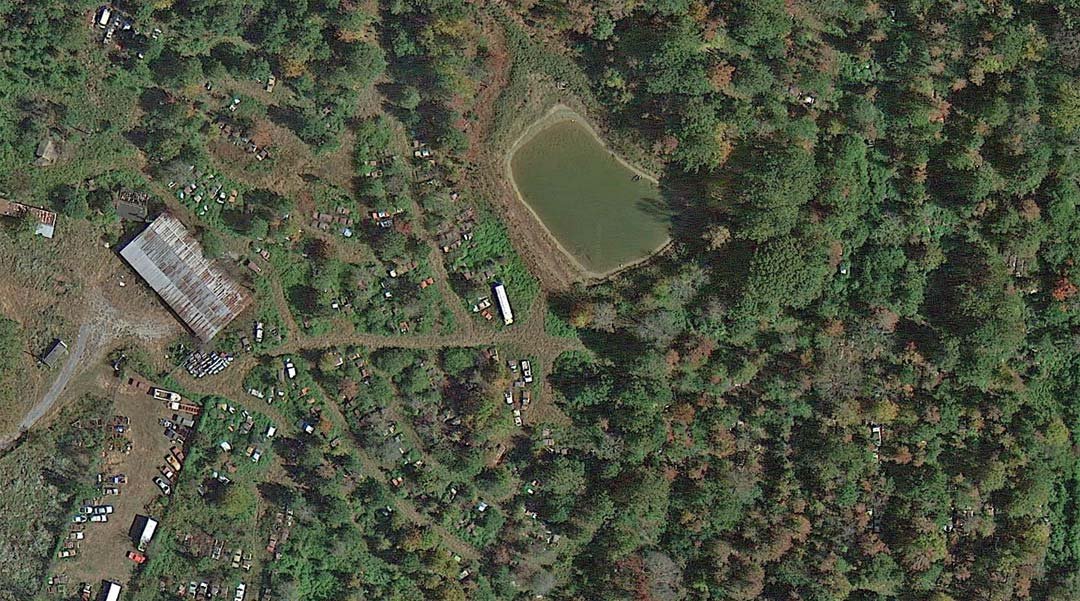 Want to see more old cars? Check out our article about the Willow Bridge Service Station.