The Afar Region of Africa, named for the people who call it home, encompasses Djibouti, Eritrea, and the northeast corner of Ethiopia. A notable trait of the Afar Triangle is the Danakil Depression, the lowest point in Africa.

The territory is one of the hottest on the planet, and features everything from earthquakes and volcanoes to geysers and salt canyons. It is also home to Dallol, a remote mining camp accessible by camel.

The now-abandoned town of Dallol was once a busy site, mining potash, sylvite, and salt during various times throughout its history. When U.S. mining companies were conducting geological surveys in the early 1960s, they recorded the hottest average temperature for an inhabited location on Earth. 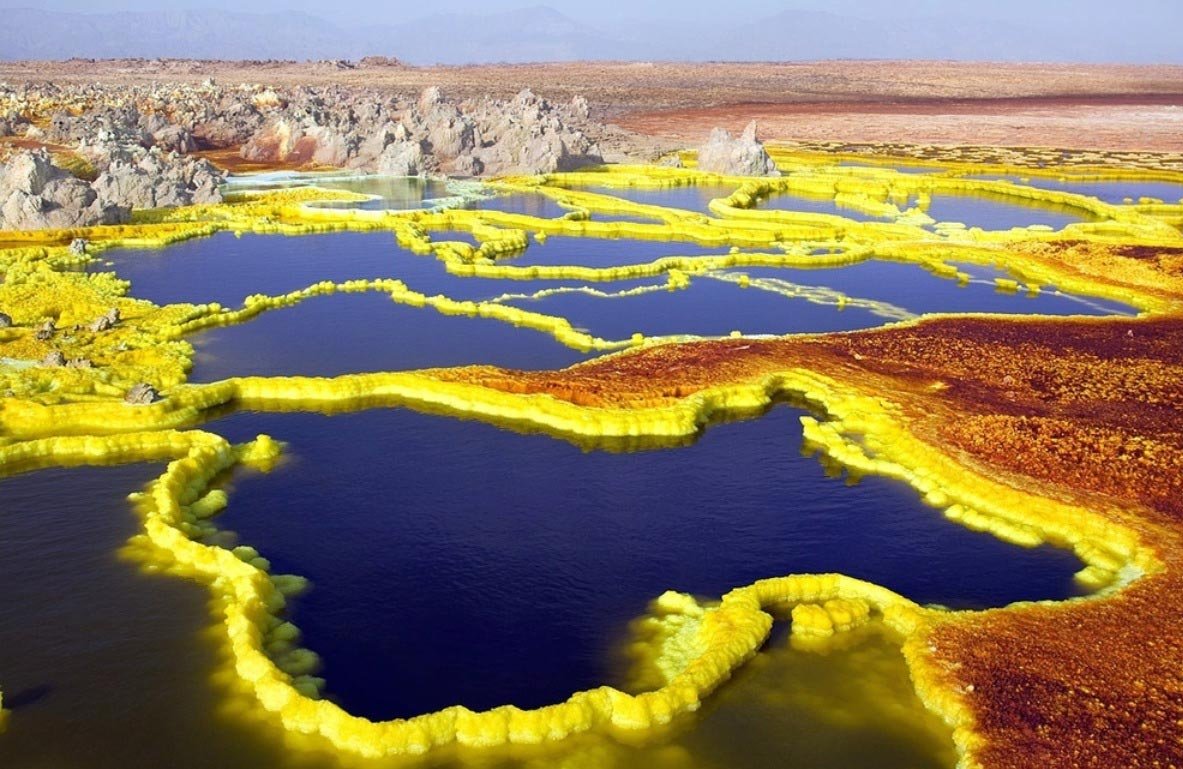 The town of Dallol was named for the volcanic explosion crater in the Danakil Depression. Part of the Erta Ale Range, the Dallol crater was formed when basaltic magma penetrated Miocene salt deposits.

The resulting hydrothermal activity created phreatic eruptions which formed the collapsed volcano. The Dallol crater is one of the lowest known volcanic vents in the world today, 150 feet (45m) below sea level.

The region sits along a fault line, not far from a tectonic triple junction to the south. As a result, the valley is often disturbed by tremors from the plate tectonics.

Between September and October of 2005, scientists recorded 163 earthquakes greater than 3.9 in magnitude effecting the area. Multiple volcanic eruptions accompanied the earthquakes while the resultant new fissures gargled molten lava.

The hot springs in Dallol boast bright colors, a palette of ferrous chloride and iron hydroxide emissions collecting in pools.

Just to the west of Dallol mountain are the salt canyons, boasting some of the most impressive features of the Danakil. Pillars of salt – a result from erosion – rise up to 130 feet (40m) high. The salt pillars vary in pinkish hues due to the shifting levels of halite and potassium salt deposits over time.

The trek to Dallol from any direction is long and arduous. The locals refer to the area as “the Gateway to Hell,” and it’s not hard to see why: There are no roads and the landscape of the Danakil Desert makes passage extremely difficult.

The journey by camel can take a full day from the nearest population center.

In the Danakil, the daylight is blinding. The mountains yield to an expansive white flats, seemingly endless in every direction. Press on far enough and a large brown mound protrudes in the distance, the base of the collapsed volcano blurring in the heat.

Upon approach, the beauty and danger seem to grow in concert. Thin crust covers pools of colorful acid, each taking turns bubbling to the surface through one of countless hot springs.

Geysers spit toxic gases while deposits of sulfur and iron oxide collect in miniature ponds the color of slime and Listerine. Mineral aggregations reach skyward, a result of the always-active fumaroles.

The dangers go beyond the brittle crust, acid pools, and sulfur spouts; there is also the threat of “fire wind,” what the natives call the sweltering sandstorms which feel like a tornado in an oven. Another threat are the Afar themselves, nomadic tribesmen known for their ferocity.

The Ethiopian government requires all visitors to the Danakil to hire armed guards, a rule easily understood after hearing the Afar were rumored to have castrated foreign visitors to their land in the early 20th century. It’s for good reason National Geographic credited this area as being one of the cruelest places on earth. 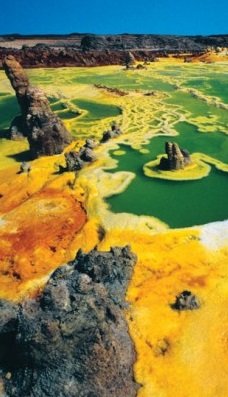 Dallol sits over 400 feet below sea level and averages less than 200 millimeters of rainfall per year. Not surprisingly it is also unbearably hot, with little fluctuation in temperature throughout the year.

During the early 1960s, an American mining company conducted a geological survey of the Danakil. It was in Dallol the team measured the record average temperature of 96° Fahrenheit (35°C). The daily high will frequently eclipse 115°F (46°C).

Here, the sun isn’t the only source of heat; the unique environment contributes to the calefaction. Conical vents act as natural exhausts of the earth’s gasses. Boiling acid bubbles to the surface through hot springs.

The heat comes from every direction, and it’s a kind of heat the human body isn’t built to handle – but man isn’t alone. Any trip to Dallol will also see the remains of small animals overcome by heat, starvation, or fumes.

Out here, even predators are scarce.

The Dallol area of the Danakil Desert is rich is potash, a key component of fertilizer. Potash is not particularly rare, but what makes Dallol unique is the salt deposits reach the earth’s surface, providing easier access with low-tech mining requirements.

When this discovery was made in 1906, an Italian company by the name of Compagnia Mineraria Coloniale (CMC) established the first mining operation in Dallol.

By April of 1918, the first railway between the new mining site and the Eritrean port of Mersa Fatma was completed. The remote location meant construction would be difficult as materials in the Danakil are scarce. Most of the structures were built from salt blocks, the only building material available.

Potash mining would continue in Dallol until after World War I, when overseas suppliers were able to undercut the Ethiopian salt in ease of availability and cost of extraction. In the following decades several attempts to re-open the salt mine were made, but none would last.

From 1925-1929 an Italian company ran a sylvite mine out of Dallol. After World War II the British removed most of the railroad, essentially turning the lights out on Dallol forever. Without a rail system to export the mined salt, no organized mining operation could be profitable. A low-tech salt operation in the early 1950s would be the last time Dallol was operated as a mine.

A geological survey team’s trip to Dallol in the 1960s was the final attempt at organized mining in the area. The mining infrastructure was rumored to have been sabotaged after World War II, and most everything of value was evacuated.

Hopes of renewed operations in the years since have failed. If the economics of accessing the remote location weren’t enough of an obstacle, the on-going tensions between Ethiopia and Eritrea have created a hostile environment, further preventing any large-scale mining operation from operating safely.

Unfortunately much of the history of Dallol is forgotten as few records survived. Today the town has long been abandoned, only the remnants of salt-block walls remain (see on google, or bing).

Still, the rusted skeletons of long-dead trucks dot the landscape. A boiler from a locomotive sits alone nearby, its host engine long missing. Axles from mining rail cars are strewn about, corroded from years of salt exposure.

The area is not completely abandoned as many Afar still make the nightly trek to Dallol for the salt, the only abundant natural resource of value.

The Afar workers cut the salty crust into square slabs for shipment back to Mek’ele, the closest city center. A long procession of camels then transports the slabs over 60 miles for processing into salt.

Future attempts to re-establish large-scale potash operations at Dallol are unlikely as long as the worldwide supply is not threatened. It simply isn’t rare or valuable enough for large companies to accept the risk of conducting operations in such a hostile environment.

A Trip to Dallol: