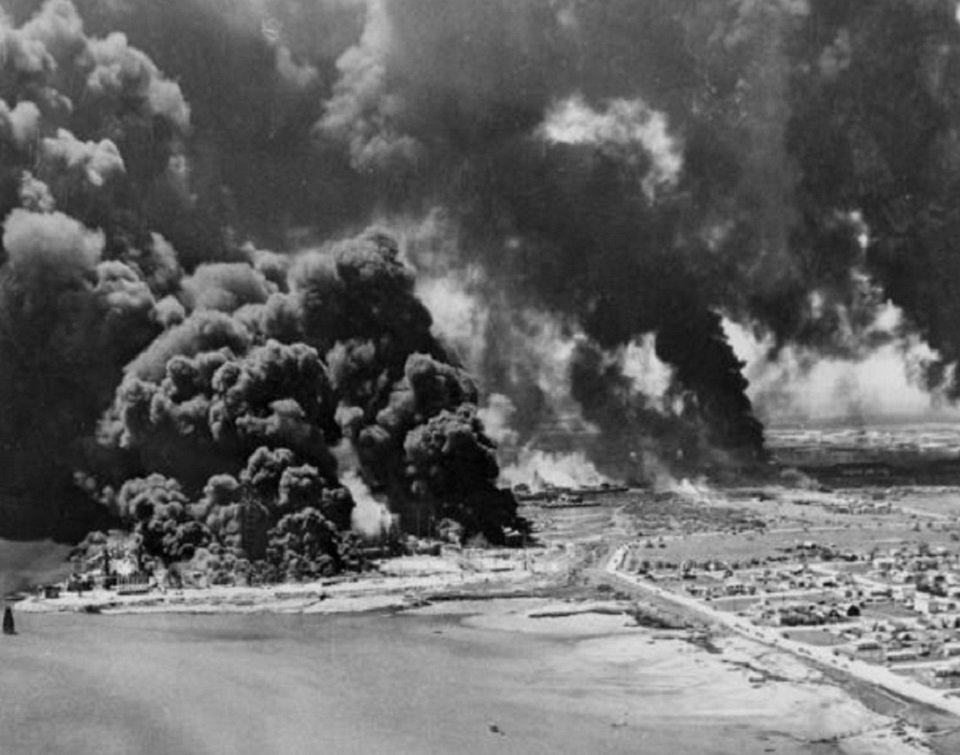 Across the bay from Galveston in Texas is Texas City, a busy port with convenient access to Houston and the Gulf of Mexico. In addition to shipping, the city plays an important role in the production and refining of petroleum products. As a port with deep water access to the coast, Texas City hosts international shippers hauling everything from electronics to fertilizer.

The town made headlines in 1947 when a fire on a cargo ship reached the explosive payload and detonated. The blast was one of the largest non-nuclear explosions in U.S. history, and the disaster would claim the lives of nearly six hundred people. 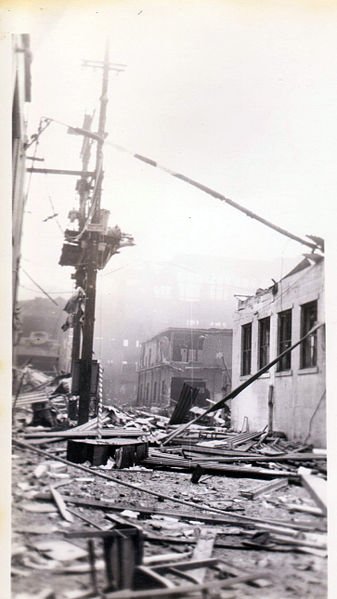 During World War II Texas City had emerged as a vital port for the United States, replacing the supply lines of oil interrupted by enemy submarines on the east and west coasts.

The town’s location was ideal; inset from the Gulf of Mexico behind Galveston, Texas City offered an insulated distribution point for shippers.

The population quickly grew while the newly-established refineries and chemical plants ramped up production. The town would play a key role in supporting the war effort and continued to grow even after VJ Day in August of 1945.

After the war, the strategic mission of Texas City’s port was diverted – but the town was no less important to the refining and shipping communities than before.

In post-war Europe the discussion had shifted from the fall of the Third Reich to a focused recovery effort. European farmers lacking vital supplies relied on the United States and other allied forces to provide assistance.

Texas City became a hub for the shipping of ammonium nitrate, used in agriculture as a high-nitrogen fertilizer. The chemical compound is also a strong oxidizing agent and requires great care in handling, especially around combustible items.

This risk prevented the Port Authority of Houston from authorizing the hazardous cargo to clear its docks. The Port of Texas City, however, was smaller and eager to attract business. The town seized the opportunity, and became a distribution hub for ammonium nitrate.

The S.S. Grandcamp was a French-operated 437-foot vessel tasked with assisting the rebuilding of war-torn Europe.

In addition to 2,300 tons of ammonium nitrate, the ship was carrying ammunition, machinery, and bales of twine. It had just been loaded with supplies and was getting prepared for its journey across the Atlantic.

But the Grandcamp would never deliver its payload.

At approximately 8 a.m. on April 16th, 1947, ship workers noticed smoke emerging from the cargo hold of the docked Grandcamp. First responders attempted to quell the smoke with water and fire extinguishers, but they failed to contain the blaze.

Next, the captain ordered the crew to ”steam the hold,” a method of fire suppression in which steam is directed toward the fire to contain it while preserving the cargo. But the captain was too late, the hull had already reached extreme temperatures. Witnesses reported seeing the water around the ship boiling and instantly vaporizing upon contact with the hull.

Slowly, the cargo hold started to bulge as the steam increased the pressure inside. Just over an hour later, the fire had finally penetrated the cargo hold of ammonium nitrate.

The explosion rocked the port and Texas City. The Grandcamp spewed a mushroom cloud 2,000 feet in the air, blanketing Texas City and most of Galveston. The blast ignited multiple other ships at port, forced a steel barge ashore, and sent a 15-foot surge of water for miles. When the water receded it carried cars and people back into the fiery bay, by now a burning basin covered in oil.

An estimated one thousand buildings were completely destroyed and countless others set on fire from the hurled debris. Citizens as far as 10 miles away were sent to their knees, even witnesses in Houston reported shattered windows.

The shock wave from the explosion was so powerful, it was reported to have knocked planes out of the sky. 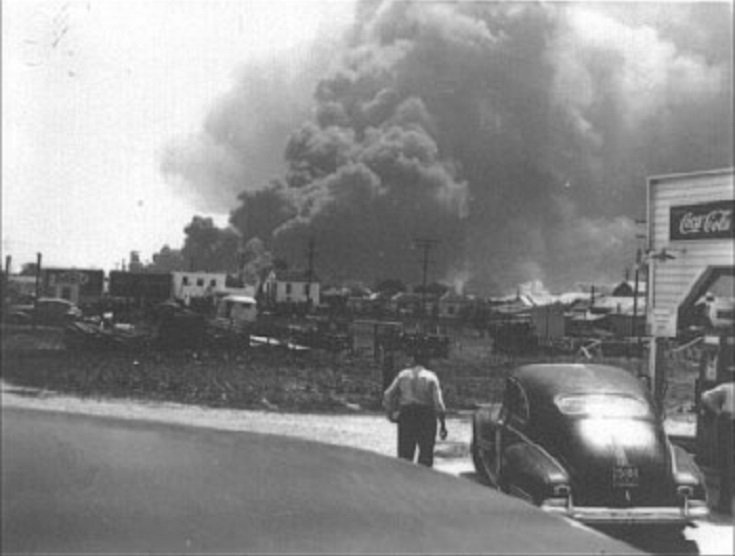 More than five hundred homes were leveled and countless others damaged. The two-ton anchor of the Grandcamp was found 1.6 miles (2.6 km) away in a 10-foot crater. Flaming shrapnel would continue to fall out of the sky over Texas City for several minutes, setting buildings, refineries, and homes on fire.

Experts estimated the blast contained the equivalent of 3.2 kilotons of TNT, rivaling the yield of a non-nuclear bomb.

For hours after the Grandcamp explosion, all available hands were at ground zero assisting with the emergency. Other vessels in port quickly became an afterthought, their captains ordering all available personnel to help the Grandcamp.

Unbeknownst to the emergency responders was one of the nearby ships – also carrying flammable cargo – had caught fire and was in danger of repeating a similar episode. 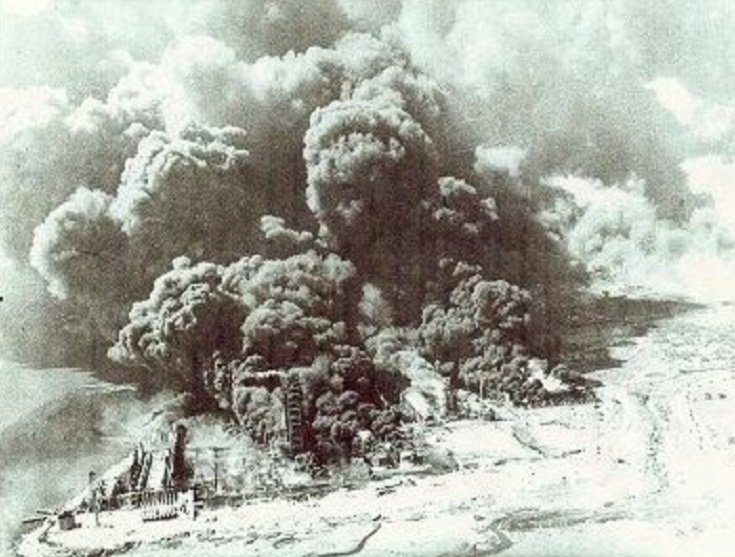 A rescue crew combing the port for survivors noticed the cargo hold of the High Flyer emitting flames. The emergency personnel didn’t realize the second ship was carrying ammonium nitrate along with a large amount of sulfur.

The rescue team immediately notified port authorities of the fire, but ignorant of the cargo they neglected to call for evacuation procedures. Initially few realized the danger; when the High Flyer crew was finally notified, they alerted the emergency crews and retreated to their ship.

The crew of the High Flyer tried valiantly to get the cargo out of harm’s way before it would be ignited as well. They spent hours trying to free the ship from its anchor and other entanglements, to no avail. When authorities realized the fire was accelerating and the ship would not be freed safely in time, the crew was ordered to abandon ship.

Less than an hour later, the High Flyer exploded, rocking the port for the second time. What wasn’t obliterated by the Grandcamp explosion was finished off 15 hours later by the High Flyer’s blast.

The second ship was carrying less ammonium nitrate than the first, but the result was no less catastrophic to the port of Texas City. Adjacent ship SS William B. Keene, moored next to the High Flyer, was also destroyed in the second blast. Once again, flaming debris rained down for miles.

The High Flyer’s propeller would be found a mile inland, and was cracked in several places – a testament to the power of the second explosion.

Many inland properties spared from the falling fiery debris of the Grandcamp explosion were later damaged by that of the High Flyer. The debris also ignited oil tanks and started chain reaction fires in every direction.

Thick black smoke would hang over Texas City for days. Every building, body, and car was covered in a thick oily residue. 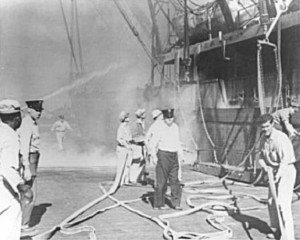 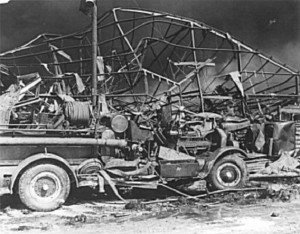 Hundreds died in the initial blast. The explosion of the Grandcamp was so intense, those on board the ship were instantly vaporized.

Children playing near the docks, fishermen, and other spectators perished in the explosion. The survivors of the explosion succumbed to the falling debris. 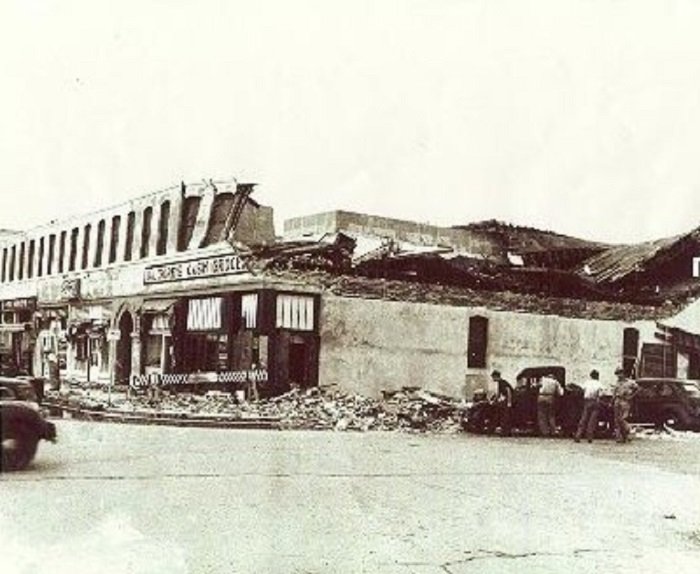 Still others were swept by the surge wave; if they didn’t drown, they were carried back into the fiery bay burning and covered in oil.

Texas City’s fire department would display unbridled heroism in their valiant attempts to control the blaze, but there was little that could be done.

All but one member of the department would perish in the disaster.

More than 5,000 people were injured and 581 fatalities were reported – although many believe the true number to be higher as it does not account for fishermen, tourists, non-census workers, visiting port workers, and other seamen.

Countless others reported missing were never found, assumed to have been vaporized or lost to sea.

Sixty-three of those recovered have never been identified.

Witnesses described the Texas City landscape as similar to the photographs they had seen of the devastation at Nagasaki. Over 1,100 vehicles and 362 freight cars were destroyed. More than 500 homes were obliterated while hundreds more were damaged, leaving over 2,000 residents homeless.

Property damage estimates in 1947 totaled $100 million U.S. ($1.05B in 2013 dollars), and some estimates had the refineries’ petroleum losses at up to $500 million. The rubber factory, the Monsanto Chemical plant, and several refineries were also destroyed.

The news of the disaster spread quickly, making headlines across the country. 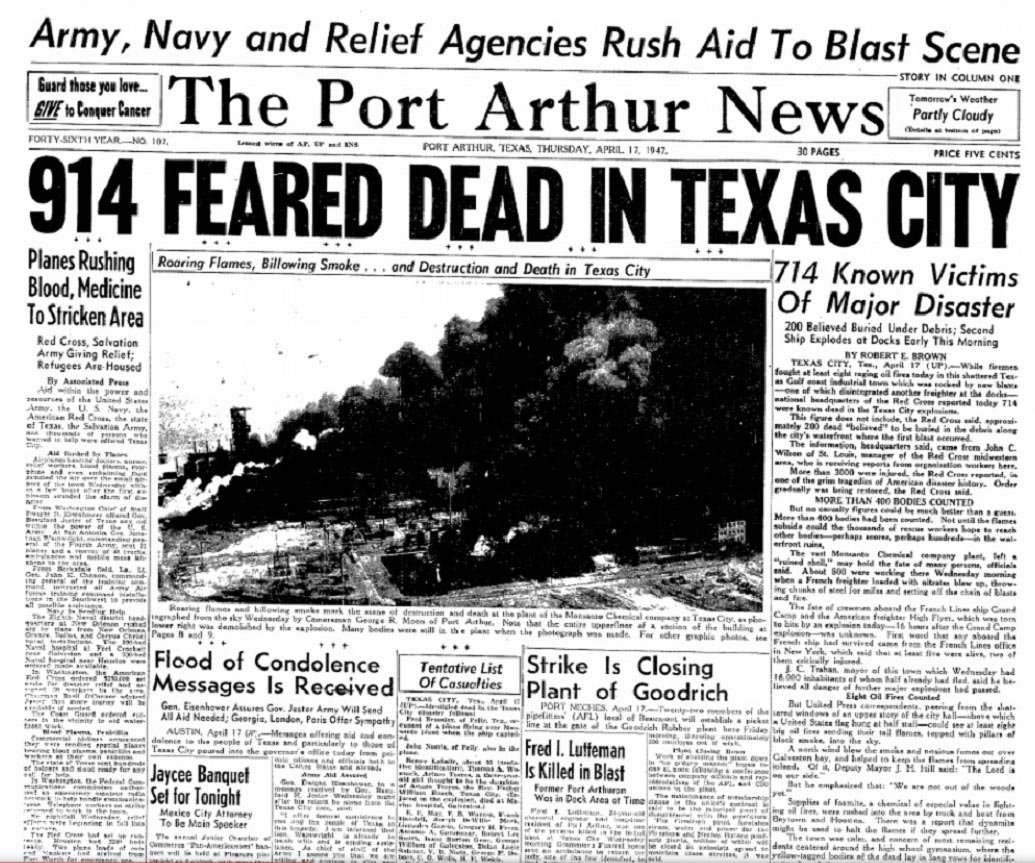 A funeral service was held for the victims on the morning of June 22, 1947. Fifty-one funeral homes assisted in the procession in front of thousands of spectators, who lined the street with their cars for one and a half miles on either side.

The remains of each of the unidentified victims were buried in an honorary memorial cemetery on the north side of town (see map). An inscription on the stone pillars on either side of the gate reads “Memorial Cemetery Texas City 1947.”

A small pool with a marble angel overlooks the manicured park. Initially, each burial plot had an inscription number which linked the deceased to their known personal details for later reference – but over the years the park had fallen into disrepair and many of the markers were lost, leaving the identities of many a mystery forever.