Turkmenistan is seventy percent desert – the Karakum Desert, to be exact. The nation is divided into five provinces, the second largest being the Ahal Welayat, which occupies the south-central portion of the country. Ahal is almost entirely desert and contains just fourteen percent of the country’s population, but it is also rich in natural resource deposits.

Soviet scientists discovered a cache of oil reserves near the town of Derweze in the Karakum Desert, and drilling quickly commenced. But when a drilling rig collapsed it created a crater, and large amounts of methane were released. When the oilmen attempted to burn off the methane, it started a fire in a “door to hell” that still burns over forty years later. 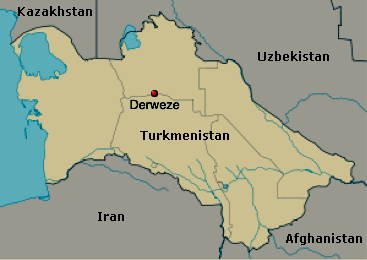 The village of Derweze (also known as Darvaza) is centrally located in Turkmenistan, its 350 tribal residents braving the inhospitable conditions of the desert for hundreds of years.

Nothing could interrupt the peaceful and quiet lifestyle of the nomadic tribe, aside from sitting on a valuable cache of natural resources.

In the late sixties the Soviet Union sent exploration teams across the continent to locate deposits of gas and oil. By 1971 one of the groups had located what was believed to be a rich deposit underneath the village of Derweze. A camp was established, a drilling rig quickly set up, and operations began shortly thereafter.

As the drilling started, the petrochemical scientists started estimating the quantity of gas reserves available at the site. Initial estimates were positive, and when the Soviet drilling rigs confirmed their findings, production was increased to full capacity and they began storing the gas. 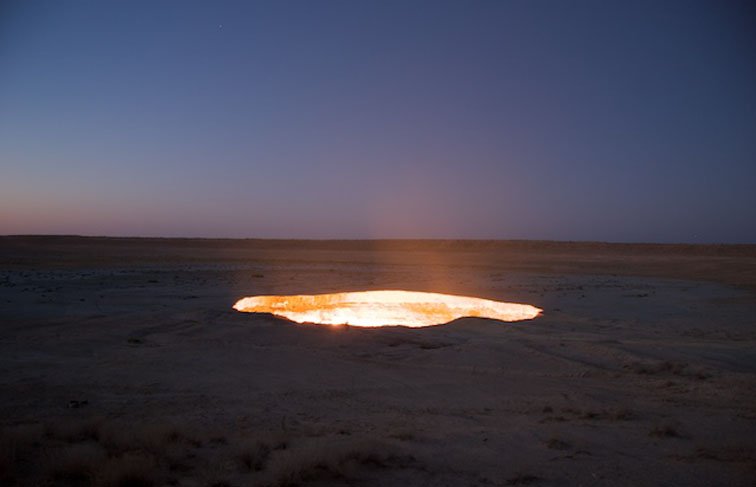 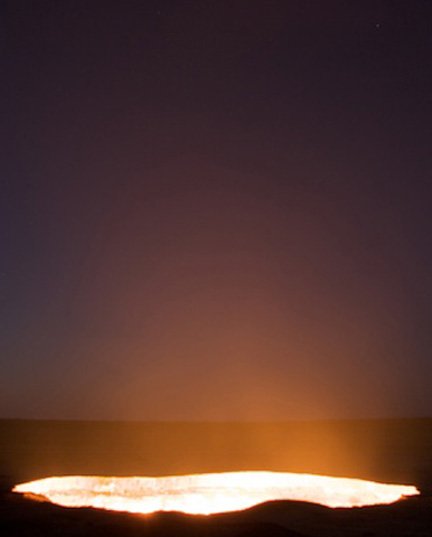 Disaster would strike soon after when the ground beneath the drilling rig gave way and sent the camp into a poisonous sinkhole. Miraculously no lives were lost in the disaster, but large quantities of methane gases were released into the atmosphere.

This created a significant environmental concern while threatening the health of the Derweze villagers. When methane (a dangerous greenhouse gas) is burned, it is a greater contributor to global warming than carbon dioxide.

The geologists determined the best course of action was to set the crater on fire. Burning off the excess methane over several days would be far cheaper and safer than using expensive equipment for extraction, which could be dangerous and take months.

Unfortunately, initial estimations of the site’s reserves were extremely low; when the scientists lit the gas, it erupted and didn’t stop burning. Over forty years later, the fire still burns. Locals quickly dubbed the site the Door to Hell and the Gas Crater of Darvaza. 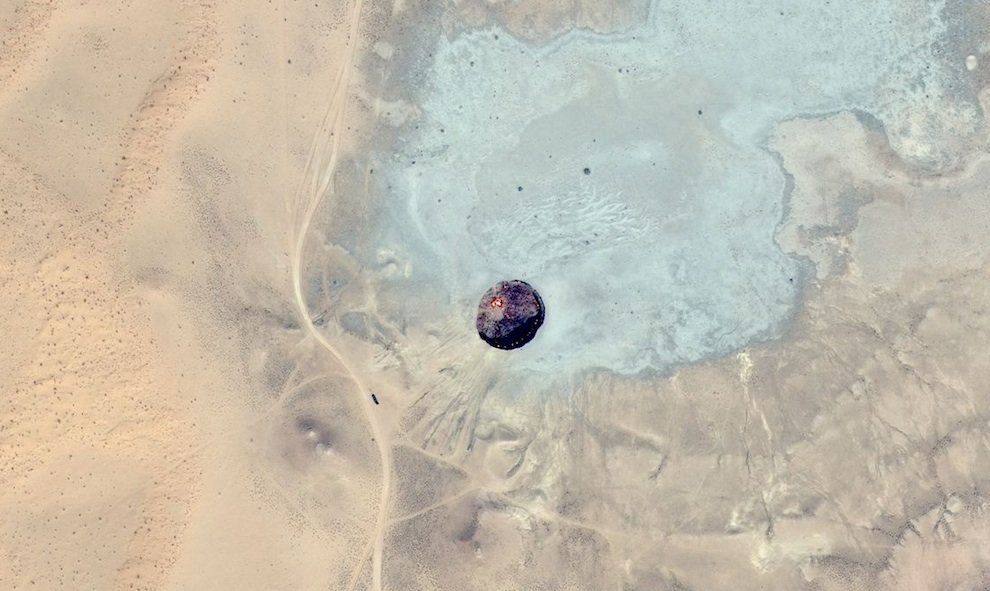 The collapsed drilling crater is large, measuring 230 feet across (70m) and 66 feet deep (20m). The unpleasant smell of burning sulfur permeates the area for hundreds of yards in every direction while its recesses spit boiling mud with orange flames licking high from the molten rock.

Over growing concerns, the President of Turkmenistan ordered the village of Derweze to disband in 2004 – but not for safety reasons. Leader Saparmurat Niyazov claimed the village was an unpleasant sight for tourists to the crater. 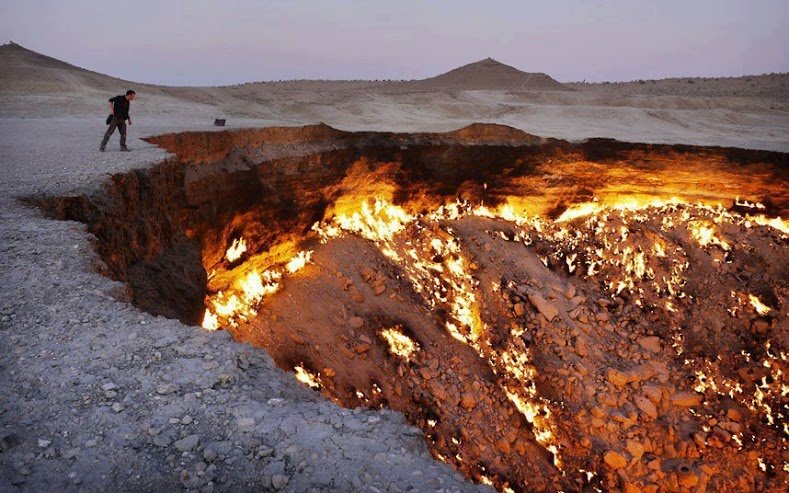 In April of 2010 Turkmenistan leader Berdimuhamedow visited the Door to Hell and ordered it to be closed. The exposed burning “door to hell” hinders additional drilling in the area rich in natural resources. With the crater closed, Turkmenistan could resume drilling and provide more revenue.

But by July of 2013 no action has been taken and the Darvaza gas crater fire still burns.

Since the disaster in 1971 there has been little exploration in the Karakum Desert. Turkmenistan has concentrated its effort in the Caspian Sea at Dauletabad-Donmez by the Iranian border and along the Amu-Darya Basin bordering Uzbekistan.

Over the past several years exploration in the desert has increased, both at the large South Yolotan/Osman gas fields and at Gutlyayak.

Turkmenistan has the fourth-largest reserve of natural gas in the world, and currently produces 75 billion cubic meters each year. Despite such riches of natural gas, the country has struggled to fund a cleanup operation.

To the country’s credit, leadership has announced a desire to clean up the site and close the Door to Hell. But until the country is given financial assistance or pressured politically, it appears unlikely the Door will be closed any time soon.

Thanks to reader Carlos Chame for story suggestion