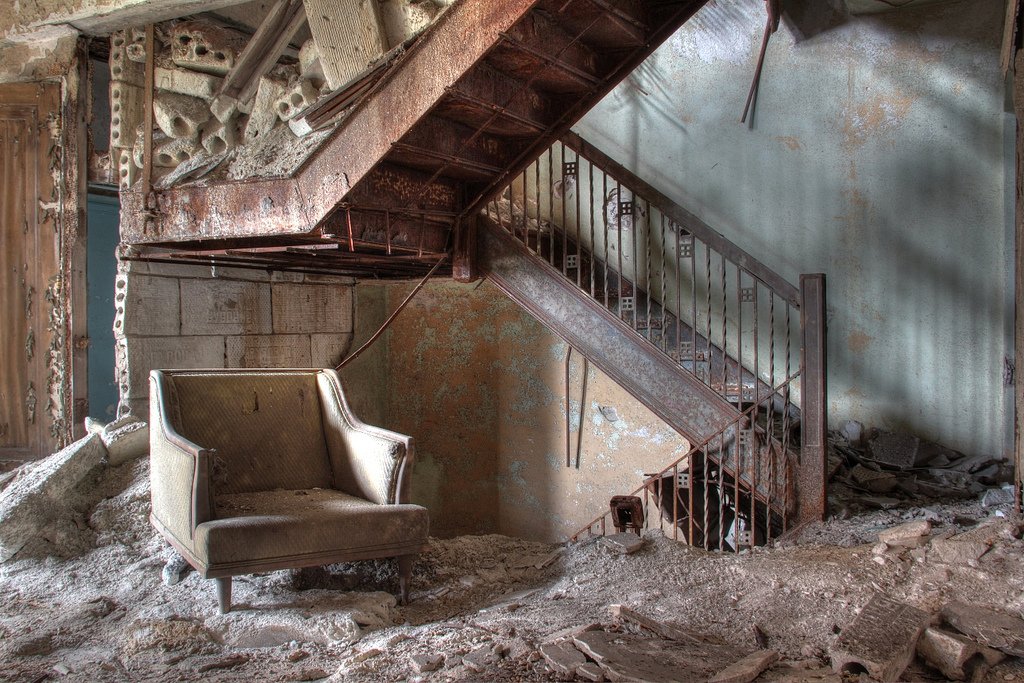 There certainly isn’t a dearth of classic early twentieth century architecture around Gary, Indiana. Another fine example is that of the Ambassador Apartments at 574 Monroe Street. Finished in 1928, the luxurious building featured views and amenities no other place in town could match. Initially it would cater to Gary’s high society, but decades of economic decline and neglected maintenance would take its toll on the building.

The Ambassador Apartments would serve Gary for nearly six decades before it succumbed to economic and structural failures. Today it still stands, abandoned for over 25 years and crumbling beyond repair. 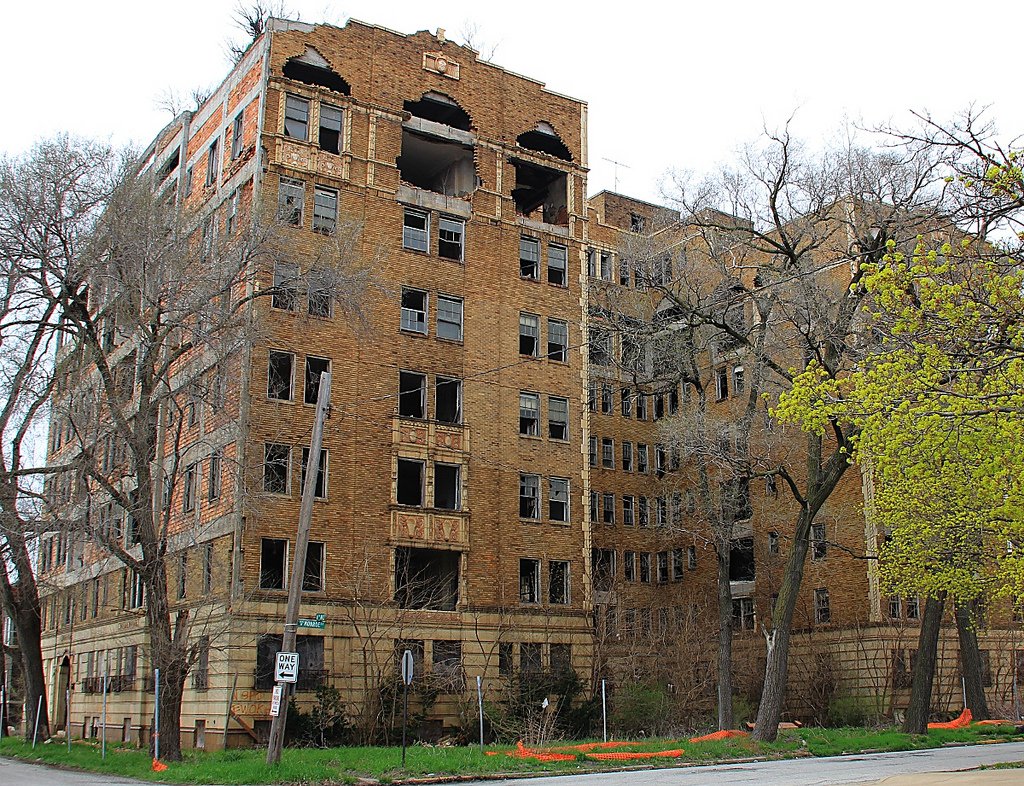 During the 1920s the population of Gary would double. In order to attract and keep good leadership, U.S. Steel needed quality housing available for its managers. Plans were soon conceived for a 68-unit apartment building near the heart of Gary and not far from the Gary Works steel plant.

The building would be named the Ambassador Apartments, and architect William Stern was asked to provide the design. Construction began in 1927 and the building was ready to accept tenants the following year.

At eight stories tall, the Italianate structure was one of the tallest residential buildings in Gary. The Ambassador was lavishly trimmed in sculptured, cream-colored terra cotta. The swanky domicile was a proud structure, constructed with nicer amenities than provided to the blue-collar steelworker of the day. 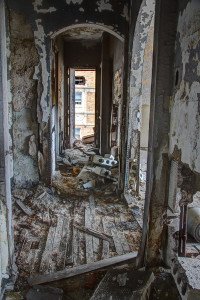 The Ambassador Apartments served the gentry for decades, but it was not immune to the struggles of the steel industry and white flight of Gary.  When racial integration swept Gary during the 1950s and 60s, the proud Ambassador was one of the last apartments buildings in town to integrate.

Once Gary’s first black mayor was elected in 1967, the occupancy rates dropped. By 1970 the building hadn’t been maintained for almost a decade. During the early 1970s the apartments were converted into low-income housing.

But the building would still not be maintained, and would further deteriorate.

The building would continue to serve the low-income community of Gary until 1985, when structural and maintenance costs finally became too expensive to keep it operational. When the walls started to crumble, safety inspectors condemned it.

After the final tenant moved out, the 58 year-old building was abandoned.

After it closed in 1985, the Ambassador enjoyed a temporary revival when Gary’s underground moved in. Homeless would stake claims in rooms and prostitution arrests around the building were common. Thieves salvaged piping and vandals broke windows and left graffiti murals on walls.

In 1990, residents noticed a drive-thru drug business operating from the building. Buyers would place orders and pay in front, then circle down the alley to pick up their purchase.

As the property tax bills on the abandoned property accumulated, the Lake County Board of Commissioners eventually assumed control.

The County Commissioners Office tried to sell the building at auction, but because the property included a large outstanding bill to the city, it had a negative value. Despite several attempts by Lake County, it never sold. 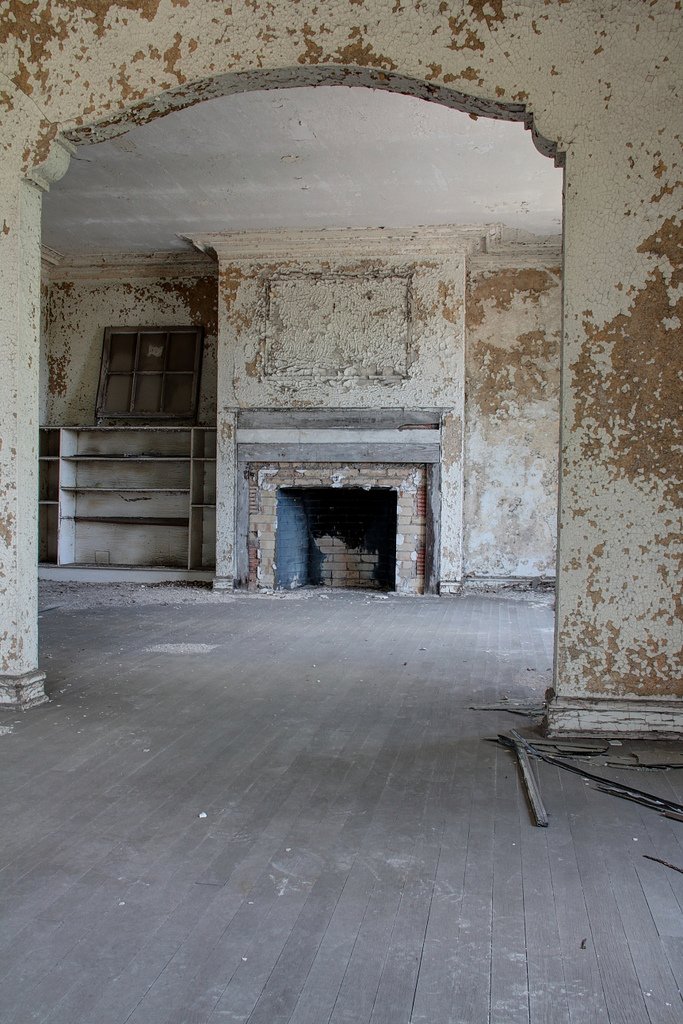 In 1993 the Lake County Board of Commissioners donated the property for redevelopment. A group of investors spearheaded by the Jefferson Park Community Development Corp. put together a proposal to renovate and re-open the apartment building.

The joint venture also involved the city of Gary along with private investment groups Agee International and Florida firm Ocwen Financial. A combination of federal block grants obtained through the city and state income tax credits would offer $4.5 million in financing for the project.

Housing would be affordable, with sixty-six 1- and 2-bedroom apartments planned to lease between $350 and $500. The top floor would be converted into two family-sized penthouses.

On November 29th of 1994, Jefferson Park Community Development Corp. announced it was ready to begin construction on the Ambassador Apartments. They reported the final part of financing for the deal had been put in place just a month before by Mayor Thomas V. Barnes.

“There was a kid about to throw a brick through one of the windows. We stopped him and told him we were trying to fix the neighborhood. He put it down and asked how he could help,” said Jefferson Park President Otis Sibley. “The kids will follow if they have good leaders.“

The project had now grown to an estimated $4.7 million in cost, but now it had committed funds from the Community Development Block Grant’s 1995 budget.

The community celebrated the news and held a dedication ceremony for the renovation. A lavish reception ceremony was held nearby at the First United Presbyterian Church. 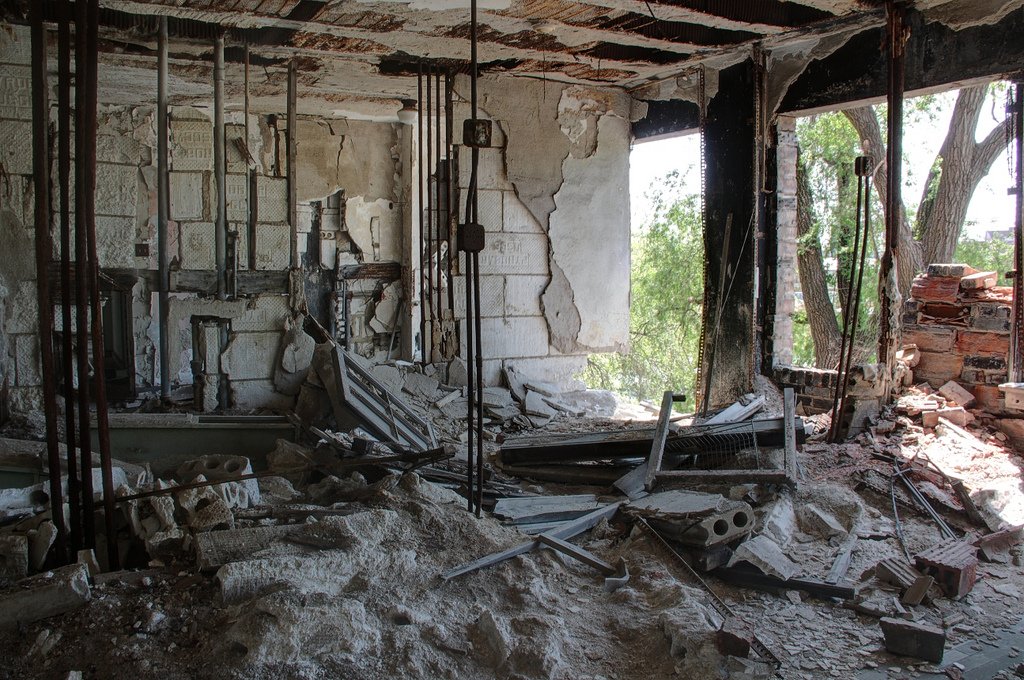 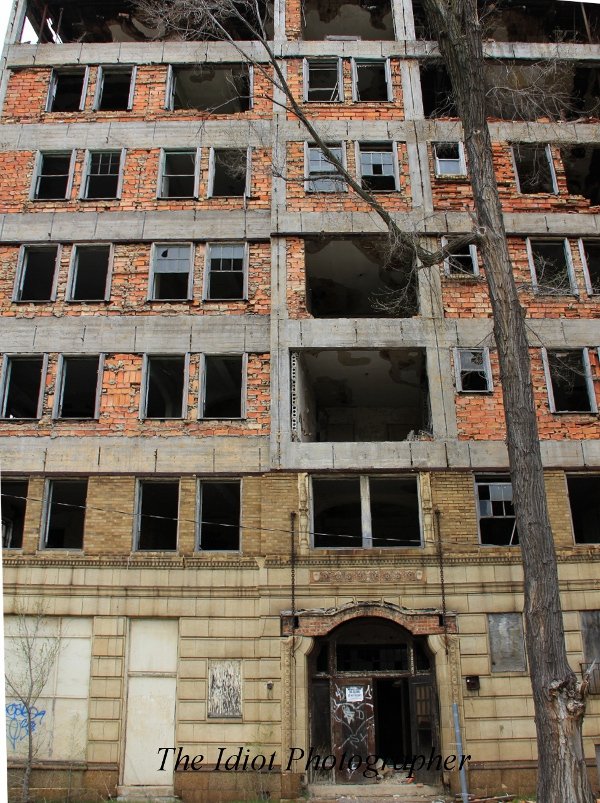 In 1995 the city of Gary released the Gary Consolidated Plan with proposals to distribute funds to different projects around the city in an attempt to begin rehabilitation around the city. Local architect Phillip Johnson was tasked with the renovation.

As part of Gary’s “One Year Action Plan,” a feature bullet point stated:

“Ambassador Arms rehabilitation. The Jefferson Park Community Development Corporation will receive a loan of $650,000 in CDBG funds to rehabilitate the Ambassador Arms Building, which will have 78 apartments available to low- and moderate-income persons.”

While it was designed with noble intentions, the idea was optimistic. By 1995 the plan’s total estimated cost to renovate the Ambassador had ballooned to $5.5 million dollars.

On December 30th of 1995, architect Johnson announced the project was proceeding and should be completed in 12 months. He then shared that workers had already begun demolition of the interior.

However the workers would not get far before the project stalled; for reasons not made public, the expected funding had failed to materialize. When questioned about the deal, Agee, Ocwen, and the city all had no comment. 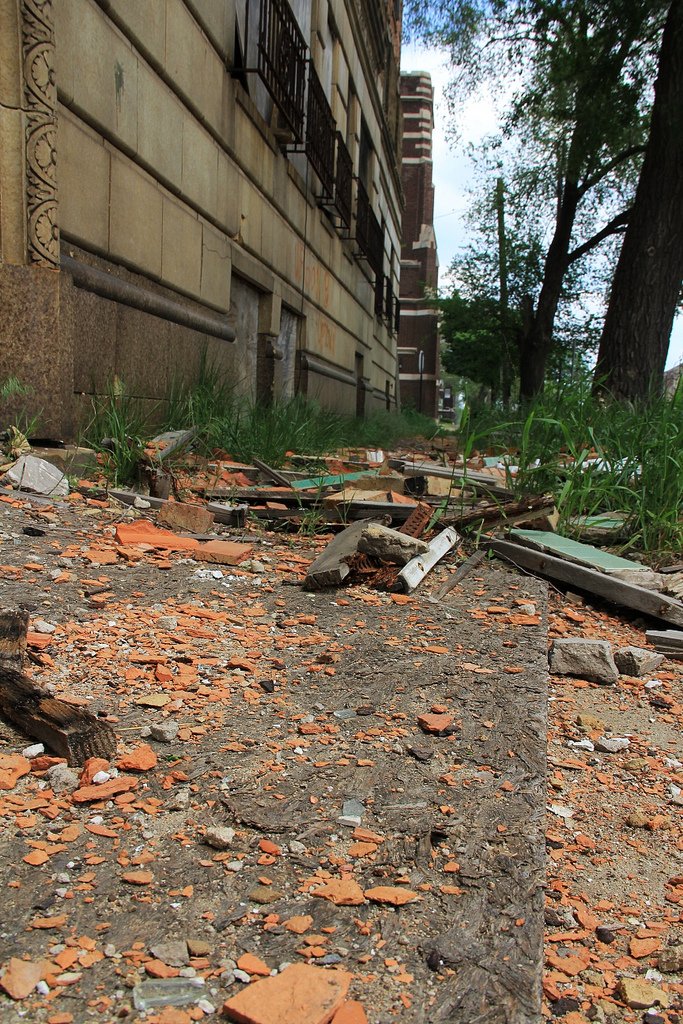 The failed redevelopment attempt was the last hope for Ambassador. The late 1990s witnessed a dip in real estate values which compounded the problems for Ambassador and cash-strapped Gary.

By the turn of the century, the building was in terrible shape and beyond repair.

In March of 2005 Mayor Scott King announced he was soliciting bids for demolition of several buildings around Gary, one of which was the Ambassador Apartments. This too, would fail to achieve the necessary funding and nothing became of it.

For another seven years various articles would claim the building “would soon face the wrecking ball,” but it managed to avoid the proclaimed fate every time. In the summer of 2012, the city was forced to block off the area around the building because debris was falling onto the streets and sidewalks (below right). 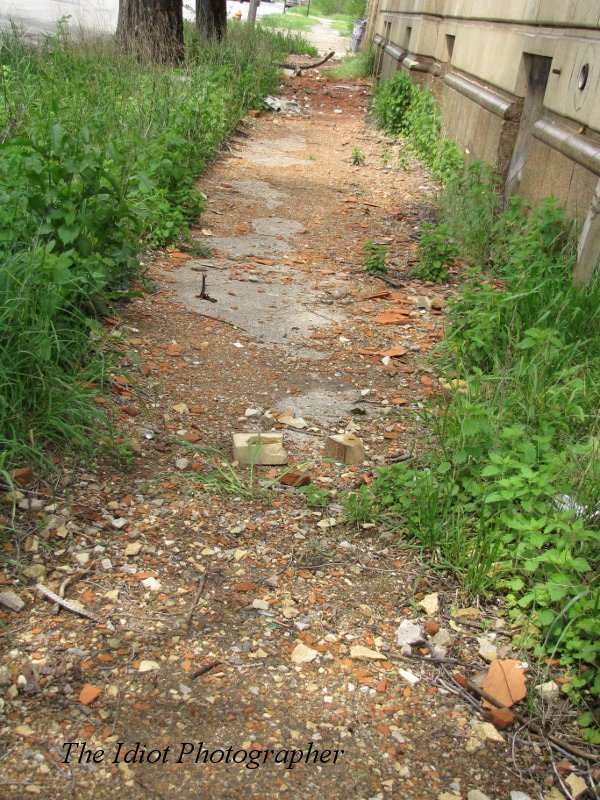 More recently, a November 2012 report again stated the city finally had the money for demolition. But as of this post, the building still stands – albeit just barely. The Ambassador Apartments have been left to slowly decay.

Exposure to the elements has taken its toll on the unmaintained building; sections of exterior wall have completely fallen off the building and a gentle breeze frequently sends pieces of terra cotta to the ground below.

Despite the decay, the building still manages to project an image of majesty from a bygone era.

If Gary doesn’t tear the building down soon, mother nature might beat them to it.

UPDATE 06/2017:  Thanks to reader Whitney Kaharick we know the Ambassador Apartments building has been demolished.  A quick check of Google satellite view confirms this. 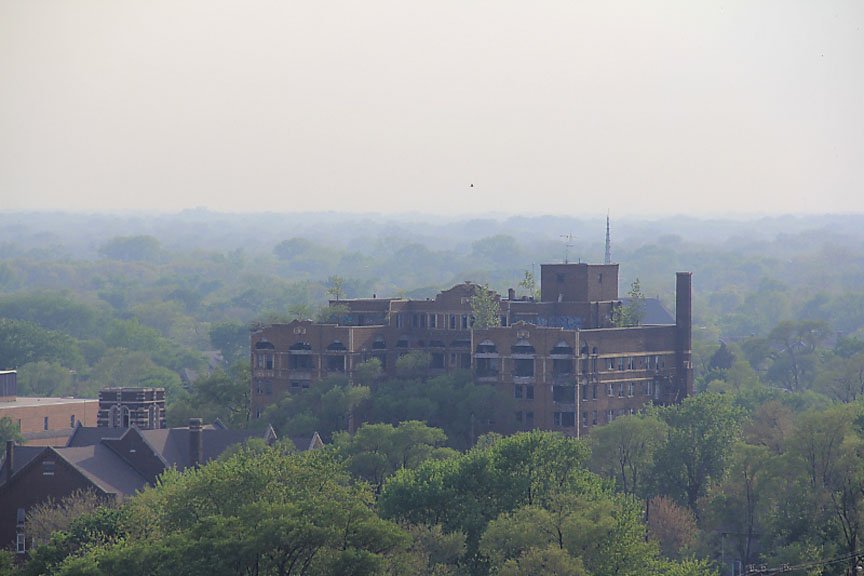 Sometimes Interesting has teamed up with the Idiot Photographer to bring our readers a unique insight to the history of Gary, Indiana. Over the course of this month we will feature various structures and tell their history. 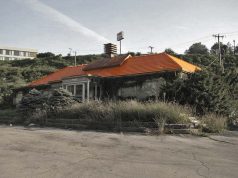 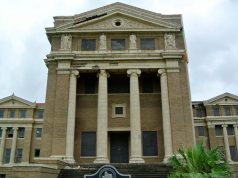 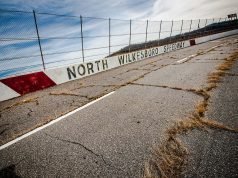