On the Maryland side of the Potomac River just west of Chesapeake Bay, the largest shipwreck fleet in the Western Hemisphere sits half-sunk and decomposing.

In the early 20th century, hundreds of U.S. vessels were sent to Mallows Bay to be destroyed and scrapped – and to this day the remains of dozens can still be seen in the shallow water.

How did the ships end up here and why were they abandoned?

Call For One Thousand Ships

The story of the ships at Mallows Bay begins when the United States entered World War I. The U.S. had warships, but a shortage of transport vessels led President Woodrow Wilson to approve, in April of 1917, the greatest shipbuilding program in history: an order for 1,000 300-ft long steamships to be built in only 18 months.

It was also one of the most expensive in history; each ship would cost the taxpayer almost one million dollars.

To monitor progress and enforce the contracts, the Emergency Fleet Corporation (EFC) was formed to oversee the 87 shipyards who would participate in the program.

With little time to ramp up production and prepare for the order, the shipbuilders were pressed to reach deadlines. To save time and money the builders used wood rather than the more expensive steel, at the time reserved for vessels that would see combat.

The lack of effective oversight was realized when a Congressional report in October of 1918 revealed only 134 ships had been completed.  A year and a half into the program, this was well behind schedule.

Over 260 ships were less than half-completed, and hundreds more had not yet been started.

Germany would surrender on November 11th of 1918. At that time, none of the quickly-commissioned EFC vessels had yet crossed the Atlantic. To this point, the program had officially approved funding and paid for 731 wooden steamships. While over 130 ships had been completed, only 98 had actually been delivered.  Of those, only 76 had been used to carry cargo as intended.

Despite the war being over the shipbuilding continued building. By September of 1919 the builders had delivered 264 steamships to the government. By this time the United States had no use for the ships; they were left to rot while the powers that be determined how to re-purpose them.

Complicating the situation were allegations of poor construction; corners were allegedly cut to speed up the building process. Ships suffered leaking issues, were poorly caulked, and were too small to be efficient long-distance shippers. Additionally, the invention of the diesel engine made the coal-burning vessels obsolete.

After World War I the war-effort levels of demand and high costs of steel subsided, moving the shipbuilding industry toward steel construction for all vessels. With steel becoming cheaper and more readily available, the end had come for the wooden EFC steamships.

By the end of December in 1920, Congress realized the failure and decided to take action. Nearly 290 unused leaking ships were being temporarily stored and cared for in the James River at a cost of nearly $50,000 per month – something had to be done.

Hoping to recoup some money, Congress listed all vessels from the program for sale at a steep discount. Two years later in September of 1922, Western Marine & Salvage Company (WMSC) purchased 233 of the ships in the fleet for $750,000.

The plan was to tow the fleet to an authorized mooring area near Widewater, VA for scrapping. They would retrieve the re-usable materials, then burn and sink the remaining hull into the marsh where it would be buried beneath dredged soil.

Complaints from local watermen and nature activists halted the operations at Widewater on the Potomac. In April of 1924, WMSC purchased 566 acres opposite Widewater in Mallows Bay on the Maryland side of the Potomac River.

This did not stop the protests, so WMSC was forced to act quickly. On November 7th, 1925, workers for the Western Marine & Salvage Company torched the ships in the bay (above left). Western Marine would continue salvage operations for the next few years but would never recover their investment costs. By the stock market crash in October of 1929, WMSC had brought 170 ships to the bay.

The dire economy of the Great Depression took down Western Marine with it – they would file for bankruptcy in 1931 and abandon the ships at Mallows Bay. For the next ten years the desolate fleet was left to rot and scavengers would do their own salvaging.

As World War II approached, the threat of war saw the price for scrap metal skyrocket. The U.S. government allocated $200,000 to Bethlehem Steel in the early 1940s to recover over 20,000 tons of iron thought to still be in the wrecks of Mallows Bay.

The project was massive, calling for the company to excavate a marine basin sealed off from the bay for salvaging. However the program proved too expensive; the ultimate cost of the salvage was far more than the value of the recovered materials.

By 1943 Bethlehem Steel terminated the program after spending over $360,000 on salvaging – with little to show for it. When Bethlehem Steel was done, there were still over 100 ship hulks left in the bay.

Mallows Bay in the Years Since

The sixties saw a renewed effort to clean up the area, with Congress bending to the calls of local watermen and initially approving the Army Corps of Engineers to spend up to $350,000 to clean up Mallows Bay. The bid failed when it was discovered the watermen had partnered up with the local power company who was looking to re-claim the land around Mallows Bay for private enterprise.

In March of 1993, a Maryland grant approved a study to research the fleet at Mallows Bay and measure its cost of disposal, effect on the environment, and to inventory what vessels were left for historical and archaeological purposes.

Over the next two years the researchers would identify 88 wooden ships left over from the original EFC program. Researchers also discovered the bay was used by Western Marine for more than just EFC vessels; twelve barges were discovered, as well as a Revolutionary War-era longboat, several 18th century schooners, miscellaneous workboats, and even car ferries like the S.S. Accomac (below).

Vessels would continue to be abandoned in Mallows Bay as recent as the 1980s. Researchers learned the hulks had created a mini-ecosystem in the Bay for fish & many birds.  The heavy concentration of wood enriched the shallow bay’s sediment, and the absence of diesel and oil polluting the water has presented a healthy habitat for many species of wildlife.

Ultimately, the EFC program was reported to have built 285 ships through August of 1920, and of those – 152 ended up in Mallows Bay within nine years. Experts estimate the remains visible in Mallows Bay today only represent 30% of the fleet sent there for salvage.

Reader Liz Johnson shares her picture and story of the boat below: 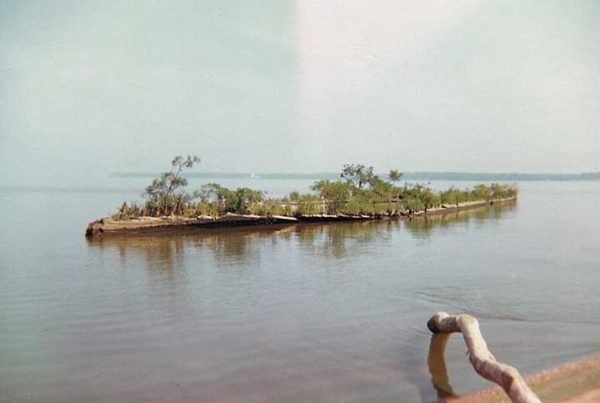 Attached please find the photo of the old abandoned boat. I think the photo is from around 1970-72. Noted the large cable in the foreground, which was part of what kept the boat moored to its spot, though there were more cables anchoring it under the water.

We were told my locals at the time that several people at different times had been killed in motorboats that got too close to the boat and got caught up in the lines, flipping the boat. The boat was moored directly in front of the old Chatterton farmhouse – which was right on the river, maybe 75-100 feet from the water’s edge. It was built in 1882 when the people that owned the Chatterton manor estate divided the property between four of the children (John Tayloe – not sure which generation – was the owner for probably 100 years or so)

I was told that at some point in the early 1900s, whichever of the Tayloe children (now adults) was living in the large manor estate – the man lost the property through gambling and the family had to move out of the large house into the smaller farmhouse on the river. However, when I requested Chatterton’s history from one of the descendants, she marked that part out of the papers she sent me. So of course, that was heresay. By the 1960s-70s, the old farmhouse was abandoned, like the boat. The house was surrounded by trees and so dark that between it and the boat – it was very scary and if you include the fact that people died there …

Lastly, a person committed suicide right by the boat one January in the early 1970s. She drove down there, took her shoes off, left her purse on the sand and walked into the water. They found her standing straight up – frozen. Again – that’s what I was told – her obituary has no mention of this, nor do any of the papers and because she died in the river, it was considered Maryland jurisdiction, not Virginia.

Our cabin was about a mile down river and my sister and I found the boat, house and history fascinating and during low tide, we’d sometimes walk down to it – in the river – just to scare ourselves.