Built in 1888, this Victorian home from a different era has braved the elements and fought shoreline erosion on Holland Island in Chesapeake Bay for well over a century.

Despite former resident and owner Stephen White’s best efforts to save the house and protect the island, the waters would overcome both and erase them from the map. 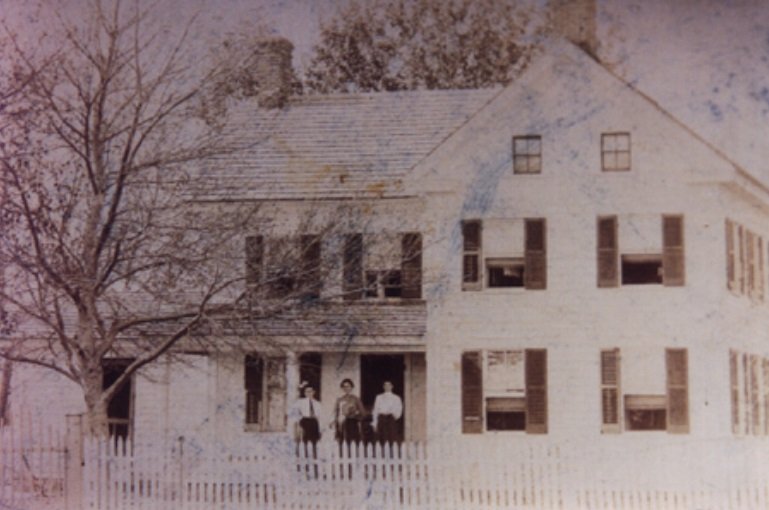 Originally settled in the 1600’s, Holland Island was named for the first owner of the property, colonist Daniel Holland. For nearly two hundred years life would be largely uneventful for the small island, with little more than a small colony settlement occupying her shores.

In the 1850s a small fishing and farming boom in the Chesapeake area brought many to the island. By 1890 there would be a large watermen community, and by 1910 the island would house nearly 360 residents, making Holland the most populated island in Chesapeake Bay.

At its peak, Holland Island was a thriving community. It had nearly 70 structures including homes and shops, a school, post office, several general stores, and a church. The island also had its own doctor, a community center, and even a baseball team that would travel by boat for away games. 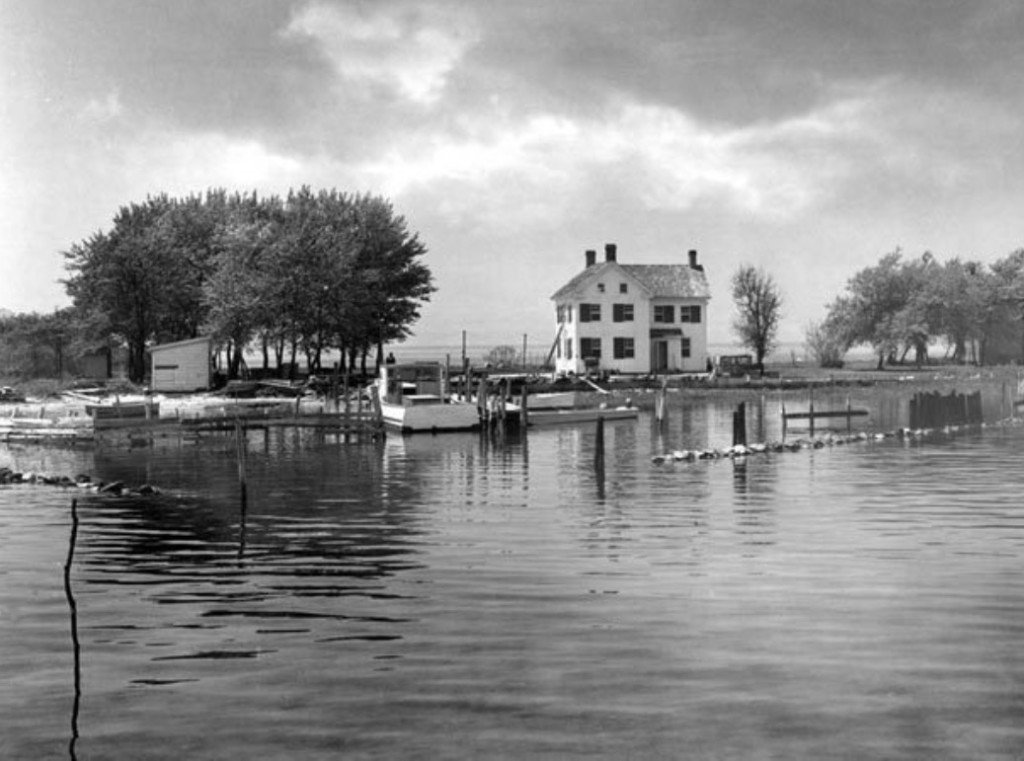 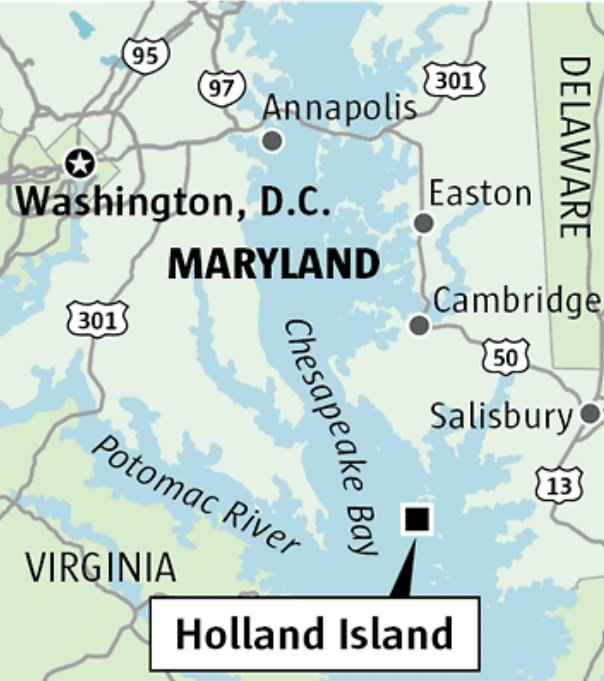 A unique feature to the islands in Chesapeake Bay is the composition of mud and silt rather than rock; this makes Holland Island more susceptible to shoreline erosion from exposure to crashing waves.

The lack of a rock foundation has seen the land slowly disappear for thousands of years, the result of post-glacial rebound from the Earth’s crust being pushed up and down from movement of ice-age glaciers long ago.

This combined with the melting polar cap has seen the Earth’s oceans rise, further accelerating the erosion process for the islands of Chesapeake Bay.

Holland Island started to noticeably lose shoreline in 1914. The residents tried desperately to save their island by importing stones to build walls and in some cases sinking boats in an attempt to slow the erosion, but all attempts failed.

This would force most residents of Holland to tear down their homes and relocate to the mainland. Some would stay and take their chances, but a tropical storm in 1918 was the final straw for the last family who would leave when the church was damaged from the rain and high winds.

A few stragglers would stay behind to reap what they could from the fishing seasons, but this ended when the church finally closed in 1922. 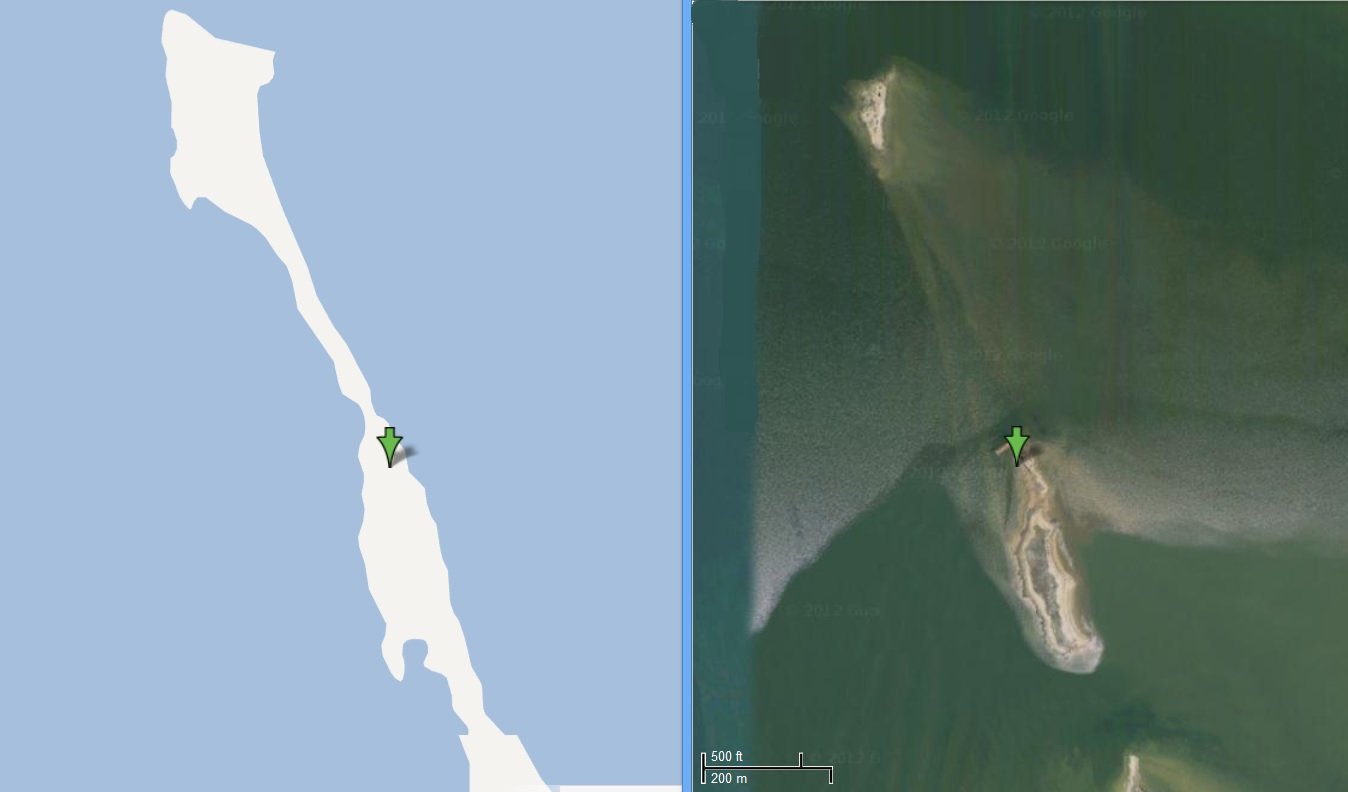 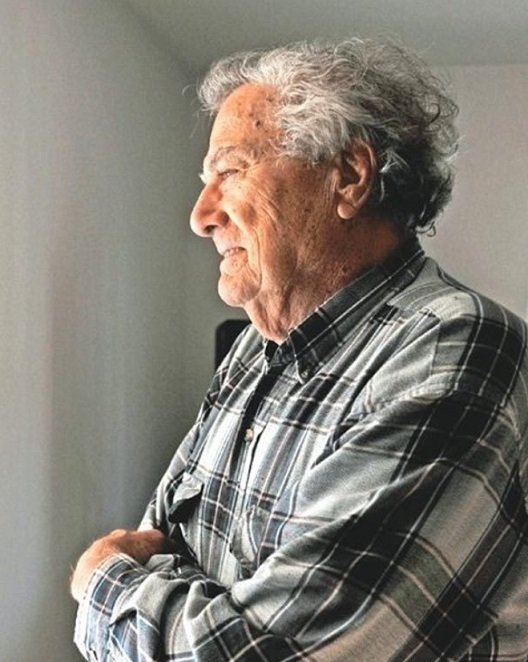 Holland Island would sit abandoned and neglected until 1995 when Stephen White (right), a Methodist minister and former waterman who grew up on the island, would purchase it for $70,000 and try to preserve its legacy by creating the Holland Island Preservation Foundation.

For 15 years Mr. White spent time and money attempting to stave off the water, but he had little success.

Stephen built breakwaters out of wood, but the waves devoured them. He and his wife feverishly laid sandbags only to watch them split open in the hot summer sun and dissolve in the high tides. They carried 23 tons of rocks to the island and dropped them at the shoreline, to no avail.

They brought an excavating machine and a small bulldozer to dig makeshift levees and replace shoreline, but the silt would not stand up to the waves. As a last resort Stephen even sunk a barge just off the house to break the waves, but the water could not be stopped.

White estimated he spent nearly $150,000 in his efforts to save the island, and he figured the island shrank by about 20 acres during his fifteen years of ownership.

Top: satellite view of the old house before collapse. Orange rectangle NW of house is sunken barge meant to act as a breaker. Bottom: the only remaining trace of man on the main island. 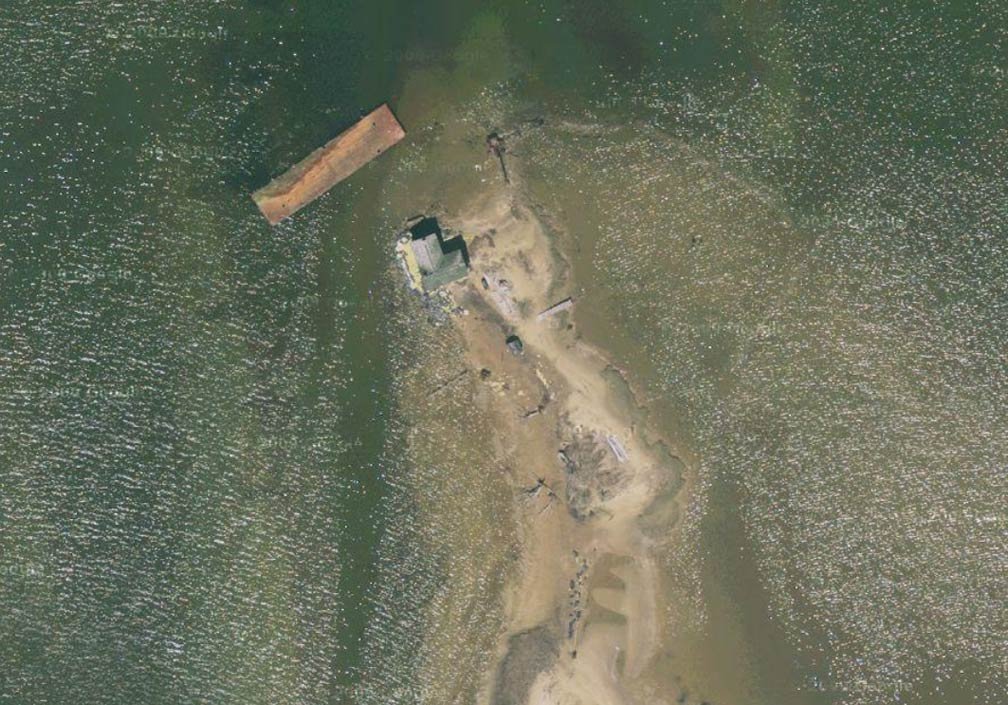 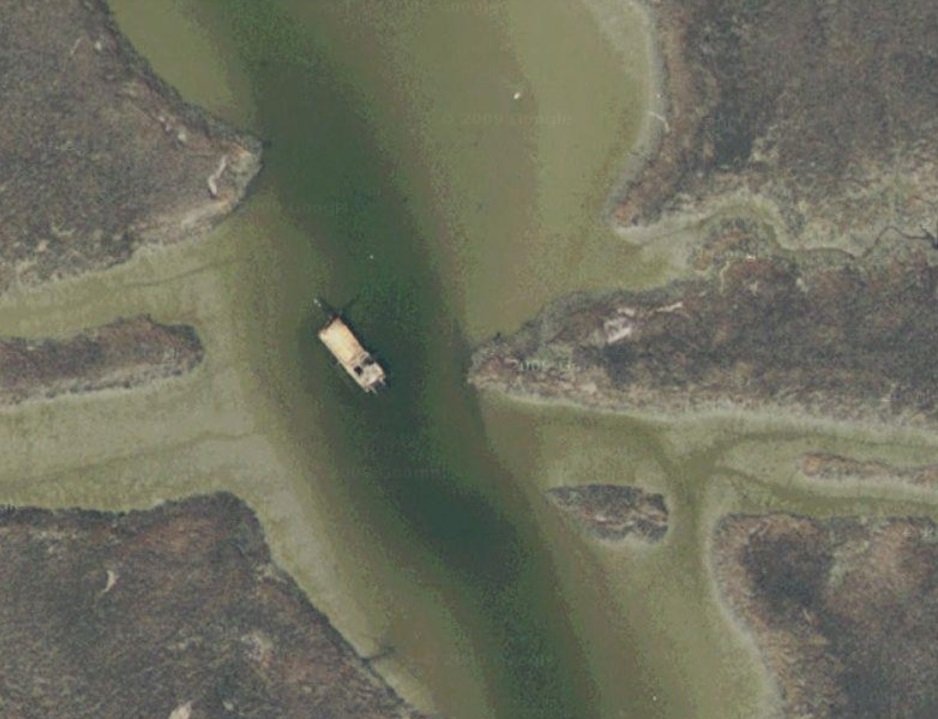 Government officials take the situation seriously but many factors conspire against them saving Holland Island. Most recently, the economic crisis of 2008 put any plans on a several-year hiatus.

Compounding the issue is the majority of the land around Chesapeake Bay is privately-owned – including Holland Island – and thus unlikely to receive public funds for projects.

In 1999 the Maryland governor did appoint a task force to study the erosion issues effecting Chesapeake Bay. In 2000 the task force released the report which revealed much about the environmental conditions effecting the bay, including the following:

“The State of Maryland loses approximately 260 acres of tidal shoreline due to erosion each year, resulting in a loss of public and private property, historic and cultural sites, recreational beaches, productive farmland and forested areas.”

Erosion has attacked Holland Island quickly in the last century. In the 90-year period from 1915 to 2005, the island saw its size cut in half from 160 acres to 80. What was once a 5-mile long island has been reduced to a swampy marsh that sits underwater at high tide.

The only residents of the island today are birds, including brown pelicans, herons, and terns. a 1995 survey would count over 600 nesting pairs of heron in Holland’s trees.

However in September of 2003 Hurricane Isabel would hit Holland Island destroying 60% of the remaining trees and decimating the avian population. 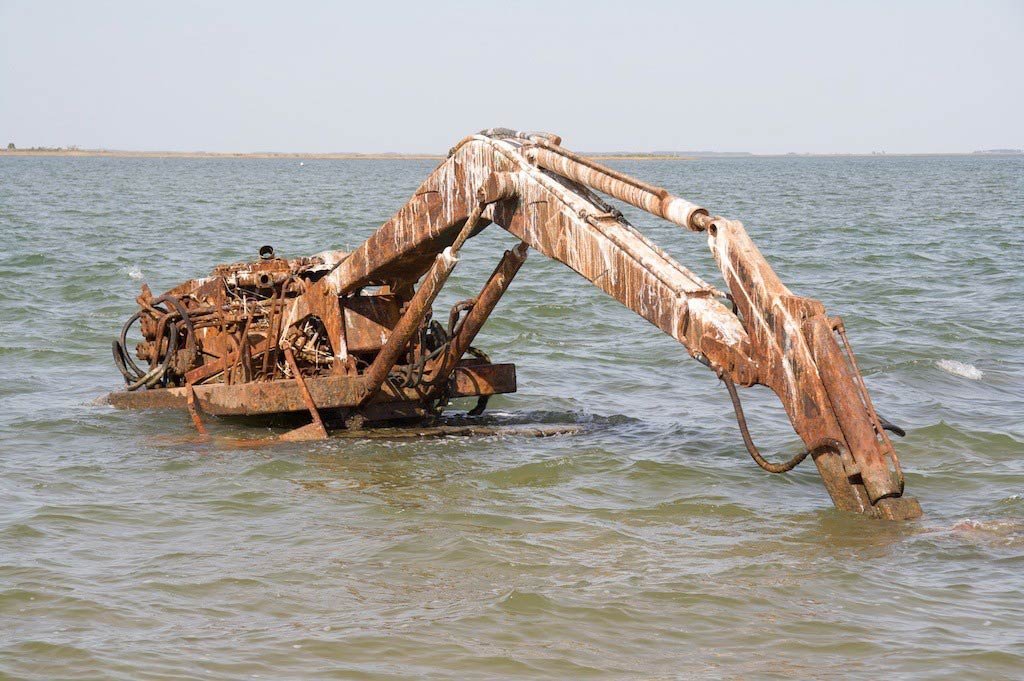 In mid-2010 Stephen White fell ill with hemolytic anemia. In declining health and realizing he had done all he could, Mr. White acknowledged the fight was too great and sold Holland Island to local venture capitalist group Concorde Foundation.

The foundation commissioned a photographer to take aerial pictures during a survey of the island in the fall of 2010. It would turn out to be the last known pictures taken of the house before it would collapse. 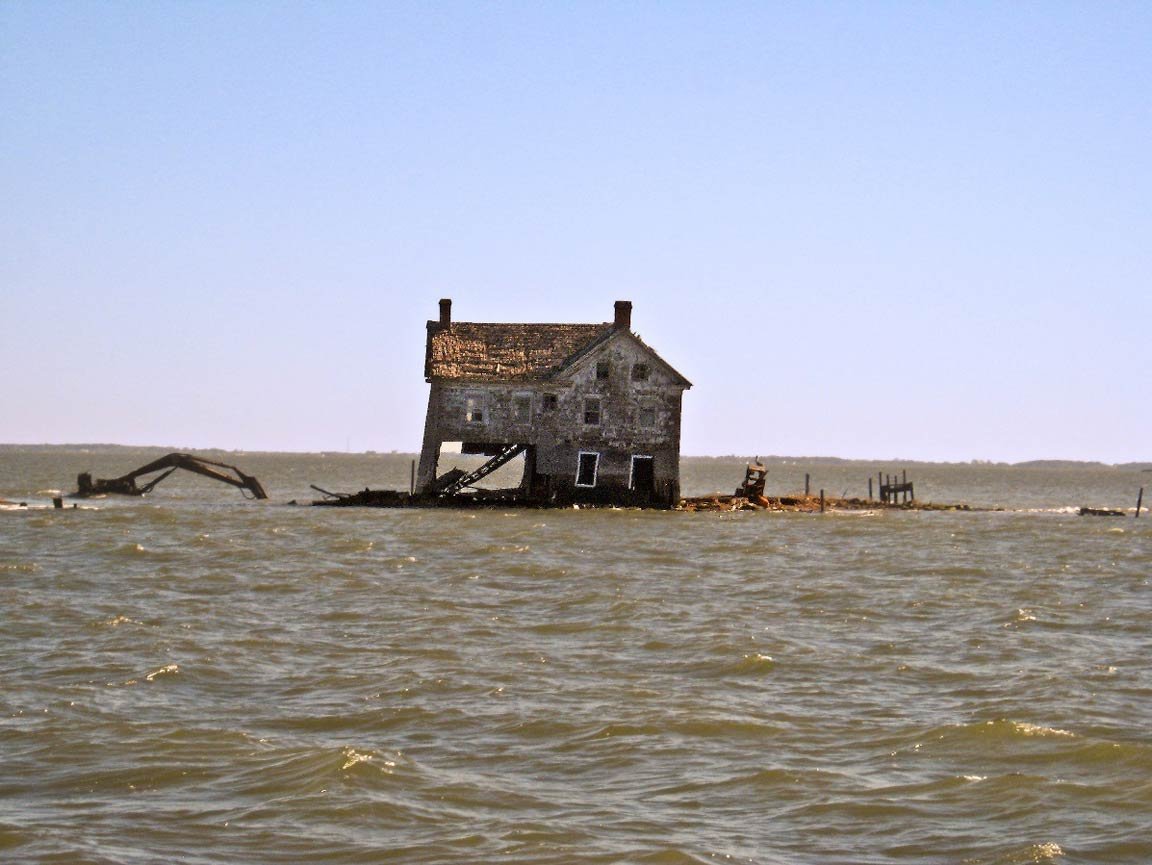 In mid-October of 2010, the house would finally succumb to the elements and fall into a one-story heap.

After 125 years of braving the elements, the Victorian home could stand no more.

Over the next several months the water would re-claim the wreckage; a year later Holland Island was gone.

By 2012 the island had completely eroded. As of the date of this post, Google Maps is still using pre-2011 satellite images allowing us to examine what was left of the house and Holland Island before they disappeared. 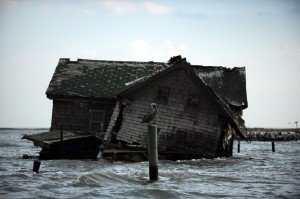 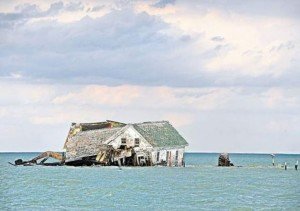 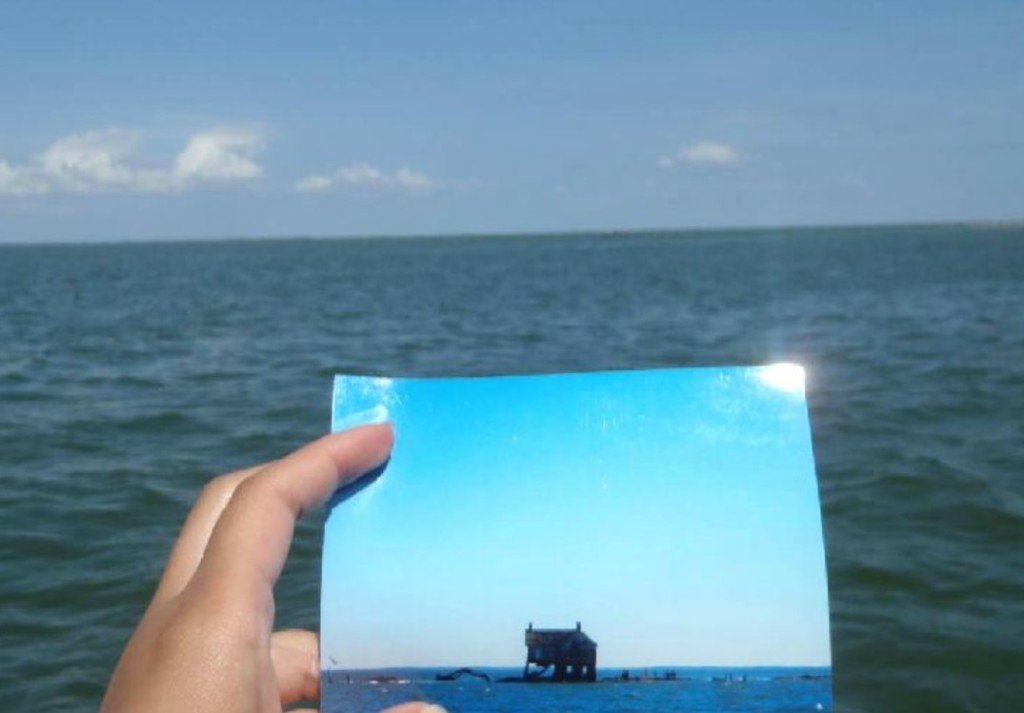