Perhaps one of the biggest unsolved mysteries of American History is the fate of the English colony settled at Roanoke. Originally financed and organized by Sir Walter Raleigh, the attempts to colonize Roanoke failed and ultimately earned Roanoke the nickname “The Lost Colony.” 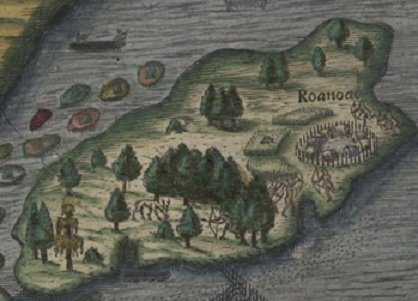 Grenville and his men settled a colony on the North end of Roanoke Island. Once settled, they began to integrate with their surroundings. Relationships with some Native American tribes soured when a native was accused of stealing a cup from the settlement. Tensions between the natives and the settlers remained high through the fall. Grenville decided he must return to England for more supplies, so he left Ralph Lane in charge of 107 men with a promise he would return in April of 1586.

April came and went, and no relief fleet from Grenville was in sight. Soon after, the natives attacked the newly settled colony but the colonists were able to repel the attackers. Sir Francis Drake stopped by on his way home from the Caribbean and offered to take the colonists back to England; having no sign or word from Grenville, they accepted. Grenville returned not long after to find the colony abandoned. He left a small detachment of men to maintain an English presence and returned to England.

In 1587, Sir Walter Raleigh dispatched another group of 150 colonists to the New World. Their mission was to meet up with Grenville’s old garrison and establish a colony on Chesapeake Bay. When they arrived on July 22nd, 1587, they found nothing but a skeleton. Led by John White, they had little choice but to try and re-establish communications with the local tribes that the previous colony had battled a year earlier. During this time the first English child was born in the Americas – Virginia Dare – granddaughter of John White.

The local Croatan population would accept John White and his people; however the other hostile tribes would not. Tensions led to another colonist murdered by a native, this time while crabbing. Again fearing for their lives, the colonists urged White to return to England to ask for assistance. So in late 1587, White set sail for England.

Unfortunately for John White, the Spanish Armada had tied up all of England’s available ships to fight so a return trip to Roanoke was not possible until the spring of 1588. By this time White was able to hire two smaller ships deemed unnecessary to fight the Spanish, but these ships were captured and their cargo seized while en route to Roanoke.

Due to the war with the Spanish, White was unable to mount a return expedition to Roanoke for three more years. Finally, White was able to make his way to Roanoke on a private expedition in August of 1590 to find the settlement completely deserted. His men could not find any trace of the 118 colonists left there three years earlier. The only clue his men could find was the word “Croatoan” carved into a post of the fort and the word “Cro” carved into a nearby tree. 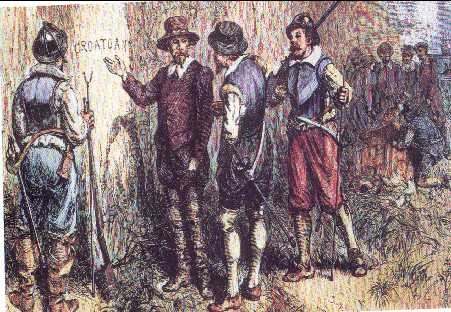 All of the structures from the colony had been dismantled, suggesting that the departure of the colonists was not hurried. The lack of bodies or burial grounds seemed to indicate there was no battle, either. With no sign of the settlers and with the weather turning from bad to worse, White and his men decided to head back to England.

It would be twelve more years before Sir Walter Raleigh would be able to launch another expedition to find out what happened to his failed colony. Unfortunately his 1602 expedition to Roanoke failed as the ships were distracted by privateering and were met with poor weather before even reaching Roanoke.

No further attempts were made to colonize Roanoke after Raleigh was later arrested by King James I for treason.

What happened at Roanoke?

The most popular hypothesis is the colonists dispersed and integrated with various local native Indian tribes. Supporting this hypothesis is some findings from 1607 Jamestown settlers, who claimed to have met Indians who possessed modern English building methods.

Jamestown settlers talked of Indians with two-story houses with stone walls and sightings of European captives at Indian camps. In the early eighteenth century, Croatans living on Hatteras Island claimed they used to live on Roanoke and were descendants from the English colony. Their version of events – although cloudy from being passed down by generations – is the colony was forced to disperse due to food shortages and constant fights with hostile Indian tribes.

Some of the colonists were rumored to have joined the Tuscaroras tribe, a version of events believed by many historians since the Jamestown settlers reported seeing Tuscarorans with gray eyes not long after the Roanoke colony disappeared.

Another theory has the colonists completely moving the settlement due to famine. Believing the land was not fertile enough to sustain farming activities, some hypothesize that the leaders of the colony orchestrated a move and that the colony was later destroyed by hostile Indians elsewhere. When Captain John Smith and the Jamestown colonists settled in Virginia in 1607, an Indian Chief – Chief Powhatan – told Captain Smith that he had wiped out the Roanoke settlers because they were allied with the Chesepian, a tribe that had refused to join the Powhatan Confederacy.

Yet another story has the settlers attempting to return to England on their own and perishing in the attempt.  Another has the colony turning to cannibalism in the face of famine, and yet another has the Spanish destroying the colony since they had destroyed some French colonies not far away prior to the disappearance of Roanoke.

What happened to the colonists at Roanoke? Which theory is the most probable?