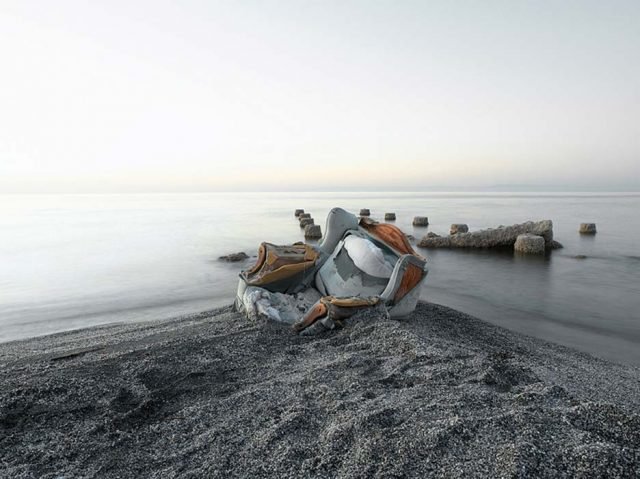 In 1904 there was no Salton Sea. The Salton sink occupied the vast expanse of land 40 miles south of Palm Springs, California with an elevation 226 feet below sea level. The Salton trough was formed by the stretching and sinking of the San Andreas Fault, on which the Salton sink sits. A flood in 1905 saw the Colorado River pour into the sink, and by the time authorities managed to stop the flooding two years later, the largest lake in California had already formed.

Fifty years later the Salton Sea would be seen as the American Riviera, one of the more popular destinations in California. But today, the lakeside communities sit in ruin and most are largely abandoned. Boarded-up houses and beach clubs litter the landscape. Along the coast, what looks like sand is actually crushed and rounded bones from millions of fish skeletons. 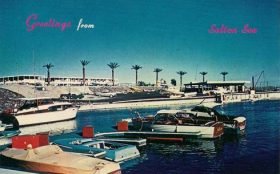 At the turn of the twentieth century, the California Development Company began constructing irrigation canals around the Colorado River to divert water to the Salton Sink dry lake bed. For a time Salton Sink was fertile land for farmers, however this was short lived when heavy rainfall and snow melt in 1905 caused the Colorado to flood.

The ensuing flood breached a dike and for two years dumped the contents of the Colorado River into the Salton Sink. The massive influx of water and lack of drainage resulted in the formation of the Salton Sea.

It is worth mentioning the Hoover Dam was constructed in the early 1930s to put an end to the flooding of the Imperial Valley.

The lake is approximately 15 miles wide and 35 miles long, with a maximum depth of 52 feet. In the 1950s the Salton area experienced its boom with Salton City, Salton Sea Beach, and Desert Shores communities being constructed on the western side while Desert Beach, North Shore, and the Bombay Beach towns were established on the eastern shore.

People from all over the country flocked to the Salton Sea, “the Riviera of the West” as it was dubbed – a popular stop for the stars with nearly 80 miles of coastline. Salton City was the crown jewel of the Sea, a resort town that enjoyed a boom into the 1960’s. 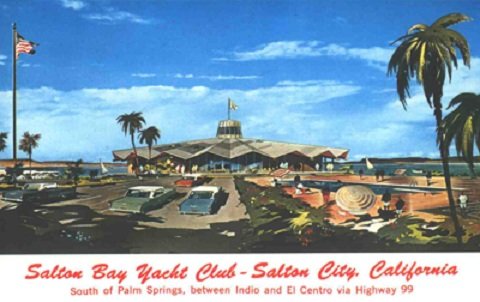 This was not to last, however, as deteriorating environmental conditions started making it difficult to live in Salton. The lack of lake outflows prevented the ecosystem from refreshing itself, allowing everything to stagnate.

What’s more, the various inflows from nearby rivers bring in agricultural runoff and sewage. The New River sends toxic waste North from the Mexican city of Mexicali into the Salton Sea. Steadily increasing levels of toxins, algae, and bacteria have been observed in the Salton Sea over the years. 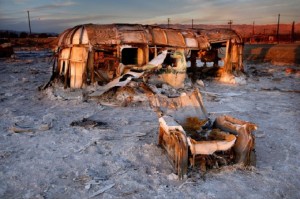 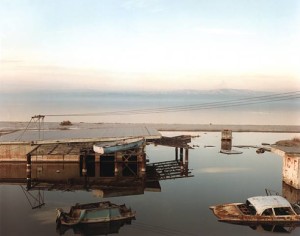 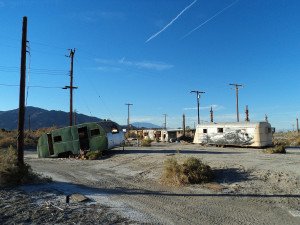 The Salton Sea is probably best known for its high salinity levels: at about 44 g/L, its salinity is 25% higher than that of the Pacific Ocean – and those levels increase 1% a year. Those most affected were the fish; fertilizer runoffs upstream combined with algal blooms elevated bacteria levels, making the water inhospitable to most marine life.

The ever-increasing salinity levels create a toxic environment for sea life. Only tilapia have shown an ability to cope with the increased salinity and bacteria. 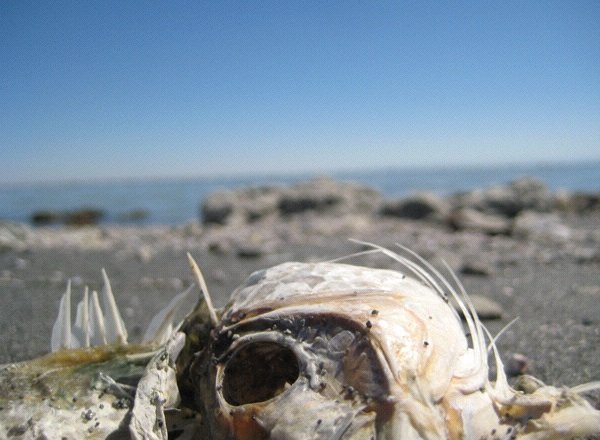 Over the years the fish would die off en masse, one of the largest being in 1999 when 7.6 million dead fish littered the shores of the Salton Sea.

Visitors spoke of the stench of rotting fish in 110 degree heat and the abundance of flies that are attracted to the dead fish.

What looked like sand on the shores of the Salton Sea was really the crushed bones of millions of dead fish.

On the hottest of days, it is said you can smell the live fish from outside the water.

If that wasn’t enough frustration for visitors, the ever-changing coastlines were also a problem. Flooding in the 1970s buried beachfront properties in salted mud, and due to limited inflows, the shoreline is receding by about 7 inches per year.

Perhaps even more alarming is the fact that inflows from the nearby agricultural developments will terminate altogether in 2018 when a water transfer agreement approved by the state expires. At that point, experts suggest the coastline could begin to recede even more rapidly.

Exacerbating the problem is the fat that the Imperial Irrigation District is asking the state for permission to allow it to stop sending water to the sea even sooner, before 2018. 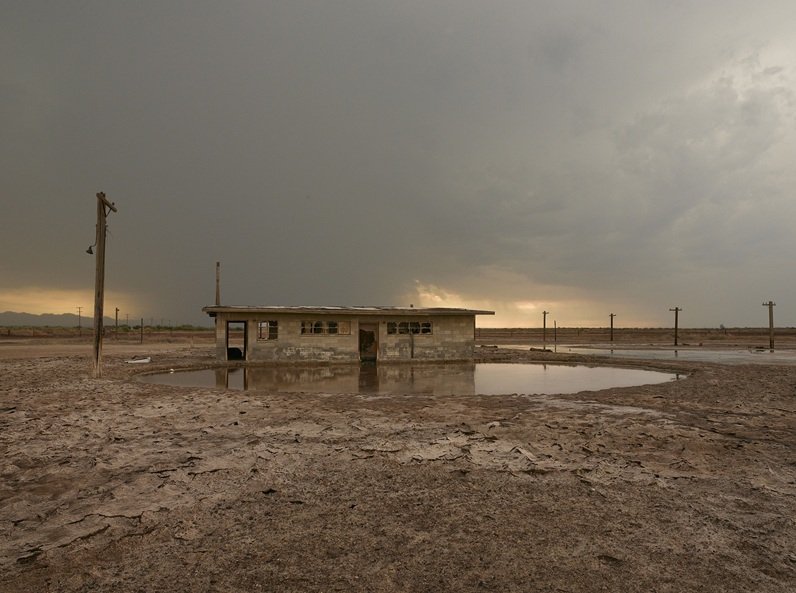 Today, Salton City sits as a grim reminder of a failed resort destination. Entire blocks of streets sit completely empty, but labeled with street signs for neighborhoods that never were.

Waterfront homes built 50 years ago sit boarded up, half buried in mud. Trailers sit as skeletons, stripped of their shine by years of salt and sun exposure. 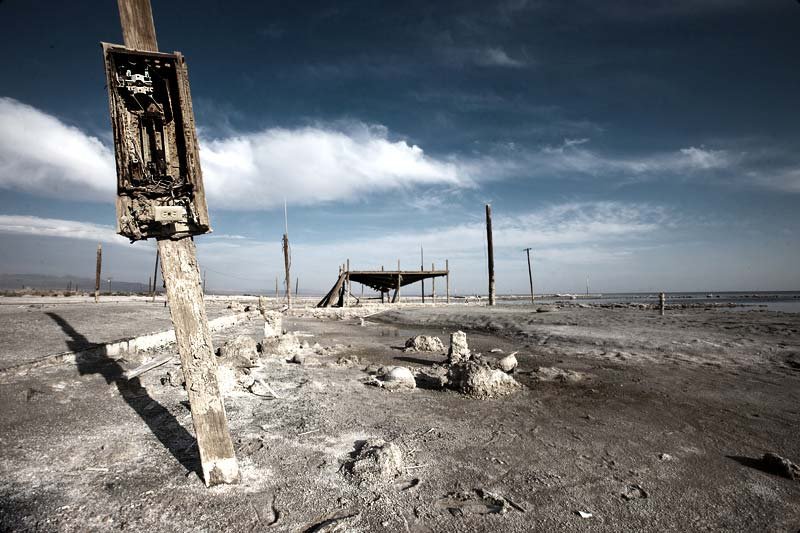 Despite all this, there are some positives for the region. Over 400 species of birds have been documented at Salton Sea, sometimes called “a crown jewel of avian biodiversity.” The region supports 30% of the remaining population of the American white pelican and it is a resting stop on the Pacific Flyway.

In addition, the lake still has an allure to outdoorsmen, kayaks, and fishermen after Tilapia. Most of the surrounding communities still harbor a modicum of year-round residents, although it is said the numbers are so small one can wander around Salton City on a given day and not see another person. 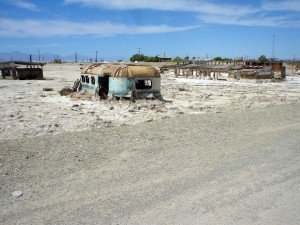 Despite the environmental concerns and issues surrounding the region, many have tried over the years to revitalize the area and create the idyllic resort once again.

Most recently, government officials approved plans for a town that would contain over 16,000 homes, support 40,000 people, and have enough businesses and jobs to support the residents.

The town is to be developed by Federated Insurance and called Travertine Point, but it would be more than 20 miles away from any other town. Developers admit ground breaking won’t happen for three years, and the entire plan will take decades to unfold. Unfortunately, the obstacles in front of this dream are the same that doomed Salton City, Bombay Beach, and the other communities around the Salton Sea. 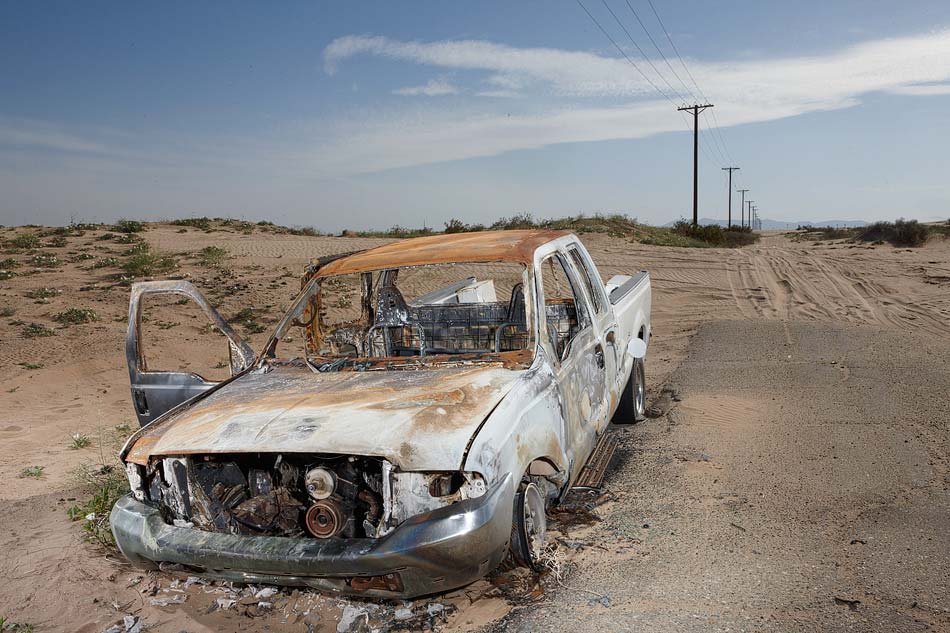 If this story interests you, we recommend this video by Ransom Riggs; it is a very well-done short film with numerous pictures and from Salton City and was an inspiration for this article: