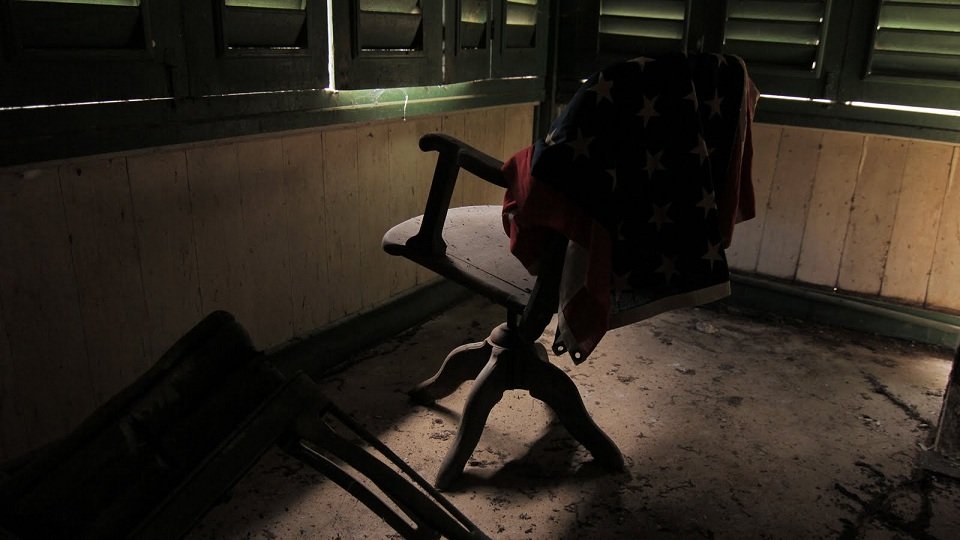 Henry Ford was a mastermind of efficiency. It wasn’t so much what he invented, it was how he made things better. His successes in streamlining auto production and the small foray into air travel gave him a well-deserved confidence. That confidence would prove to be his undoing in Brazil, where his company town start up – named Fordlândia – failed to yield the vast amounts of rubber he had expected.

His cars needed tires, and in the interest of lowering costs Ford planned to build his own rubber production plant in the Amazon. Henry did little research into the area’s culture and instead relied on his inclinations to pick a location, hire a workforce, and establish rules for the town. Unfortunately Ford was not a Brazilian, geologist, nor a qualified mayor.

Six years and 200 million dollars later, Ford finally closed the town with nothing to show for it. Fordlândia was such a flop it was arguably the most expensive mistake of Henry Ford’s career.

The Asian rubber importers of the Far East had a monopoly on the rubber industry; Henry had no leverage in negotiations and he was tired of their strong-arm business tactics.

Ford witnessed British rubber companies take Amazonian rubber trees to Asia, and through building massive rubber farms, enjoy much success. In true Ford fashion, he decided if he could not score a deal on purchasing rubber – he would make it himself.

The Amazon rain forest in Brazil was an ideal climate for rubber tree growth, and for Henry the inexpensive cost of land would seal the deal. The Brazilians weren’t keen to sell mass acreage to a foreigner, however, so a deal was struck that the Brazilian government would receive nine percent of profits generated from the plant. 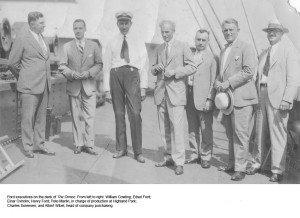 In exchange for this the Brazilian government agreed to sell Ford 2.5 million acres of land along the banks of the Rio Tapajos in the Amazon.

As an added incentive, Brazil even offered regional expert Mr. Villares to assist Mr. Ford with choosing a specific location.

In 1927 a deal was struck and the ground-breaking began.

Henry Ford wanted to establish a utopia in the Amazon. The location was remote but he wanted his workers to have every amenity available. He had a concept for an Americanized town with every luxury workers could dream of but did not have. Ford built nice new tract housing for the workers, a pool, tennis courts, and even a golf course. He also built a hospital, library, and hotel. As the town grew, bakeries, butchers, and restaurants were established.

The major incentive for workers was the wages. They were offered 37 cents a day, nearly twice the typical wages of the time. This would attract a vast workforce quickly; at its peak in 1930, Fordlândia had nearly 10,000 residents. 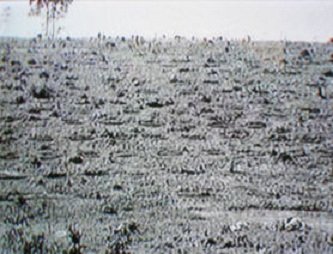 Unfortunately Mr. Ford failed to consult with botanists or geologists when he planned the town. The land he purchased was rocky terrain on the side of a mountain and the rubber trees were not growing.

The British rubber exporters had taken Amazon rubber trees and planted them with much success in far east Asia, and it was for good reason. Land in Asia proved plentiful and more fertile; trees were able to be properly planted farther apart. It was necessary to allow the trees plenty of room to root as a defense against tree blight.

Henry also discovered South America had predatory insects that destroy rubber trees, another obstacle the rubber exporters in Asia didn’t have to deal with. Back in Fordlândia, Ford had planted thousands of rubber trees on crowded rocky hillsides. Henry thought planting more trees would yield a larger amount of rubber.

Unfortunately this was not the case; tree blight and insects destroyed whatever they could grow (above, right). Ford was undeterred by the first few rounds of failures, and spent more money planting additional trees every year.

Ironically this would only exacerbate the problem; the proximity of the trees to each other would create a perfect incubator for predatory insects and disease. Not realizing this, Ford continued to order more of the rocky Amazon landscape to be stripped and planted every year (below). 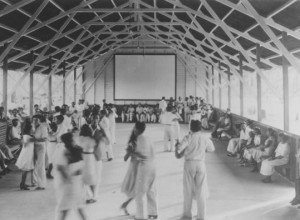 If the rubber tree struggles weren’t enough, the town was also an enormous failure as a social experiment. Henry Ford assumed the poverty-stricken native tribes wanted American-style houses and luxuries common to the United States.

Henry Ford tried to instill American ideals and culture to the native workforce, and the ensuing culture shock was a disaster.

Residents were forced to live a mandatory ‘healthy American’ lifestyle to include attending poetry readings, square dances, and English-only sing alongs. Workers were required to wear identification badges at all times.

By far, the rule that drew the most ire from the natives was ‘no alcohol.’ Ford was adamant in his prohibition stance; the rule said no alcohol was allowed anywhere within the town limits – not even in the workers’ homes.

Ford only served American foods in the cafeterias and restaurants. Workers could only eat American staples such as hamburgers, hot dogs, pizza and pasta.

While this would have appealed to the average American, the native workers were not accustomed to this diet and it was not well-received. Workers caught sneaking native dishes were either docked pay or fired.

Despite the town having a hospital, illness and death in Fordlândia were common. Diseases such as malaria would sweep through the town faster than health officials could treat it, and there was little doctors in town could do to help workers in the fields who encountered poisonous bugs and snakes. Those lucky enough to avoid disease and insect-borne illnesses fought with digestive issues from the change in diet. 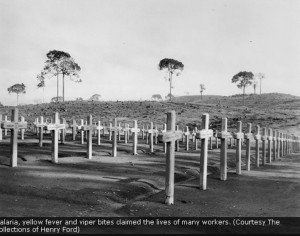 Henry Ford also instituted American work hours, which was not common at the time in Brazil. It was tradition for the culture to break in the middle of the day when temperatures were most extreme, instead doing the work early in the morning and late in the evening.

Henry Ford’s new ‘9 to 5’ policy was not popular, nor were his foreign assembly-line production methods. Shift desertion was common and by 1930 workers had started rioting, over-turning cars and throwing materials into the river. 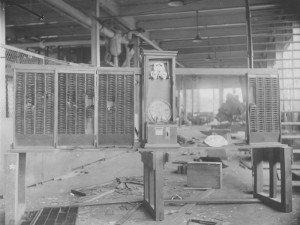 Despite the perks of working in Fordlândia, to the natives the restrictions and culture differences ended up proving not worth the trouble. The problem worsened with the tension; the more workers would resist, the more management would push back.

Eventually the workers could stand no more. The rioting became so fierce, the American managers fled the town and the Brazilian military had to restore order. 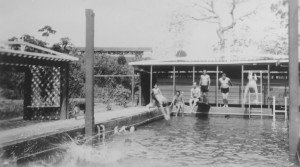 Despite the growing social disorder, Henry was focused on the lack of production. By 1933 he acknowledged the poor location for cultivating rubber trees and relocated downstream to a new town he named Belterra.

The new town was more attractive for the growth of rubber trees. It had flat, fertile lands and a more visually appealing landscape.

Fordlândia pool: then (above) and now (below)


In Belterra the growth of rubber trees proved to be better but it was still not enough to justify Henry Ford’s investment; it took ten years for Belterra to establish itself as a quantifiable rubber producer.

By 1945, synthetic rubber had been developed negating the need for large rubber plantations. Just like that, Ford’s investment was rendered obsolete. In 1945, Henry Ford II sold the Fordlândia property back to the Brazilian government for $250,000 ($200M in 2011 dollars).

For all that money and trouble, not a single ounce of rubber from Ford’s Brazil operations ever made its way onto a Ford car. And, despite being so hands-on with the governance of the town, Henry Ford never actually visited Fordlândia. He had plenty of opportunity but declined numerous invitations from the residents and managers.

Henry Ford wasn’t just a visionary; he was also a man of ego and was not known to admit defeat. Toward the end of the Fordlândia experiment, Ford proclaimed the town to have been a “successful sociological experiment.”

He claimed his intent wasn’t just to cultivate rubber, but to “cultivate workers and human beings.”

Cynics have speculated the Brazilian government was very aware of how poor the landscape would be for growing rubber trees. Either due to Brazil’s mistrust of foreign investors or the opportunity to make easy money, Henry Ford was not warned. Adding to this suspicion was the later discovery that Villares – the adviser Brazil assigned to Mr. Ford in the beginning – was also the owner of the rocky land sold to Mr. Ford. This was an obvious conflict of interest and didn’t do anything to remove suspicion of impropriety. 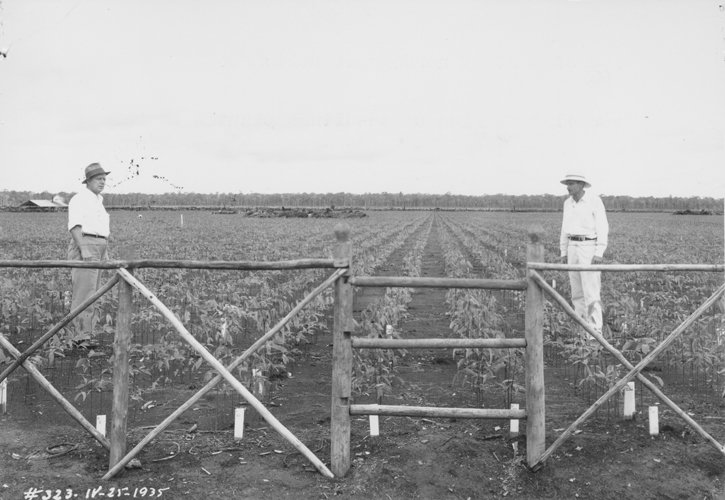 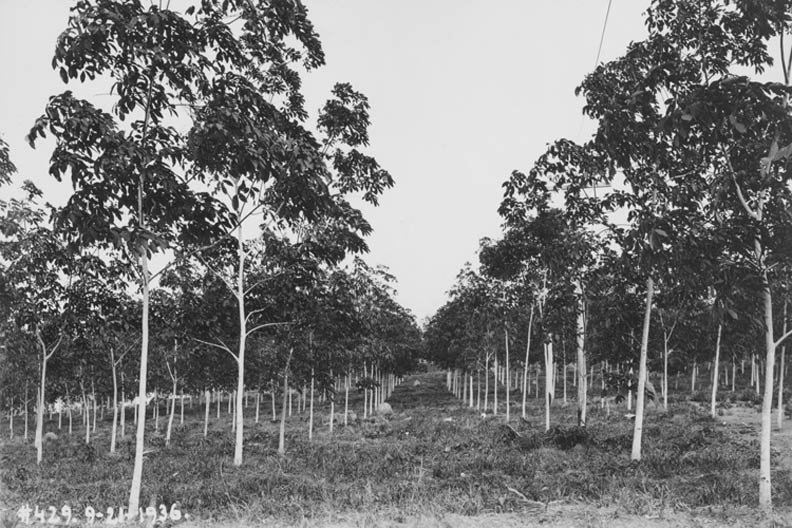 The factories, buildings, and homes were so advanced and luxurious for the time that Brazil wanted to find a way to make use of them. Unfortunately multiple attempts to re-purpose and use the town have failed; the area would ultimately prove too remote to be of use.

Today most of Fordlândia and Belterra’s structures remain, although by now all are rather dilapidated and covered with heavy overgrowth. The only residents left are squatters and amateur farmers.