Skip to content
HomeAbandonedLargest Abandoned Factory in the World: The Packard Factory, Detroit

Packard was a premier nameplate in the United States, mentioned in the same breath as Duesenberg, Cadillac, Pierce-Arrow, and Lincoln. The crown jewel for Packard was the Packard Factory, a 3.5 million square-foot complex sprawling across 35 acres.

In the years following World War II, the Packard Motor Car Company struggled to keep pace with the larger automakers that had purchased smaller companies to form “the Big Three.”

Those not part of the Big Three had to merge to stay competitive: Kaiser and Willys formed Kaiser-Willys, Nash and Hudson formed American Motors, and Packard joined forces with Studebaker. The experiment was short-lived, however, and Packard ceased to exist by the middle of the twentieth century.

During the 1950’s Packard endured an economic roller coaster, from being a premier auto manufacturer outselling Cadillac, to closing its doors within a decade.

Entrance to the Packard factory: then and today

By 1957 Packards were no longer assembled at the Detroit plant. For the next two years a handful of Studebaker models continued to wear the Packard badge, but by the turn of the decade Studebaker began to pull the Packard nameplate from its models. In the early 1960s, Studebaker dropped the Packard name altogether.

Studebaker would also meet its demise several years later, believed to have survived longer due to the lower-price/higher-volume sales model.

Upon liquidation, the remaining pre-war Packard designs and tooling were sold to parties around the world. For decades Packard clones would continue to be built in Russia under the ZIL and ZIM nameplates, catering to the Communist elite. Post-war Packard designs in the Soviet Union lasted well into the 1970s.

The Packard name would survive. General Motors’ electrics division – later known as Delphi – was originally Packard Electric when the auto manufacturer purchased it in 1932.

The company was later renamed Delphi Packard Electric Systems, and coincidentally would be the only profitable division within parent company Delphi during the late 2000’s.

Designed by Albert Kahn and opened in 1903, the factory was world-class in its day. The Packard factory occupied 3.5 million square feet of interior space across 47 buildings. It employed over 40,000 skilled workers on a campus that spanned 35 acres.

The facility was the most modern plant of its time, and the first to use reinforced concrete in industrial construction.

hand assembly on the floor

Packards in showroom circa 1950s

The plant was closed in 1956, leaving the factory vacant. The city lacked options; finding another tenant for the 3.5 million square-feet of space would be a difficult task.

Administrators considered parceling the factory into multiple lots, but a lack of interest stalled the proposal.

One tenant other than Packard has occupied the factory long-term: Chemical Processing Company moved into a small part of the factory in 1958.

Chemical Processing would move operations in 2007, and ironically occupied the factory longer than Packard itself.

The owner of the business admitted part of the reason for his move in 2007 was due to vandals and break-ins around the factory.

Not realizing a business is still in operation, scavengers would often break-in to scavenge scrap materials; vandals damage buildings and accelerate the plant’s deterioration.

Several investor groups have proposed ideas for the plant, but to date none have been able to come to the table with money and get approval from the city to execute plans.

For decades the city offered the land for sale, however there were no suitors.

The most recent ownership group hadn’t paid property taxes since 1987. 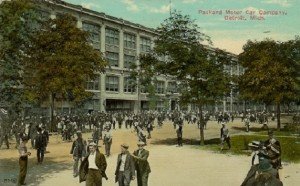 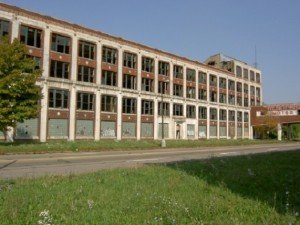 As of mid-2011, the Packard Factory stands as the largest abandoned industrial complex in the world. 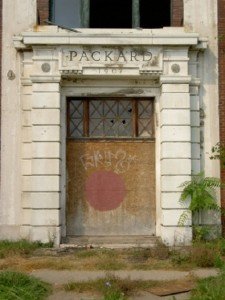 Below: In better times.