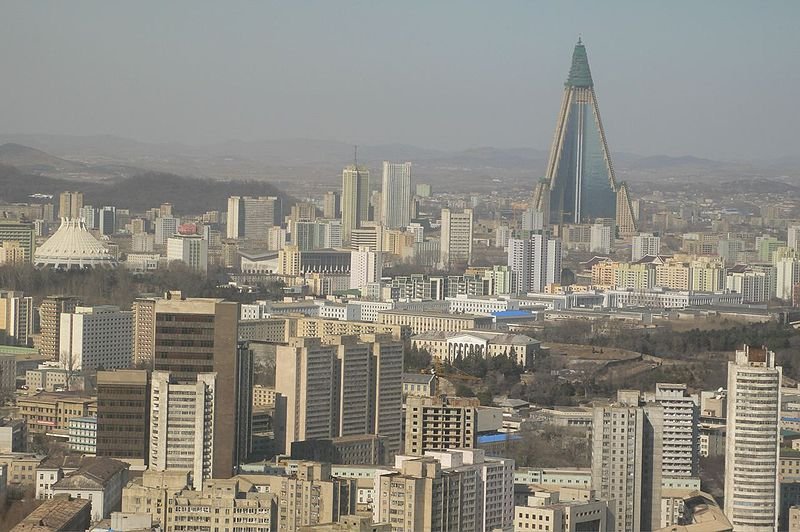 North Korea has not historically been known for progress or leading the world in anything. In the mid-1980s they wanted to change that perception by building something massive, something that would be world-renowned. The project would symbolize progress for North Korea and introduce new, Western investors. The government decided to build a hotel – taller than any in the world  – and in 1987 construction on the Ryugyong Hotel began.

It was intended to be completed in 1989 in time for the 13th World Festival of Youth and Students, but developers would face nearly every conceivable hurdle and by 1992 the project was abandoned.

The North Korean economy had been bleak for decades. The Korean conflict had taken its financial toll on the North and the ruthless socialist regime allowed not for capitalist endeavors. North Korea had little in the way of engineering pride and wanted to build something magnificent to showcase Pyongyang on the world stage.

In an effort to attract Western dollars, North Koreans drew up plans for a 105-floor hotel – to be the largest in the world – and promised a complete laissez-faire attitude with oversight of the construction and planned hotel activities. Casinos, nightclubs, and fancy restaurants were encouraged. When the project was planned, it was estimated the cost to build the “largest hotel in the world” would be around $230 million.

The original design for the Ryugyong Hotel 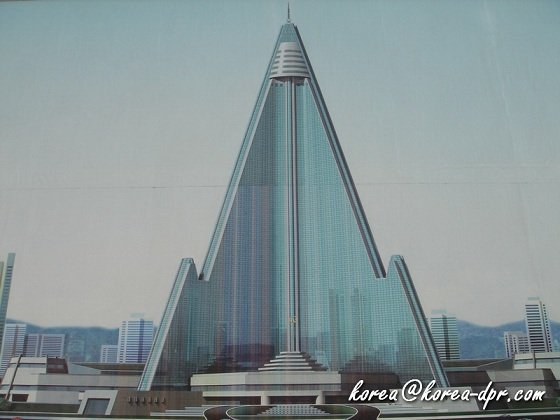 The early 1990s saw North Korea enduring food and electricity shortages, and the government was broke. Foreign investors had been wary of the North Korean promises and financiers had been backing out with every delay.

The building had finally reached its full architectural height by 1992, but a broke government and a lack of foreign investors meant the project would be abandoned before completion. Had the hotel been finished as originally planned, it would have stood as the tallest hotel and the seventh-tallest building in the world.

In fact, the unfinished Ryugyong was not surpassed in height by another hotel until 2009.

For the next 16 years, the unfinished building sat vacant without windows, fixtures, or furnishings. The landscape of Pyongyang was dominated by a massive concrete monolith with an abandoned rusting construction crane at the top.

North Korean officials were embarrassed of the project, which the public now considered an enormous blunder. The government edited official city photographs in order to remove the structure from the skyline.

The hotel was removed from all printed maps of Pyongyang and became known as “The Worst Building in the World.” Other common names were “Hotel of Doom” and “the Phantom Hotel.” The level of embarrassment was so great, the North Korean government declined to acknowledge the hotel’s existence for over a decade.

In the late 1990’s there was a brief attempt to re-start the project. An inspection crew from the European Union was flown to Pyongyang to examine the hotel, and it was determined that the structure was irreparable.

The predominant concerns from the report were quality issues with the concrete used and the elevator shafts were said to not be aligned properly.

In 2008 there was a third attempt at reviving the project. Orascom Group, an Egyptian telecommunications and contractor conglomerate, signed a $400M deal with the North Korean government to build and run a 3G mobile phone network in the country. Coincidentally, Orascom began working on the Ryugyong Hotel at the same time.

The full level of Orascom’s involvement is unknown, but word has leaked Orascom is not completing construction but merely reinforcing the structure and shoring up the façade. Visible upgrades performed by Orascom include exterior glass panels and some telecom antennas. Orascom does not release details regarding the project either; in fact the public is still left wondering if this latest contractor was indeed paid to finish the project or just make it look pretty. 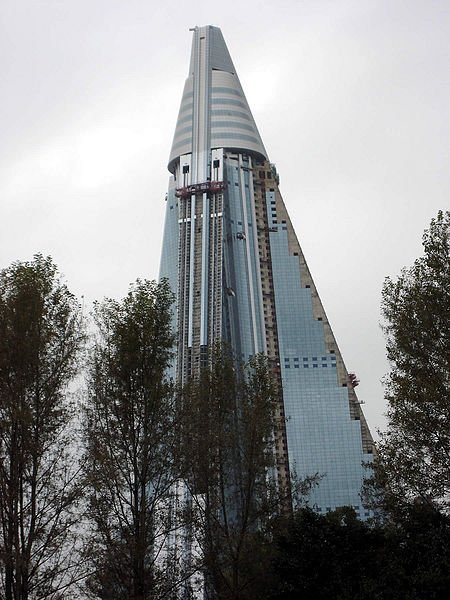 Some of the construction workers told the press that despite the nice façade, the 3,000+ rooms, offices, restaurants, and banquet halls all remain hollow concrete shells.

North Korean officials proudly declare the Ryugyong Hotel will be completed in 2012 to coincide with the 100th anniversary of the birth of “Eternal President” Kim II-sung, but those involved with the project estimate that this is a very optimistic estimation.

The exterior of the structure is due to be finished this year, and the interior has yet to even be addressed, leading some to speculate that the government might just be dressing up the structure without actually intending to “open” it. 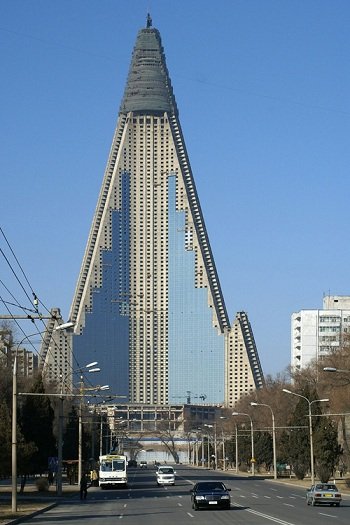 The hotel is a 1,080 foot-tall (330m) pyramid design with 3 wings, each 330 feet long. Each wing is 60 feet wide and is sloped at a 75-degree angle. The top of the structure is a 14-floor cone with 8 floors intended to rotate beneath 6 static floors at the top. The revolving section was intended to house five revolving restaurants and several nightclubs.

Truly a magnificent design, the hotel would have been a world’s attraction had it been completed in 1989. In fact it was the first building constructed outside of New York or Chicago that had more than 100 floors. However in the years since, Dubai has grabbed the world’s headlines for large hotels.

The Ryugyong Hotel could have been a breakthrough for the North Korean people and a source of national pride. Instead it stands as a black eye, reminding citizens what happens when a poor communist country has delusions of grandeur on the capitalist world’s stage.

In a country where the average worker salary is about $47 per month, the citizens of North Korea would surely have rather seen that $750 million spent on infrastructure, jobs, and quality of life improvements.