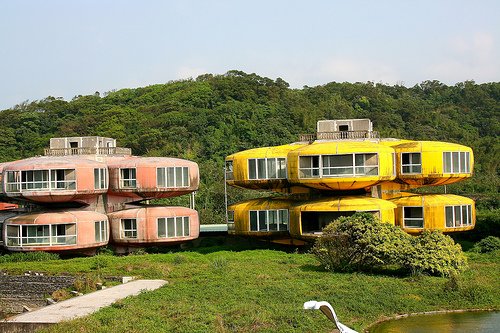 Sanzhi might look like an outcropping of structures from an episode of Star Trek, but the site is actually home to the remains of an abandoned tourist destination resort in the north of Taiwan.

The concept behind Sanzhi was futuristic pods that would function as summer villas for the affluent who wanted retreats from the city.

San Zhi was an idea that was well received and even gained financial backing from the government. Construction began in 1978, but investment capital dried up in 1980 before the project was completed.

The company went bankrupt and the project was abandoned, leaving the mostly-finished property to rot.

There is much speculation and legend associated with what caused the now abandoned resort Sanzhi to fail.  The most common reasons suggested were a combination of poor financial prospects combined with intense regional superstition.

Workers have cited a number of fatal accidents during construction, some so severe it forced the contractor to temporarily stop construction.

As the number of fatalities increased, the government’s support of the project waned until it would ultimately discontinue subsidizing the project. This lack of funding combined with a high number of fatalities helped grow rapid speculation the land was cursed. Regardless the reason, too many had lost their lives in what should not have been a risky construction project.

Unfortunately, the construction company responsible for the project has destroyed all records – possibly in an attempt to remove any evidence or proof of culpability.

Since all records have been destroyed, details of the fatal accidents – and even the architect of the project’s name – are things we may never know.

In 2011, the still abandoned resort Sanzhi sits as it has for decades because it has little redevelopment value. Local legend still seems to suggest this property is cursed. Lore says the spirits of those workers who lost their lives in the fatal construction accidents still roam the abandoned resort Sanzhi as well.  If it wasn’t cursed before, it surely is now.

Will this project ever be finished or the land developed?  By the late 2000’s, the Taiwanese government finally decided to tear down the failed resort. Demolition was supposed to have begun in 2008. 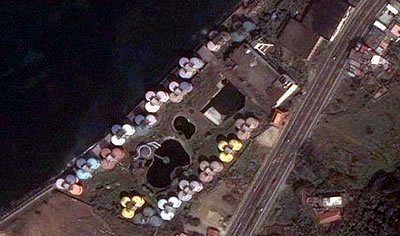 Update 26 March 2014: Thanks to information from reader John Wilkerson, we know the San Zhi resort has been demolished. As of the date of this update, you can still see the resort on Google Maps. However Bing Maps does indicate the land has been cleared.