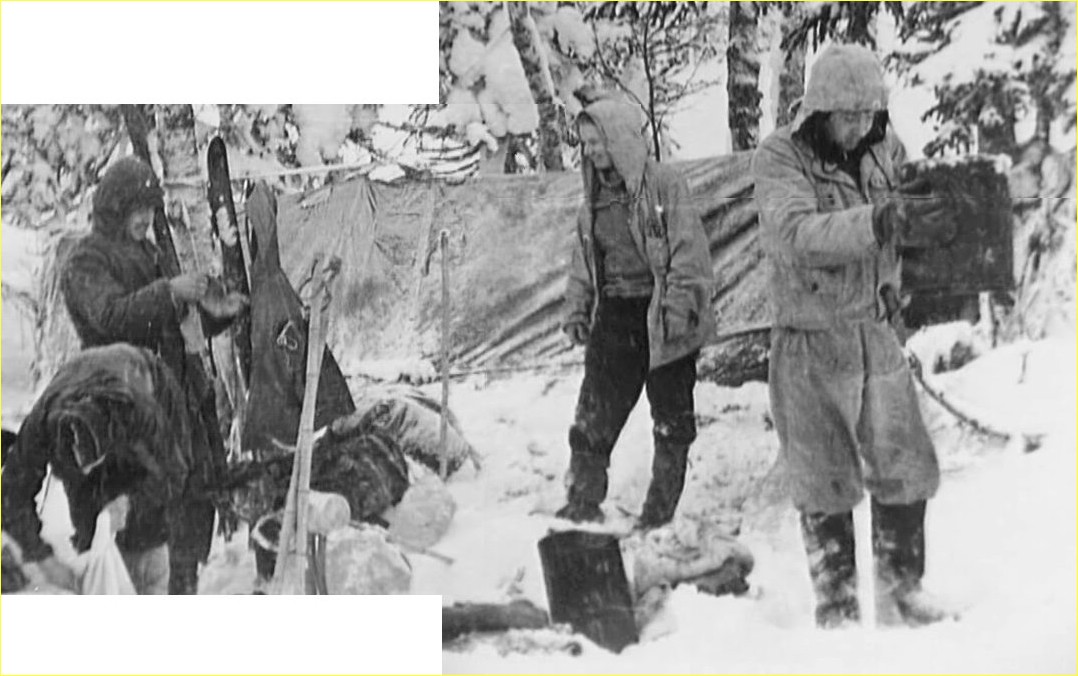 On January 27th 1959, a group of nine skiers set off hiking in the northern Ural Mountains. The group was formed of graduate students from a nearby University for a ski trek across the Sverdlovsk Oblast.

The students were all experienced hikers and seasoned skiers, and the route was rated as a “Category III” – the most difficult. The trip began rather uneventful, but by February 2nd they would all be dead with no witnesses or explanation. 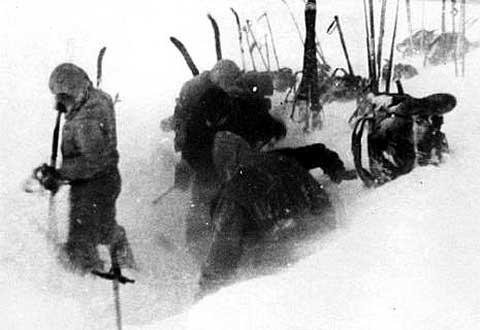 Igor Dyatlov, the group’s leader (pictured at left), realized on February 1st the group had lost their direction and deviated off course. Instead of heading up to the mountain of Otorten, they were on Kholat Syakhl. Deteriorating weather conditions forced the group to stop and set up camp for the night before turning back.

What they didn’t know was the group would never turn back. Friends and relatives expected the group to return on February 12th, but the Dyatlov party never returned. By February 20th search parties were organized that included the police and military. Finally after six days of searching, authorities found the Dyatlov camp.

The tent was torn from the inside and the campsite was abandoned. Searchers followed the recent footprints which led to the edge of the forest where they discovered the remains of a fire and two dead bodies. The bodies were found shoeless and only wearing their underwear.

Nearby the search party discovered three more bodies spaced about 150 meters apart; it appeared as if each had been trying to return to camp at the time of their respective deaths. It wasn’t until two months later authorities would find the remaining four bodies in a nearby ravine under four meters of snow; quite a bit further from the camp than the other bodies.

Initially investigators assumed the group perished from hypothermia and exposure to such extreme temperatures. Several factors didn’t seem to mesh well with this theory, however. For starters the deceased were found nearly naked, wearing only underwear and shoes in weather that was nearly 22 degrees below zero. Two of the hikers had skull damage, two had major chest fractures, and one woman was missing her tongue.

The medical examiner indicated the force required to cause such fractures to the skulls and chest would have been extremely high; he likened it to the force of a car crash. Yet the victims mysteriously had no visible external wounds or injuries. There were no foreign footprints and there was no sign of a struggle, although the medical examiner did report some of the victims might have been blinded prior to their death.

Possibly the most confusing piece of evidence was some of the victims were wearing each others’ clothes.

What the medical examiner ultimately determined was six of the group members had died of hypothermia and three of fatal injuries. All perished about six to eight hours after their last meal. Authorities said there were no indications of other persons nearby and that the tent was ripped open from within. They also indicated that forensic radiation tests had shown high doses of radioactive contamination on the clothes of some of the victims.

The final determination from the medical examiner was the group members had each died due to “a compelling unknown force.”

A legal inquiry followed, along with quite a bit of controversy. Relatives of the deceased claimed the victims had a strange orange color to the skin and gray hair. One of the rescue workers acknowledged his radiation equipment had shown very high levels of radiation around Kholat Syakhl, however the source of this radiation was not disclosed.

A group of hikers 50 km south of the Dyatlov group reported they saw strange orange spheres in the night sky to the north. Similar spheres were reported in adjacent areas continually between February and March by various independent witnesses. There were also reports of large deposits of scrap metal in the area, leading to speculation of a secret military cover-up.

There are certainly a fair number of theories. Unfortunately most of the case files and notes from the investigation were limited both by Russian oversight of the media and poor record-keeping in Cold War-era Russia. The best known case notes belonged to Yuri Yarovoi, a photographer from the original search party. He died in 1980, and all his archives, diaries, and photos have been lost.  Yuri was known to have suspected government cover-up as his personal position, but he kept silent with authorities keen to manage oversight of details of the case.

Some have suggested an avalanche could have disturbed the campsite, but the terrain does not support the consideration of avalanche activity. It also does not explain why half of the group would leave the tent first, followed by the other half later. It does not explain the undisturbed footprints of the victims in the snow or the fact the tent was not buried.

Others have suggested a bear attack, or possibly a local tribe slaughtered the party due to trespassing on forbidden land. The absence of open wounds on any of the victims and lack of additional foot or paw prints (not to mention the lack of evidence of a struggle) would seem to throws some doubt on those theories.

Another suggestion was the hikers stumbled into a secret military testing area, a rumor certainly not quashed when the government engaged in secrecy and cover up.  Fans of this theory are quick to point out the military found the hikers’ tent long before the rescue party and they had every opportunity to remove and alter evidence.

In 1990 the Soviet government opened up what was left of the case files to journalists. Unfortunately this would only pose more questions than it would answer since numbers of pages were missing as were envelopes with field testing reports. Also missing from the evidence collected from the scene were the personal effects left by the Dyatlov party members. Those involved with the original search party seemed to believe the cause was a secret Soviet weapon being tested by the military, although few came out and publicly shared these beliefs until the 1990’s.

As of the date of this article, the case officially remains unsolved. Much of what we know and the pictures we have all came from the diaries and undeveloped rolls of film found at the site. Most of the original case files have long since been lost or destroyed. Those involved with the search party have passed away, leaving no chance for further eyewitness investigation.

The area where the party was found has been renamed “Dyatlov Pass” in honor of the lost party.