In July of 1518 in Strasbourg, France, a woman named Frau Troffea walked into the street and started to dance. She continued to dance on the street for several days, and by the end of the week thirty-four others had joined her. By the end of the month there were around four hundred dancers in the streets. These people danced uncontrollably and in bizarre fashion; shouts, screams, and singing were reported to accompany hallucinations.

Eventually, many would die from heart attack, stroke, or exhaustion. 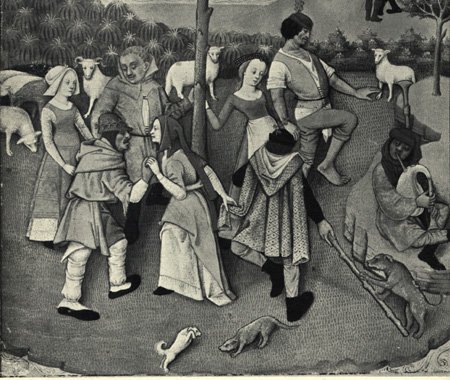 As the number of participating dancers grew, local officials started to worry. For some reason, physicians of the day encouraged more dancing, incorrectly assuming that the afflicted would only heal if they danced continuously night and day. Dance halls were constructed and musicians were paid to play music to keep the afflicted moving. This strategy backfired and if anything encouraged more people to dance.

Dancing mania, also sometimes known as St. Vitus ’ dance in lore, was first recorded in the 7th century and reappeared many times across Europe until about the 17th century. The Strasbourg incident in 1518 is by far the most well-known, although numerous other “outbreaks” – notably the 1374 outbreak in Aachen Germany – are also very familiar to historians as the events were well recorded.

Several theories are suggested as to what caused the dancing mania. Mass Psychogenic Illness (MPI) is a type of hysteria preceded by episodes of distress, and is thought to have been a possible cause due to the high levels of poverty and famine at the time. Yet another theory is the afflicted succumbed to ergotism, which resulted from consuming ergot (a mold) on tainted bread. Consuming ergot has been known to cause seizures, delirium, and hallucinations. It is also known to restrict blood flow to the limbs, however, which would make it rather hard to dance. 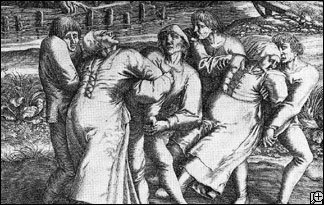 Still, others point to religion or superstition. Saint Vitus’ dance was the term most often assigned to dancing manias of medieval times; Catholic legend says invoking the wrath of Saint Vitus would provoke compulsive dancing. This might just be the most plausible explanation since the dancing plague appeared to die out as the super-naturalist beliefs that fed it gradually disappeared. This theory starts to gain more traction when one notices that as Protestantism spread through the area, the disease eventually disappeared.

Amidst the tragedy of people losing their lives to such a farcical plague, one has to marvel at the unsophisticated approach that humans had toward ailments in medieval times.

They’re called the Dark Ages for a reason.