As of mid-2011, Mount Everest has claimed the lives of over 216 known mountain climbers. The area above 26,000 feet is called “the Death Zone”, where breathing fresh oxygen from canisters is necessary for all but the most experienced climbers.

The atmospheric pressure is about a third of that at sea level, meaning there is about one third the amount of oxygen to breathe.  The air is so thin recovery of bodies has proven impossible – and for many, Everest is where they take their last breath.

Two climbers heard the screams of Francys Arsentiev, an American climber who had fallen after succumbing to snow blindness and found herself separated from her husband.

They were in the death zone, they were low on oxygen, and the woman was on the side of a steep cliff; carrying her was not an option; the trip just to get down to her would be a risk of their own lives. Despite the risks, the two climbers – Ian Woodall and Cathy O’Dowd – climbed down to her and did what they could to give her assistance.

But it was too late.  Ian and Cathy administered oxygen and tended to Fran, but there was nothing they could do. They returned to base camp to seek help and report their findings. 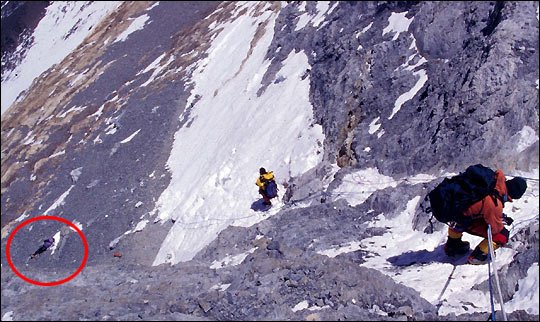 Eight years later the two climbers would return (above). In an attempt to give Francys a makeshift high-altitude burial, they would place an American flag on her body along with a note from her family.

At the time of Francys’ death in 1998, no one knew what had happened to her husband and climbing partner Sergei. He had been climbing with her and had disappeared around the same time; all that had been found were his pick axe and rope.

On the day Francys died, other climbers had last seen Sergei far ahead of Francys on the descent after the two had accidentally become separated. 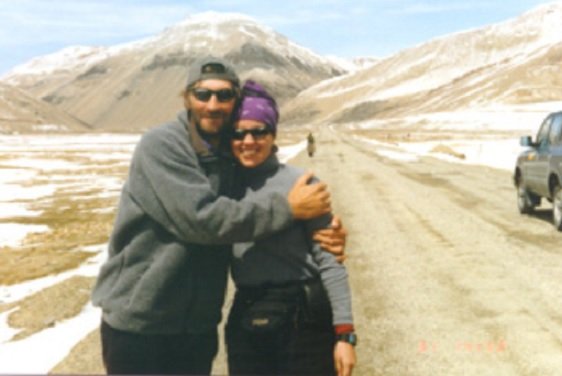 Looking for his wife, Sergei later backtracked toward the summit despite knowing he did not have enough Oxygen to last. His exposure to the harsh conditions on Everest so far had been all he could handle, and he was beginning to suffer from frostbite. Still, Sergei would not leave his wife behind.

Sergei had made his way back to Francys, and descended toward the cliff she lay on as she screamed for help. Sadly, he fell to his death trying to reach his wife.

Possibly the most famous body on Everest is that of “Green Boots” (real name: Tsewang Paljor), an Indian climber and constable with the Indo-Tibetan Border Police. Paljor’s body appeared where it is today on May 10th, 1996.

Paljor was part of a three-man group attempting to be the first Indian team to ascend Mt. Everest from the Northeastern route. Unfortunately for the Indian team, their timing couldn’t have been worse: The weather during the 1996 season was extremely volatile; that year would ultimately become one of the deadliest on record for Mount Everest climbers.

When the storm rolled in, visibility dropped to zero and the temperature dropped. Separated from the climbers in his group and suffering from the cold, Paljor found a small cave and huddled inside for protection from the elements.

It would become his final resting place. (below)

One of the more storied climbers that met his fate on Everest was George Mallory, a famous English Mountaineer.  In 1924, Mallory fell to his death during a storm while attempting to be the first to reach the summit of Everest. His body was discovered in 1999 during the Mallory and Irvine Research Expedition.

Decades earlier, Chinese climbers had reported seeing a “European body” laying face down on a shelf off the main trail. Given the description and the date of the find, experts had always assumed it was the body of Andrew Irvine.

Irvine was a fellow English Mountaineer who had attempted the ascent of Everest with Mallory, and perished in the same storm. 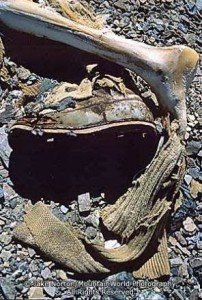 During a 1933 Everest expedition climbers found Andrew Irvine’s axe and rope. Because of this it was widely believed to be Irvine’s body discovered by the Chinese. When a body was found during the 1999 search expedition, it was discovered to be that of George Mallory, not Irvine.

Mallory was found face down in a bunch of shale with his arms spread out and up. His skin was in remarkably good condition, but was tanned from 75 years of sun exposure.

After examining the body experts hypothesized that Mallory’s rope had failed, their hypothesis bolstered by the short severed rope found tied around his waist.

He was also found with a golf ball-sized hole in his forehead, indicating Mallory might have suffered blunt force trauma from striking a sharp rock.

Andrew Irvine has never been found.

Video of the Mallory Body Find on Everest: 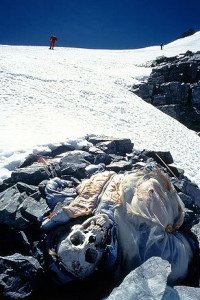 The morbidity of seeing hundreds of bodies along one’s ascent up Mount Everest is only trumped by the fascination of the levels of preservation of many of the bodies.  Everest temperatures are ideal for preservation; perhaps some of these brave souls will be re-discovered by future generations.

The Nepalese consider Mount Everest sacred and do not wish for it to become a graveyard. Parents of some who have perished have asked for the bodies to be left on the mountain, but there is a dilemma as this is against Nepalese law.

As soon as a body can be reached for retrieval, it is and then is brought down for identification and burial. Those too high for retrieval will have stone tombs (also known as “cairns”) constructed around the corpses to shield them from the elements and the view of other climbers.

A few corpses located on shallow ledges were rolled off to be buried in the snow below, away from the trail.

David was an English mountaineer who attempted ascent in 2005. Sharp was part of an organized expedition, but when the weather turned and the group wanted to head back, he instead attempted to push on by himself. He eventually reached a small cave and stopped for a rest.

He froze in place. As he lay near death below the summit, he was reportedly passed by 40 other climbers heading both directions.

Why did no one stop to help? Coincidentally, David stopped to rest in the same cave as Green Boots; one theory holds the passing climbers might have assumed Sharp was Green Boots.

David was eventually discovered by a group of sherpas from a later expedition. During an ascent they noticed Sharp just off the trail, barely alive and offering responsive moaning when queried. However when the sherpas reached David, he was not coherent, badly frostbitten, and only capable of repeating his name and expedition number.

After giving David some oxygen, the sherpas attempted to help him climb down, but in his condition he was unable to stand under his own power. Realizing Sharp was not going to be able to move, the sherpas pulled David into the sunlight, hoping the sun exposure would provide some warmth.

Below: David Sharp’s memorial and Green Boots’ Cave, where David Sharp was found 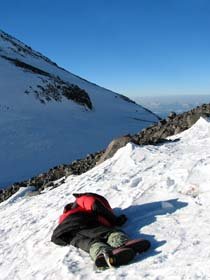 The sherpas left David some oxygen and a blanket and quickly retreated to basecamp to report their find. By the time they returned with help, David was dead.The sherpas were heroic in the inclement weather, brave enough to return while others retreated – but it was already too late when they first found him.

Sharp was last seen alive by a documentary crew following double-amputee Mark Inglis during his climb. The crew were had cameras rolling when they approached David, and the footage was used in the resulting documentary (see below).

“Dying for Everest” – a short documentary outlining the David Sharp case including video of Sharp next to Green Boots:

Some die in their sleep, some fall unconscious and freeze, while others (including those who fell or became injured) were left to die slowly of hypothermia.  Until recently, the statistics were nearly one in four climbers dies attempting to reach the summit.

Advancements in technology and experience have led to a better survival rate of climbers. As of 2011 about 1,000 climbers a year attempt to reach the summit, and on average 15-20 perish.

Expeditions are the primary source of income for Nepal, and licenses to ascend start at around $25,000.

If you have lesser experience and want to ascend with an experienced group, several companies will lead you to the top with a team of sherpas starting around $40,000 per person. 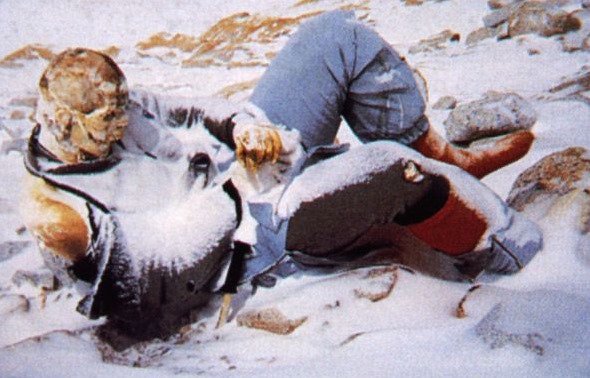 Video clip of a discovered body:

* May those who have perished on Mount Everest rest in peace. *